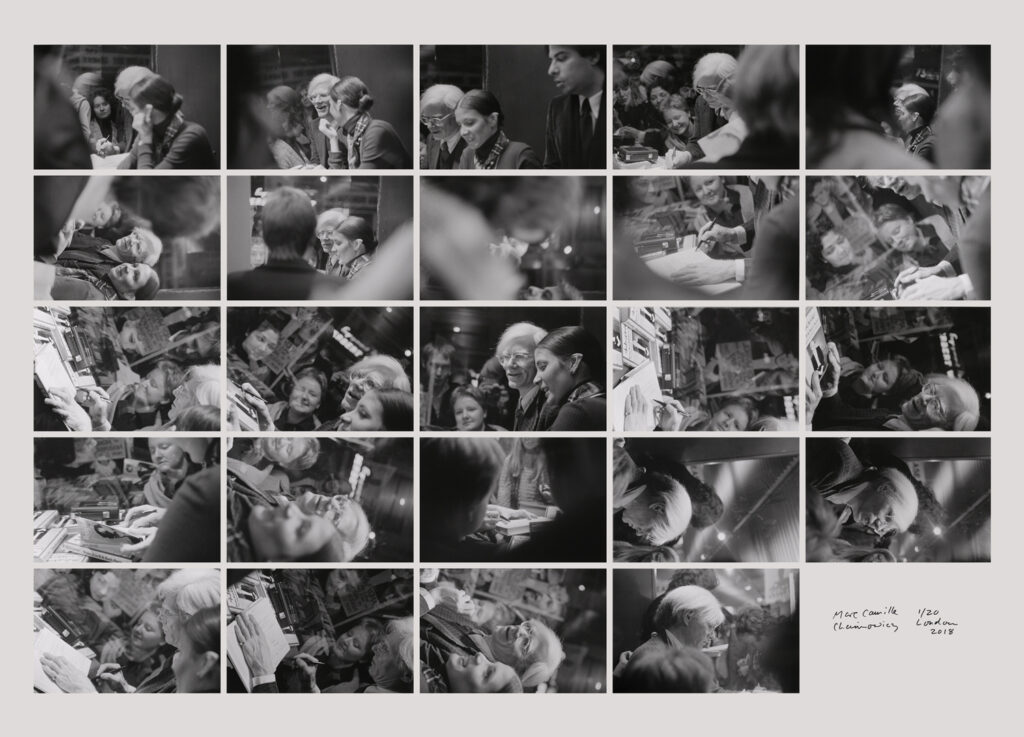 This edition is composed of images that Chaimowicz took in 1975 of the artist Andy Warhol signing copies of his iconic text, The Philosophy of Andy Warhol (From A to B & Back Again). Chaimowicz, then a recently graduated art student, had heard about Warhol’s book signing at Foyles Bookshop, and decided to attend to pay homage to one of his heroes. On arriving at the store, Chaimowicz was met by throngs of like-minded attendees, queuing out of the door and up the Charing Cross Road. In the line, Chaimowicz began critically questioning his actions and, feeling disgruntled at the parasitic nature of fandom, turned on his heel before entering the building and without meeting Warhol face to face. However, as was the norm for the artist, Chaimowicz had been taking photos on his Olympus OM-1 during the wait.

Forty years later, Chaimowicz chanced upon an undeveloped role of Ilford 400 film, the developed results are the images that we see combined here. Produced as a traditional silver bromide print, the enlarged contact sheet envelops the viewer, prompting a visceral response. Physically glossy, as Warhol himself was, the material qualities of the work communicate the essence of the era during which the photos were taken and the circumstances of their capture – through the store window. Recording, almost romantically, the action of Warhol signing his book, alongside the adoration of his fans, the edition communicates the disquieting position of the voyeur, the silent, all-absorbing watcher. Warhol, a famous voyeur himself, is here out-voyuered by Chaimowicz.

Capturing an iconic moment in art history, the edition will be accompanied by a publication of the same title, which is to be launched at Paris Internationale, 2018. The images will also be used in a future exhibition to be produced by Chaimowicz in 2020 at ICA, London.

Marc Camille Chaimowicz established himself in the 1970s with his evocative installations and performances. His installations have often included the artist’s photographs and his prototypes for fabrics, wallpaper and ceramics, as well as found objects and artworks by others. His work combines a sensitivity to the personal and the everyday with a highly developed sense of theatre and lifestyle.

Other works by Marc Camille Chaimowicz