Since the 1990s, Lily van der Stokker (°1954, Den Bosch, NL) has been internationally known for her playful drawings and murals in bright colours. Van der Stokker’s cheerful drawings are made in bright or pastel colours. She often draws motifs such as flowers, curls and clouds. Van der Stokker combines these shapes with words or sentences that are very recognisable. Because of this combination of sweetly coloured shapes and short pieces of text, her works of art seem very easy and accessible. But that is only an illusion. In her own words, she makes ‘difficult art that looks easy’.

In terms of form, Lily Van der Stokker, with her colourful flower and cloud decorations, is indebted to Pop Art. And through the use of text in her works, her practice is strongly rooted in the tradition of the conceptual art of the 1970s by, for example, Joseph Kosuth, or Lawrence Weiner. In a similar way, the text speaks directly to the viewer, but Van der Stokker asks very different questions than her (male) art historian predecessors.

In a conversation with filmmaker John Waters, Van der Stokker said of herself: ‘I am a feminist conceptual pop artist.’ This feminism is not only expressed in the content of her text and the questions she asks, but also in the forms she draws. Van der Stokker very consciously plays with a visual language that the intellectual art world labels as decorative, girlish (and therefore silly) or even childish. Critics did not consider her work serious; it was seen as too positive and too decorative. These cheerful drawings could not be art. 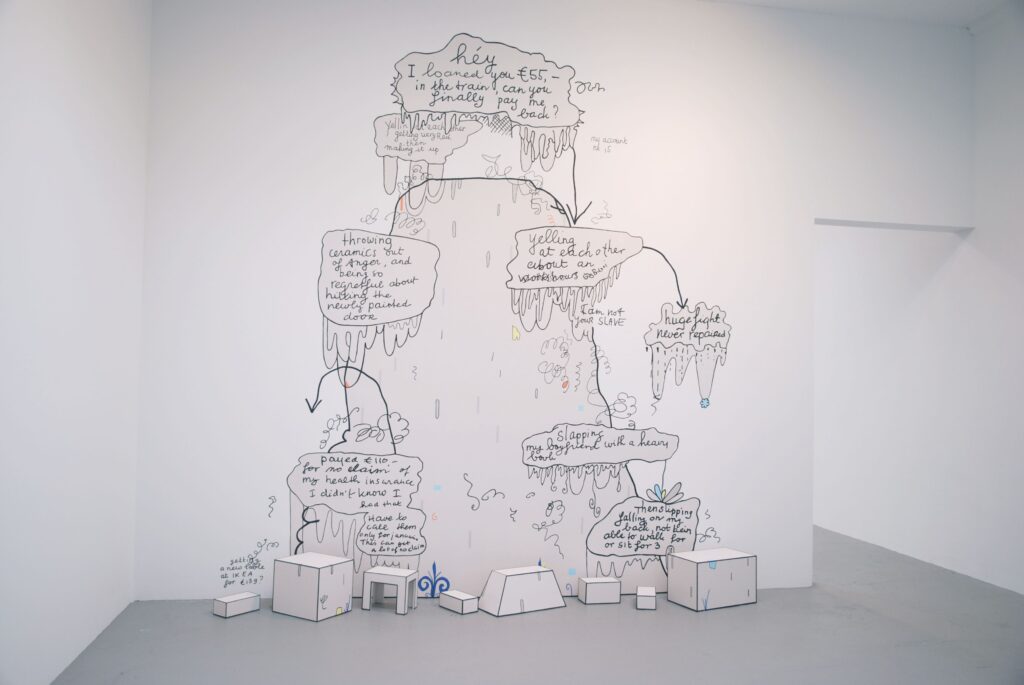 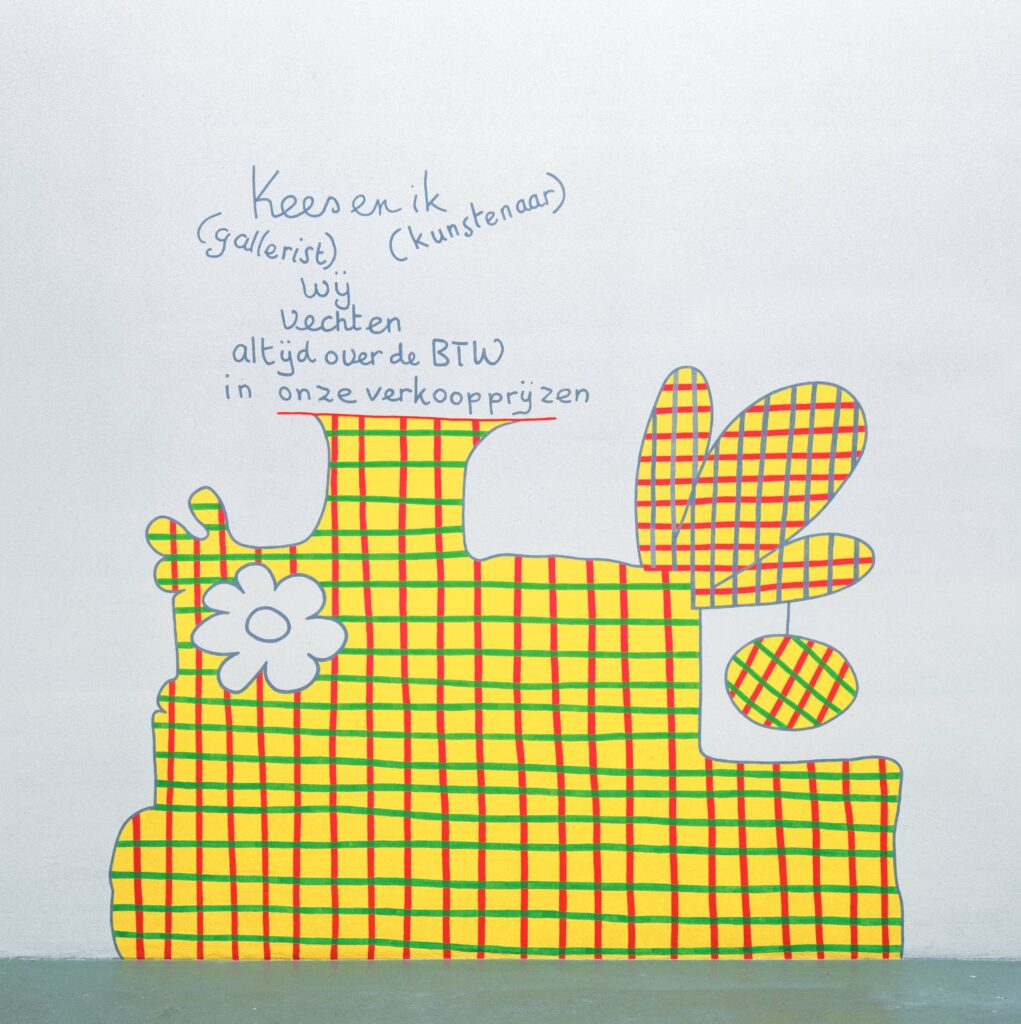 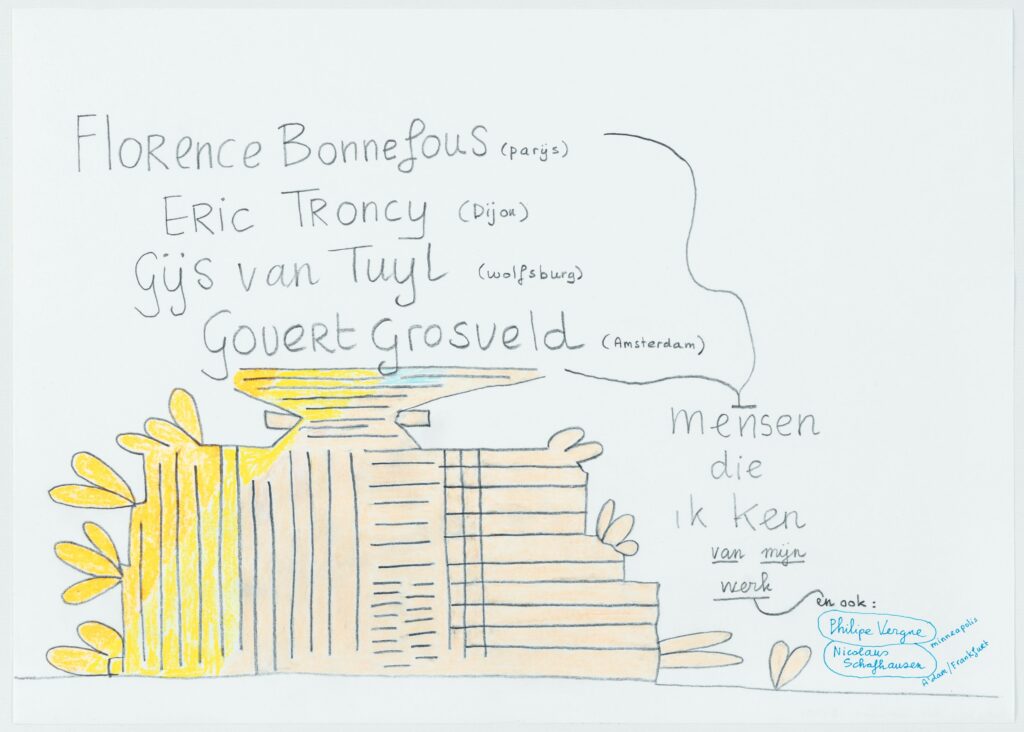 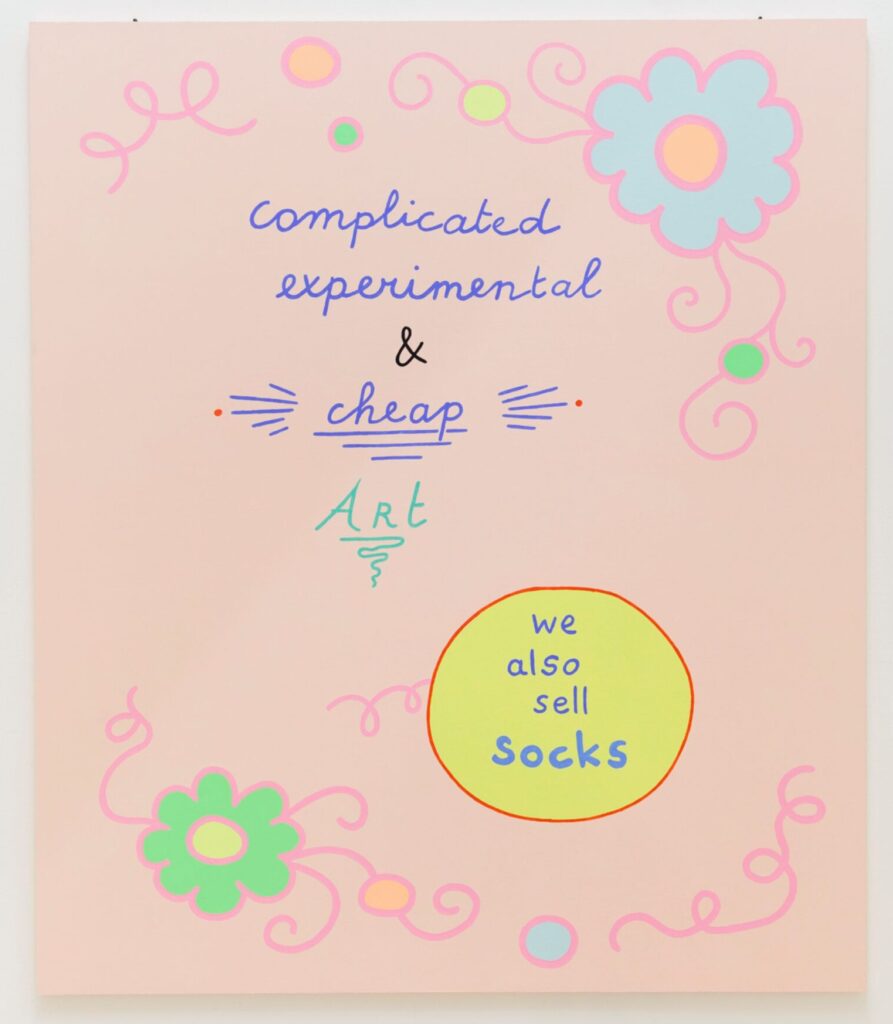 Van der Stokker’s work is particularly layered. She is familiar with art history and visual culture, and playfully bends them to her will. The abstract forms she draws almost become characters with their own identity through the accompanying text. She has a distinctly female perspective and uses her works to illuminate a number of issues that are not adequately discussed in male-dominated art history. Themes such as gender, care, beauty, friendship and domesticity have run like a thread through her work for over thirty years.

Her work speaks about art but also about the economic laws of the art market and the mechanisms that lie behind them. Just think of texts like; ‘good old abstract art’, ‘don’t worry nothing will happen’ and ‘I am an artwork and I am three years old’, but also; ‘Interesting work. It costs around $15.000,- but wall paintings are hard to sell’, or ‘Kees (gallerist) and I (artist) we always fight about the VAT in our selling prices’. These amusing details about the mutual relationships in the art world also challenge the romantic image that exists about the life of an artist.

Lily Van der Stokker’s work pays great attention to human relationships and to the social context of the art world. Works such as ‘People I know from my work’ or the text ‘All my no-baby friends live in New York.’ show how work and life are intertwined. The artist also focuses on elements of daily life that are never shown in a work of art – like cleaning the kitchen. But also everyday worries find their way into her work. The Rent’, for instance, shows an overview of monthly rent and her costs for electricity and gas.

Time and age are also addressed in Van der Stokker’s works. Lily and Jack have been living together for 10 years now’ or ‘My mother is 84, I am 42, My boyfriend is 59’. Now that she is in her mid-sixties, the subject of getting older comes up more often. But as always, this is also done with the necessary dose of humour – like her work ‘Age 65.75’, which lists the names of all the doctors the artist sees, and which body parts they treat.

The work Lily van der Stokker is showing in our Billboard Series is based on an older drawing she made in 1992 with felt-tip pen. There is no better way to interpret her thoughts and ideas about this work than to let her speak for herself. Van der Stokker has been working for some time on an archive in which she interprets all her work herself. Below, we give you the full text she wrote about her drawing ‘Nothing Really’.

“Nothing Really” I made In the same time that I was making and designing the wallpaintings and drawings “Wonderful”, “Friendly Good”, and “Kissy”. Thrilled by my new subject matter: optimism and pleasure through color,
I had other subject matter connected to it: flattness, cheapness, meaninglessness, the decorative, all represented by the flower icon. The low status of it was clear from the very first flower I ever used in one of my first wall paintings: critique I got, remarks, bad reviews. Clearly the flower was a forbidden visual element, at least in the way I used it. But then the low status also attracted me. If something really means nothing or has no content then what a pleasure to mention exactly that: “Nothing really”. That was enough for me. Simple decorative colorful fun. And the statement in itself enough to think about. And wether this artwork here really means anything or doesn’t, does that matter? I think it represents for me the true power of pleasurable superficial decorativity. The valueless here is emphasised.

I think the drawing was first exhibited in my gallery in New York “Feature” in ‘92 and in the same time an article came out. My artist friends came to me saying: “Hey Lily, here you are in Artforum !”. That was a big deal. The article was written by Bob Nickas and Michael Corris.

The title of the article was “Punishment and Decoration / Art in an age of militant superficiality”, (Artforum, April 1993 p.78-83). Very interesting article about painting: the figure, the ground, the grid, the monochrome, the all over.
About how artists have treated, used and misused, ‘punished’, the canvas: splattered on it (Pollock), slashed holes in it (Fontana). Simplified and flattened it to a simple grid: Peter Halley with “Nirvana”, and me with my “Nothing Really”; my image in the article was used as a decorative background for other art to be put on. And all the other artists in this article: Rudolf Stingel, Ad Reinhardt, Michael Scott, Dan Walsh, Yves Klein, Imi Knoebel, Steven Parrino, Lucio Fontana, Silvie Fleury, Lisa Ruyter, Jutta Koether, Moira Dryer, Joan Wallace, I realise now I was in this article with a group of several big male and female names, a group that I admire, representing the artworld and shaping the history of painting of that time.

As a follow-up on this article, not much later Michael Corris invited me to an exhibition with the same name:”Punishment and Decoration“, in a gallery (Hohental und Bergen, 1994) in Cologne. Here he combined background and foreground artworks. I designed a quite large “Thank You Darling” all over flower wall painting that covered half the gallery and on top of the wall painting he hung a Peter Halley, a Michael Scott and an Imi Knoebel. The text “Thank You Darling” was clearly readable in the middle of the flower wall piece and right below the abstract artworks. To see simply the word “darling” next to these masters of abstraction was a thrill.
The concept of hanging artworks that close together or on top of each other had quite a few follow exhibitions, by other curators, and in my own work. And using the words “Thank You” I found so powerful, that it made me create a whole series of Thank You wallpaintings in the following year(s)