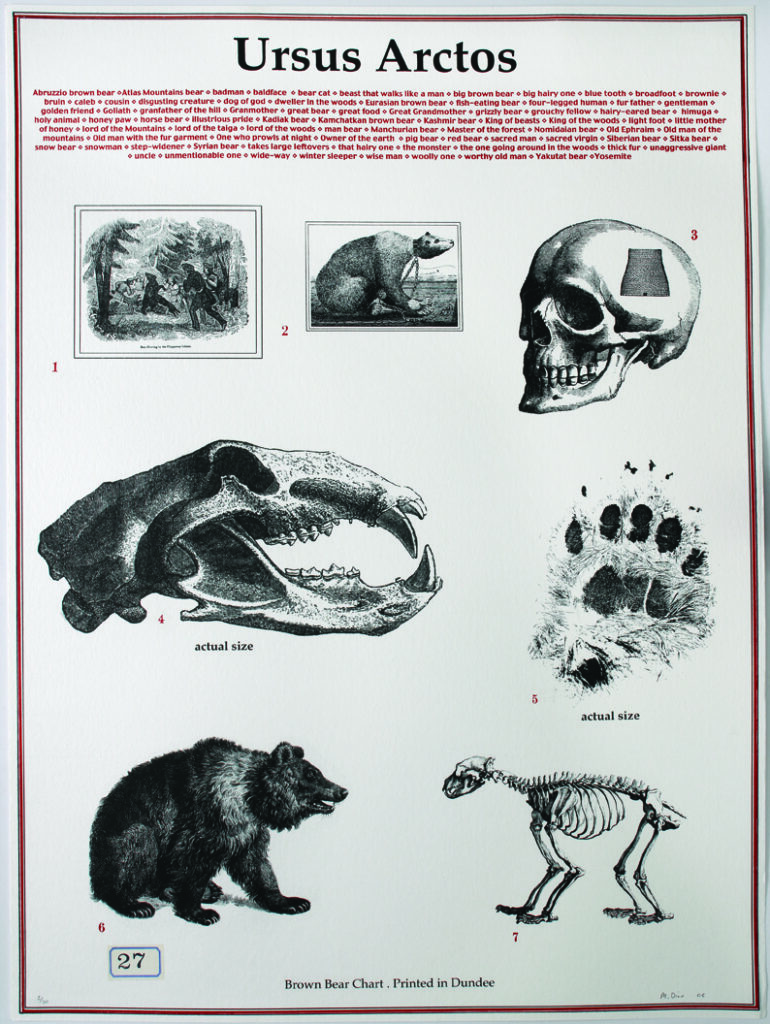 This edition is published by DCA

In 2005 Mark Dion was commissioned by Dundee City Council to carry out a project on the re-development of the bear enclosure at Dundee’s Camperdown Wildlife Centre. Dion is best known for large-scale projects that cause us to re-examine classification systems and labels used by specialists such as curators, archaeologists or ethnologists to explain our material culture. Working collaboratively, he represents his findings in a way that allows viewers to actively question such systems with fresh objectivity.

At the Camperdown enclosure, which is home to two European brown bears, Dion created an installation in the form of a circular stone ‘broch’ and exhibited found artefacts offering a history of our changing cultural attitudes to the brown bear. During DCA’s 2005 exhibition Our Surroundings, Dion exhibited his plans, drawings and a model of this collaboration.

This striking large-scale print based on the Camperdown project was created in the Print Studio at DCA. Styled on an old French educational poster, it comprises selected reproductions of antique engravings which chart perspectives relating to the history of the Camperdown site and the brown bear. During the move of the Camperdown bears to their new site, keepers captured a paw print to add to the chart. Posited alongside the artist’s collection of associated texts, these images generate uncertainty rather than an educational assertion: a forum for the re-examination of our past and present narratives.

For over twenty years, the repertoire of American artist Mark Dion has included staged workbenches, dusty storage vaults, stuffed bears, and tarred birds. Ostensibly, his installations, interventions, performances, and photographs critique humankind’s often cruel treatment of nature. However, the artist also demonstrates that “nature” is a mere construct that is constantly being reshaped and reinterpreted.

Dion’s current project, Concerning Hunting, examines hunting as a traditional, but controversial, cultural practice. One of the fascinating things about hunting is its fundamental contradictoriness: the sensitivity of the hunter and his profound knowledge about what nature requires are also expressed through the act of killing animals. Dion’s artistic examinations do not focus on nature as such, but rather on the hunt as a way culture deals with it.

Mark Dion is represented by the following galleries;
click through to see more of his work.

Other works by Mark Dion

Emanations Of the Earth