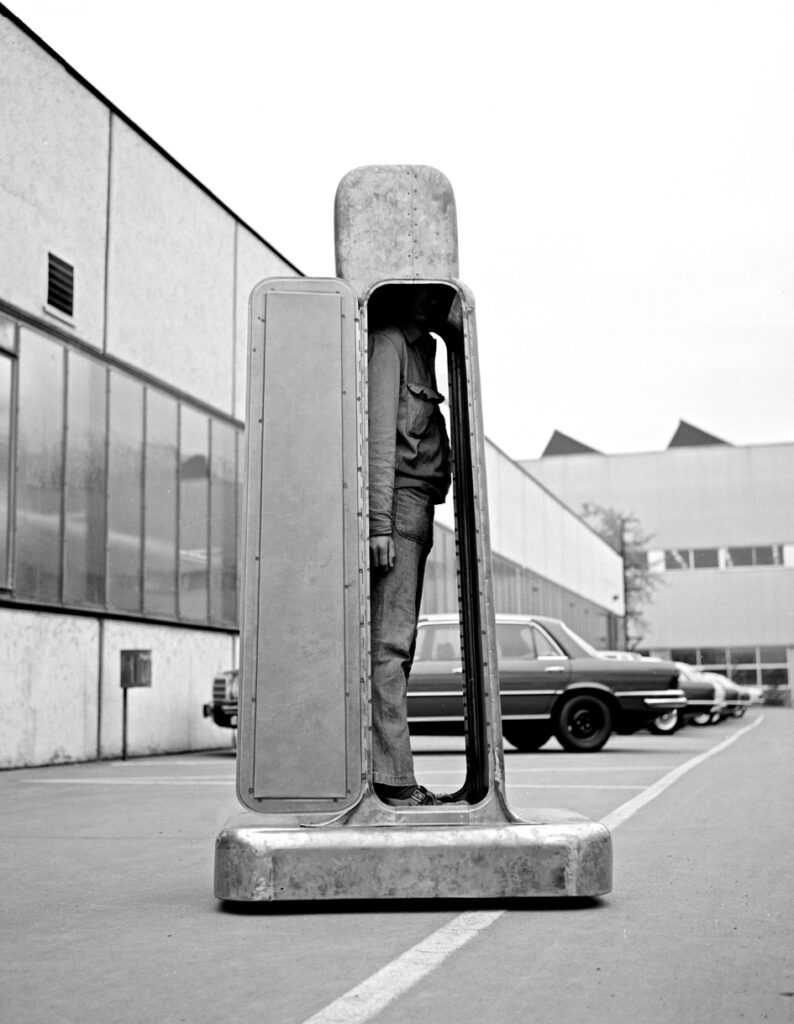 Edition of 25 copies, signed and numbered by the artist.

This edition is published by Galerie Thomas Fischer

Kabinen-Mobil, Stehen (Arbeitssituation) (1973/2014) refers to the “Kabinen-Mobile“, which Joachim Bandau presented in the ‘Utopian Design’ section of documenta 6 in Kassel in 1977. These wheeled objects moved independently, driven by windshield-wiper motors; their forms derived from abstractions of bodily postures like sitting, standing, or reclining. Bandau had developed these sheet-steel sculptures during a 1973 residency at Mercedes-Benz in Sindelfingen.

Joachim Bandau belongs to an important group of German artists, along with Gerhard Richter, Joseph Beuys, and Imi Knoebel, who came out of the Kunstakademie Düsseldorf in 1961. Since the late 1960s, Bandau created a series of mobile sculptures, which resemble a hybrid of man, machine, and design-object. In his following sculptures, he continued to refer to the human condition and form, along with Germany’s complex post-WWII re-invention. Another important part of Bandau’s artistic practice is his lacquer works and his black watercolour paintings, both exploiting the principle of layering.

Joachim Bandau has had numerous solo exhibitions, including shows at Museum Ludwig, Cologne; Neues Museum, Nürnberg; and M HKA, Antwerp. His work has also been shown in several major group exhibitions at venues such as the SculptureCenter, New York; Hamburger Bahnhof, Berlin; and Haus der Kunst, Munich. He has also shown several works at Documenta 6 in Kassel in 1977.

Bandau’s work is present in many important public collections, such as Kunstmuseum, Basel; Staatliche Kunstsammlungen, Dresden; and Museum Ludwig, Cologne.

Joachim Bandau is represented by the following galleries;
click through to discover more of his work.

You can also find more works by Joachim Bandau on his own website.

Other works by Joachim Bandau