Between 13 and 18 September the fifth Berlin Art Week takes place. With a program of over hundred events, two art fairs, nine private collections, a thirteen-hour film program, several art prizes, the end of the 9th Berlin Biennale, a large program of project spaces and gallery exhibitions opening around the city, it’s hard to know where to start.

In this post we are listing seven gallery shows that we think you should try to see. Some opened last week, others will be opening Friday night 16 September at 18h. Also have a look at our separate post in which we advise which institutional shows and collection presentations to see during the Berlin Art Weekend. 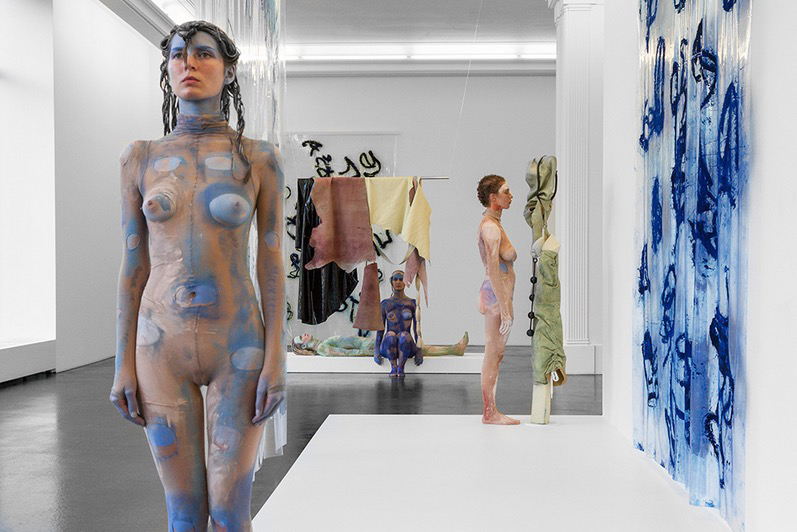 For Donna Huanca, the body and skin are an ongoing focus and she employs them as both pure surface and material. Cosmetics function as a medium of transformation and performers are painted from head to toe. They are choreographed to move glacially, in a meditative state, through her installation environments which consist of paintings, sculptures and ephemera. The performers’ presence both activates Huanca’s studio works and relate to dissimulation, fusion, and camouflage, furnishing the beginnings of a poetic narrative on the fragmentation of identity. Huanca’s Skin Paintings combine documentation of past performances, overlaid with thick, gestural painting created in a trance-like state. On their own, they exist as microcosms of performance, incorporating both images of the body and are overpainted with pigment camouflage. Within the context of this larger installation, the Skin Paintings create both points of reference and architecture for the performance. 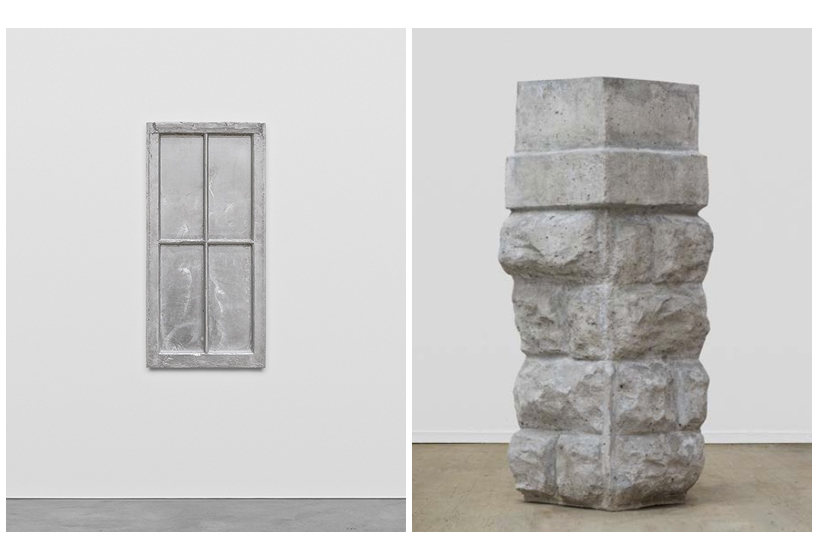 This is already Ugo Rondinone’s fifth solo exhibition with the gallery. Rondinone has modified the exhibition space to create a self-contained environment: new walls cover the existing windows. The works themselves index architectural barriers between outside and inside – a monumental new series of aluminum-cast windows, a large-scale brick-wall painting and a new series of concrete sculptures cast from the corners of urban buildings – collectively comprising the space of an inner world. The exhibition title is taken from  a  painting  by  Caspar  David  Friedrich,  manifesting Rondinone’s long-standing indebtedness  both  to  the  iconography  and  philosophy  of German  Romanticism.  Rondinone says of this: “The  German  Romantic  movement was the first to blur the line between reality and illusion. In this sense I’m very attached to the idea of art and art-making as an environment that is itself outside of time and inaccessible to a linear logic.“ 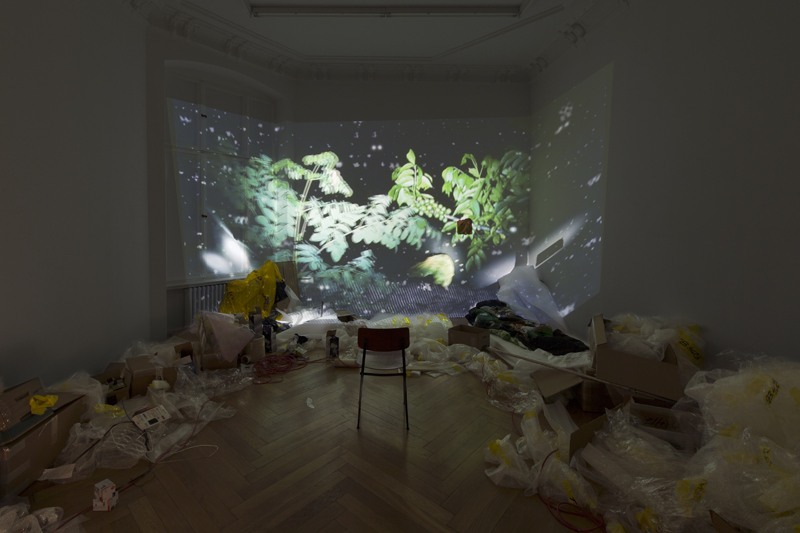 Trisha Baga combines video, ceramics and found objects in immersive compositions that flood spaces with light and sound. Through 3D projections and the rhythms of online browsing she produces installations that suggest shifting chains of association. Baga positions herself as a material through which information is filtered – with the contents of her studio, apartment and computer spilling out into the space of the viewer. Baga’s environments are overwhelming, with maximal arrays of information being emitted by screens and sounds and objects. “My stuff is about transitions,” she says. “It’s about different layers and mediums touching each other, like different bodies. A painting is an object; it’s really resolute. But a projection seems sexual,” she adds, “like it’s licking and wrapping itself around everything. I think there is something very romantic about that.” In the accompanying exhibition text, artist Helen Martin goes further: “In LOAF, inside and out, skin barriers and seams are deliberately confused. In the same way that mould might ravage a slice of bread, screens and ceramics ooze with an implied sense of microbial growth, alive with all the exhaustive permeation of the pathogen.” 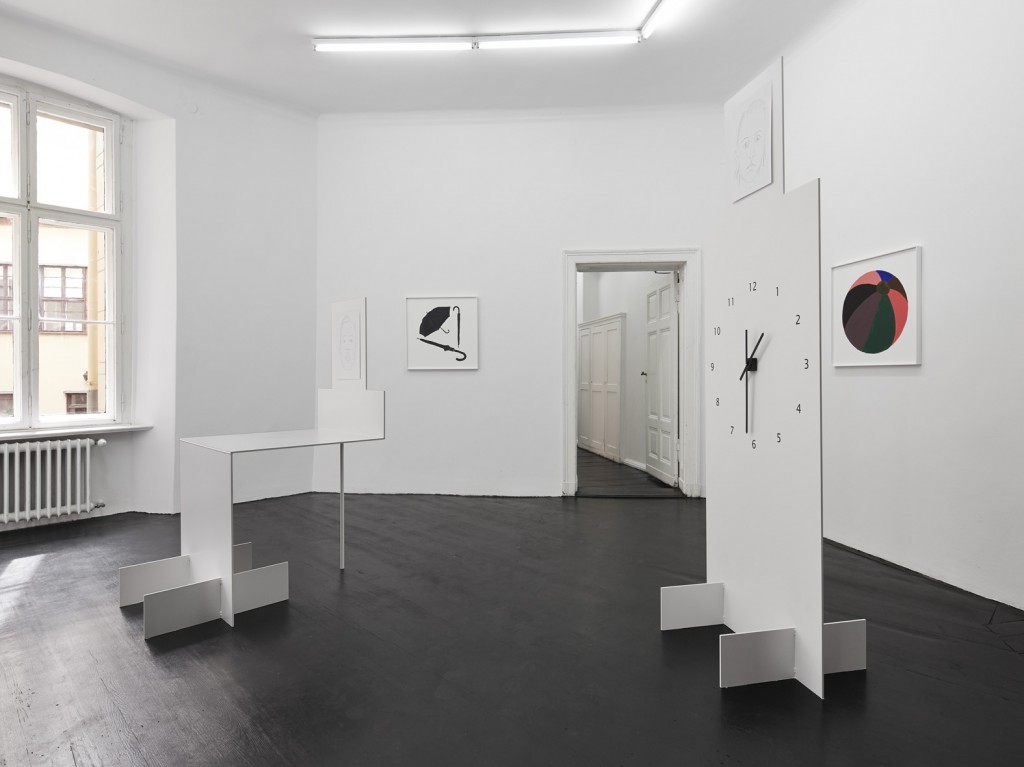 Central in Pantelleria is Jos de Gruyter & Harald Thys’ Die aap van Bloemfontein. This 2014 video is featuring a group of static figures in a bare set of blank but colourful walls. In Afrikaans, a computerized voice narrates a story of impossible and exuberant transformations—a computer becoming a lawnmower becoming a television, for example — with deadpan indifference. This video is combined with a selection of sculptures – new versions of their White Elements – that are sculptural simplification of bodies, like stick figures with pencil drawn faces copied from the internet. Incorporated in these bodies are measuring instruments, as if they are also transforming into something impossible.

This exhibition focuses on Joachim Bandau’s ‘Bunker Drawings’, historical works that were made between 1976 and 1978. These drawings marked a shift in Bandau’s practice, steering away from the surreal figures of the 1960s and inauguring an intensive examination of the subject architecture. The large-scale drawings are dark, shattered by war memories, and make the frightening monumentality of the bunker tangible.

In terms of their form, Joachim Bandau’s bunker drawings are both surprising and fascinating. Conceived as a ‘survival machine“’ as both foxhole and firing range, the bunker in Bandau’s drawings is more than a prototype of instrumental architecture. It appears as a contradictory hybrid, archaic and yet modern. In reality a kind of fortification, Bandau’s bunkers are like sculptures with strange anthropomorphic features.

This is Yves Scherer’s second solo with the gallery. This show sees a development of Scherer’s sculptural language away from the statical and a continuation of his thematic interest in the porous boundaries between the media, virtual space, and everyday life. Oscillating between recollections from his own personal life and common projections, the exhibition is less a take on celebrity culture but a much more intimate and personal reflection of the concept or state of the person as a single. With an invitation image featuring the artist in the pose of a model, the show is as much take on the role of the male in our society as it is a play on the selfie culture of dating platforms and social media, using the exhibition itself as a medium to find a prospective new partner.

Marianne Vlaschits – A Disturbance Traveling Through A Medium at Duve Berlin 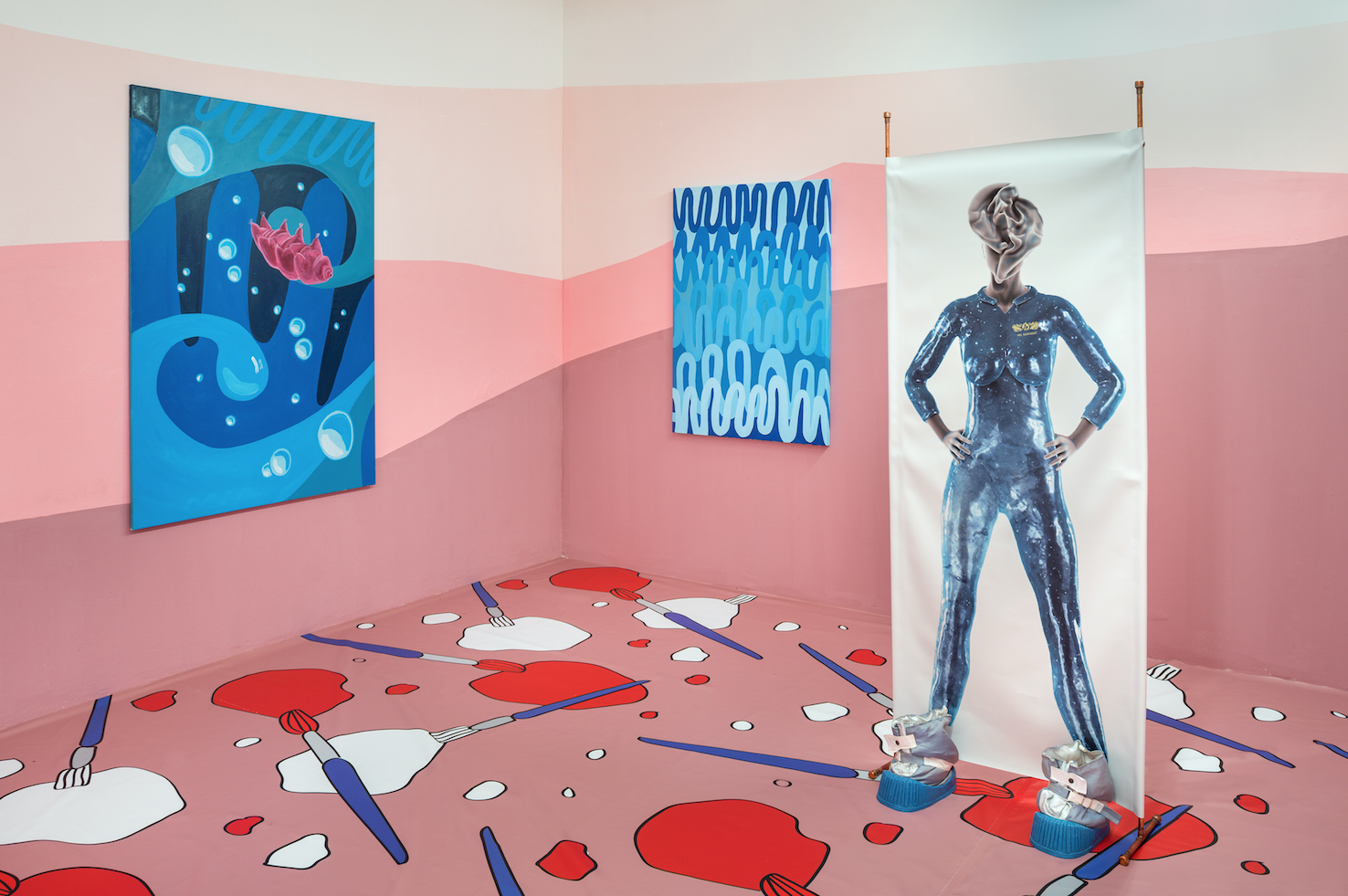 Marianne Vlaschits’s exhibition offers us a social system based on the new cosmos. Here females hold primary power, predominantly through travel, political leadership, moral authority and social privilege. Culture is of paramount importance in this new world, and is maintained by space travel. Vlaschits turns the gallery into a blueprint for an interstellar spaceship, designed for comfort. She also extends its users’ ability to travel via a mind-altering digital video that plays with the effects of a powerful psychedelic compound. Marianne Vlaschits’s radical solo female commander narrative offers a disturbance in the systems of patriarchy – leaving behind the macho male and his binary tech gadgets.

This exhibition is opening on Friday16 September at 18h.