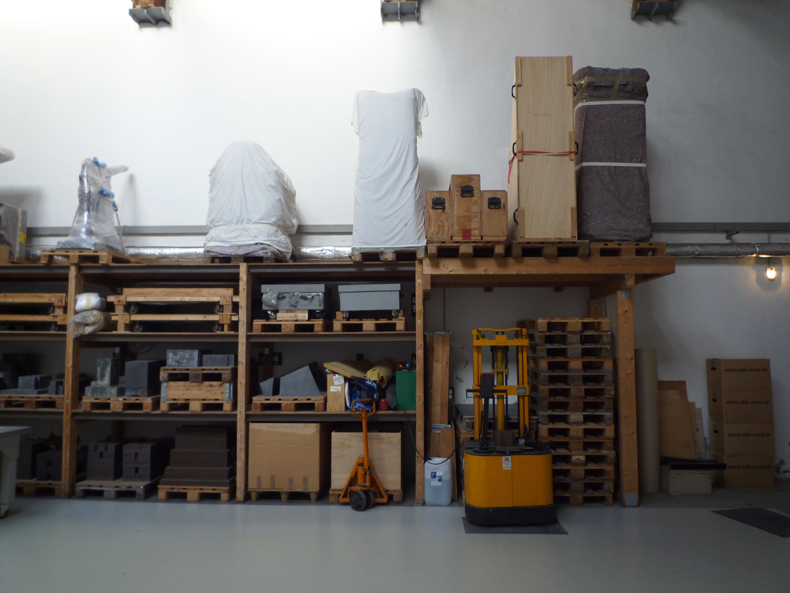 The grand studio of 79-year-old artist Joachim Bandau (°1936, Cologne) lies in Haaren, a little town just outside of Aachen, which in its turn is primarily known for the monumental cathedral whose origin goes back to the 8th century. What used to be the biggest dance hall in this area a few decennia back, now mainly serves as a warehouse for the sculptures the German artist has made between 1967 and 1974. When we enter the hall with the original wooden ceiling, six of the futuristic-looking creatures are presented in an intimate set-up, ominously looming from within the strikingly clean and museum-like surrounding. Another part of the sculptures is neatly stocked on palettes against the wall, covered with white sheets.

At first sight, most objects seem oddly designed household apparatuses (such as showers or vacuum cleaners) and reminisce the 1960s and 1970s in terms of shape and material. Despite the fact that they were made fifty years ago, these surreal combinations of anthropomorphic and machinelike forms emanate a refreshing and ‘contemporary’ atmosphere. With titles as die Späher (The Spy) (1974) or Silbernes Monstrum (Silver Monster) (1970-71), one can subtly notice the strong impression war and its aftermath have left on Bandau. With Lenkbarer Genosse (Steerable Comrad) (1971), a white lacquered shape including handgrip and wheels, Bandau even satirises socialist ideologies. About the impending appearances of his creations, he states the following: “Every time I’d finished a sculpture, I had the habit of putting it in my living room so I could live with my ‘baby’, but already during the first night I was afraid of the anonymous figure that was standing right in front of me.” 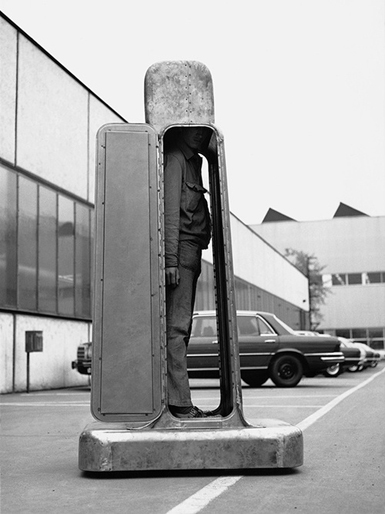 Slowly but surely, Joachim Bandau is regaining public attention, after his work had been shown widely from the 1970s until the 1990s. Apart from major solo exhibitions at M HKA in Antwerp (1990) and Museum Ludwig in Cologne (1996), he participated at documenta 6 (1977) in the ‘Utopian Design’-section with his, now mythical, Kabinen-Mobile (mobile cabins). Inspired by bodily movements like sitting, standing, or reclining, these wheeled objects moved independently, powered by windshield-wiper motors. Bandau had developed these sheet metal sculptures during a 1973 residency at the Mercedes-Benz assembly plant in Sindelfingen, a town near Stuttgart in south-west Germany. A few years after the major documenta-exhibition, Mercedes-Benz let Bandau know that all of his Kabinen-Mobile, which were stored at the factory, had been accidently destroyed, leaving the artist only with pictures of this unfortunate ensemble.

At a certain point during the 1970s, Bandau radically stopped making these humanoid sculptures and dedicated himself exclusively to the designing and constructing of metal models of bunkers. Strongly influenced by the book Bunker Archaeology (1975), wherein the French cultural theorist Paul Virilio writes about the bunkers he photographed along the French Atlantic coast, Bandau became instantly fascinated by this minimalistic, functional type of architecture. The German artist, who was born just before the start of the Second World War, is especially interested in the bunkers in France, Belgium and Germany, designed by young Bauhaus-architects chosen by Adolf Hitler to develop the impregnable yet aesthetic structures. This body of work is twofold: apart from the metal bunker-models, Bandau also made a lot of small collages and large drawings in the late 1970s, depicting similar architectural structures in a very obsessive manner, occasionally in combination with historical pictures of war strategies. As such, these works, as well as the humanlike sculptures from the 1960s and 1970s, both refer to the war – one work more explicitly than the other –, and also imply futuristic quality.

Another important part of his oeuvre is Bandau’s black watercolours and lacquer pieces, which he still makes today in his bright and loft-like studio on the first floor. There, hanging on the walls, we see African masks and ritual objects Bandau has collected over the past years. Next to these objects, he has mounted his lacquer pieces, so that the work not only reminisces eastern cultures through its shape and appearance, but also shows affinities with the watercolours through its different layering of shadows on the wall. At first glance these watercolours seem to be minimal drawings made in pencil, but they are in fact lines that were constructed by the encounter of two extremely lightly applied black surfaces.

Joachim Bandau, who came out of the Kunstakademie Düsseldorf in 1961 along with Gerhard Richter, Joseph Beuys and Imi Knoebel, has established an extended and varied, yet very consistent body of work since the end of the 1960s. Later in 2016 he will have an exhibition at the New Museum in Nuremberg, focusing on his early sculptures.

Images courtesy of the artist and Galerie Thomas Fisher, Berlin.