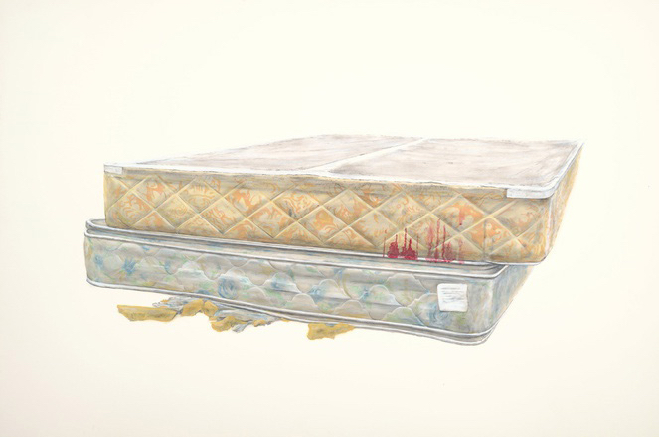 Edition of 125 copies, signed and numbered by the artist

Ed Ruscha’s career-long exploration of horizontality has included compendia of the buildings of urban Los Angeles, word paintings, photo books, and prints running the full gamut of his readymade subjects, all of which highlight his admitted fascination with the language of landscape. The mattress is a particular kind of landscape, though; a decidedly horizontal object and one that supports both physically and psychically, engendering the production of those imaginary landscapes called dreams.

In his recent series, Metro Mattresses, Ruscha has produced an intimate portrait of a certain kind of dream, now encountered as a discarded object tossed out onto the street, which Ruscha photographed and then translated to the flat two-dimensional plane. What type of landscape is this mattress set? A clue is given by the reversal of the usual order of things – box spring on top of mattress, bloody smears moving against the laws of gravity. Beneath the transparent fabric cover of the box spring, we see what looks like a picture frame, or a cross – both sights of imaginary projection. In Ruscha’s exacting image, who could blame us for believing that maybe there really is no difference between the two?

One of the most important postwar artists, Ed Ruscha came into prominence during the 1960s pop art movement. Ruscha’s works function as alternatives to mass-media depictions of life in Los Angeles and on the West Coast.

His early interest in commercial art and work as a graphic designer and layout artist for an L.A. advertising agency, as well as his distrust and frustration with the traditional hierarchies of painting and sculpture led him to create works that challenged prevalent styles such as Abstract Expressionism. Resisting the labels of Pop or Conceptual artist, Ruscha nevertheless incorporates elements of both movements into his paintings and photographs, and his work influenced the development of later Conceptual art in the United States, serving as a forerunner to that of practitioners as varied as Bruce Nauman, Robert Smithson, and Lawrence Weiner.

(courtesy of the Guggenheim museum)