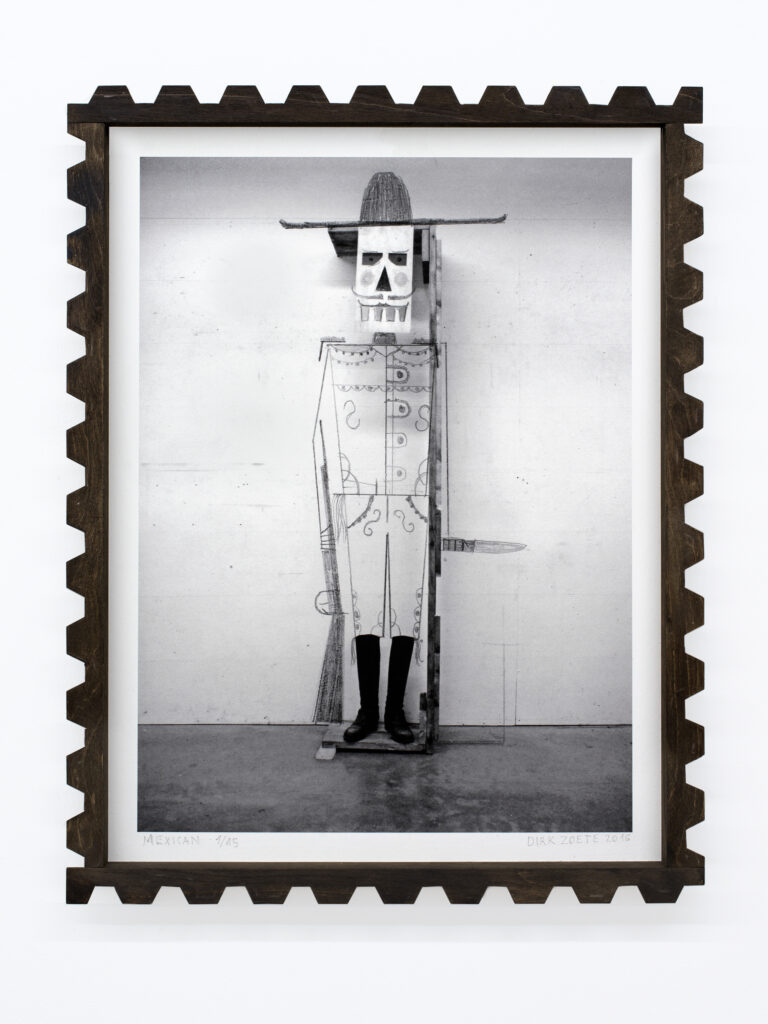 Print on Hahnemühle Photorag 308 gram in an artist frame

Mexican (2016) was published on the occasion of Quatro Grãos, Dirk Zoete’s s proposal for Billboard Series. This long-term art in public space project in Ghent was initiated by artlead in September 2015. Each year, four artists are invited to create a work that considers the status of the image and fosters a productive dialogue with the surrounding neighbourhood and urban landscape. The presentation of each new Billboard will be accompanied by an edition.

Both Quatro Grãos and this edition are drawings made on photographs of earlier setups in his studio.
This edition comes in a special artist-made veneer frame.

The artistic practice of Dirk Zoete is circular. He makes models, photographs, drawings, sculptures and installations, all resulting from and influencing each other. A model set sometimes becomes a drawing, which might result in a large sculpture, which in its turn can function as an element in a larger installation or a prop in a new photographic series.

A term he often uses himself for this practice is Brincadeira, the Portuguese word for ‘play’. Dirk explains: “ It’s a term I picked up from a Brazilian who helped me out around my studio. I initially thought the term referred to ‘do it yourself’, comparable to the Dutch term ‘bricoleren’. I was wrong, but immediately felt attracted to the tension between the do-it-yourself aspect and the idea of play. I now use it as an umbrella term for my practice: all models, decors and theatre scenes I use for my photographic series, the drawings I make, which are either based on or literally drawn on the printed photographs, the sculptures that come out of this process; etc.”.

Dirk Zoete’s practice, though theatrical, has little to do with theatre. He rather investigates how a situation can come into being, how his studio can function as a pedestal for new situations. The driving force behind his work is wonder. By creating images, sculptures and model settings of things he never saw before, by adding something new to the world, Zoete gets the momentary pleasure of wonderment.

Other works by Dirk Zoete