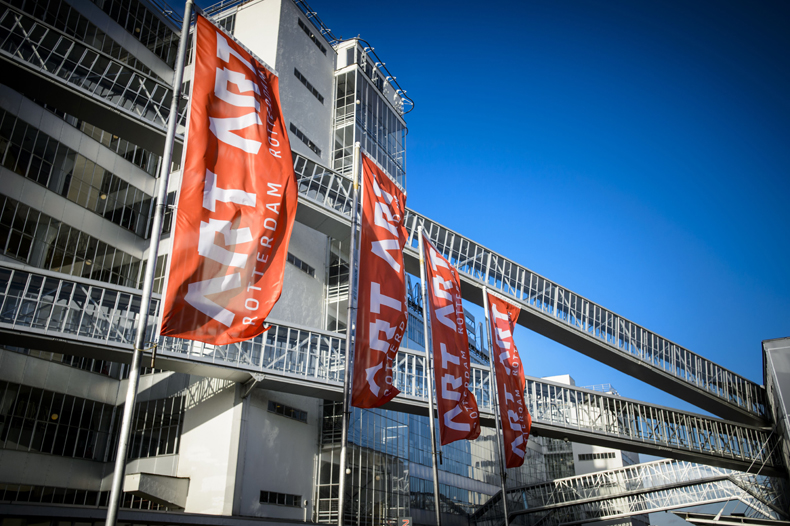 Art Rotterdam opens a new season of art fairs across Europe, with Arco Madrid later this month; Milan’s MiArt, Art Cologne and Art Brussels – and Brussels’ newcomer Independent – in April; and Loop Barcelona, Liste and Art Basel in June. And in between the Armory Show, Frieze NY and the Dallas Art Fair – among others – are taking place across the Atlantic. Of course, there is more to art then fairs, so we surely won’t be covering them all, but to kick off the new European fair season, we are here in Rotterdam.

Art Rotterdam opened last night with 103 galleries, offering a wide range of presentations; from overflowing curated booths to sparse solo shows of emerging talents.
We picked out eight booths you shouldn’t miss. Listed in no order of importance. 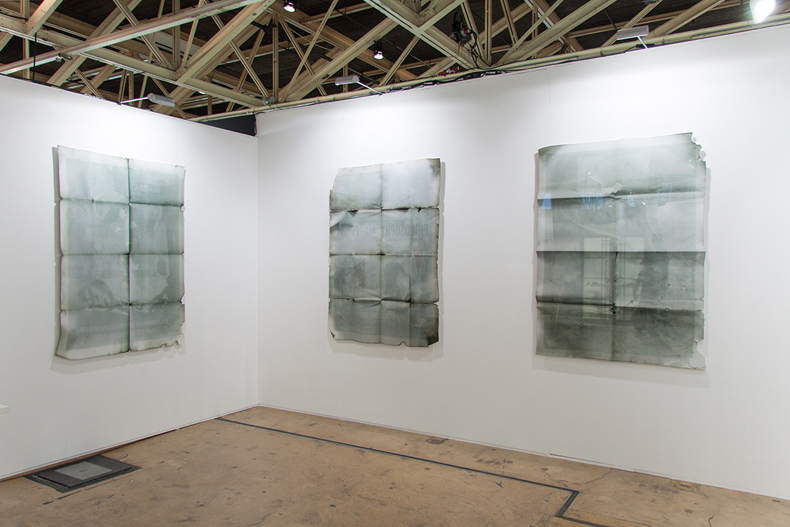 Image courtesy of the artists and Cinnnamon

The sparse presentation at this new Rotterdam based gallery is the highlight of the New Art Section. Lars Morell’s new Ink on Paper works are a continuation of earlier series presented at Palais de Tokyo, Paris and M HKA, Antwerp. They consist of digitally constructed, imaginary vintage movie posters that are digitally merged with photographs of the backsides of actual vintage posters, printed on shape-cut Diasec. This series of works relate to the nineteenth century pioneers of illusionism and special effects, and evoke a nostalgic fin-de-siècle playfulness. 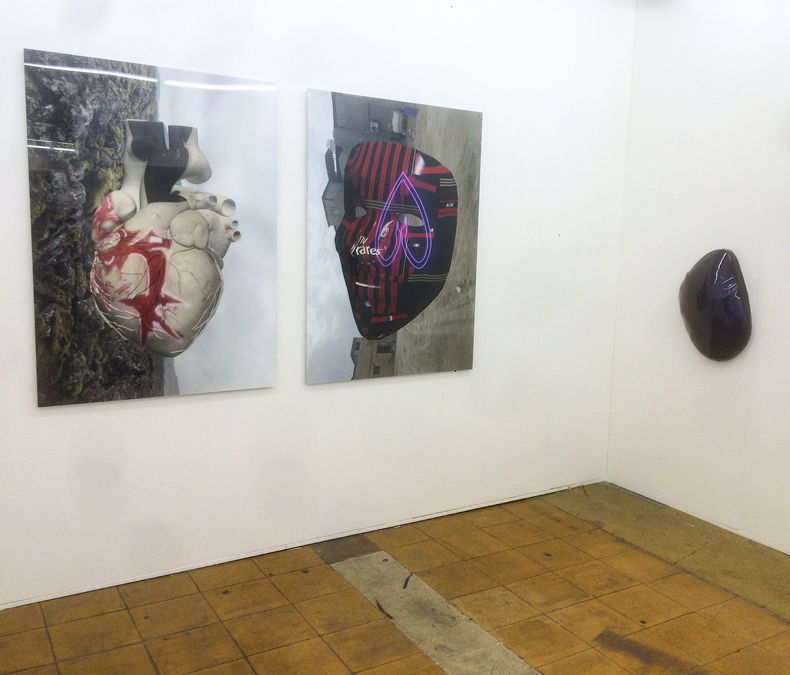 This is literally the first booth you see when entering the fair, and you are immediately dragged in by the seductive monochromes of Bob Eikelboom. These monochromes of car paint and epoxy on canvas combine his interest in both a low-key reality of PlayStations and Lamborghinis as well as in a more highbrow fascination with modernist monochromes. The highlights of this booth are without a doubt Kareem Lofty’s C-prints. Inspired by the digital imagery, video-clips and French banlieu hip-hop, Lofty’s work is layered with references and representations that clash and create what could be called a contra-imperialism, showing the growing influence of a subculture of young Arab migrants on Western culture. 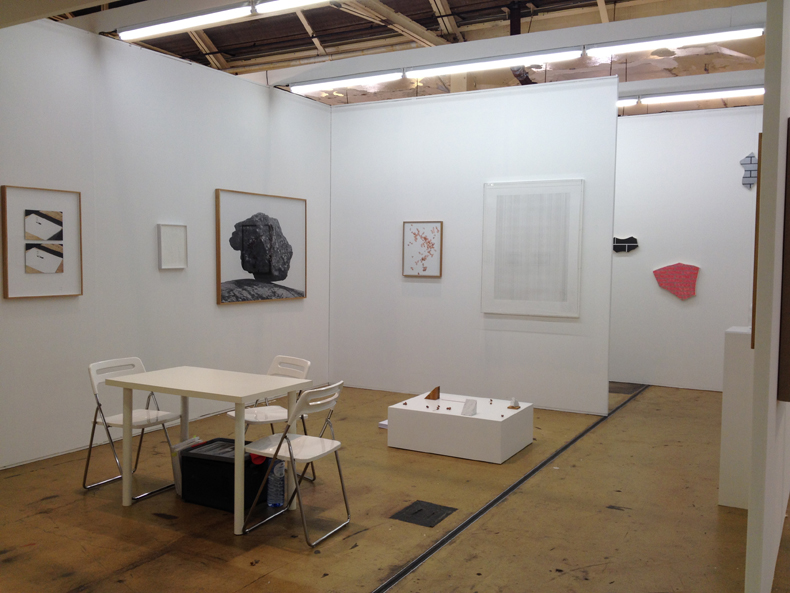 Image courtesy of the artists and Rotwand

The main part of Rotwand’s booth is dedicated to Finnish Mikko Rikala. His conceptual yet poetic works deal with natural phenomena and more abstract concepts such as time, weight and distance. While Rikala’s methods, techniques and concepts may vary, the core questions always revolve around the possibilities of Man to observe and understand the world beyond the rational mind. The results of his search takes many forms: digitally merged photographs of the sea, carbon paper drawings made by moving a stone across a carbon paper for a specific period of time, or a meditative pencil drawing of 100 one meter lines. 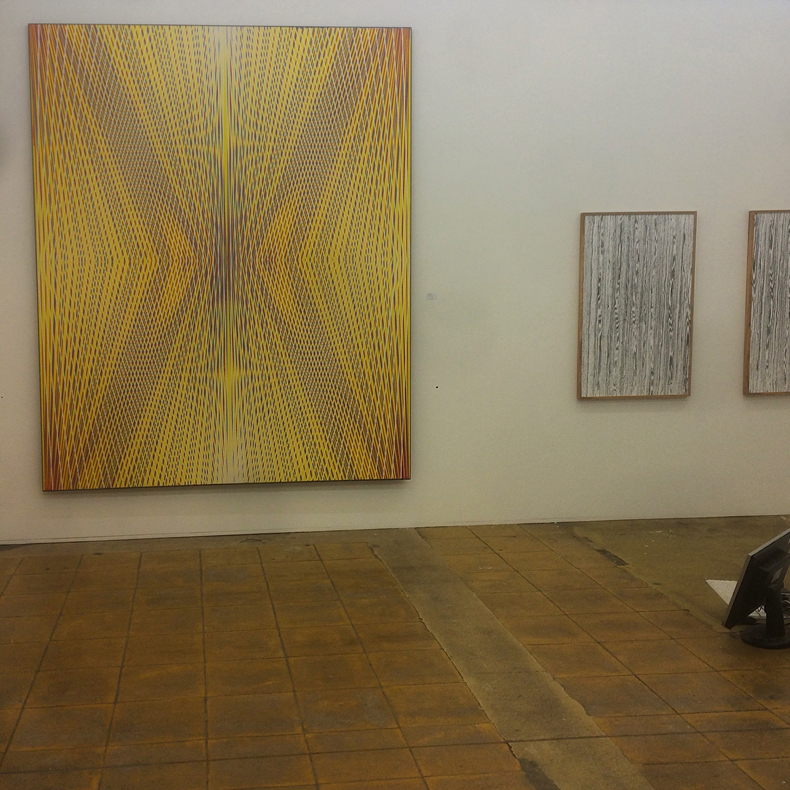 Juliette Jongma brought two photograms by Lisa Oppenheim. They were made by placing a paper-thin sheet of olivewood on photographic paper. Both photograms are made from the same sheet of wood, but because the exposure of the paper happened by a match, both are quite distinct. To close the loop, both photograms are presented in an olive-wooden frame. Oppenheim’s work alone is enough to visit the booth, but to make it even better; her work is flanked by a gigantic, hypnotizing painting of Florian & Michael Quistrebert. They digitally composed a mathematical composition of straight lines to create a form that seems circular. The work was created through a series of stencils, making it wonderfully painterly. 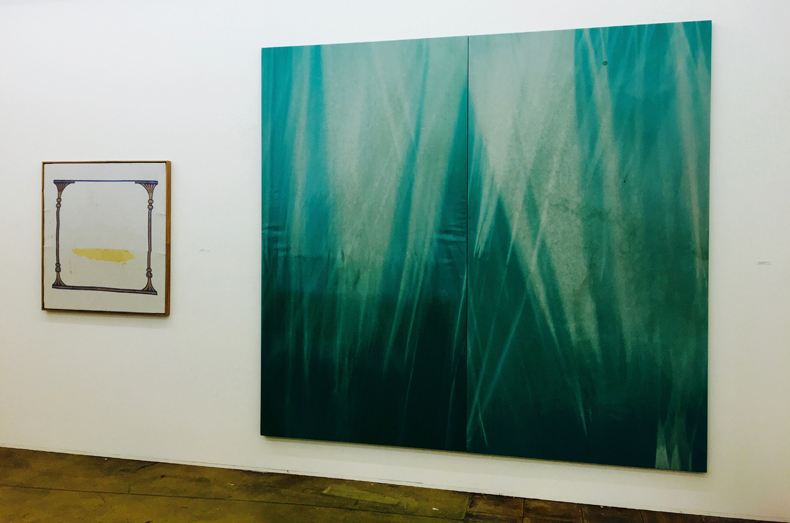 Image courtesy of the artist and Jeanine Hofland

Amsterdam based Jeanine Hofland and Rome based Frutta Gallery are joining forces in this solo show, presenting the work of Argentinian Alek O. Fascinated by the imperfections of daily life and the traces of history in discarded objects, Alek O. re-uses, re-shapes and assembles ‘objets trouvés’ into two-dimensional, often abstract tableaux that flirt with Abstract Expressionism’s aesthetic, fused with Arte Povera’s attitude. The works presented at Art Rotterdam originate mostly from materials she found at the beach near Lake Como: old towels, tent canvasses discolored by the sun, pieces of beach parasols, etc. One of the works we enjoyed most is a small canvas entitled Edward Higgins White, IX, for which Alek O. asked friends for old gloves that she subsequently pulled apart and used the wool to embroider an abstract pattern. 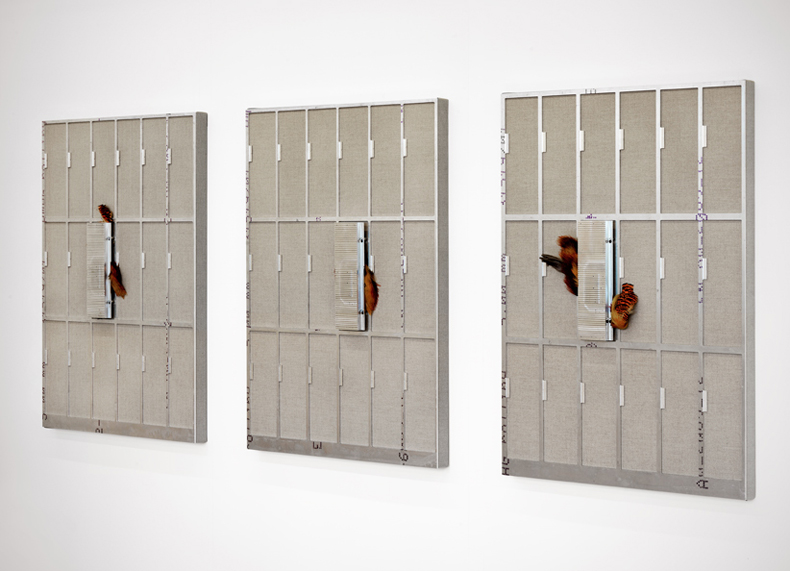 Image courtesy of the artist and Fons Welters

Central to Fons Welters’ booth is a presentation of the work of David Jablonowski, acclaimed for the ingenious way in which he plays with a wide range of materials. At Art Rotterdam, he is showing a series of still lifes, creating exciting contrasts by combining computer motherboards – elements from contemporary communication technology – with organic elements like dead pheasants. Opposed to these industrially produced works, he is also showing a large, hand-modeled carbon sculpture, and a new video installation. 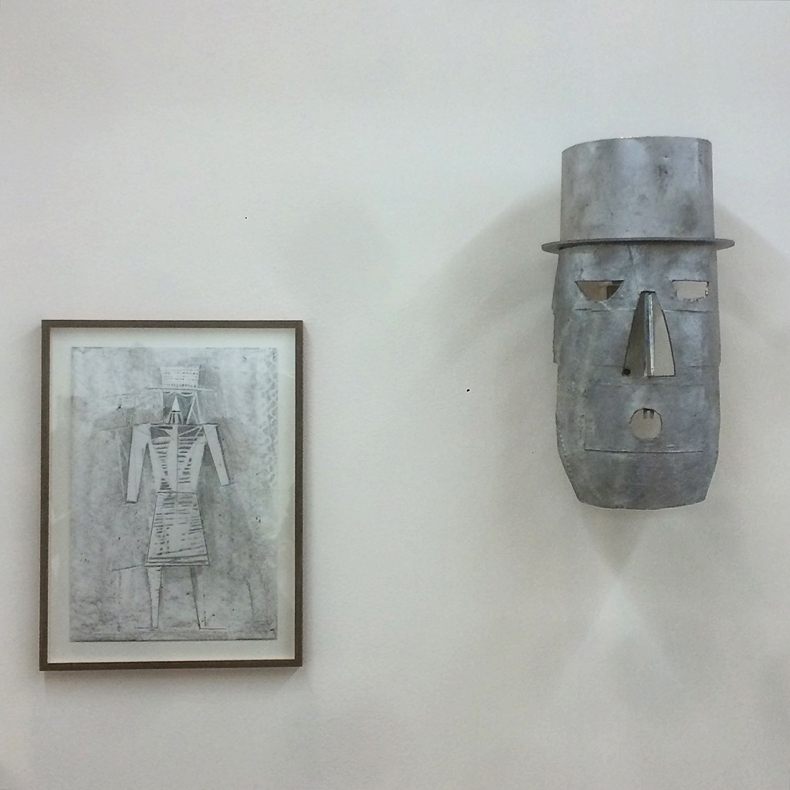 Dirk Zoete’s work is featured extensively on Art Rotterdam. He is presenting a series of performances in Intersections, and a series of his drawings are shown at the center the Kromus+Zink booth. His drawing are accompanied by a very impressive aluminum cast of one of his cardboard masks. Zoete’s work is, among others, combined with a version of conceptual photographer Paul Kooiker’s Nude Animal Cigar.  In this well-known work, Kooiker looks back over his twenty-year career, resulting is a bewildering array of photographic works, in which images of nudes and animals are interspersed with close-ups of the countless cigars he has smoked in his studio over the years. 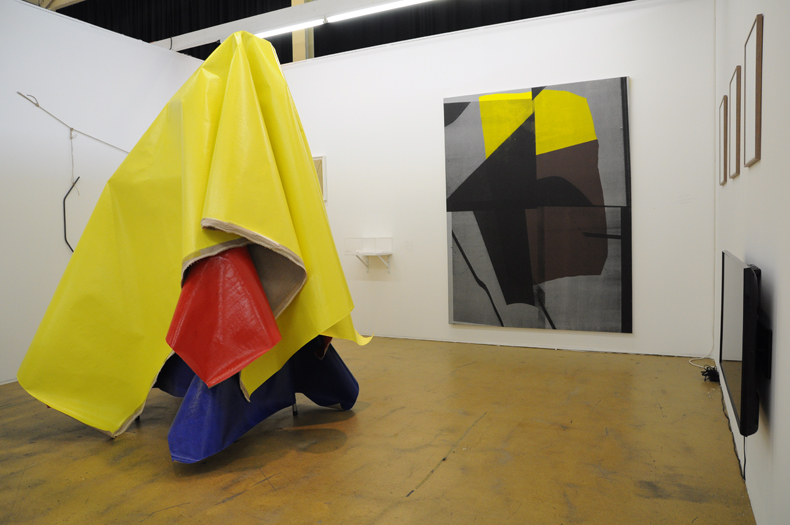 Ellen de Bruijne has a jam-packed booth, combining classics as Klaas Kloosterboer and Dora Garcia with emerging talent as Swiss duo Linus Bill + Adrien Horni.  Most of the booth is filled with series of new works by Klaas Kloosterboer. The central work 15189 (yellow) reflects several acts performed by the artist, such as thedraping of colourful canvasses on a series of stacked objects. The result is a playful and abundant rendering of 2D into 3D. Almost hidden behind this mountain of canvas, is a plexiglass box containing Dora Garcia’s forged letters from Joyce to Ibsen, flanked by an enormous painting by Bill + Horni. These paintings start from small-scale collages created in various media and techniques. The images are subsequently blown up, silk-screened and coloured by hand, constantly alternating between the perspective of the original and of the reproduction.