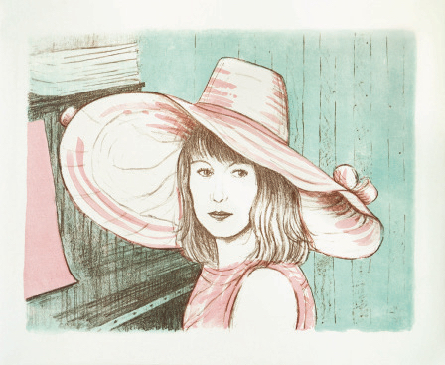 The film’s co-star, Dorléac, along with the flamboyant pastel palette of the costumes and domestic scenery that Demy brings to life, serve as source material for a striking lithograph by the German artist Birgit Megerle: someone who has done much in her career to reimagine the language of portraiture, specifically of female subjects.

In this three-color lithograph – her first ever work in this medium – Megerle focuses on a single image from the movie, in which Dorléac’s character turns away from an upright piano to face the camera. For all of the vibrancy and beauty of this ’60s film star, here Megerle, as she often does, steals something of her vitality, wresting it from a potential moment of simple identification or straightforward attraction. Dorléac remains firmly imbedded in the domain of the print, the world of two dimensions. Megerle’s lithograph manages nonetheless to preserve a glimmer, however distant, of the original scene, and in so doing, extracts the mere semblance of beauty from its source. The resulting distance is historical and psychological – elegantly measuring the space between our world and that of the actress.

Birgit Megerle focuses on the figure in her paintings. The artist paints her surroundings, well-known personalities, stars, and – with increasing frequency in more recent paintings – anonymous individuals. Precise, detailed, and delicately executed, the portraits are both artificial and distanced. Painterly “reduction” and abstraction determine the implicit views of the private and the public, of medially constructed personalities, and of casual, random poses.

In her practice, Birgit Megerle addresses media-specific questions and is concerned with the temporality and historicity of painting. Her motifs are contemporary, current and yet devoid of an obvious time period or identifiable context. The images are subtly voyeuristic, direct our gaze, and yet remain vague, as if a hermetic glass pane or transparent veil separates us from the figures.