Everyone is familiar with the monumental charcoal drawings by Rinus Van de Velde. However, this artist has much more to offer than just drawing – he also makes film, sculpture, small drawings in coloured pencil, works in oil pastel, installations and ceramic ashtrays.  As an introduction to his broad artistic work, we have brief look at the last years of his practice. Rinus Van de Velde started out as an obsessive draftsman and made – rather small – drawings with Siberian chalk on paper. These were based on an archive of photographic images from an endless collection of old National Geographic magazines. Van de Velde took these drawings from their original context and combined them with fragments of self-written text. Each of these drawings was a separate element in an ever-growing narrative.

After a few years, however, the same characters start to appear in his drawings. These characters are always creative geniuses in a very specific time and place – a modernist artist named William Crowder, or a communist poet at the beginning of 20th century Russia. Although these characters are not real alter egos, elements from Van de Velde’s own life inevitably slipped into his work.

This mixture of life and work continues in a series from 2012 entitled Self-Portrait as… In these works, the artist portrays himself as a central figure but assumes various roles. He is, for example, …a tennis hero or …the young Ellsworth Kelly. Van de Velde soon also starts portraying a number of close friends as characters in his drawings. The series The Story of Frederic, Conrad, Jim and Rinus (2013), for example, also includes writer Koen Sels and Van de Velde’s gallerist Tim Van Laere. For this series, Van de Velde stages a number of situations in elaborate decors, that he photographs extensively before drawing in large format. In further series, Van de Velde continues in the same way. The sets he builds in his studio become larger and more complex. Every element in these sets – from houseplant to full bathtub – is from cardboard, emphasising the fictional and unreal character of these sets 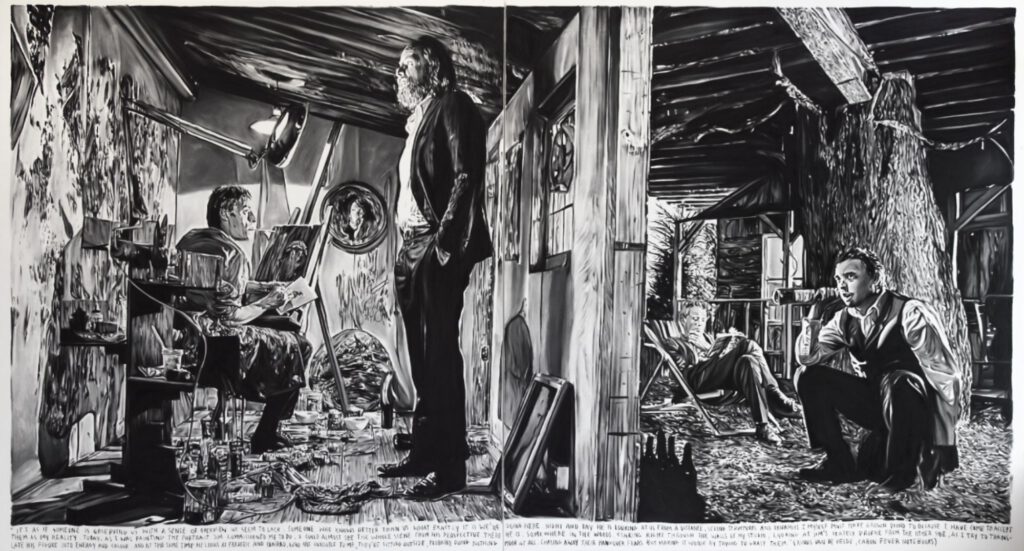 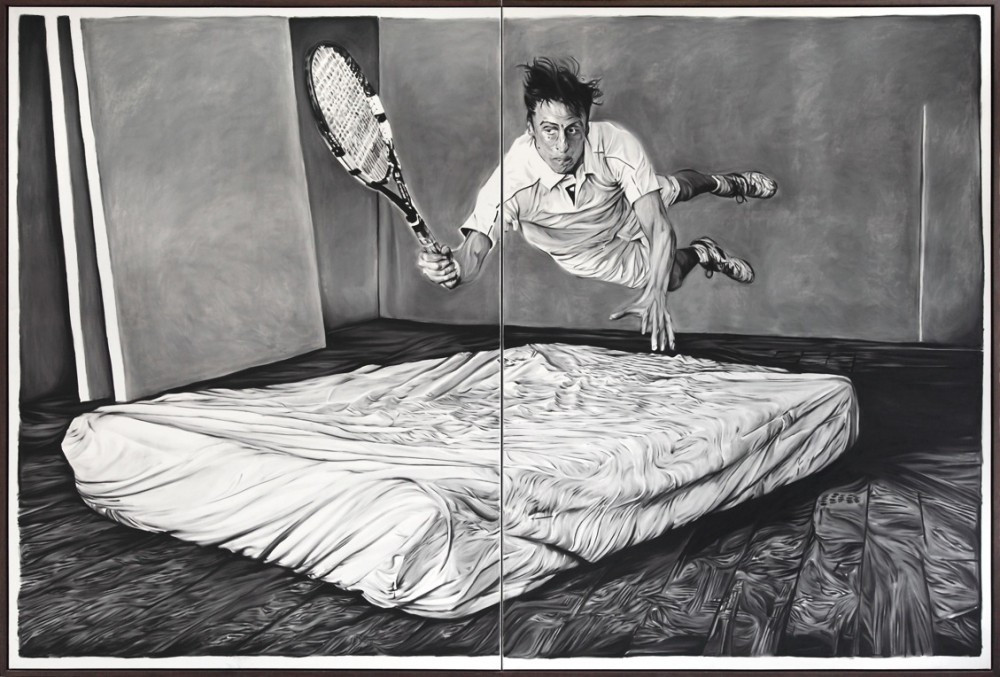 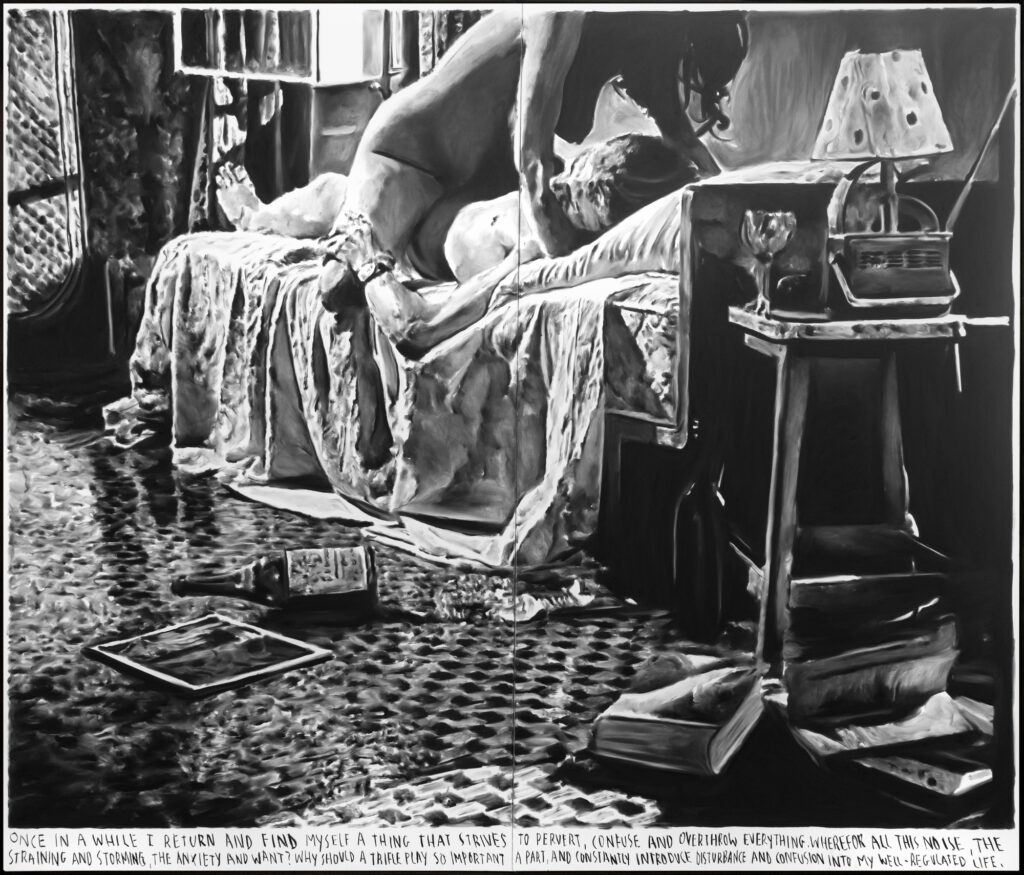 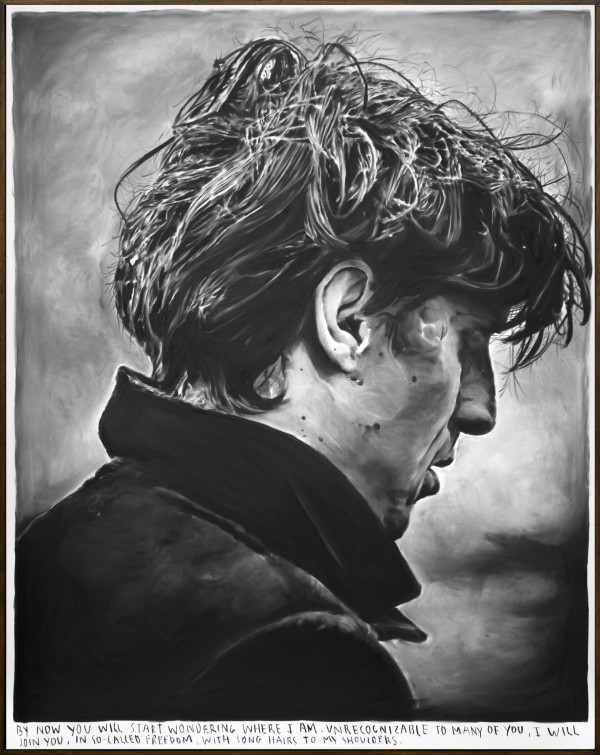 Rinus Van de Velde - By now you will start wondering where I am, 2019 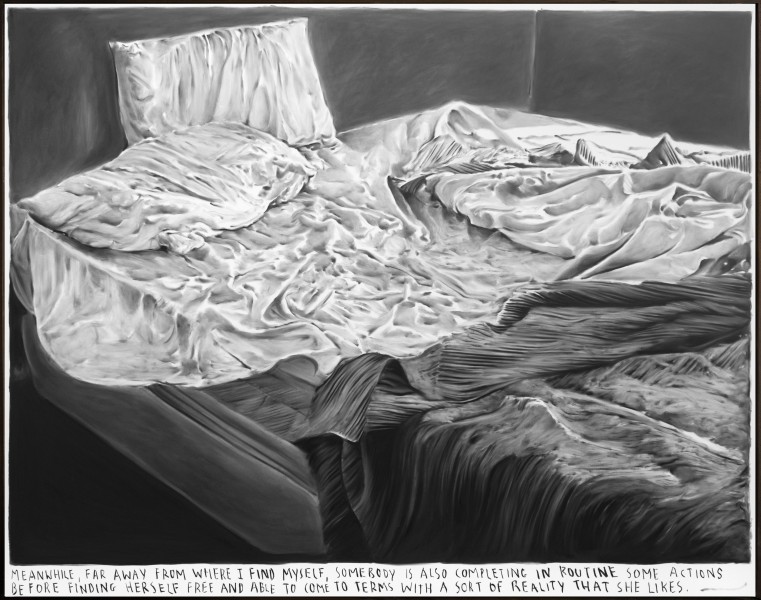 As his sets become increasingly large and complex, Van de Velde decides to film the situations he stages. This eventually results in 2019 in a 40-minute film entitled The Villagers. The film premiered during the exhibition of the same name at Van de Velde’s gallery Tim Van Laere in Antwerp. The exhibition was a total installation in which the spectator enters the artist’s universe with, besides small drawings in colour, large charcoal drawings and the film, also a life-sized diner and hotel corridor, which appear as decors in the film and of which every element has been copied in cardboard down to the smallest detail.

However, not every drawing finds its origin in these decors. Van de Velde is still building up a large image bank full of found photos, film stills, self-made iphone photos and images from magazines or the Internet. 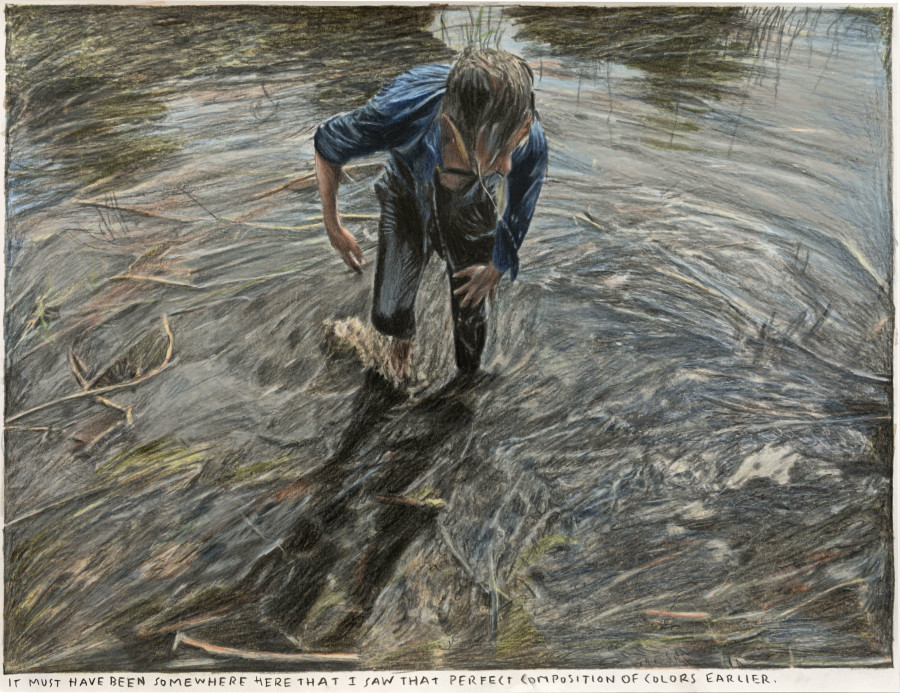 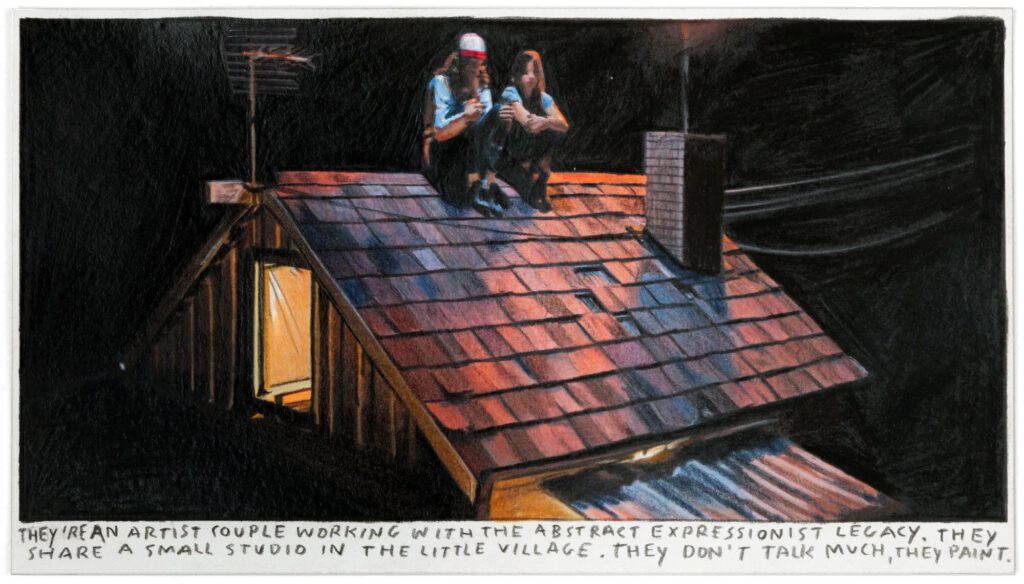 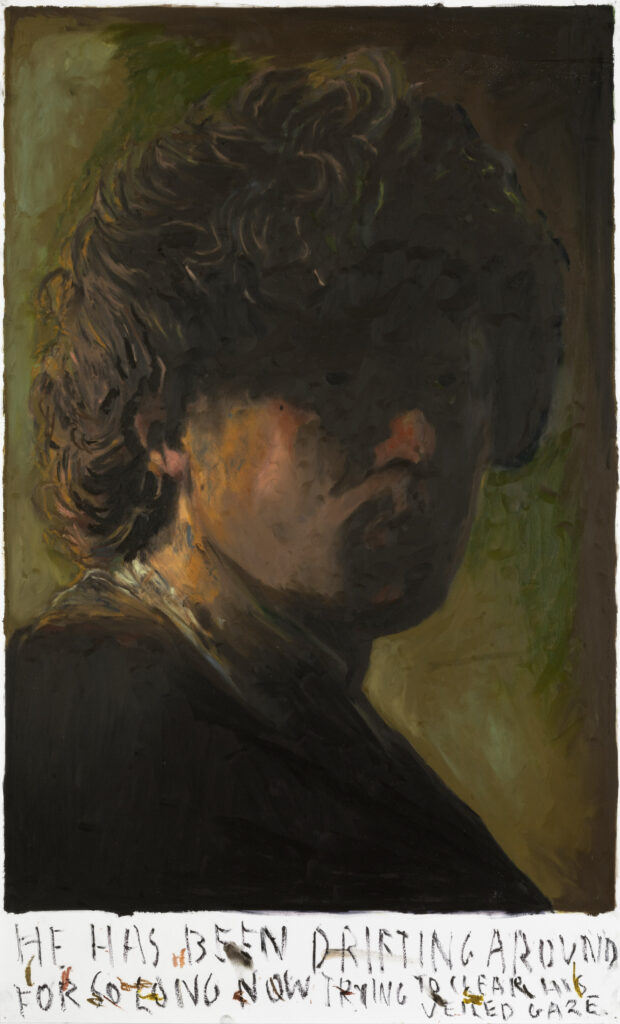 Rinus Van de Velde - He has been drifting around, 2021 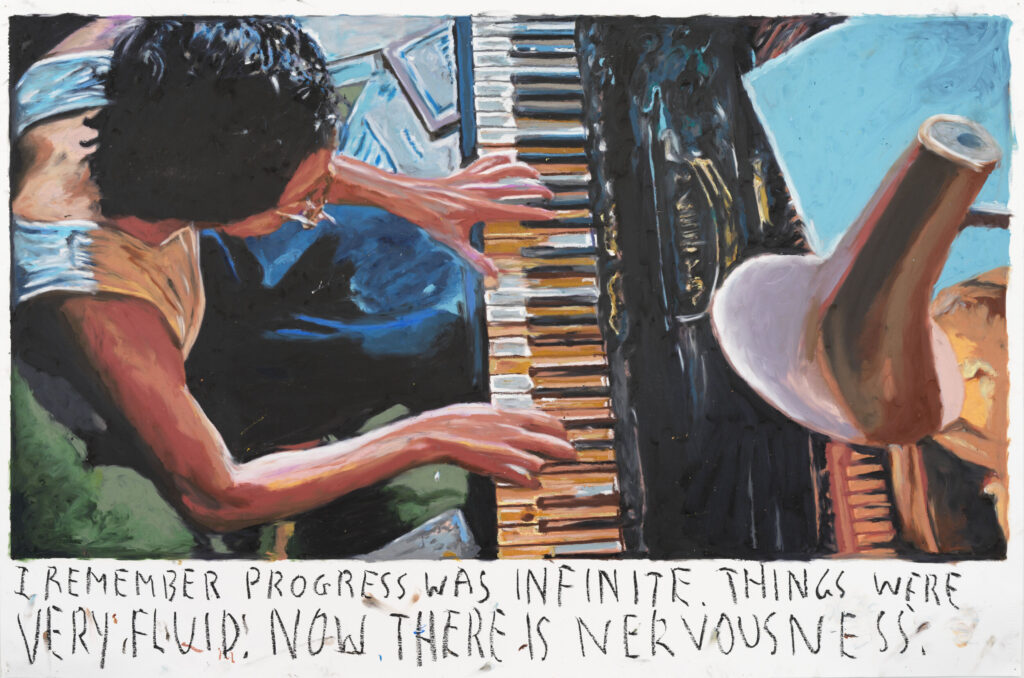 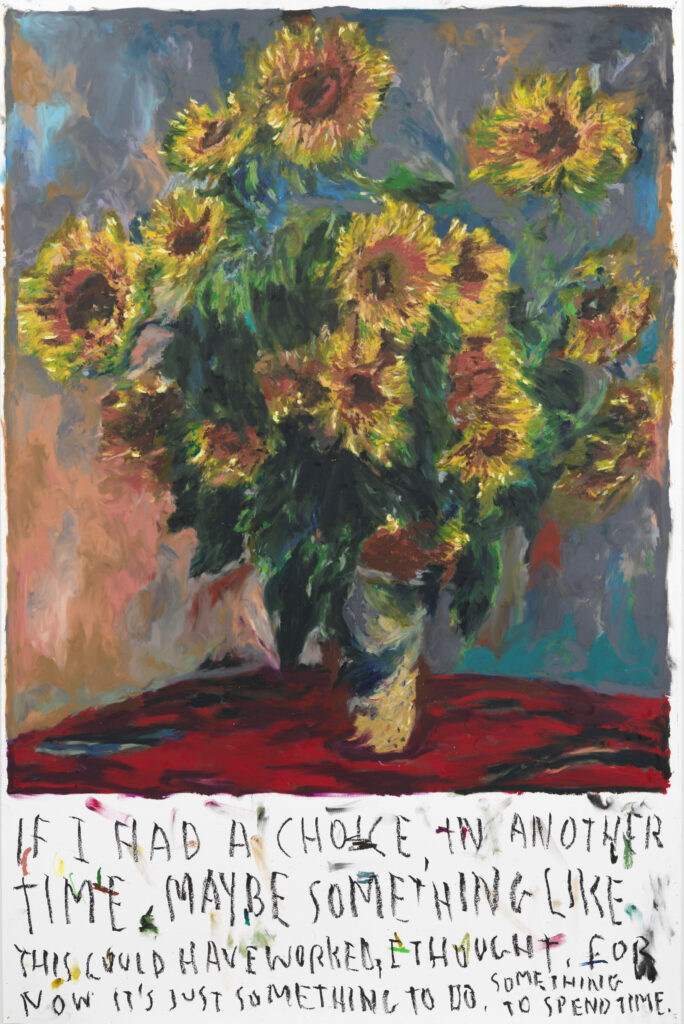 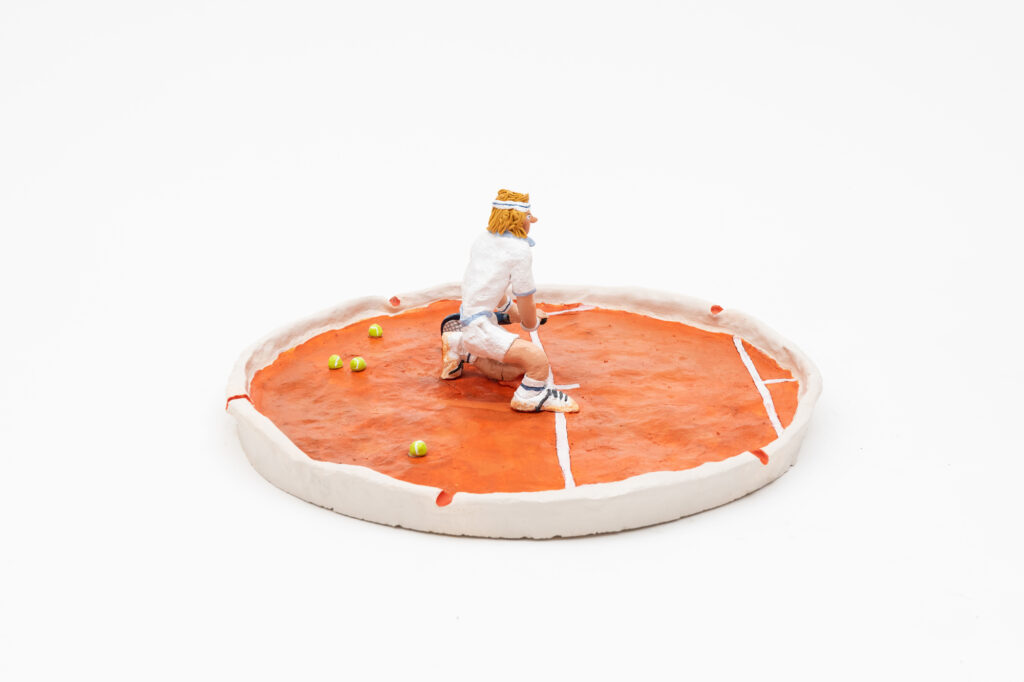 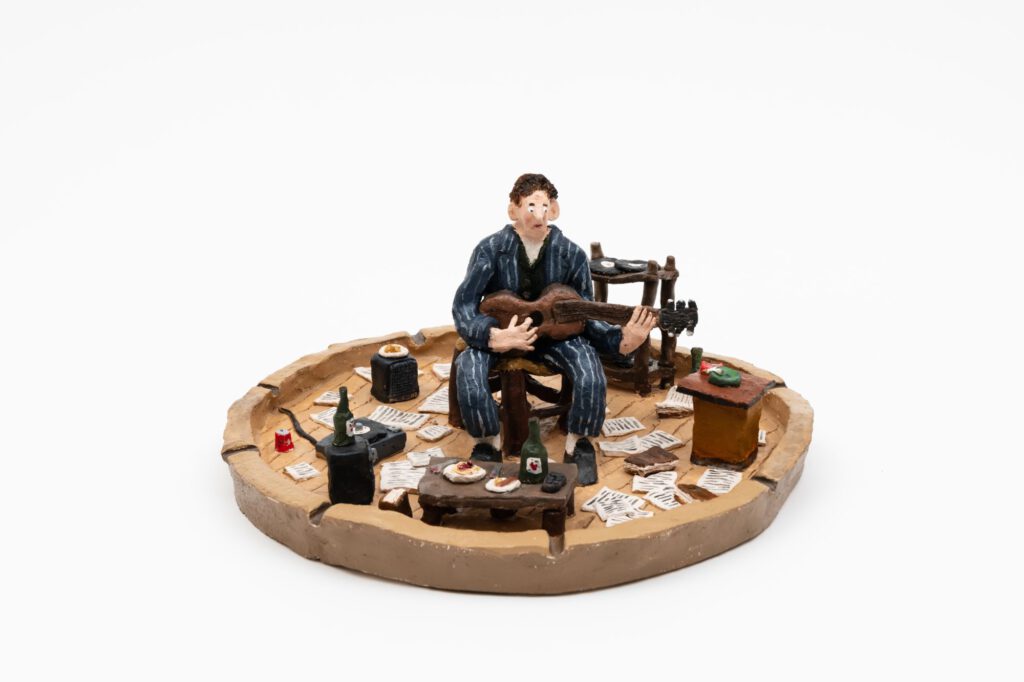 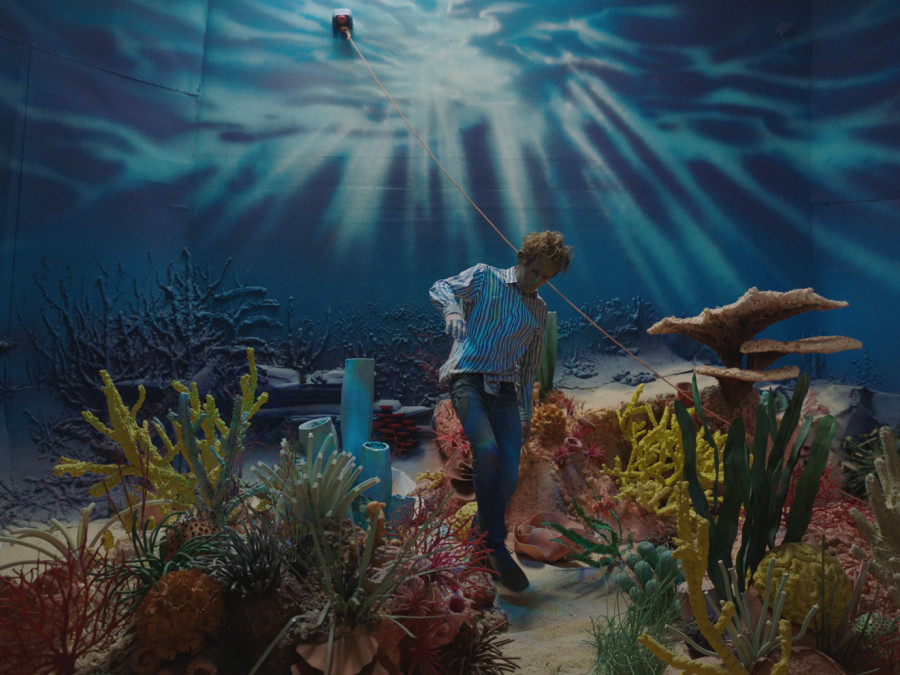 In addition to drawings, film and sculptural cardboard scenery, Van de Velde also makes ceramic sculptures. These are completely separate from the aforementioned works, all of which are linked to ‘the studio’ where Van de Velde works with his assistants. Van de Velde makes ceramic sculptures when nobody is around, at night for example. As an avid smoker, he started making an ashtray for his studio, and he sticks to that. All ceramic sculptures Van de Velde makes are therefore ashtrays. They depict scenes from the life of an artist: from a visit to the zoo with the children on Sunday morning, to a visit to the psychiatrist. In a way, these ashtrays are a kind of antipode of the fictional staging that takes place in the studio. Or not so much, because apart from the artist, nobody knows where the line is between fiction and reality.

Rinus Van de Velde is represented by the following galleries,
click through to discover more of his work

You can also find more works by Rinus Van de Velde on his own website. 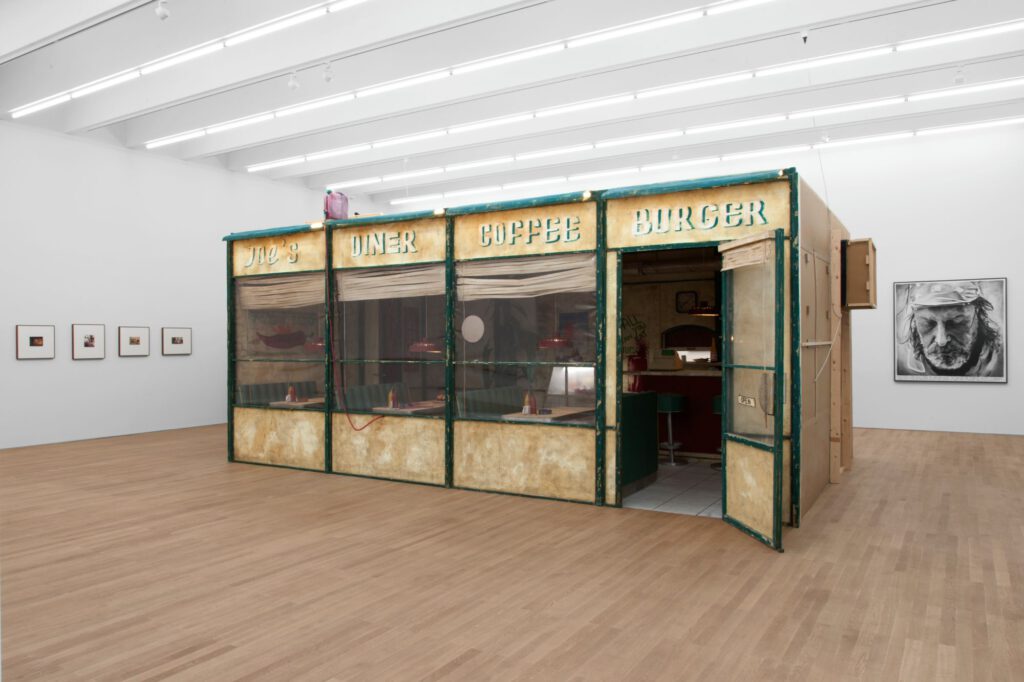 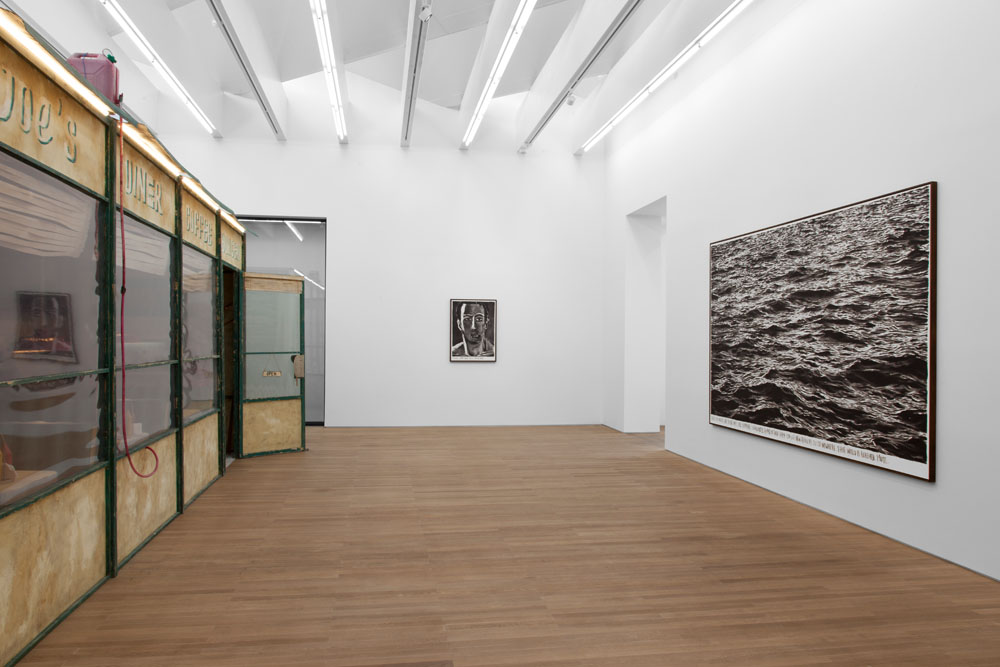 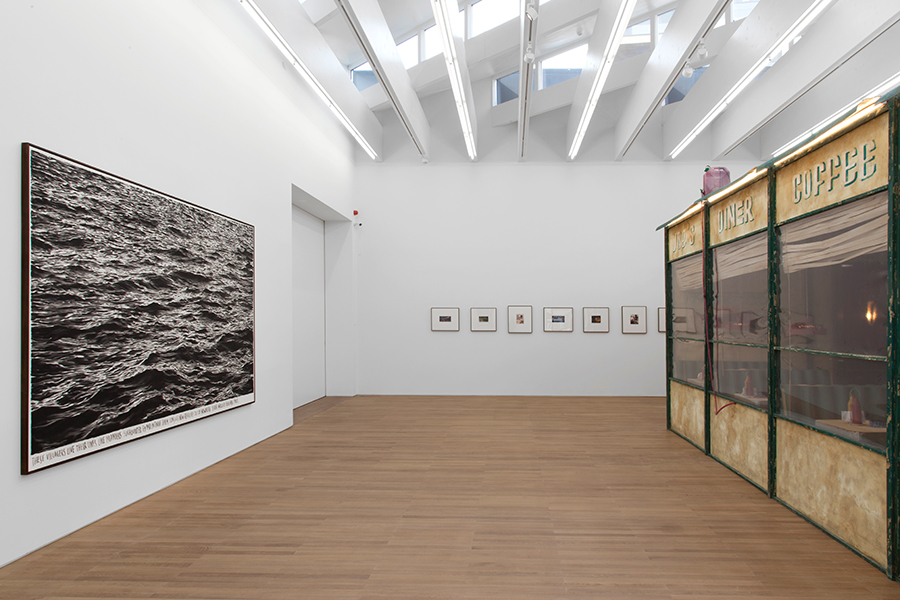 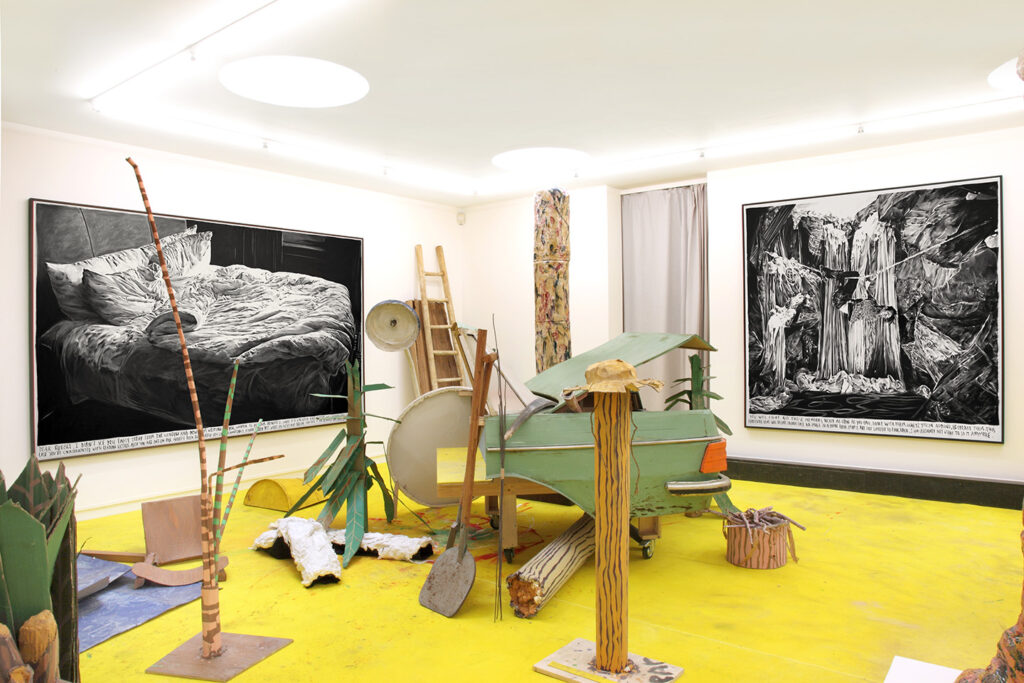 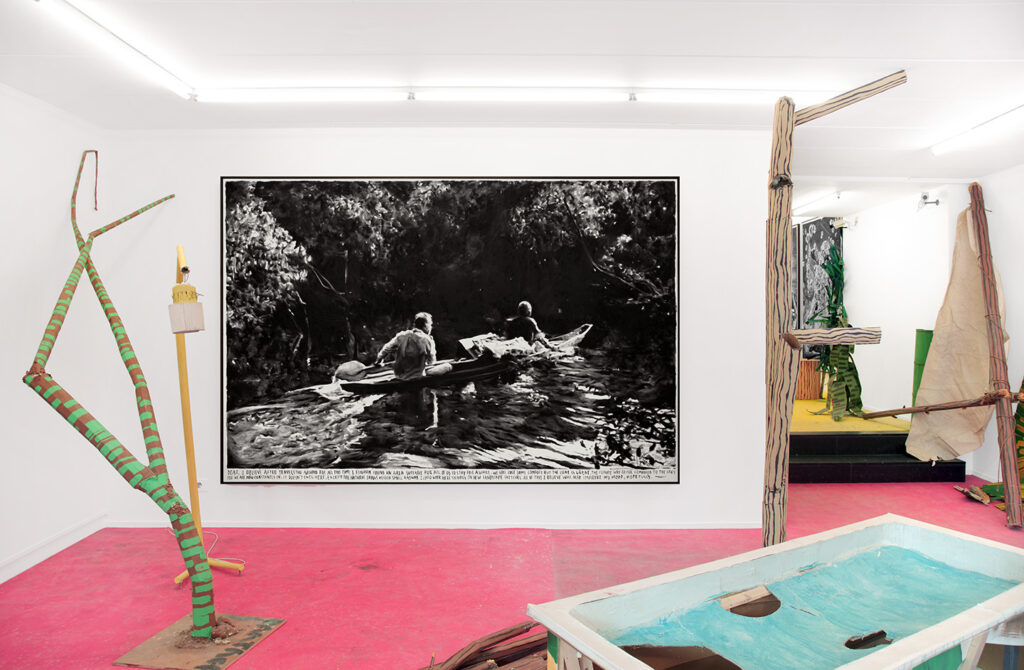 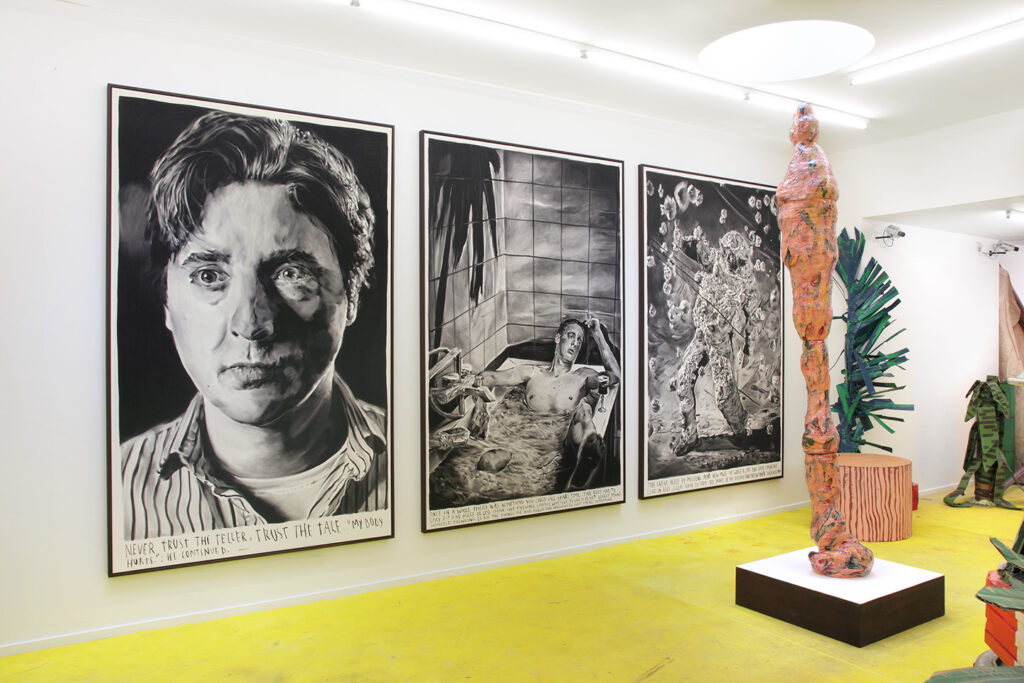