A Temporary Monument for Brussels #4 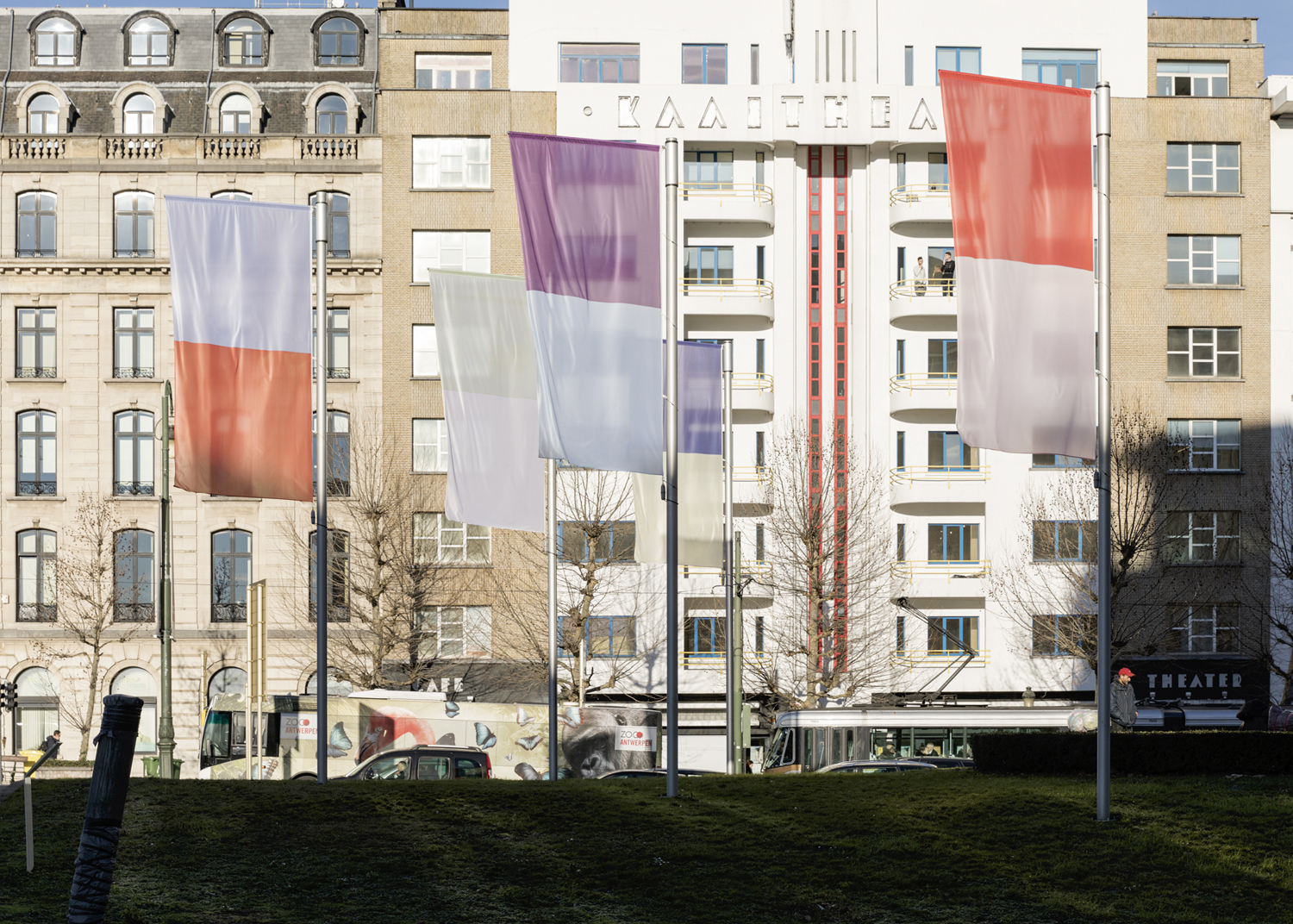 Philippe Van Snick (°1946, Ghent) has lived and worked in Brussels for almost 45 years. He has built up an artistic oeuvre full of colourful paintings and installations that all start from a number of clearly defined principles. His minimalist formal language is built around a number of concepts, to which Philippe Van Snick has remained true for decades.

From his very first works, there has been a special interest in the concept of duality: opposing forces that keep each other in balance. A second important principle developed in the early 1970s, when Van Snick started working with a numerical system, in which the number 10 is central. This system was created almost by chance, based on Van Snick’s Epingles de siganlisation, a work that builds on the tension that arises when he made ten different constellations of each ten identical hat pins. This decimal focus resulted in series of ten works each, in figures with ten corners, or in figures divided into ten planes.

Around 1980, Van Snick introduced colour. It is not surprising that he chooses exactly ten colours: the basic colours (yellow, red and blue), the mixed colours (orange, green and violet), the non-colours (black and white) and the alchemist colours (silver and gold). For Van Snick, these colours have both a mental and a physical meaning; for example, the non-colours stand for the immaterial, and the alchemical colours refer to the material. Years later, Van Snick adds an eleventh colour, namely light blue. In Van Snick’s practice, light blue symbolises day, and is balanced with black, which symbolises night. This limited colour palette is a new source of inspiration that results in geometric works on paper and canvas, but also on everyday materials, such as cardboard boxes, or on the leaves of plants. In this way, Philippe van Snick’s oeuvre develops into an endless play of forms consisting of ten parts – in all possible combinations of ten (plus one) colours.

Rules, of course, demand to be broken. In the mid-1990s there was a short period in which Van Snick mixed all the colours from his limited palette, and painted a series of brownish monochromes. Over the past decade, Van Snick has sometimes used a variation of his colour palette, with a series of more pastel shades. These pastel shades were first used in his Mexican Dream project in 2009 and culminated in a Mexican Dream Pavilion that he first showed a few years ago in De Hallen, Haarlem (NL).

For ATMFB, Van Snick brings together ten colours on five bi-chrome flags. In this series of visual reflections on what is important when we think about a monument for Brussels today, BrusselPastelBruxelles is most recognisable as a series of national or territorial flags. After all, most of these kinds of flags consist of combinations of monochrome planes. We all know that three successive vertical bands in black, yellow and red symbolise Belgium. Van Snick’s flags, however, do not represent territories or cultures, but are an expression of a decades old conceptual system with which an artist organises and presents the world. The colour boxes in Brussels Pastel Bruxelles do not symbolise anything, but offer the viewer a physical and emotional experience.
Surprisingly enough, Van Snick does not use ‘his’ ten basic colours, but the ten pastel variations that have emerged from the Mexican Dream project. These soft pinks and light greens are colours that you don’t immediately see in the Brussels streetscape but rather in Latin-American cities. Philippe Van Snick’s work for A Temporary Monument for Brussels also opposes his permanent art integration at the logistics centre TIR (Havenlaan 104), where he displays his fixed colour palette in an installation of over 40 metres long. Here at Sainctelette, it is important that Van Snick did not just select colours and put them together on flags, but effectively painted them on small wooden panels. If you look closely, you can see the lines of the brush, and the traces of the artist who uses a well-defined system to explore the boundaries of the poetic. 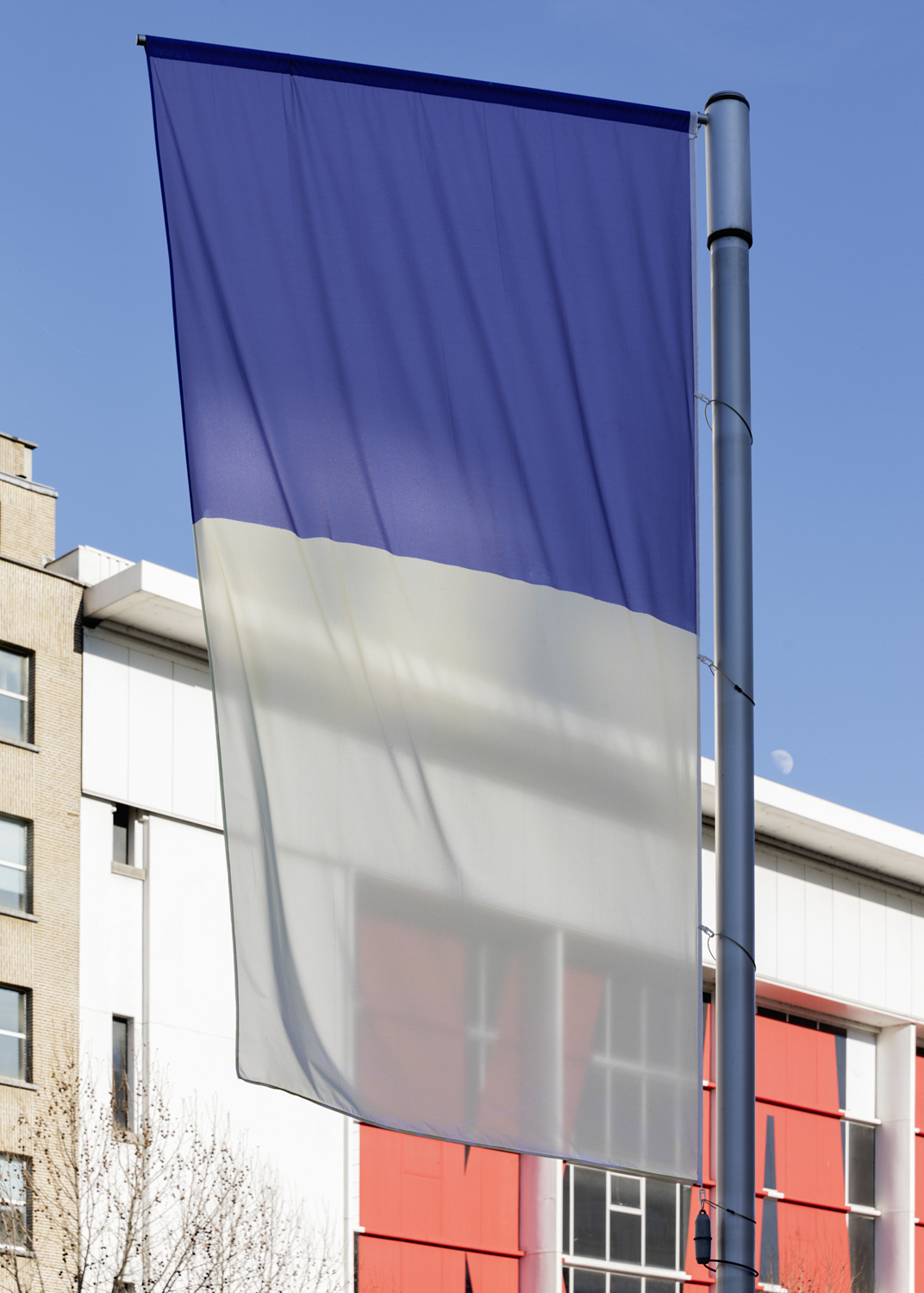 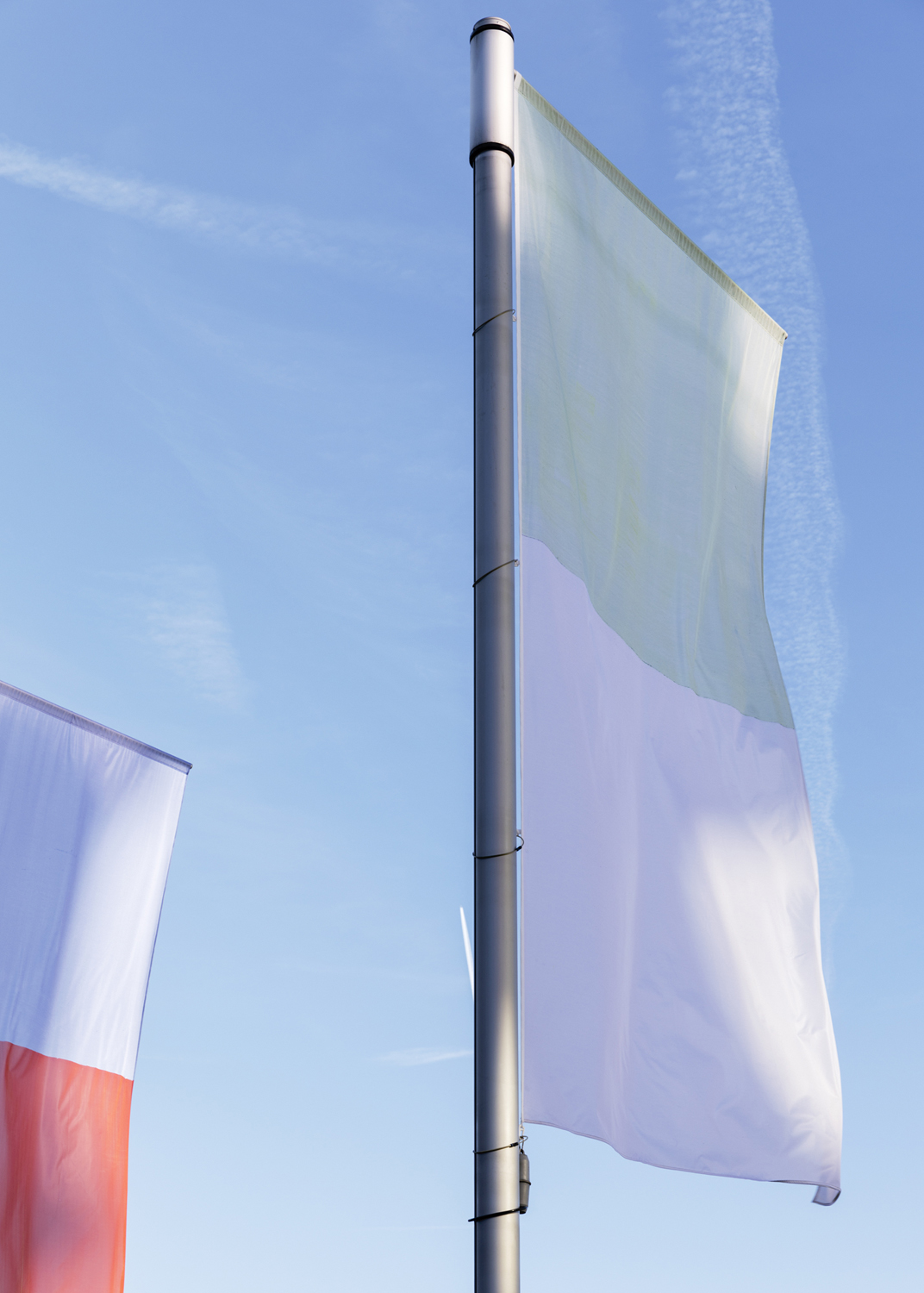 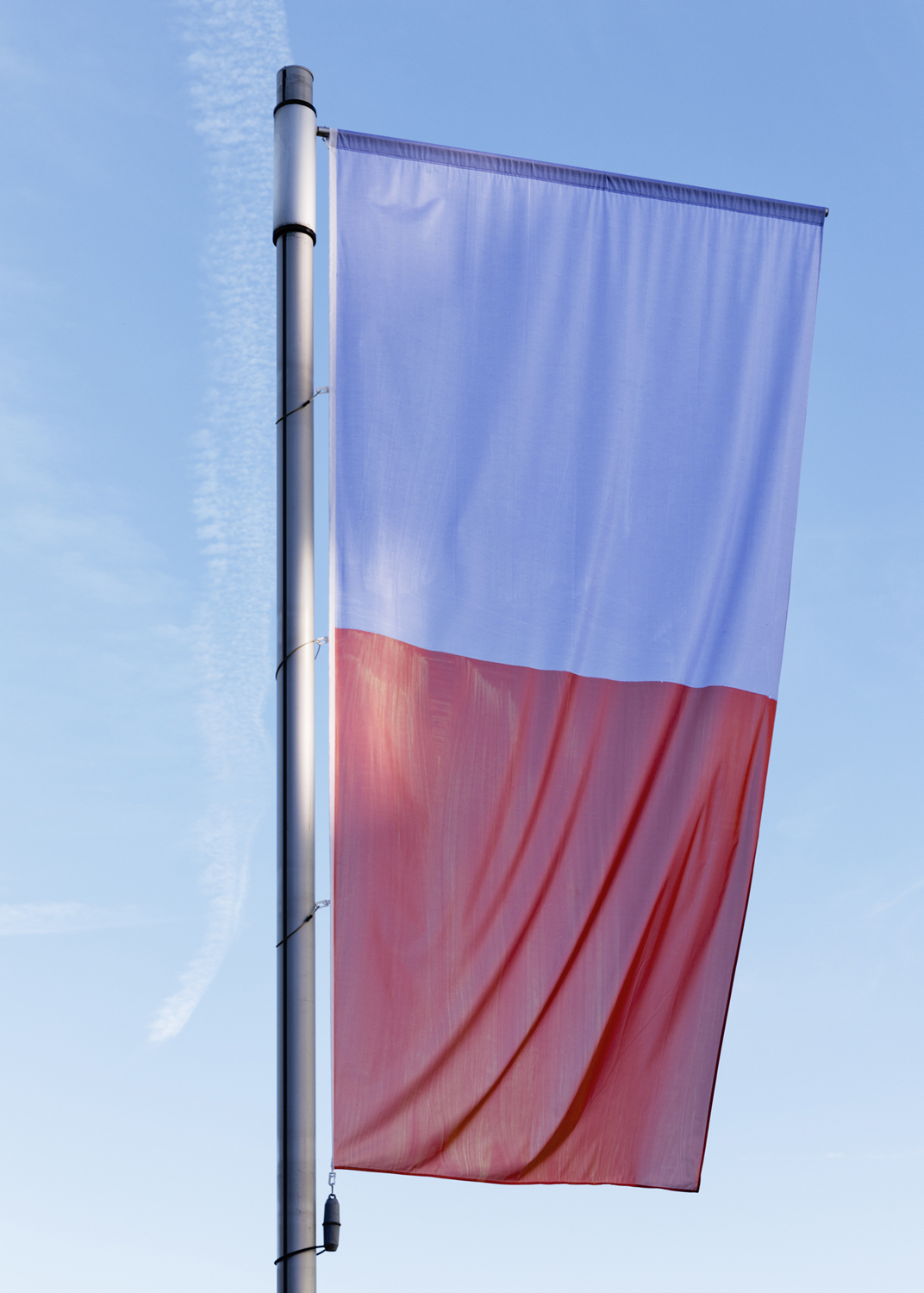 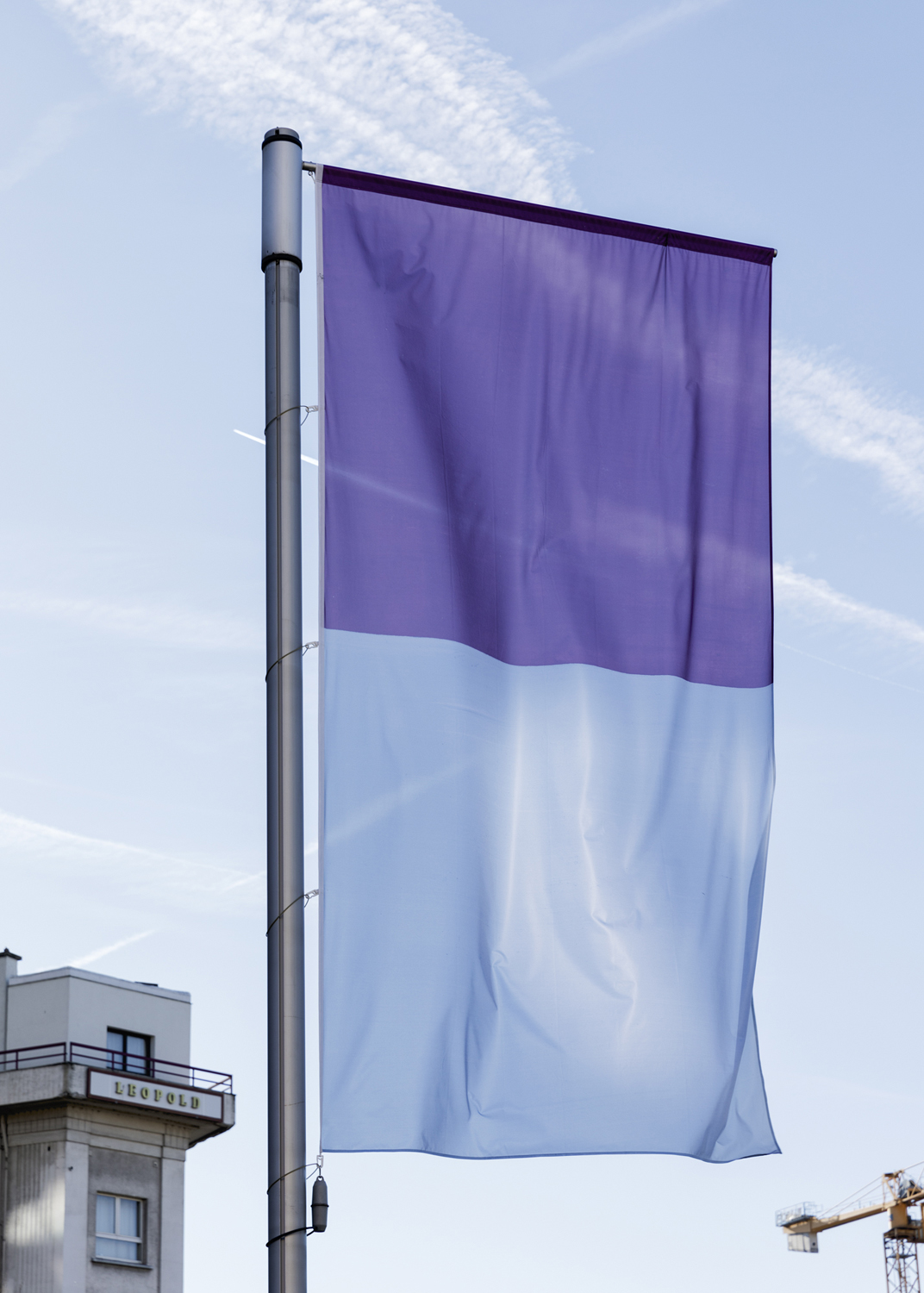 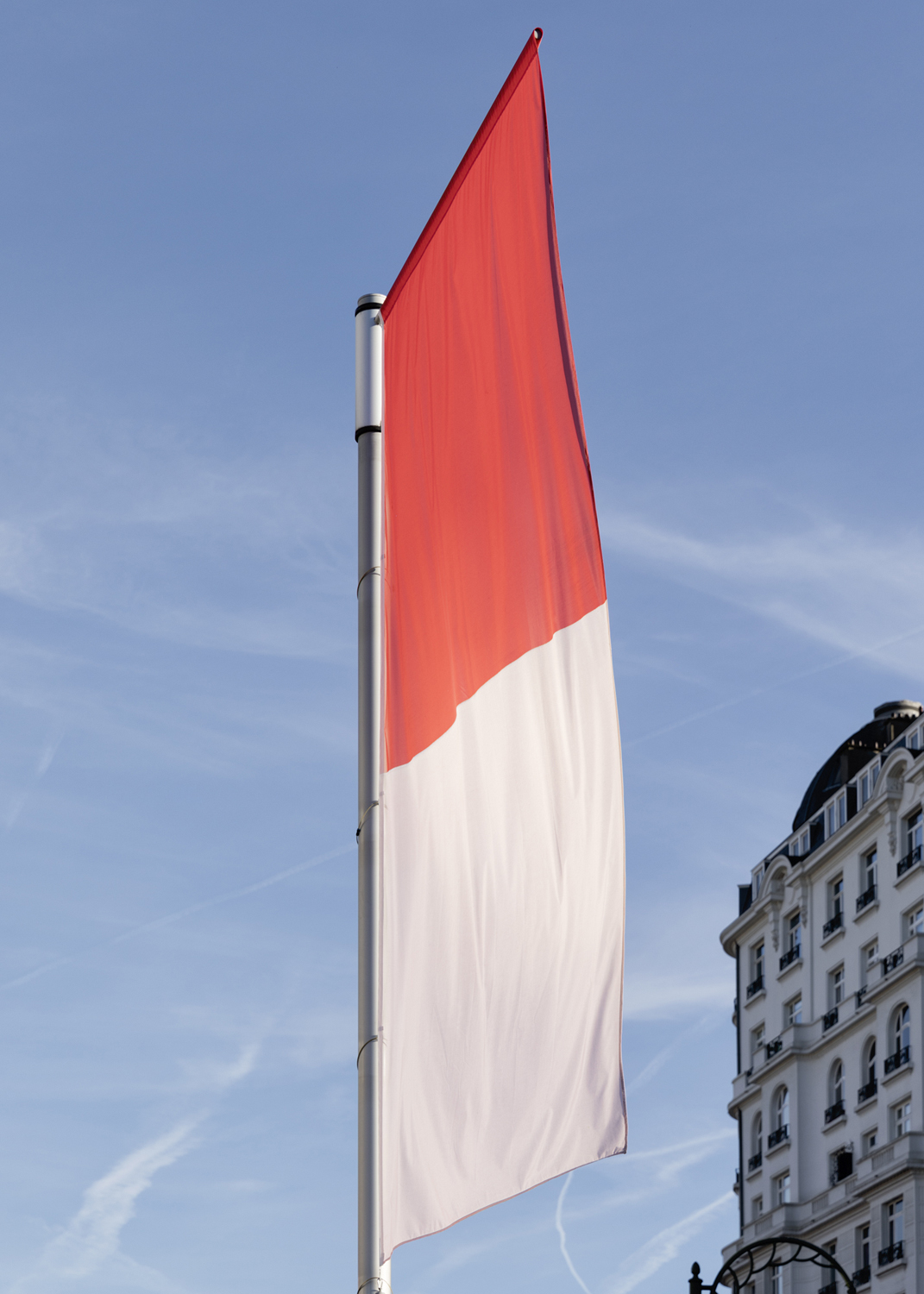 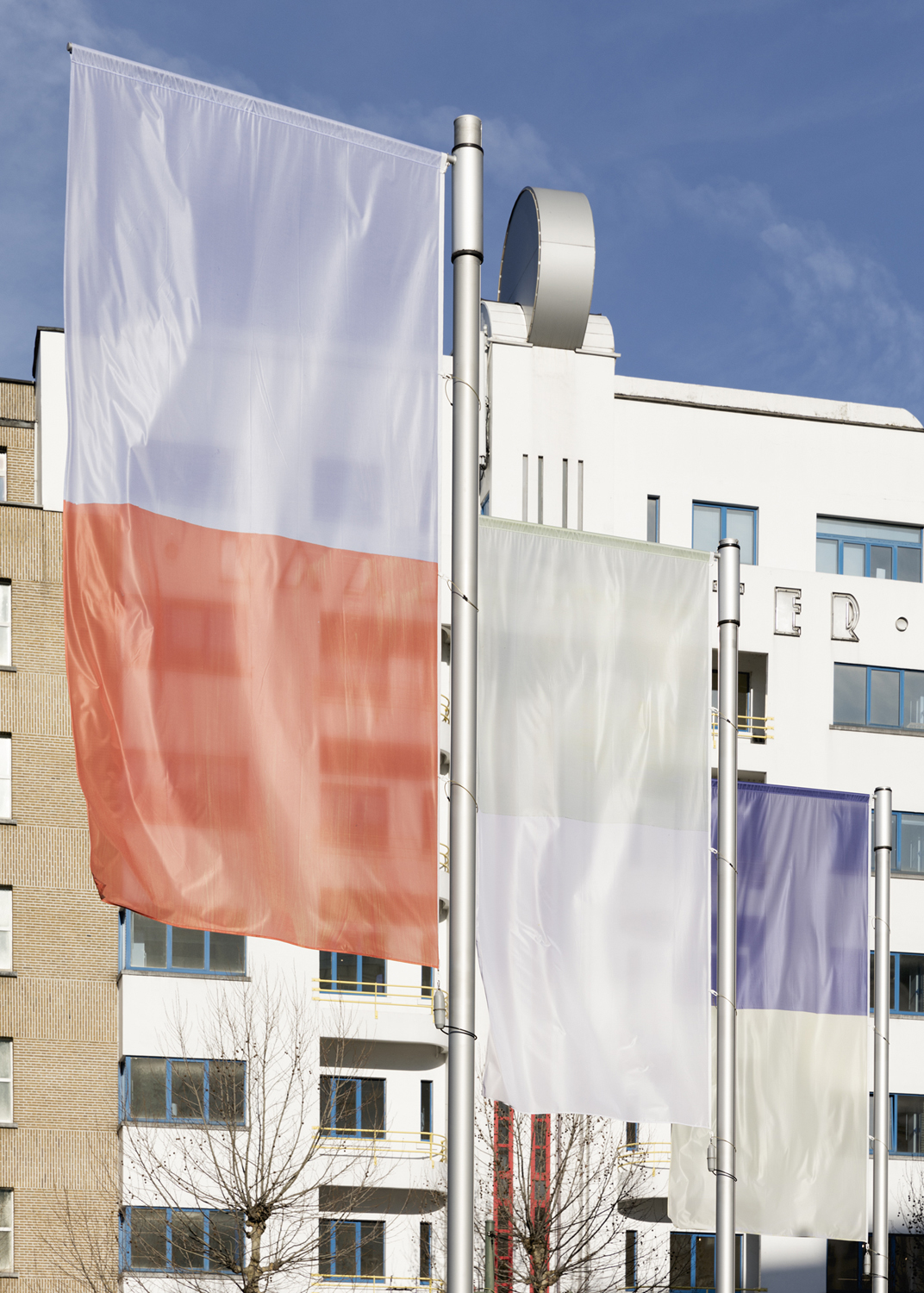 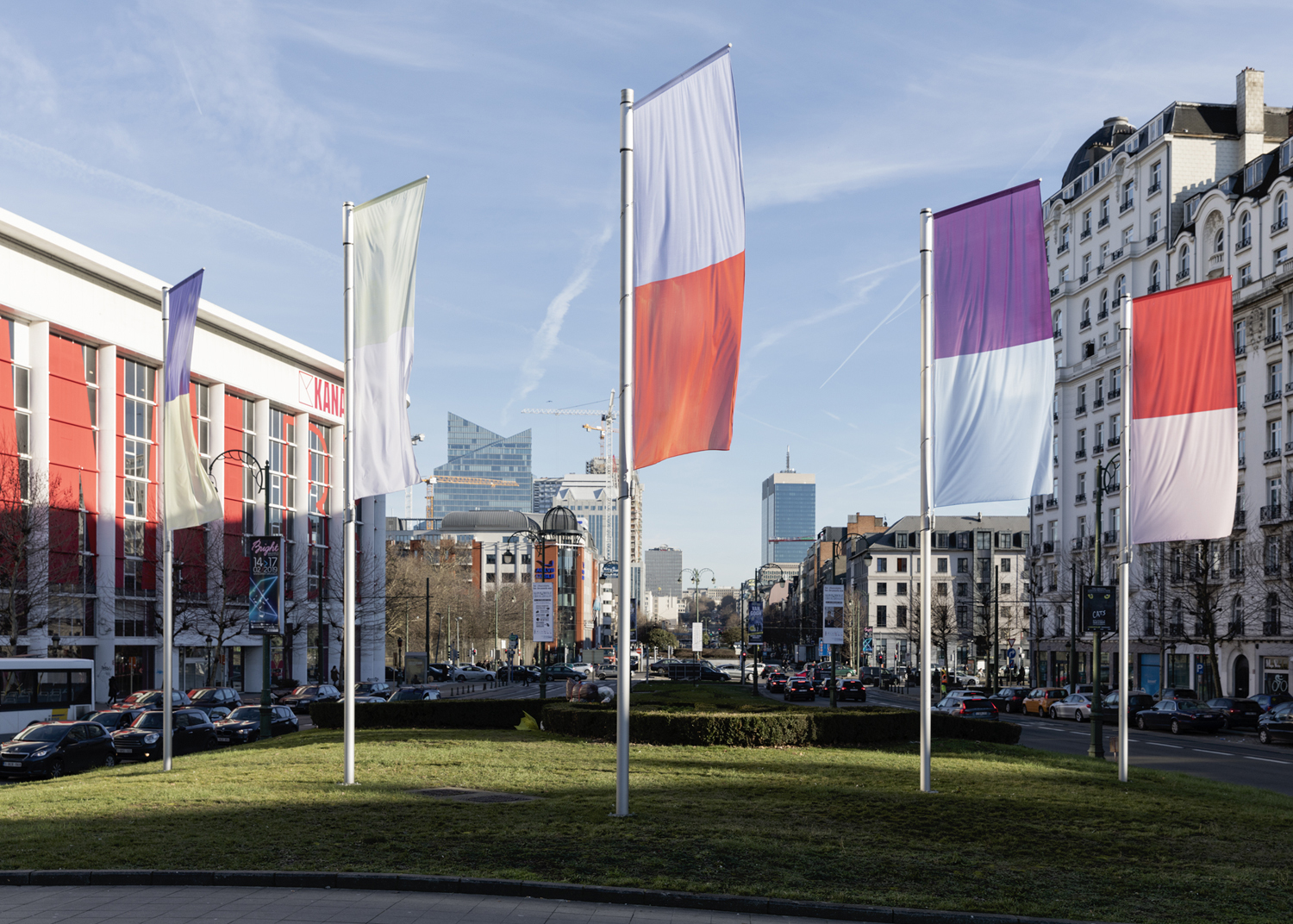