Charline Tyberghein’s paintings are composed of abstract geometric patterns, optical illusions and small symbols. Her work balances comedy and tragedy. The beautiful colours, playful shapes, and optical illusions give a cheerful impression. However, these find a counterbalance in the sometimes dark undertones of the symbols she paints, such as a noose, or a weeping candle.

Typical of Tyberghein are the optical illusions in her work. These started somewhat accidentally. During her studies, she studied the trompe l’oeuil painting technique of French-Hungarian artist Victor Vasarely. She found such peace in this illusionistic way of painting that she started experimenting with it herself.

It may be surprising in these times of digital technology that Tyberghein does not digitally design her optical illusions before she starts painting. The artist is very decided about this: she does not work with computers. It is important to her that everything is created manually. Thus, for her, each painting is an exercise in how a pattern behaves during her working process. Because of this, she also does not know what a painting will look like until it is finished. 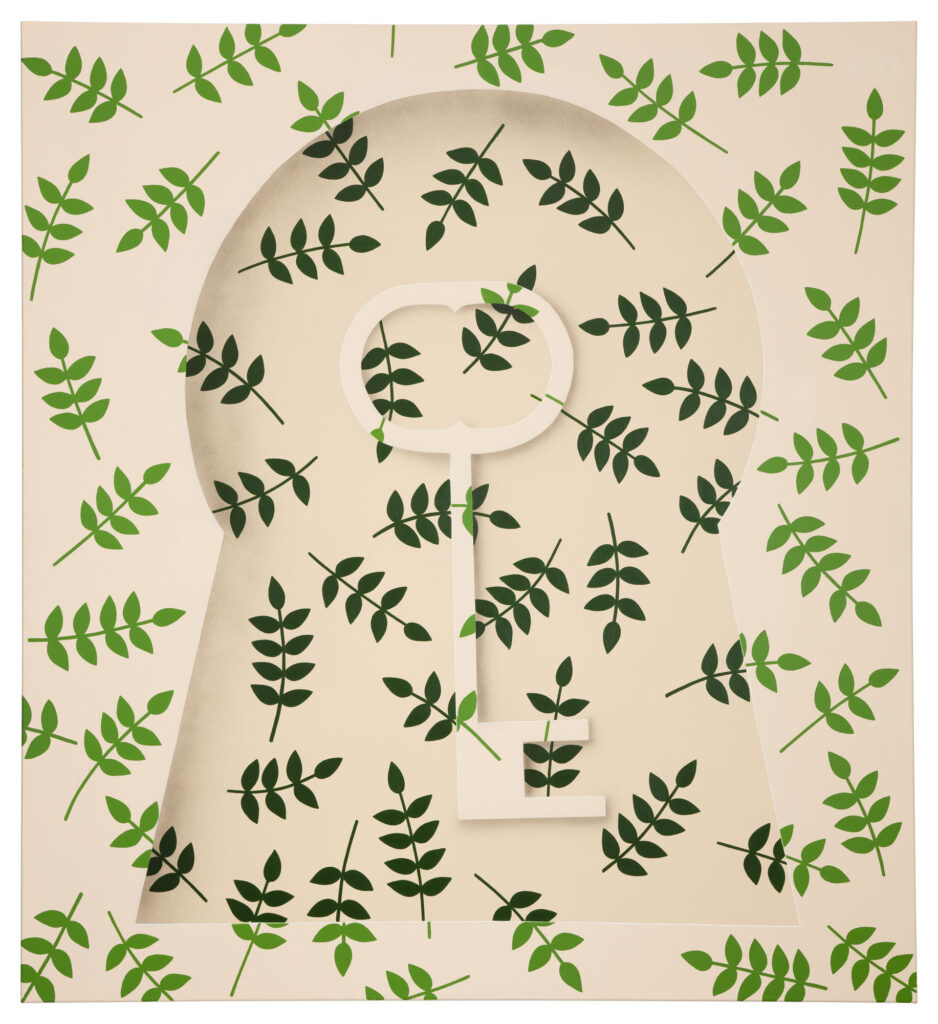 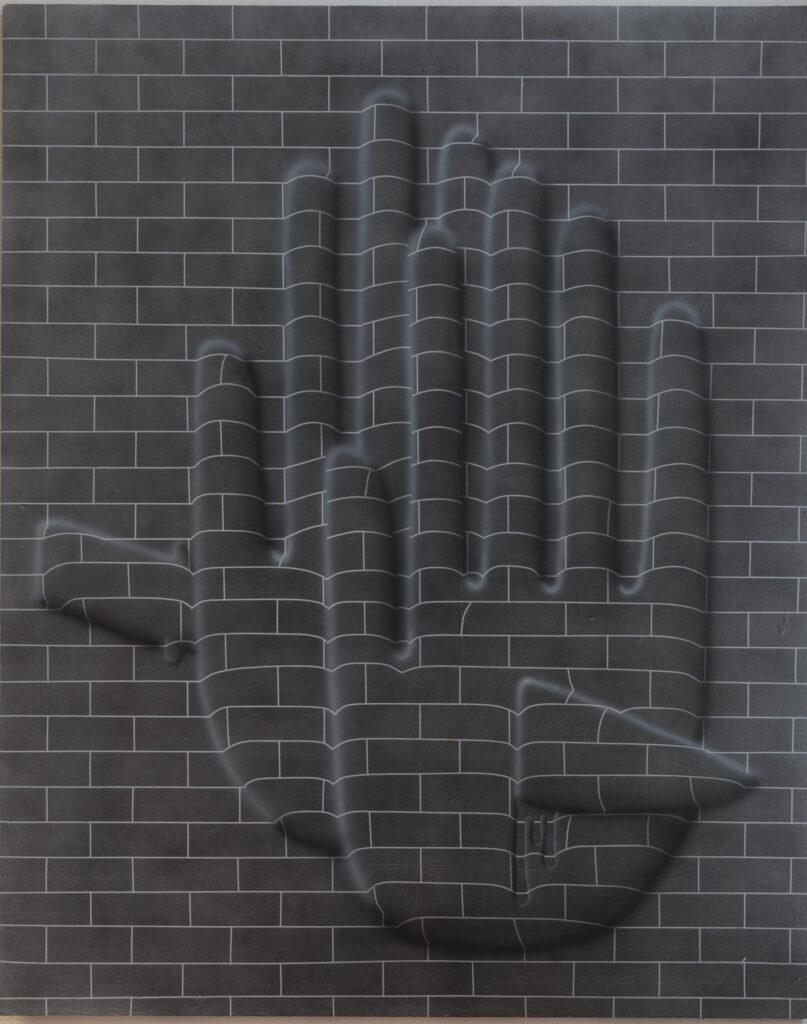 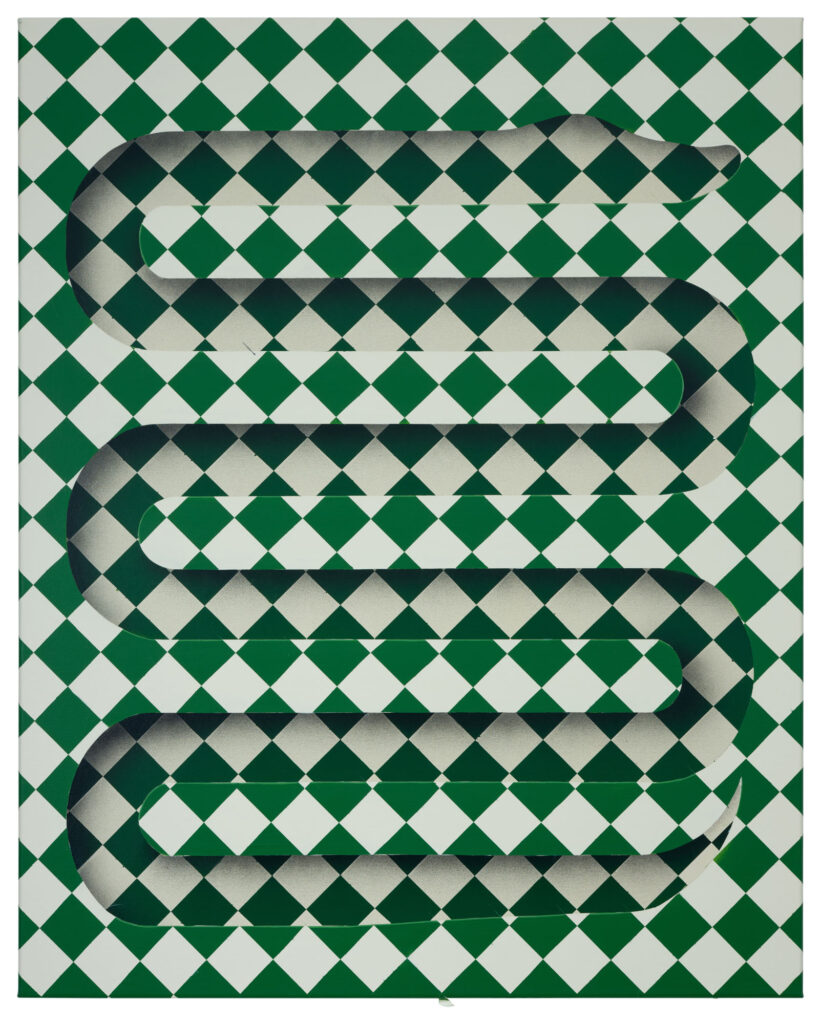 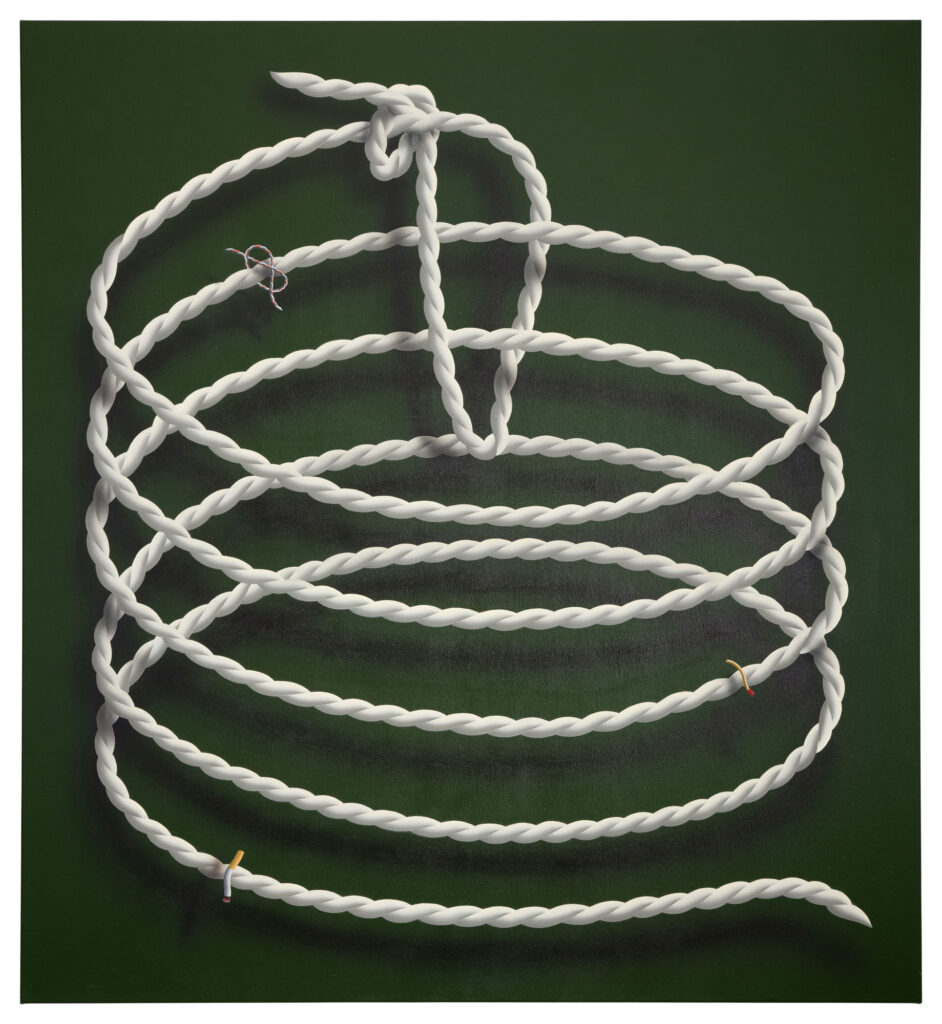 Charline Tyberghein combines these geometric patterns and optical illusions with small, figurative symbols. For these symbols, she draws on her own database, which she has been building for years. The sources of inspiration are very diverse: heraldry and pictograms, the internet, road signs, or advertising. The artist has folders full of images that she arranges according to their form or material.

Tyberghein makes small preliminary studies of each symbol – often on small wooden panels. A survey of nearly 200 of these studies was recently published by Triangle Books. Recurring symbols include a wine glass, a cigarette, matches, drops, a knife or rope, candles, and so on. Tyberghein looks for symbols that she can easily give human traits.

The symbols have no meaning in themselves. You might think that a cigarette, for instance, symbolises a break. But Tyberghein prefers not to assign individual meanings to these symbols. She prefers to approach them like an alphabet. Meaning is created by the relationship of different symbols to each other. The artist sees her paintings as exercises in visually expressing a feeling, without explicitly showing what it is about. 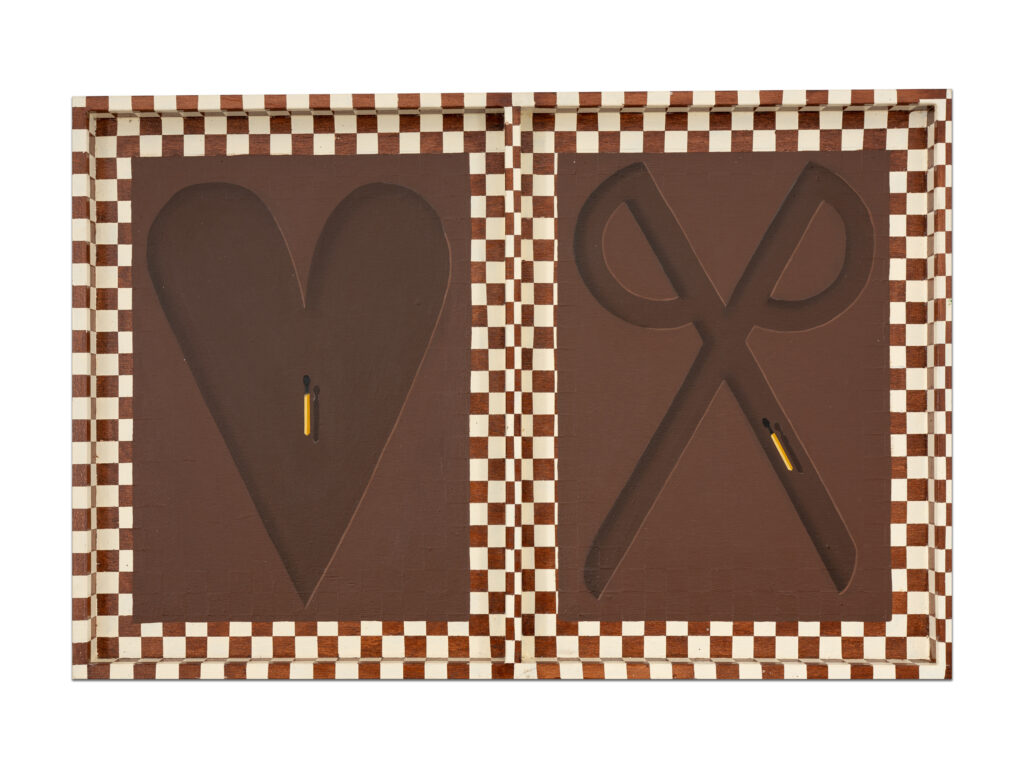 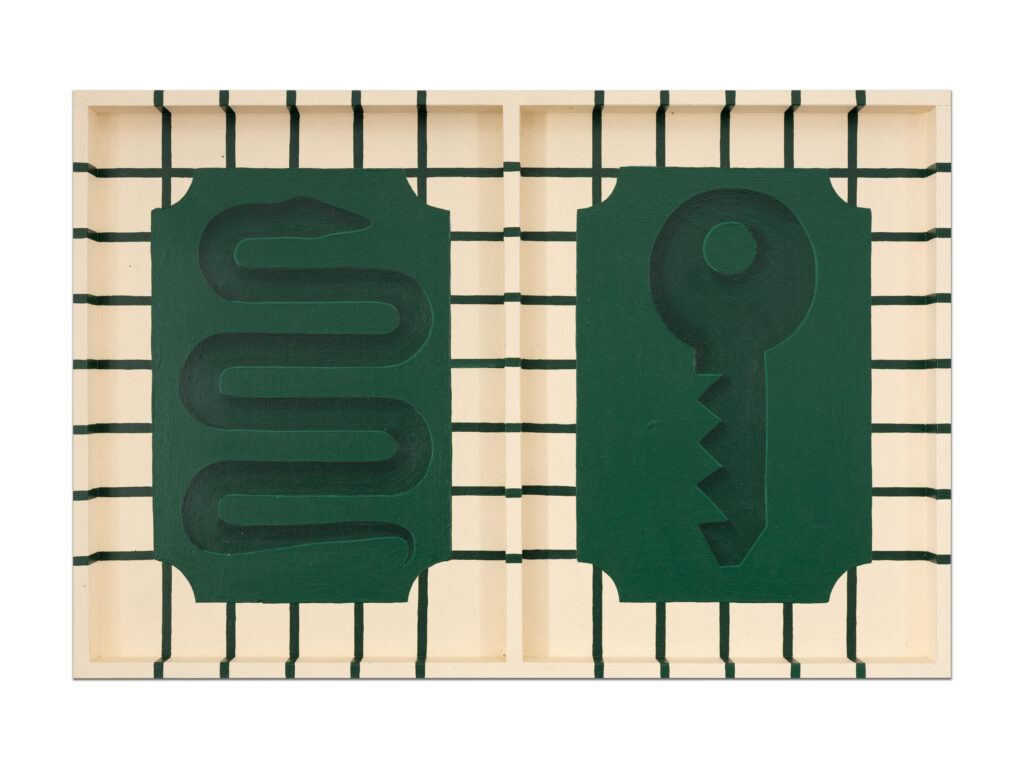 Tyberghein paints her symbols on abstract backgrounds representing wood, brick, or a tablecloth. The background is painted so realistically that it creates interesting imagery that is at once simple and complex (you’re not quite sure what you’re seeing). Tyberghein drives this even further by sometimes also painting the frame of a painting in a pattern, making the boundary between image and object very small. And during her exhibitions, too, she plays with the object character of her paintings, presenting them not purely two-dimensional against a wall but also hanging freely in space, or on a pedestal as a kind of flat sculpture.

For this Billboard Series, Charline Tyberghein painted a pattern strongly reminiscent of a traditional red-and-white chequered tablecloth. On or under the tablecloth are two shapes: a key and an hourglass. Within these shapes, she painted two smoking cigarettes, two extinguished matches, and a noose. Again, an image that initially looks cheerful seems to have darker undertones. All the symbols – hourglass, extinguished match and burning cigarette – refer to temporality. Tyberghein does not want to prioritise meaning – it is up to the viewer to put meaning in what she sees. But in the context of an art project accompanying the conversion of an urban neighbourhood, this ‘momento mori’* is perhaps best read as a celebration of the temporality of the city that is made anew every day.

*’memento mori’ literally means ‘remember to die’, and serves as a reminder that our lives will one day end. 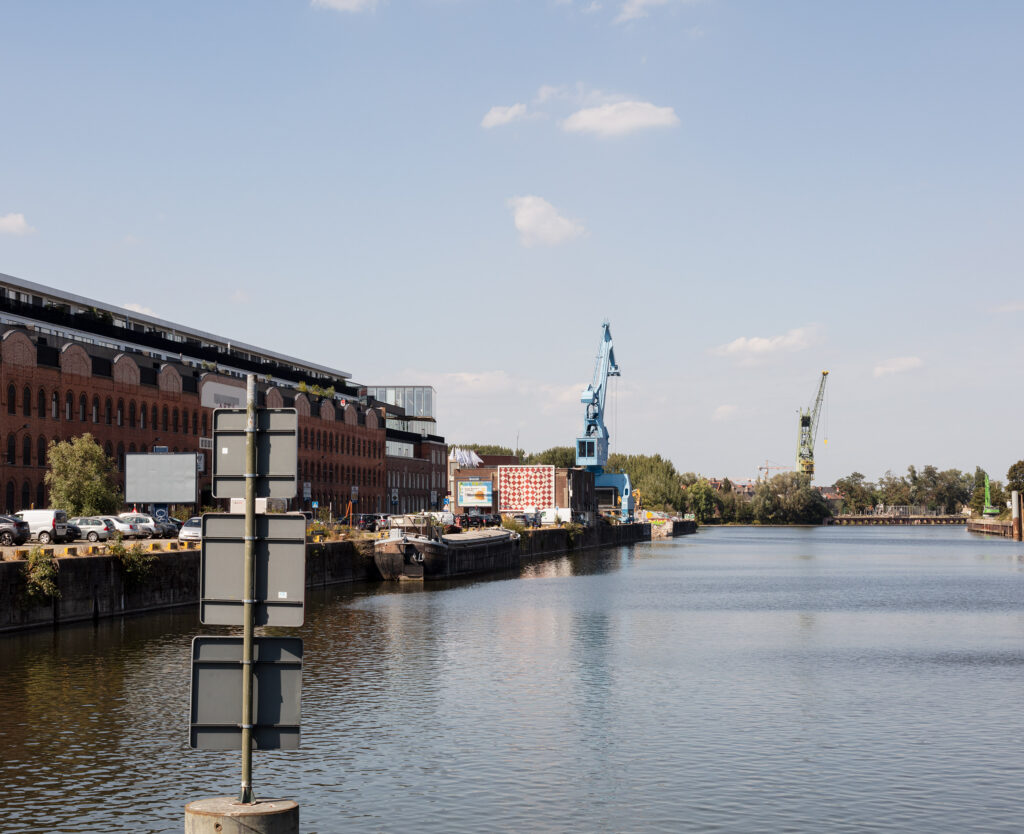 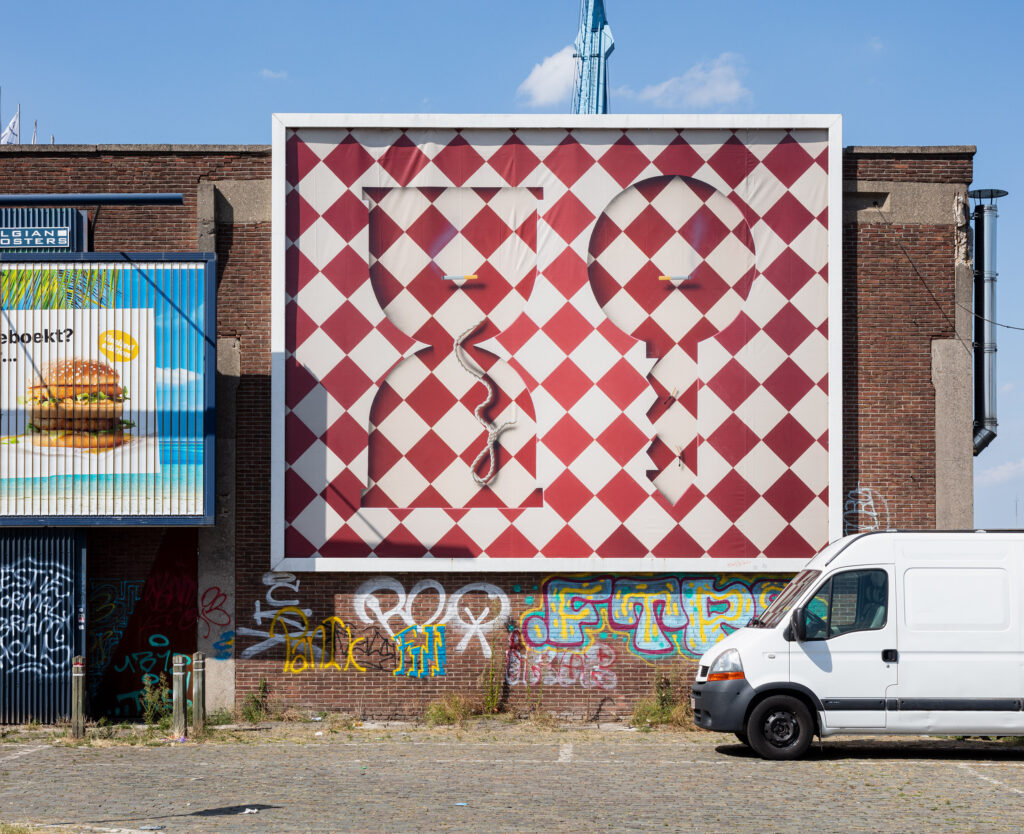