Benoit Platéus (°1972, Liège) is a Belgian artist who uses various media to investigate the disappearance and (re)appearance of the image. He starts from clichéd – typical and recognisable, easy to read  – images, which he then distorts and makes difficult to read in different ways, giving them a completely different, open meaning.

The result of this process can be a drawing, collage, photo, sculpture or painting. This is because Benoit Platéus really digs into the specific characteristics of each medium or technique, in order to explore their limits. Once he feels that he has reached those limits, he continues with another medium. Because of the different media Platéus uses, it may seem as if his different series of works deal with different issues, when in fact, the works always focus on the same thing: making an image disappear and appear simultaneously, in order to expand its content and our reading of it.

Platéus’ most recent works are paintings that hover between figuration and abstraction. During his many trips to the United States, Benoit Platéus became fascinated by the wooden telephone poles he saw in rural areas and the semi-industrial suburbs of cities. These poles are often used as messageboards: people staple messages on them about a lost dog or a bicycle that they’re trying to sell. These paper posters disappear of course, but the artist loved these wooden poles full of staples – as an image in itself, but also because of the lost messages and the staples once held. Intuitively, Platéus started making frottages of the poles. Frottage is a technique where a sheet of paper is placed on a surface and then rubbed over with a pencil or wax chalk, so that the texture or irregularity of the surface transfers a certain image or pattern on the paper. Benoit Platéus then uses these impressionistic frottages as the starting point for large paintings – like a kind of inverted graffiti, where images are taken from the street to the studio and then transformed into an autonomous painting.

Although these paintings are often not immediately readable as images, they still evoke a multitude of references. Depending on the colours used, you see fires, oceans or minerals – or something else entirely. You do not immediately recognize the traces – the staples, nails or unevenness that determine the image – but you can see that these traces in the work undoubtedly refer to something outside the work. 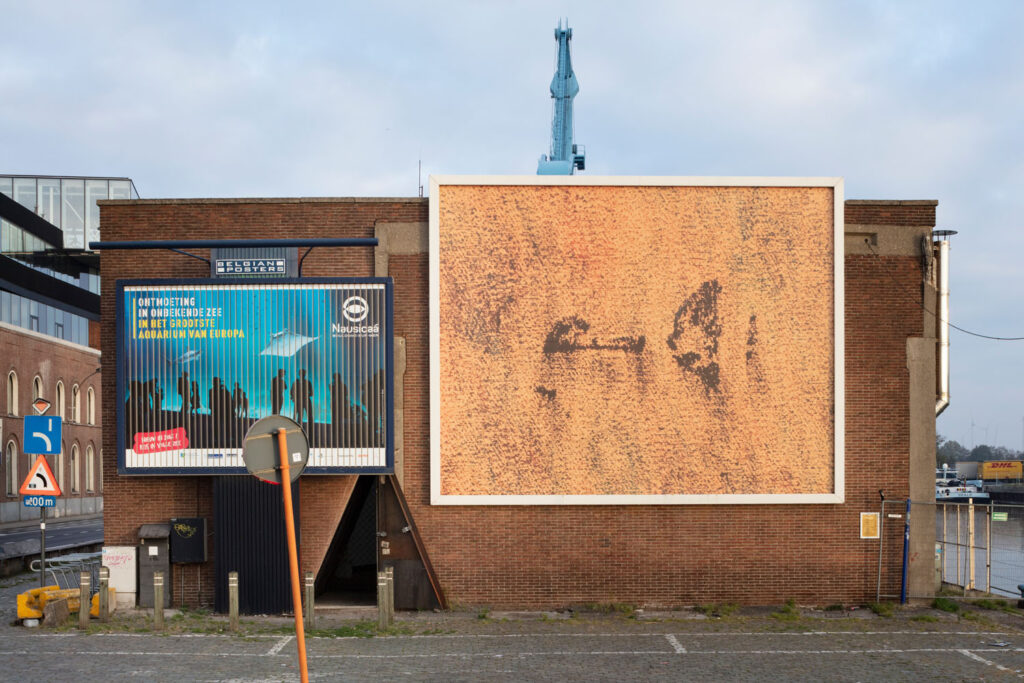 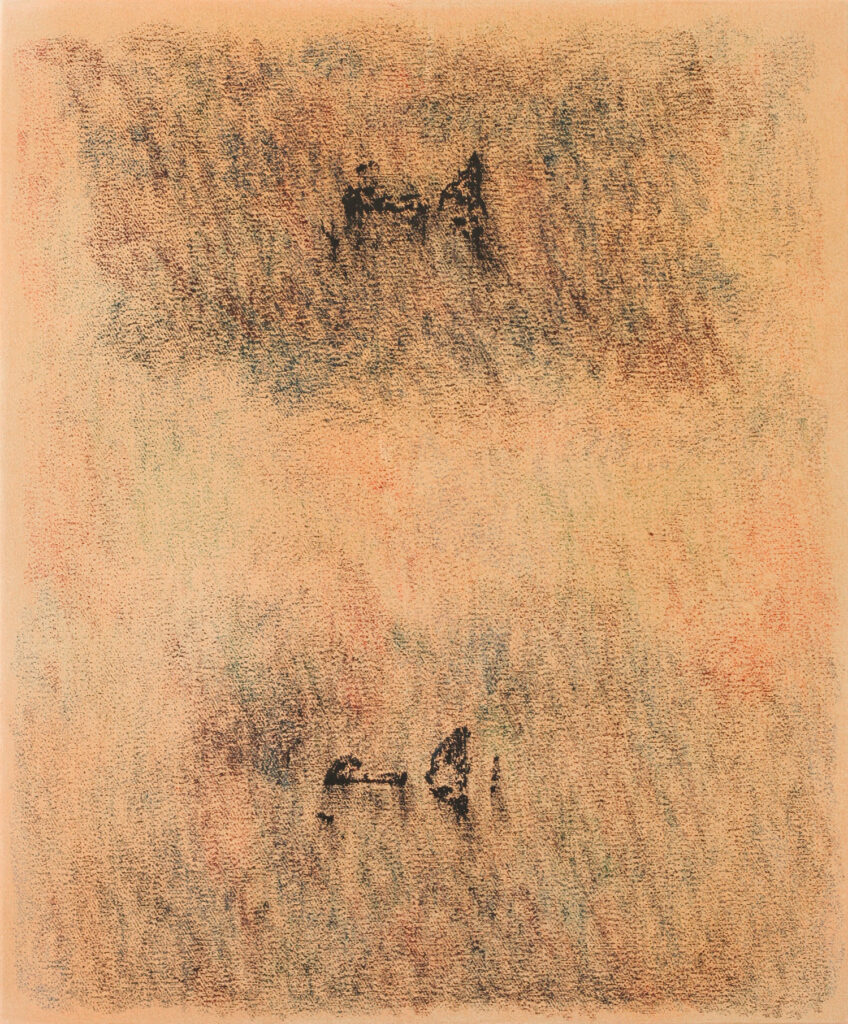 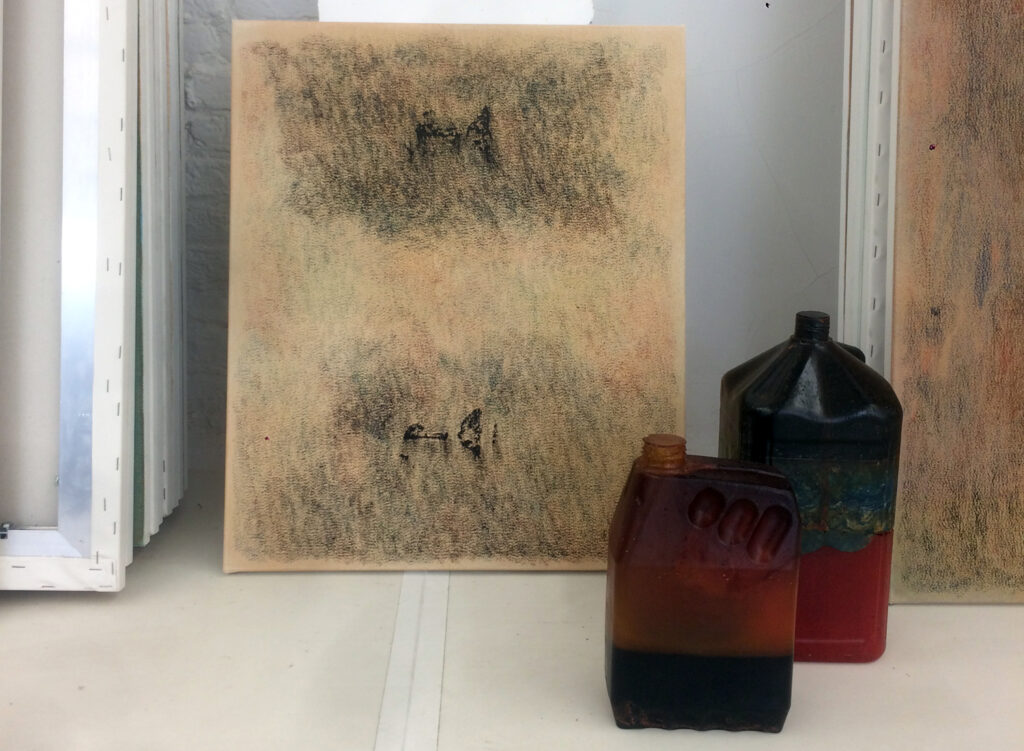 For our 13th Billboard Series, Benoit Platéus created new work that matches these most recent series of paintings – but translated to Ghent. Last summer, the artist spent time in the old industrial harbour around the docks, making a series of frottages of brick walls, ground surfaces and other details of the often rough public space around Dok Noord. He took these frottages with him to his studio in Brussels, and eventually made a painting based on the frottage he made under the old silos of inter-concrete – on the Schipperskaai. A small detail of the ground – a piece of metal, a screw or rivet – captured by frottage with a thick pastel pencil, was thus translated onto canvas. Now that this painting appears as a billboard on Dok Noord, one of these works returns for the first time to public space – where the origin of the image lies. Billboard Series becomes, as it were, a magnifying glass, showing a small detail from the public space: you still feel the materiality of the frottage, and the dirt, concrete and steel of the ground here in the old industrial harbour, but at the same time you also look at something else – something that only you can see.