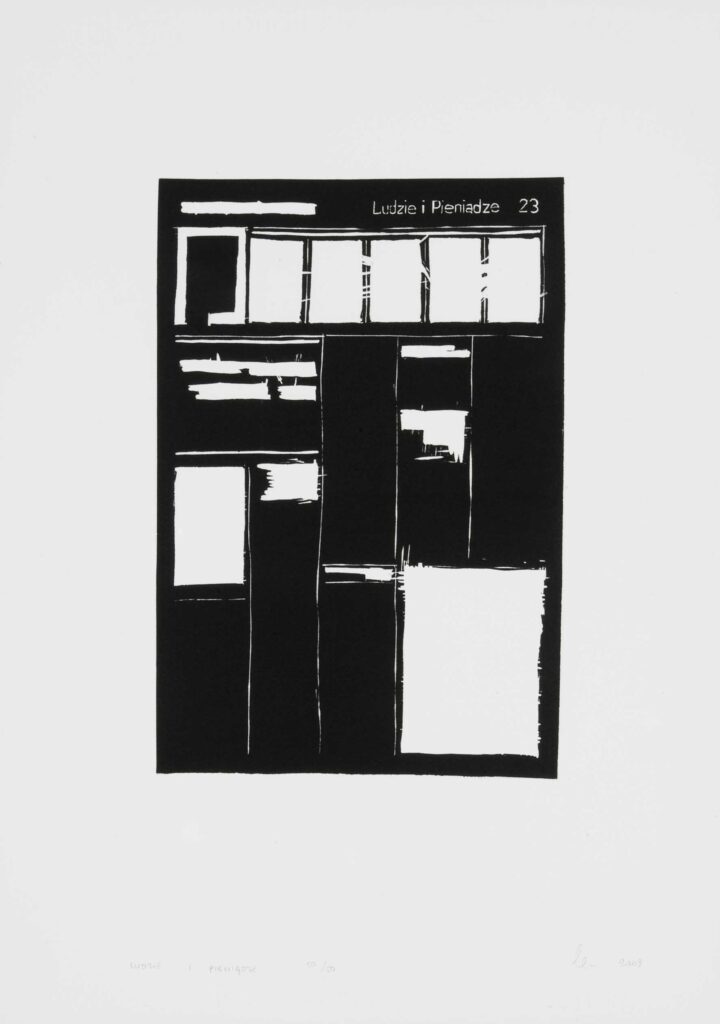 Wilhelm Sasnal is best known as a prolific painter who blends figuration and abstraction to depict a wide range of subject matter. In the black and white print People and Money (2009) he shows his consistent interest in the social, economic and political history of Poland, his country of birth.

Wilhelm Sasnal is a painter who approaches the medium as a formal exercise. In a visual culture flooded by photographic images, Sasnal’s work attests to the continuous spellbinding power of painting. His paintings chronicle the complex experience of life today: more or less banal everyday objects, portraits of historical figures, 20th century propaganda, photojournalism, views of his hometown Cracow, snapshots of friends and family members. Existing images from the internet or mass media very often function as his starting point.

By filtering it through mass media association, Sasnal deconstructs the hierarchy of ’high culture’. Through painting he explores his own interpretation and understanding of the imagery. His work constantly questions the space between ‘personal’ and ‘public’, and strives to define individual experience within a world order of collective consciousness.

Even if, over the years, one can make out a number of overarching themes, there are always new paintings that shift the emphasis and connections once again. The same is true of his painting style. His approach is unpredictable and his methods range from graphic reduction and a pointedly two-dimensional, illustration-oriented style to seemingly autonomous gestures with brush and paint. Images are pared down to their barest essentials and estranged from their original context and meaning.

Among others, his work can be found in the collections of Guggenheim, New York; Saatchi Gallery, London; Tate Modern, London; and The Museum of Modern Art, Warsaw.

Wilhelm Sasnal is represented by the following galleries;
click through to discover more of his work.