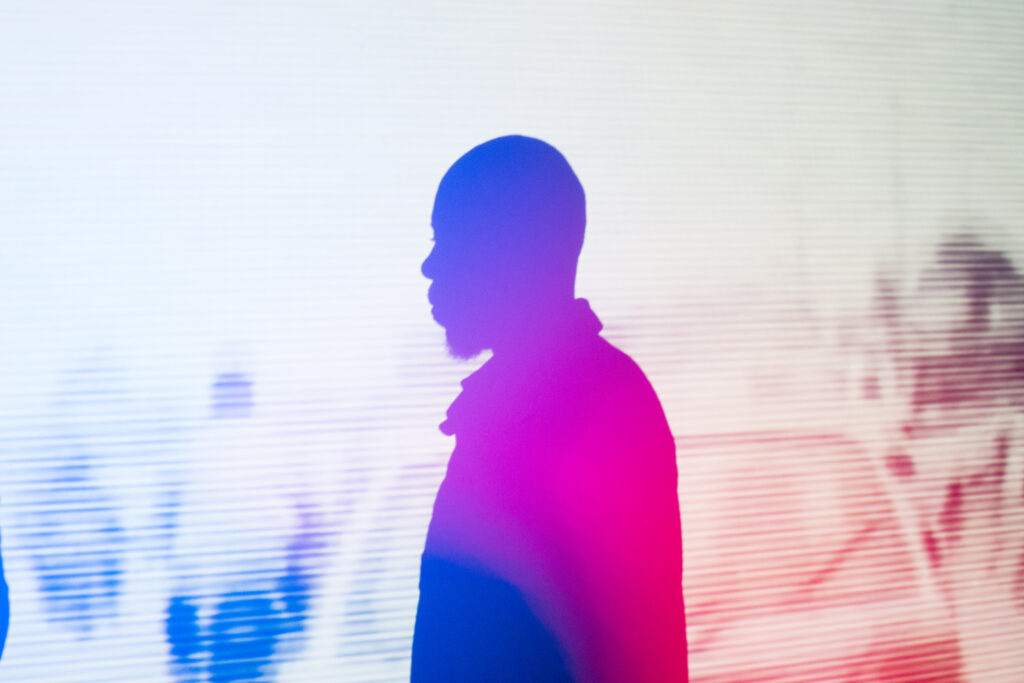 Edition of 100 copies, numbered and signed by the artist on verso side

The work of German artist Tobias Zielony is based on a complex understanding of his prime medium, photography – one that engages with this art form’s documentary tradition. With attention to the formal aspects of the photographic picture, Zielony’s work zeroes in on the dynamics of the social sphere; an approach that also shows in his contribution for the 2015 German pavilion at the Venice Biennale, in which he portrayed refugees and migrants who live in Germany.

This ecition is connected to this long term project, Zielony superimposes multiple levels of form, medium, and our political present. The artist took this digital image during a screening that he organized at B movie in Hamburg, an independent cinema that draws a critically-engaged audience. The photograph captures the silhouette of a man standing in front of a screen, and, subtly, also the concrete spatial conditions within that institution at the moment of the screening – the red and blue halos emit from a lighting system installed on a stage next to the projected image. We further see a shot from the film on view, Jean-Pierre Bekolo’s Le président, a parable on the political conditions in Cameroon, where this work has been censored. Screen thus records not only a medial encounter of photography and film, but also the circumstances under which art can intervene politically – for example, through facilitating, making visible, or remembering acts of political resistance.

Tobias Zielony is known for his photographic depiction of juvenile minorities in suburban areas – a subject he already set out with during his studies. For his first book project Behind the Block (2004) he extended his research to a total of four European cities to observe adolescents in public spaces often during night times. Themes and social realities his research touches upon include structural change, migration and drug abuse, as well as sexwork as shown in Big Sexyland (2006-2008) and Jenny, Jenny (2013). For Manitoba (2009-2011) Tobias Zielony spent time with adolescents of indigenous origins living in Winnipeg and the province of Manitoba, Canada.

His critical approach to documentarism manifests in a specific aesthetic and relationship with fiction. People are often portrayed in a casual fashion that is sensitive of the visual language, gestures and poses a person uses to set their stage.