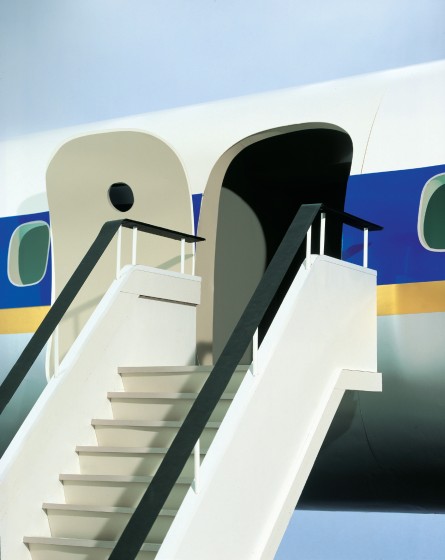 Edition of 75 copies, signed and numbered by the artist on a certificate

This edition is published by Parkett

In Gangway the open empty doorway of a generic passenger jet rendered both unspectacular and uncanny. Any number of famous people might have stood waving from the top of the stairs, but the source for the work is supposedly a news photograph of Pope John Paul II visiting Berlin.

This Parkett edition is part of the MoMa collection.

Regarding photography as a “constructed reality,” Demand starts with a preexisting image usually, but not always, culled from the media. These can be scenes from German history as well as from current events, such as the 2000 American presidential election. He then translates the images into life-size paper models, using colored paper and cardboard to re-create entire rooms, parking lots, facades, and hallways and to simulate such diverse materials as wood, plastic, metal, and cloth. Despite the illusions he creates, the artist deliberately leaves minute imperfections visible, and the lack of detail and the uniform lighting reveal the models as constructions. The resulting photograph challenges the viewer’s perception of reality. Once photographed, the models are destroyed.

Initially trained as a sculptor, Demand began photographing his ephemeral constructions for documentation, but by 1993, the paper constructions were designed expressly for photography. He photographs the models with a large-format camera equipped with a telescopic lens for enhanced resolution and heightened realism. The large-scale photographs are displayed behind Plexiglas and without a frame.

Thomas Demand is represented by the following galleries;
click through to discover more of his work.

You can also discover more of Thomas Demand’s work on his own website.

The Boat is Leaking. The Captain Lied. – at Fondazione Prada, Venice

Venice Biennale 2017 – Part III: What not to miss around town