The Boat is Leaking. The Captain Lied. – at Fondazione Prada, Venice

The Boat is Leaking. The Captain Lied. is a transmedia exhibition project, the result of an ongoing, in-depth exchange between writer and filmmaker Alexander Kluge, artist Thomas Demand, stage and costume designer Anna Viebrock and curator Udo Kittelmann. The exhibition unfolds on three storeys of the 18th century palazzo – the ground floor and the two main ones – and include photographic and film works, as well as spatial settings and loans from private and public collections.

The long process which led to the realization of this project is not only the result of discussions and exchanges between the authors involved in it, but also the outcome of a misunderstanding. The sharing of a reproduction of a painting by Angelo Morbelli Giorni… ultimi! (1883), generated in the three artists and in the curator different interpretations of its subject, which depicts a group of elderly destitute men within the Pio Albergo Trivulzio in Milan. More specifically, the portrayed individuals had been mistaken for retired sailors spending their old age at the hostel. This suggestion not only caused the marine metaphor in the exhibition title, inspired by Leonard Cohen’s song Everybody Knows (1988), but also the choice to devote a monographic room to Morbelli, hosting seven of his works.

Quoting William Shakespeare’s Julius Caesar “Why, now blow wind, swell billow, and swim bark! The storm is up, and all is on the hazard”, Udo Kittelmann underlines how this collaboration generated out of a “shared awareness, both on an emotional and theoretical level, of the critical aspects of present times and the complexity of the world we live in”. In a dialogue of polyphonic references and constellations between the contributions of each artist, the exhibition spans film, art and theatre media. The confluence of image spaces and scene settings for a variety of atmospheres transforms the historic palazzo of Ca’ Corner della Regina into a metaphorical site for the identification of the worlds we live in and our personal attitudes towards them. The exhibition aims to provide comprehensive insight into the respective production of Alexander Kluge, Thomas Demand and Anna Viebrock, whose artistic endeavours have always extended beyond the aesthetic and imaginative, and were conceived with political and historical intentions. All three artists reveal themselves as pathfinders and clue seekers, witnesses and chroniclers of times past and present.

Out of this, an exhibition is generated, intended as a space for experiences and encounters. This visually powerful, multi-layered environment bestows expression and meaning on the everyday and on the worlds of yesterday and today, between apparent normality and catastrophe, in a society divided between lust for life and loss of trust, extreme distress and never-ending hope.

As stated by Kittelmann, “It is a particularly lucky coincidence that Alexander Kluge’s filmic production, Thomas Demand’s photographic work and Anna Viebrock’s stage settings are brought together in this collective exhibition concept, melding what are usually distinct artistic forms of expression. Until now their different creative fields have prevented them from engaging in this kind of symbiotic collaboration, even though they know one another personally and have often exchanged ideas.”

In The Boat is Leaking. The Captain Lied. each visitor can create its own narration in complete freedom, physically and conceptually moving through the visual imagery of the three artists. Through this, three commonly accepted ideas are questioned: the traditional separation between spectators and theatre set designs, the reduction of filmic products to mere exhibited objects and the visual isolation where artworks are usually presented within a show. 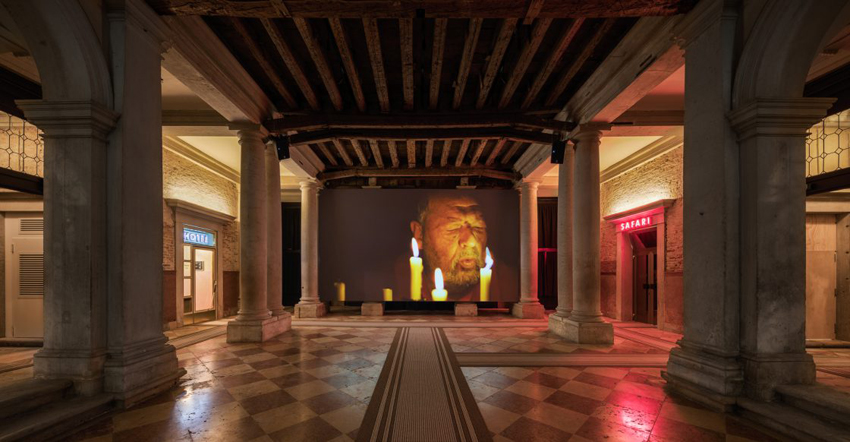 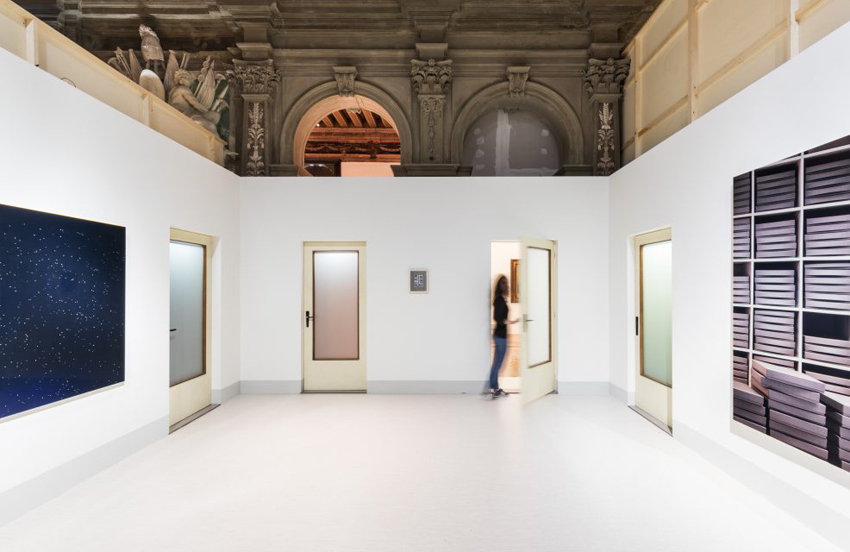 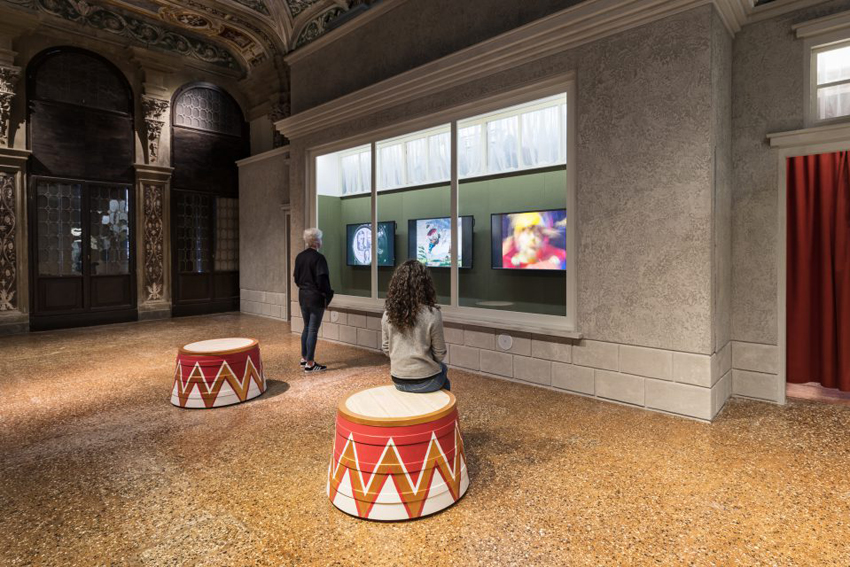 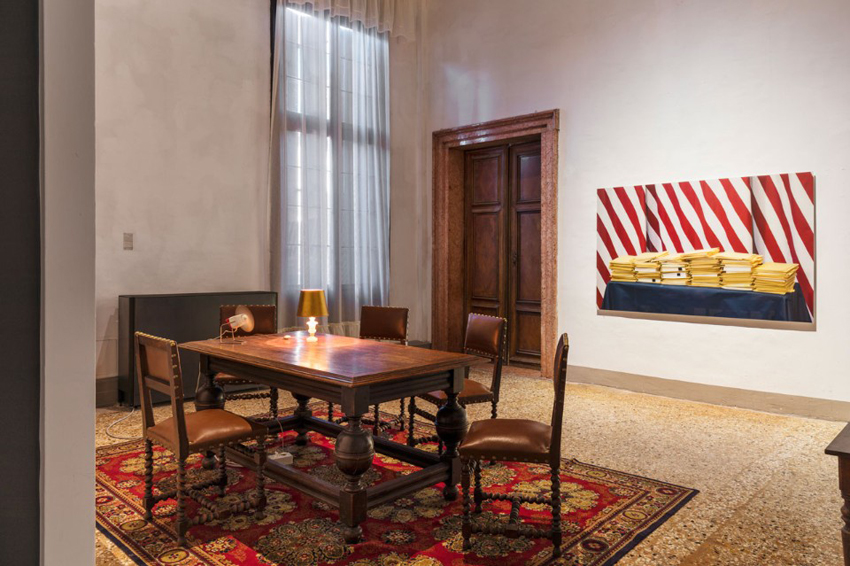 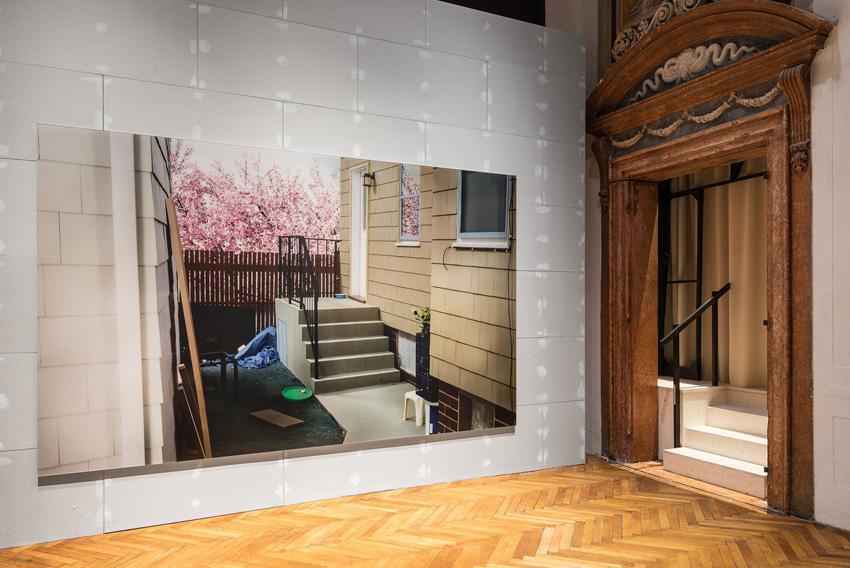 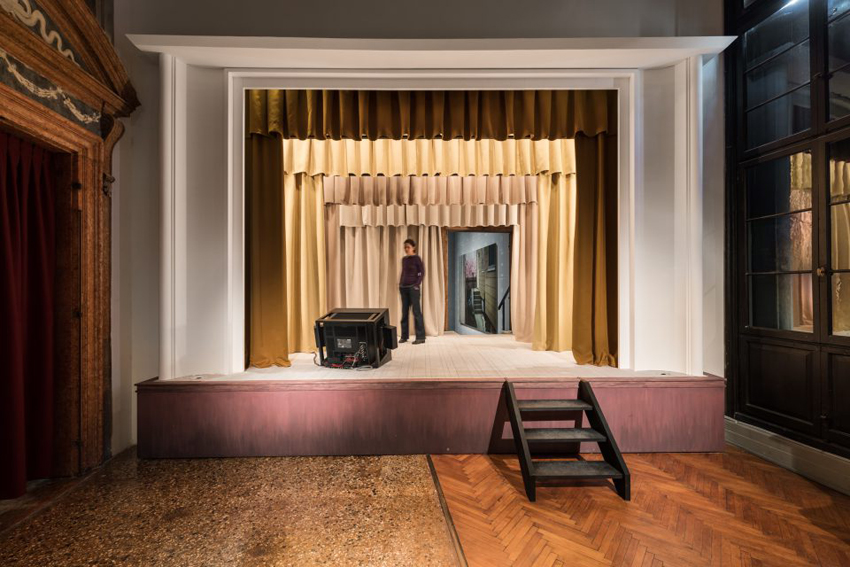 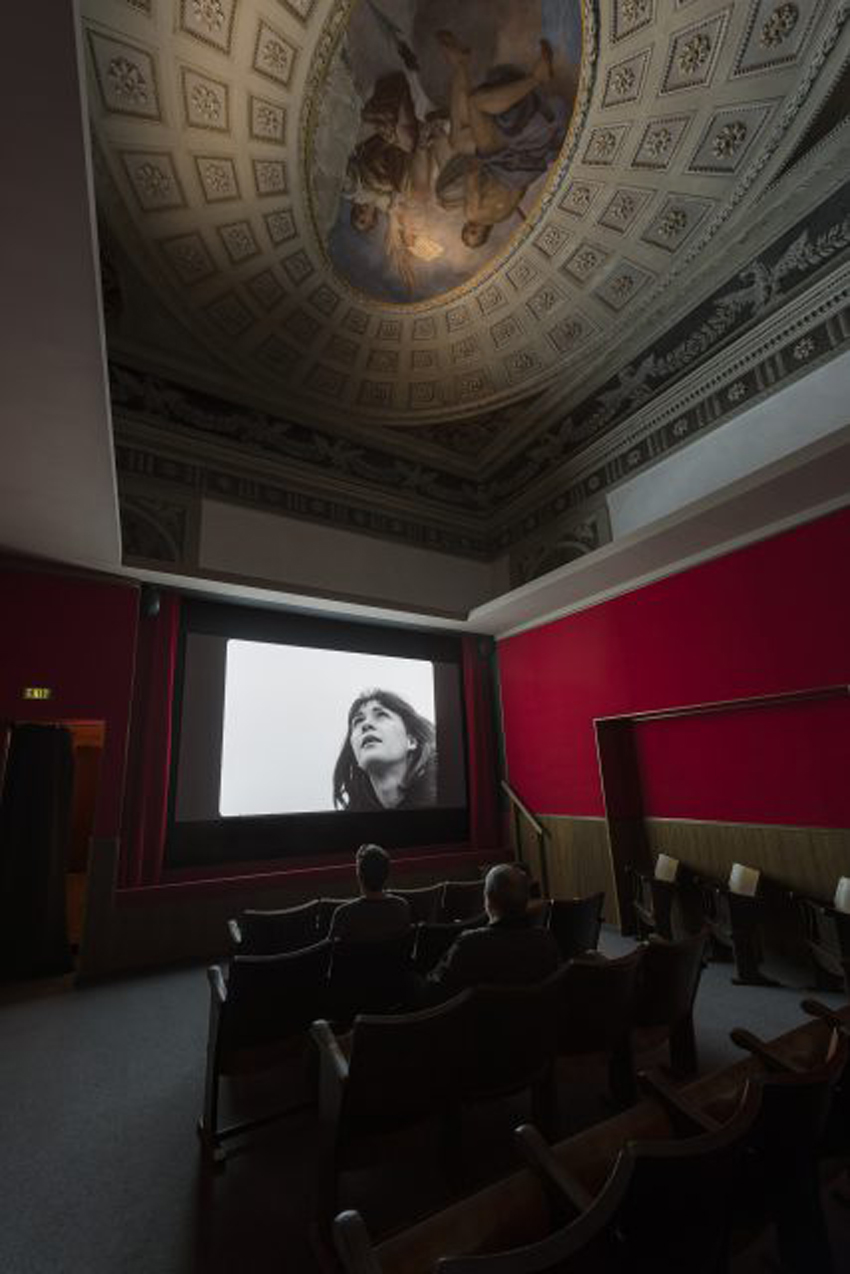 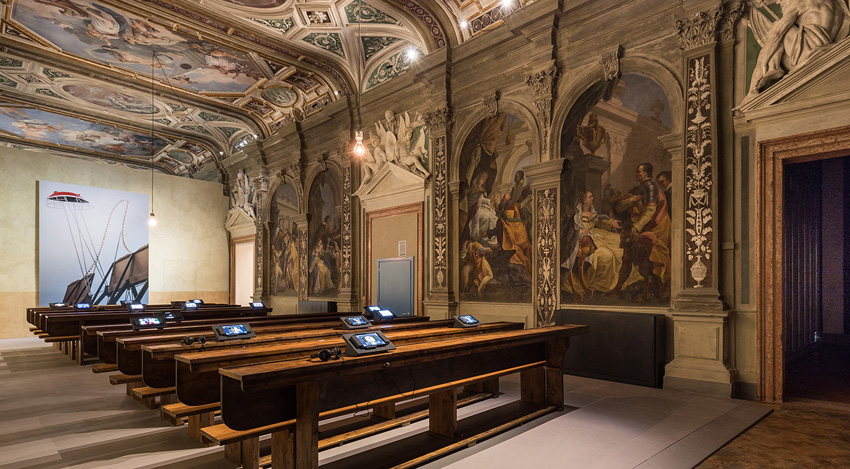 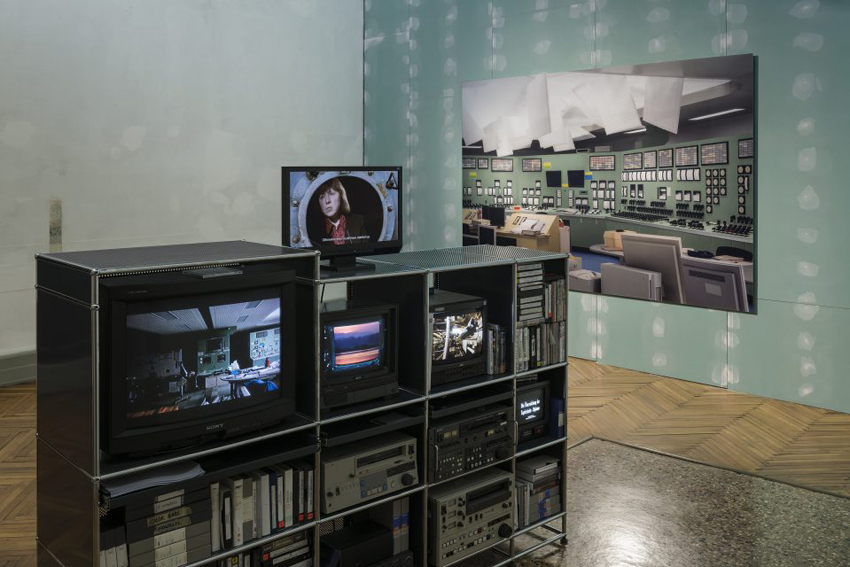 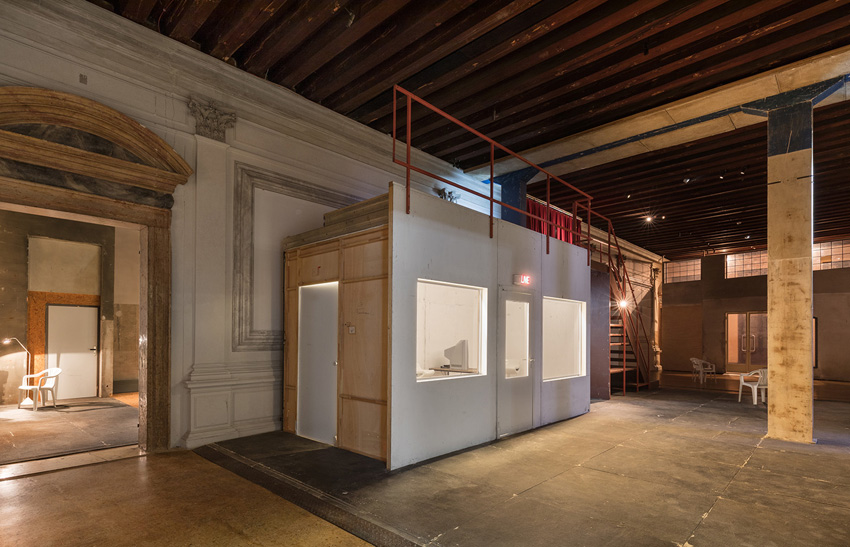 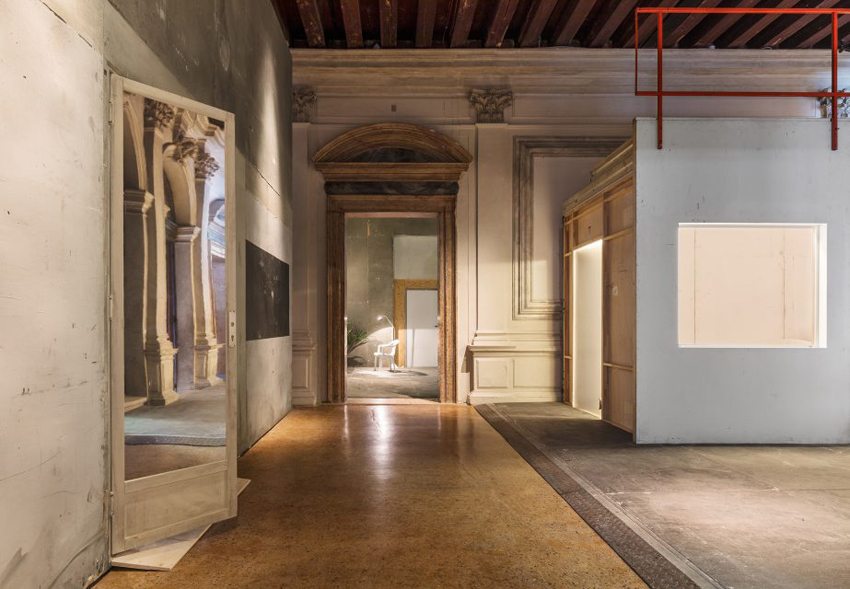 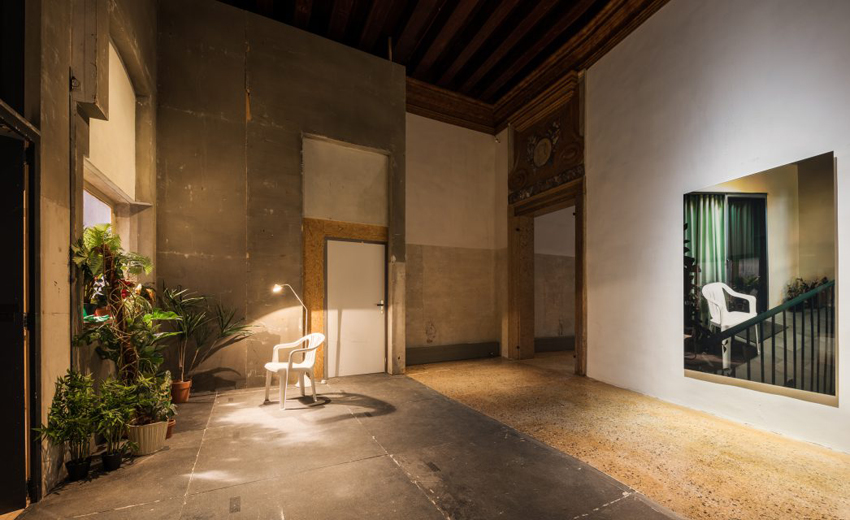 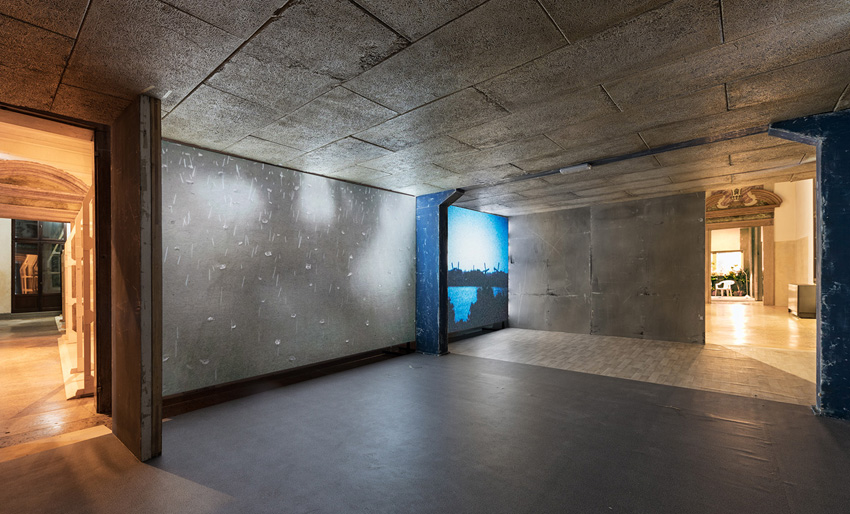 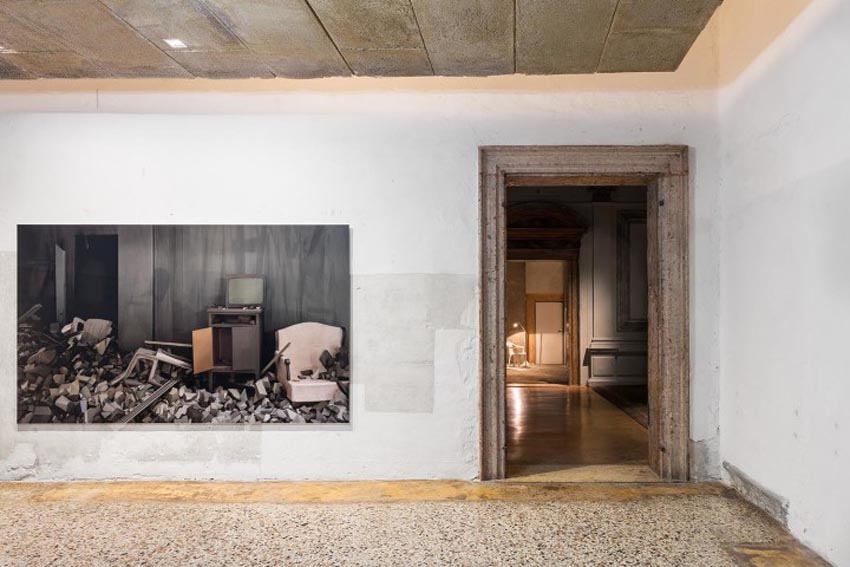 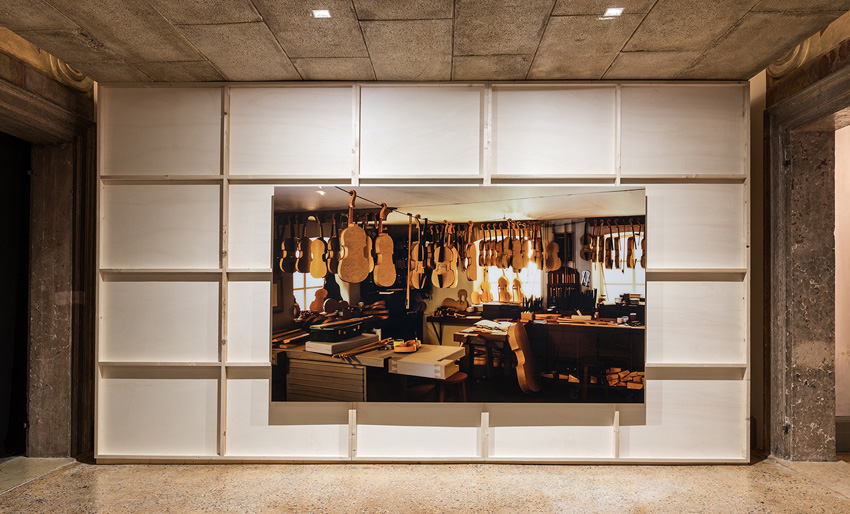 The Boat is Leaking. The Captain Lied.

Courtesy of the artists, Udo Kittelmann, and Fondazione Prada