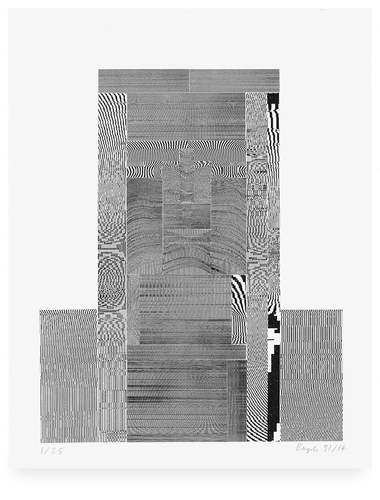 And Back Again – Helke II

From A to B – Helke I / And Back Again – Helke II (1991/2014) were published by Triangle Books in Brussels and each come with the publication Atari Faces by Thomas Bayrle.

Atari Faces presents the complete series of collages, which Bayrle made between 1988 and 1991 when he started experimenting with digital technology with the help of Stefan Mück, then his student at the Städelschule in Frankfurt. As a way to continue Bayrle’s manual rubber distortions, Mück created software for an Atari computer, which created similar effects.

Thomas Bayrle is a pioneer of Pop, seriality and Media Art. Since the beginning of his career in the 1960s, he developed an interest for mass gatherings, mass production and mass society, visually translated into large forms, grid-like macrostructures. As such, Bayrle invented a unique visual language through the production of collages, paintings, sculptures, films and books, while combining allegiances to Pop, Conceptual and Op art with wry humour. All along his work retained the critical engagement that drove his earliest experiments. In his recent installations, Bayrle has turned again towards the engine as a singular object and kinetic sculpture.

His work has been shown in several group exhibitions at venues such as Tate Modern, London; Stedelijk Museum, Amsterdam; Museum Abteiberg, Mönchengladbach; and Palais de Tokyo, Paris. He also participated at the documenta (13) in Kassel in 2012 and the 50th and 53rd Biennale di Venezia in in 2003 and 2009.

Thomas Bayrle is represented by the following galleries;
click through to discover more of their work.

Other works by Thomas Bayrle