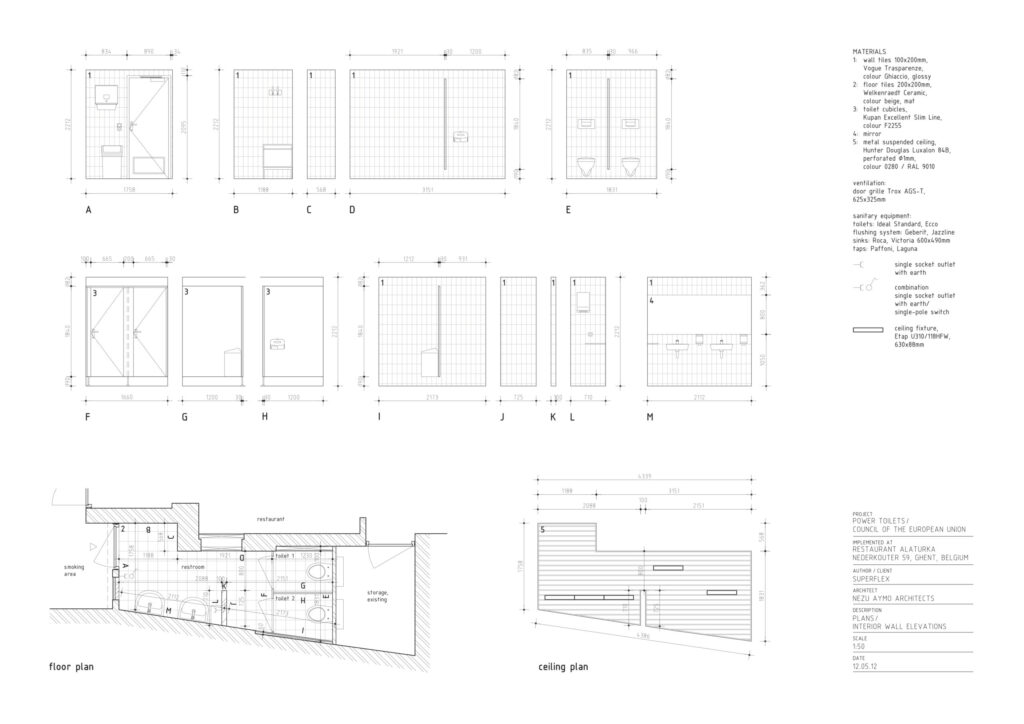 Edition of 60 copies, signed and numbered by the artist

Power Toilets Council of the European Union consists of the architectural plans of the Ministers’ restroom in the Justus Lipsius Building, Council of the European Union in Brussels. Superflex made a copy of these toilets and installed them for public use inside the Turkish Restaurant Alaturka, Ghent. This work is part of a larger series of exact replicas of toilets from power-locations such as the United Nations Security Council headquarters in New York, the New York JPMorgan Chase headquarters or the Executive Board of the UNESCO headquarters in Paris, which are being made accesible to a broad public.

Power Toilets Council of the European Union (2012) was part of a portfolio that was produced on the occasion of the major international group exhibition TRACK held in Ghent in 2012, which they participated. TRACK was organized by S.M.A.K., Ghent.

Superflex is a Danish collective founded in 1993 by the artists-designers-activists Jakob Fenger (°1968), Rasmus Nielsen (°1969) and Bjørnstjerne Christiansen (°1969). Superflex makes suggestions for social and economic changes. It does not produce works of art as such, but ‘instruments’, consisting of an assortment of productions including the internet TV channel Superchannel (2000), the Supergas energy provider (2000) and the free Marchandise Shop (2005).

Superflex also generates critical projects concerning copyright, creative commodities and brands. Their instruments are interventions that take many forms and expose power, conviction and oppression. A very well known project is Flooded MacDonald’s (2008); an aesthetically astounding Hitchcockian video showing a hyper-realistic replica of an old-fashioned McDonald’s as it slowly but surely floods.

Superflex is represented by the following galleries;
click through to discover more of their work.