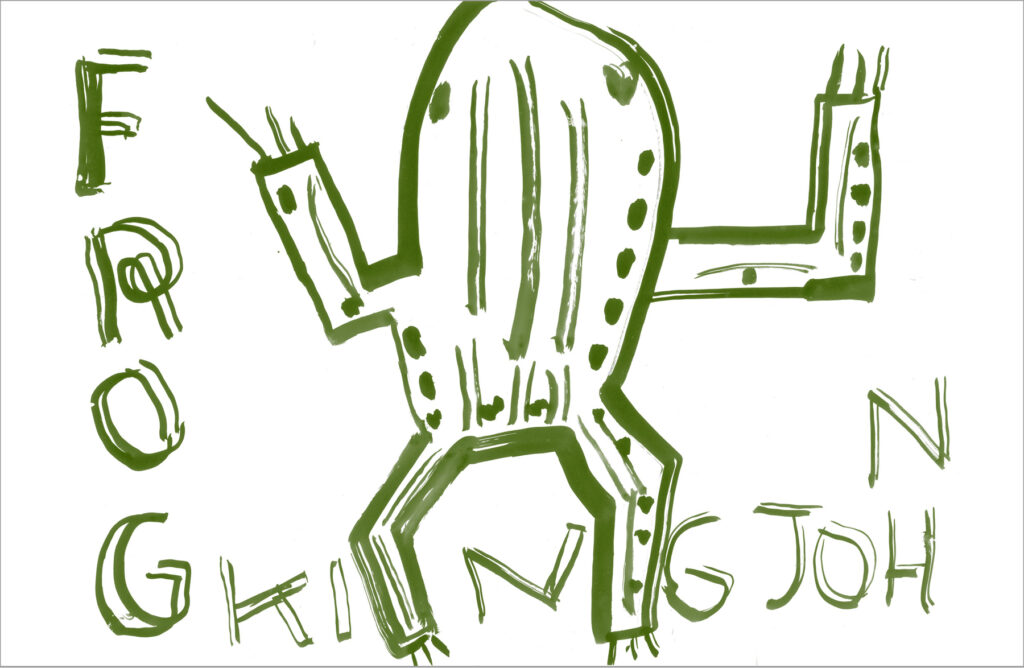 Edition of 85 copies, signed and numbered by the artist

This edition is published by The Hepworth Wakefield

This edition is part of School Prints, a series produced by the Hepworth Wakefield, reviving a groundbreaking scheme set up in the 1940s to supply original, high-quality contemporary art to primary schools.

About this edition, Rose Wylie says: “I like frogs, there don’t seem to be a lot about any more. This image was triggered by a television programme on King John, who was not popularly considered a ‘good’ king at the time. The story has it that some monks decided to get rid of him by extracting poison from a frog, disguising it in wine and offering it to a travel-worn king. So this frog is both historically fixed and an example of a contemporary frog drawing, similar to that shown on the programme to catch and embody the historical fact. A suitable subject for schools… green colour for frogs, lateral politics and endangered species; with an apparently random ‘King John’ written into the print, but in fact there to establish connection and scholarship, and to encourage discussion.”

The starting point for Rose Wylie´s large-scaled paintings are generally her personal memories and experiences, which she combines with impressions from a wide range of visual culture, from contemporary Egyptian wall paintings and Persian miniatures to films, news stories and celebrity gossip. In this way, Wylie provides, with her direct and naïve painting and fresh and unconventional subject matter, an ironic commentary on contemporary visual culture.

Rose Wylie has had numerous solo exhibitions, including shows at Tate Britain, London; Douglas Hyde Gallery, Dublin; Jerwood Gallery, Hastings; and Städtische Galerie, Wolfsburg. Her work has been shown in several group exhibitions at venues such as The Drawing Room, London; The Approach, London; and NMWA Museum, Washington. Her work is represented in many important public collections such as the Arts Council of England, London; York City Art Gallery, New York; and University College, Oxford.

In 2011 Rose Wylie was a recipient of the Paul Hamlyn award.

Rose Wylie is represented by the following galleries;
click through to discover more of her work.

What booths not to miss during this year’s Art Rotterdam?