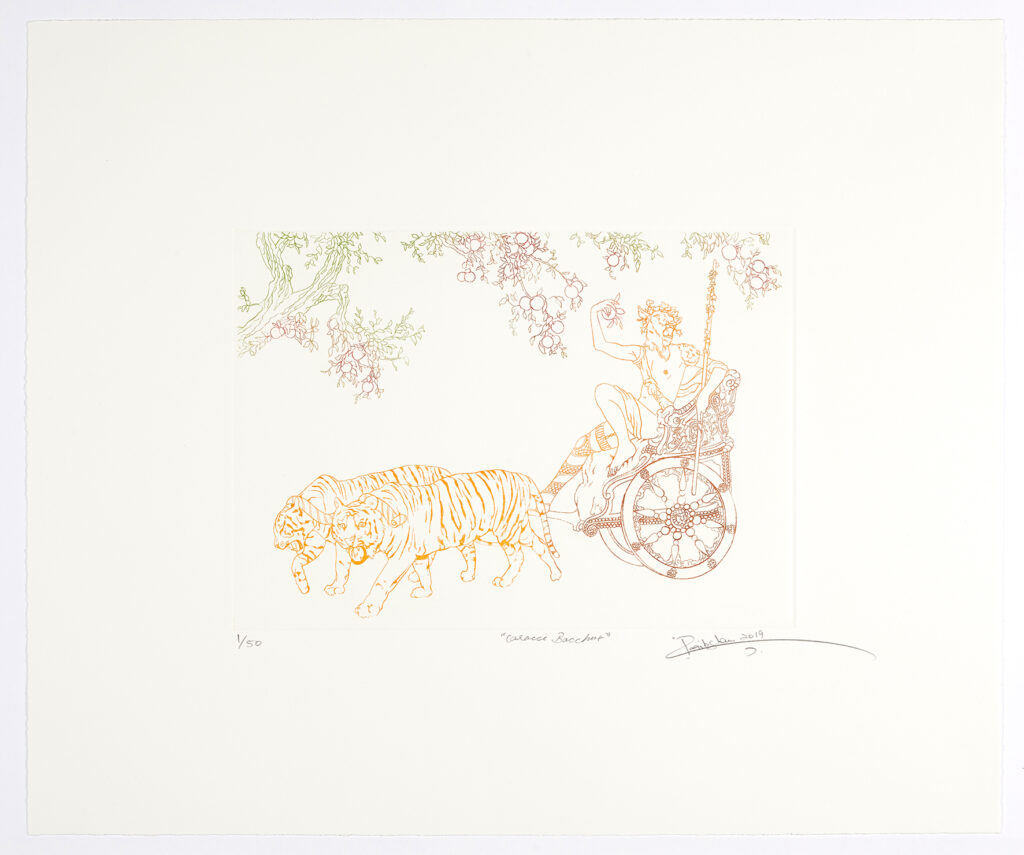 This print features a scene taken from one of Raqib Shaw’s most recent paintings, titled The Martyrdom of Icarus (After Honthorst and Carracci), a painting which was partly inspired by Annibale Carracci’s Triumph of Bacchus and Ariadne. Shaw often depicts otherworldly and fantastical scenes with a number of mythological and literary characters that represent puzzling and provocative themes. Etching a la poupée is a method where all the colours are applied to one plate with twists of cloth and the image is printed in one pull.

Raqib Shaw’s gloriously opulent paintings suggest a fantastical world full of intricate detail, rich colour, and jewel-like surfaces, all masking the intense violent and sexual nature of its imagery. Inspired by Hieronymous Bosch’s fifteenth-century visionary triptych, Shaw’s series of works similarly titled ‘Garden of Earthly Delights’ celebrate a society free of any moral restraint. Populated with a wealth of hybrid creatures, Shaw portrays a dizzying scene of erotic hedonism, both explosive and gruesome in its debauchery. Fusing an array of vibrantly painted flora and fauna, Shaw creates an eco-system inhabited by figures such as phallus-headed birds, bug-eyed butterfly catchers, reptilian warriors or monkeys holding parasols, anthropomorphic in their gestures and regalia.

Shaw’s unique technique, where pools of enamel and metallic industrial paints are manipulated to the desired effect with a porcupine quill, meticulously enhances numerous details within the paintings, such as coral, feathers or flowers. Every motif is outlined in embossed gold, a technique similar to ‘cloisonné’ found in early Asian pottery, which is a source of inspiration to Shaw, along with Uchikake (Japanese wedding kimonos), Byobu (screens), Hokusai prints, Kashmiri shawls, medieval heraldry and Persian miniatures, carpets and jewellery.