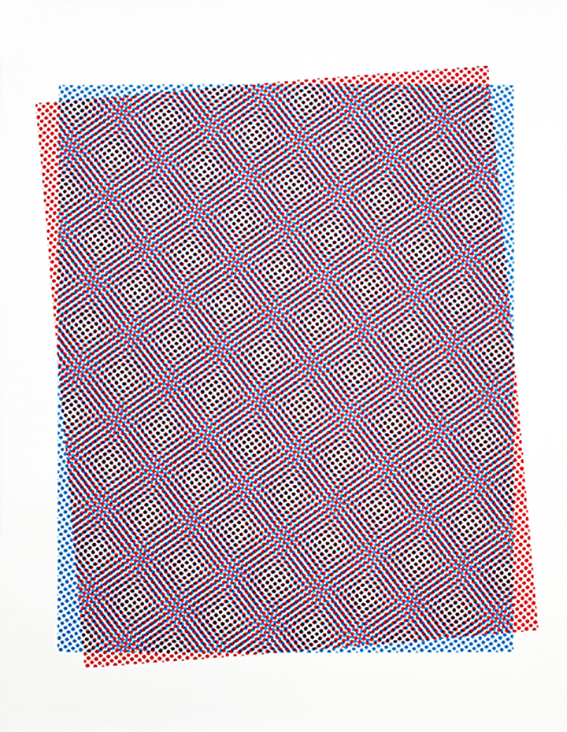 Unique, in a series of 20 variations, signed and numbered by the artist

This edition is published by S1 Artpsace

Produced on the occasion of the group exhibition The Parallax Curtain (with contributions by Emily Musgrave, Jessica Warboys and Melissa Gordon), Melissa Gordon’s limited edition Moiré (2012) is a series of twenty unique works, which collectively and playfully explore the effect of moiré patterns. Made up of two individual but identical layers, one blue and one red, the blue layer remains stationary whilst the red layer shifts by a varying degree of separation for each print. As the series progresses, the rotation at which the red layer is printed has shifted, so that edition one is printed at -10 on the axis and edition twenty is at +10. This variance in rotation means that each print appears different from the others and so creates a series of editions that are both facsimiles and unique works.

Melissa Gordon’s work is laden with the weight of history, an abundance of factual information and powerful media imagery reproduced to the point of exhaustion. Selecting iconic media images from significant moments in Western history, she collects and layers one image on top of the next in a gesture of simultaneous reproduction and erasure. In other works, Gordon focuses on the systems through which we receive information themselves, reducing text and image to pure pattern, denying communication, and leaving only the familiar dot-matrix and grid structures from the printed page.