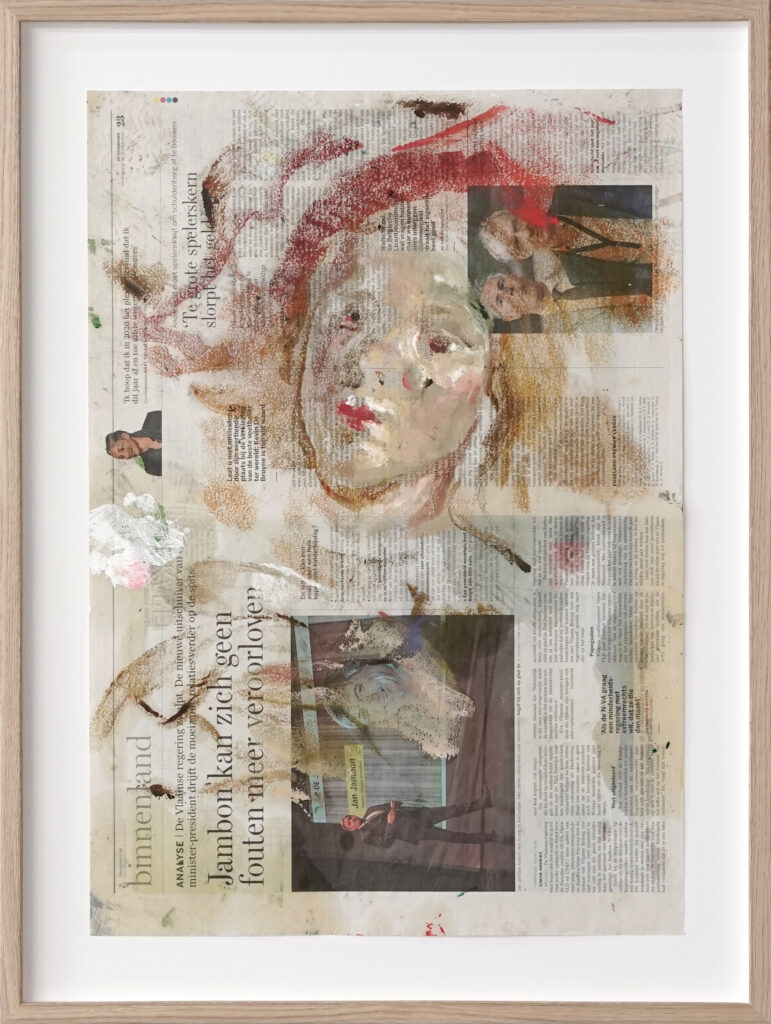 This painting is presented by Ludion

Matthieu Ronsse painted an entire room of the Raveel Museum in Machelen aan de Leie, in late 2019. His work embraced the entire space, door and fireplace included. After the exhibition, the work would disappear – in fact, that was a condition for participating. However, his murals made such an impression that the museum decided to keep them.

While painting the room in the Raveel Museum, Matthieu Ronsse made a series of monotypes by placing sheets of newspaper on the newly painted, wet walls and thus transferring part of the image to paper. In this way, he ensured that the work, originally ephemeral in nature, would still leave its mark. He used the newspaper of the day on which he made the prints, thus anchoring a series of images in time. He did this in 12 unique pieces (unique prints or monotypes). At a later stage, Ronsse applied further touches of paint to these prints and some of the sheets were even used by the artist to mix his paint. The result of this is a series of unique works, in which we recognize nods to Rembrandt, Cézanne, Velázquez and Lucian Freud.

The paintings and installations of Matthieu Ronsse are fragments of a painterly discourse where experiment and the joy of creating are central. As long as the artwork is in Ronsse’s hands, it remains subject to an ongoing creative process and is thus never perceived as ‘finished’. Even during his exhibitions, transformations are continuously possible. For Ronsse, it is not the final image that is the focal point, but rather the essence of his work lies in the creative process along the way. The painting is simultaneously his palette: it self-reflexively contains the traces of its own production while showing the chance occurrences Ronsse encourages to evince vigorous energy with his creative process. Fragments of work by old masters, depictions of the private sphere of the artist, and architecture and photography books are his recurring subjects. Together they form the fundamental ideas of his painterly imagination in which an accumulation of images and materials create these surprising possibilities and new avenues of exploration. Experiencing Ronsse’s work is beyond looking at an image: it is about the complete immersion in the creative process of the artist.

Other works by Matthieu Ronsse