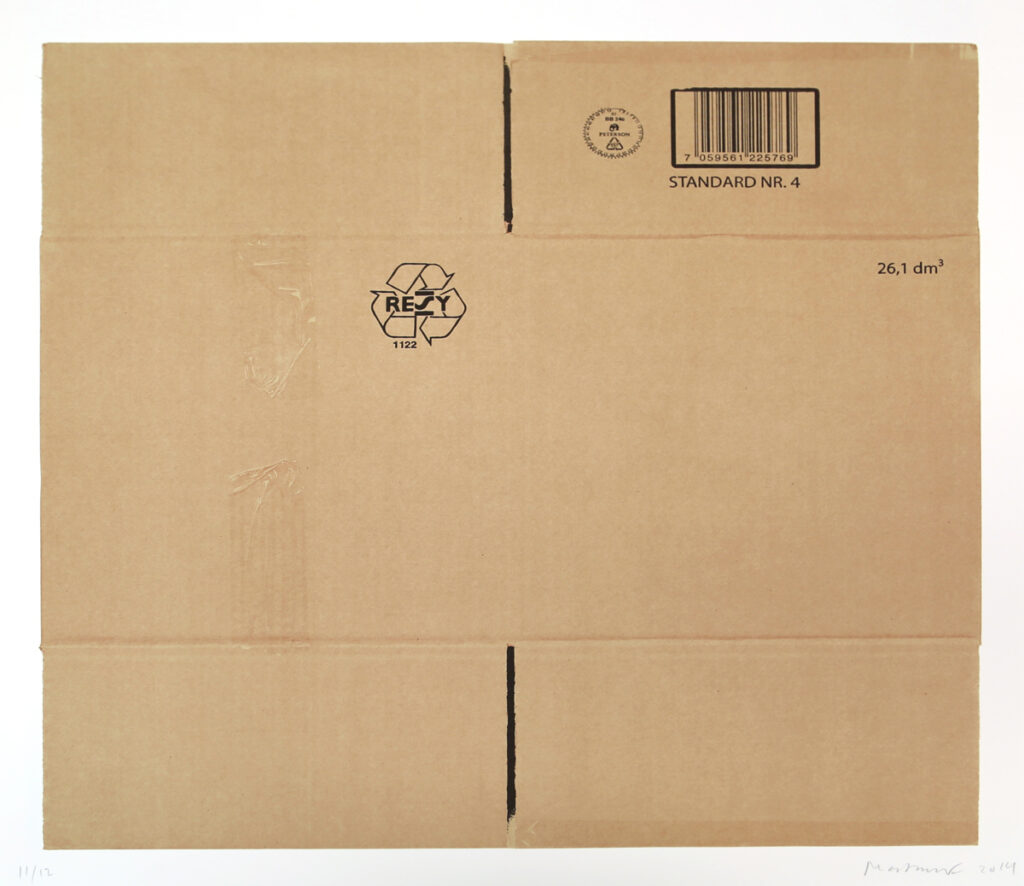 Matias Faldbakken’s Box lithographs come in three different formats and derive from a series of works he exhibited at Paula Cooper Gallery in New York in the spring of 2014. In this series, the artist interrogates the boundary between the precious, quasi-sacred quality of the art object and the disposable yet nostalgic nature of cardboard packing boxes. The works also speak to the ideas of circulation at play in Faldbakken’s “container works”—cans, jugs, lockers, sacks, bags, and other generic vessels for storage and transport that potentially contain goods of some sort.

These flattened packing boxes evolved out of an encounter with a Joseph Beuys work consisting of a framed olive oil box.

Norwegian artist and writer Matias Faldbakken’s practise centres around the collision, following a precise conceptual procedure with trivial gestures of vandalism, appropriation and poetry. Inspired by minimal and conceptual art of the 1960s and ’70s, with its deconstructive focus on the object and the gallery space, Faldbakken criticizes the ideology of the white cube space.

Faldbakken has an ongoing interest in transforming an existing language of forms related to a particular period in modernism and is renowned for his radical, provocative attacks on society and the art world. In thousands of ways, his work pronounces a resounding ‘no’: he destroys and provokes, but at the same time he recognises that he irrevocably belongs to the society to which he is saying ‘no’.

His practice holds in perpetual tension the forces of proposition and cancellation, vandalism and erasure, aesthetic generosity and conceptual restraint, the possibility of language and its abstraction into illegibility. In recent works, mass-produced containers are subjected to various manipulations and often rendered useless. The objects he adapts often veer between the iconic and the almost painfully generic.

Other works by Matias Faldbakken