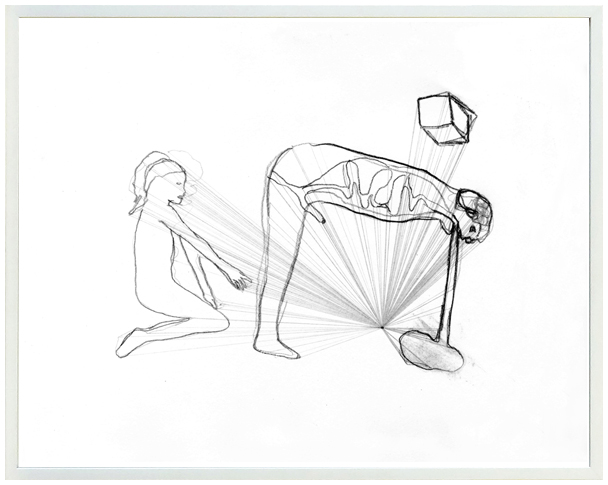 Offset print and pencil on paper

About this edition, Mark Manders says: “In the series Drawing with Vanishing Point, I trace a drawing back to its starting point. Drawing is a very physical action: you put a pencil on paper, move it, stop, draw another line… By tracking every movement in a drawing, a vanishing point appears. This vanishing point also functions as a projection point for the decisions that were made while creating this image.” The motive depicted on this edition was also part of Mark Manders’ most recent presentation in Belgium, as part of the installation he made for The Absent Museum in Wiels.

The basis of this edition is an offset print, on which Mark Manders drew with pencil.

Since 1986, Mark Manders has developed an on-going project, consisting of sculptures, installations and architectural plans, which he describes as a “Self-Portrait as a Building”. As the title suggests, his artistic practice seems an attempt to translate individual identity, such as personal emotions and ideas, into sculptural spaces through objects and text. Manders makes use of found objects, including brick walls, tables, chairs and raw wood, which often reoccur often throughout his oeuvre.

Other works by Mark Manders

A Few Things One Is Not Allowed to Do