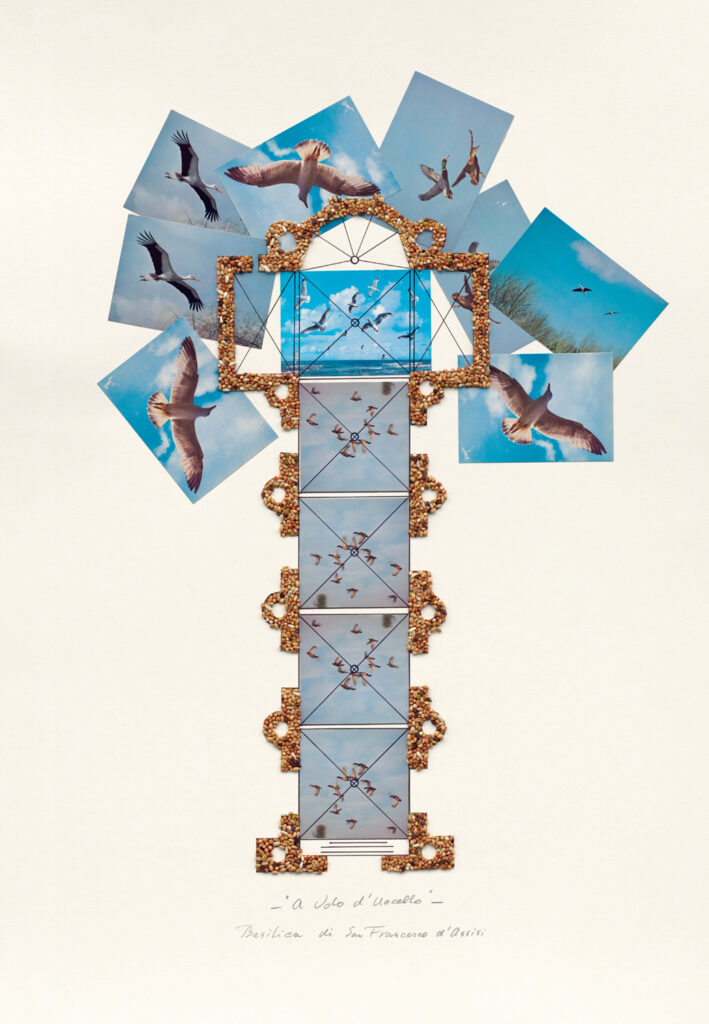 A Volo d’Uccello (A Bird’s-Eye View)

Edition of 80, signed and numbered by the artist in pencil

This edition by Marinus Boezem, A Volo d’Uccello (A Bird’s-Eye View), is part of a threefold project of the same name that took place in De Vleeshal in 2010. For this project, Marinus Boezem recreated the map of the Basilica of St. Francis of Assisi in birdseed on the roof of his studio. Via a webcam connection, the various stages of the process were broadcasted onto video screens in the exhibition space of De Vleeshal, where a second (indoor) map in birdseed was installed on its black-and-white tiles. Both maps eventually disappeared as hungry pigeons fed themselves with the meticulously installed map of seeds, only to evolve into a moss leftover on the artist’s roof, as a reminder of the project.

The edition is a ‘mental sketch’; an assembly of the different elements Marinus Boezem was inspired by when he created A Volo d’Uccello (A Bird’s-Eye View). In the edition, the Basilica of St. Francis of Assisi is again laid out in birdseed, accompanied by images of several birds. The bird images originate from a card game the artist bought in the 70s, during his visit to the coastal area Het Zwin in Belgium. Marinus Boezem’s fascination for St. Francis of Assisi – often depicted surrounded by birds – stems from attending a catholic school in the 1930s, where he used to read small books about the saint.

Marinus Boezem is known for his radical view of art and his works in public space. Together with Wim T. Schippers, Ger van Elk and Jan Dibbets, Boezem is seen as one of the main representatives of conceptual art and arte povera in the Netherlands in the late 1960s.

In 1960 Boezem exhibited part of a polder as a ready-made – this was his first conceptual work. Most of his works from the 1960s comprised only an idea or a proposal for an object. From the mid-1970s, Boezem began to work out his conceptual ideas in sculpture. In his sculptures, the role of the environment played an important role. Themes as air, light, sound and movement, which were the central themes in his early work, remained leading motives in his sculptures.

In the 1980s Boezem worked on several major projects in which the landscape plays an important role. His greatest and most important project in this period is The Green Cathedral (1978–1987). For this artwork, 174 Italian poplars have been planted in a polder landscape in Flevoland. The trees reproduce the floorplan of the Gothic Cathedral of Reims. Many of Boezem’s spatial works can be placed in the tradition of Land Art. Motifs such as landscapes, space, climate, light, air and cartography play a central role in Boezem’s work.