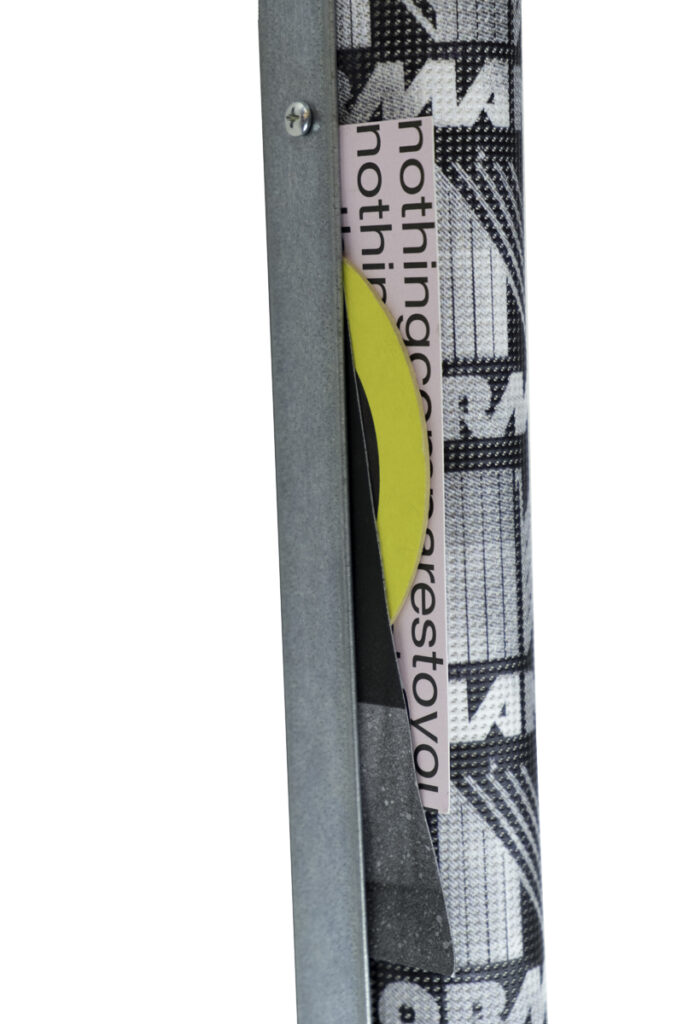 Unique wall sculpture in a series of 05 variations, signed by the artist

This new work is a part of E.H.D., a larger series in Grunewald’s practice which stands for “External Hard Drive”. This series refers to a physical, versatile archive that the artist is constructing, and that forms the basis for developing new work. The source material in this archive is constantly transformed – by enlargements, contract adjustments and other disruptions – through an old Xerox machine, resulting in large-scale abstract works.

Within this series, E.H.D. Manor Tube is a new sub-series that focuses on the artist’s famous logo-motive. For many years, Manor Grunewald has used graphics by the – now-defunct – French typographic company Mecanorma in his work. Some years ago, he adapted the Mecanorma logo, cutting it up to form ‘Manor’ as his own brand logo – used in endless repetition, similarly to the Versace or Dolce & GaBbana logos from the Nineties.

For this wall sculpture, a large scale UV print on mesh is rolled up in a metal profile – referring to both his freestanding metal sculptures as to the framing of his paintings. Between the tube and the profile, Grunewald placed invites to some of his earlier exhibitions, flyers for shows of friends and other miscellaneous objects from his studio.

Manor Grunewald creates large-format works on canvas and sculptures, which closely correspond with each other, addressing the artist’s experimental search for image content. In his recent works, Grunewald is concerned with the optics, visual conformity, imperfection and arbitrariness of the phenomenon of the black-and-white copy. On the canvases are superficially dark colour gradients, which, like the colours produced by a black-and-white photocopy machine, oscillate between shades of black, grey, violet and dark blue. The artist also transfers the “blackening”, distortion and layering of the photocopy process, which leads to colour stains, reflections, white edges and blurred objects, such as fragments of cartoon characters.

Other works by Manor Grunewald