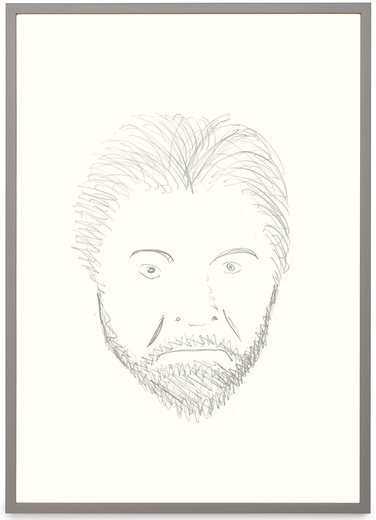 Pencil on cardboard in a painted frame

Unique drawing, in a series of 10 variations, signed and dated by the artists

The portrait Joachim Zeller – CDU politician (2014) by artist duo Jos de Gruyter & Harald Thys is stripped of all attributes, marks or signs of identity, yet it is reminiscent of mental patients or other troubled people. The drawing continues the artists’ exploration of dark psychological states.

The work of Belgian artist duo Jos de Gruyter and Harald Thys is rooted in a folksy, tragicomic sensibility honed into an experimental dramaturgy. Their video and photographic work use simple, symbolic sets, where inter-human tensions between a recurring cast of non-professional actors as well as invented or adopted personae are constructed and an outspoken depression becomes tangible. Defined by their characteristic ghoulish humour, the works of de Gruyter & Thys not only reflect on the major issues concerning social strata, but broaden the scope through an obsessive observation of their inner processes.

Their work have been shown in several group exhibitions at venues such as SculptureCenter, New York; ICA, London; and S.M.A.K., Ghent. They also participated at the 55th Biennale di Venezia in 2013.

Jos de Gruyter & Harald Thys are represented by the following galleries;
click through to discover more of their work.