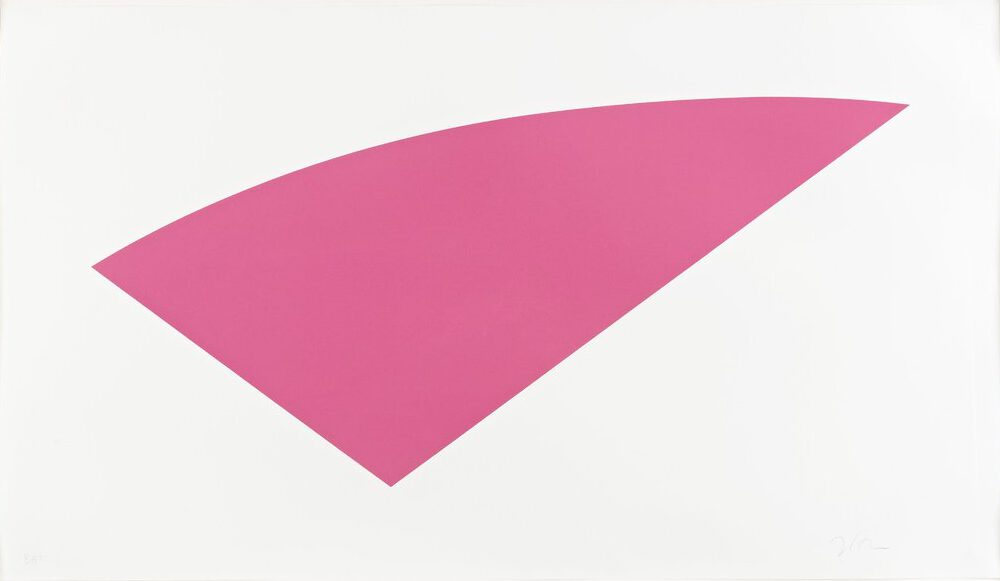 This edition is published by DCA

Produced in conjunction with the artist’s solo show Jonathan Horowitz: Minimalist Works from the Holocaust Museum at DCA, this print edition relates to Horowitz’s large scale fibreglass sculpture, which featured in the exhibition. Inspired by an Ellsworth Kelly white fibreglass sculpture in The Holocaust Museum in Washington, DC, the artist re-presents the original pure white form using an expanse of exuberant pink.

Curator Graham Domke says: “Horowitz’s translation takes the original out of the closet and turns it into something more triumphant. But of course the pink triangle also marked out homosexuals in Nazi Germany so brings the issue of that minority in that holocaust to the fore.”

In print form, this work is also a reference to Ellsworth Kelly’s much sought after limited editions (produced at Gemini G.E.L) and are created using the same original lithographic technique used by Kelly.

Jonathan Horowitz works in video, sculpture, sound installation, painting and photography and is known for making work that critically examines some of the most controversial social and political issues of the day, including race, sexuality, celebrity, religion and consumerism.

Born into the last generation to truly straddle both the analogue and digital eras, Horowitz regularly works with found footage and images, juxtaposing elements from film, television, advertising and the media to reveal connections and breakdowns between pre- and post-digital society and the overlapping modes of communication common to both. The themes of obsolescence and technology are also recurrent in his work.

Often combining the imagery and insouciance of Pop Art with the critical rigour of Conceptualism, Horowitz’s work is frequently provocative and subversive, but rarely lacks poignancy and humour. Horowitz, who originally studied philosophy and film-making, is highly regarded for his acerbic and radical questioning of the value systems inherent within advertising, politics and the media to reveal larger, more uncomfortable truths about contemporary society.

Jonathan Horowitz is represented by the following galleries;
click through to discover more of his work.

You can also discover more of Jonathan Horowitz on his own website.