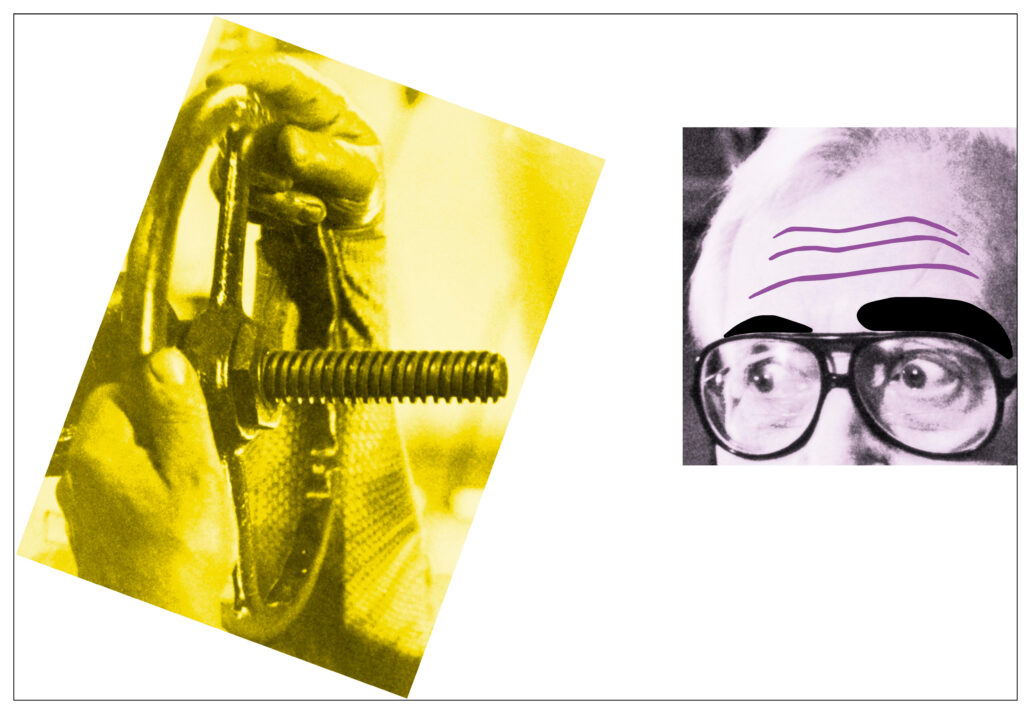 Edition of 150 copies, signed and numbered by the artist on certificate

The edition is part of a larger series of works titled Raised Eyebrows/ Furrowed Foreheads. This series is the direct continuation of the previous series in which the artist associated fragmented body parts with coloured planes, three-dimensional forms, and language. Under the titles Noses & Ears, Etc, Arms and Legs (Specif. Elbows and Knees), Etc, and Prima Facie, Etc, these series dealt with the specific issues that have constantly been featured in his work: the relationship between the separate parts and the whole – what to leave out and what to leave in – and the introduction of a hybrid visual language that strives to multiply interpretations through changes, cuts, omissions and shifts of meaning.

The fragmented depiction of body parts are stills from the film archives collected and recycled by the artist, reframed in close-up, breaking off any connection with the context of the scene. In Raised Eyebrows / Furrowed Foreheads the artist refers with a considerable degree of humour to the uncertain interpretation – at once surprise or dismay, anger or scepticism – and seems to tell us: “Aren’t we all worried? – These works may well be a description of this condition”.

John Baldessari has been an innovative force in contemporary art redefining its parameters to include its role as a visual evocation of language, and leading the way in bringing photography to the forefront of contemporary art. Over five decades of conceptual practice he has embraced painting, photography, film, video, books, prints, objects and installation.

His use of appropriation, alteration, and montage to disrupt a narrative or to construct an entirely new meaning out of recombined fragments has been utilized in disparate ways in different bodies of works spanning his career, from early text paintings, to conceptual works and found pictures; from erased identity works of the 1980s and 90s to more recent series in the past five years in which he investigates new issues of painting.