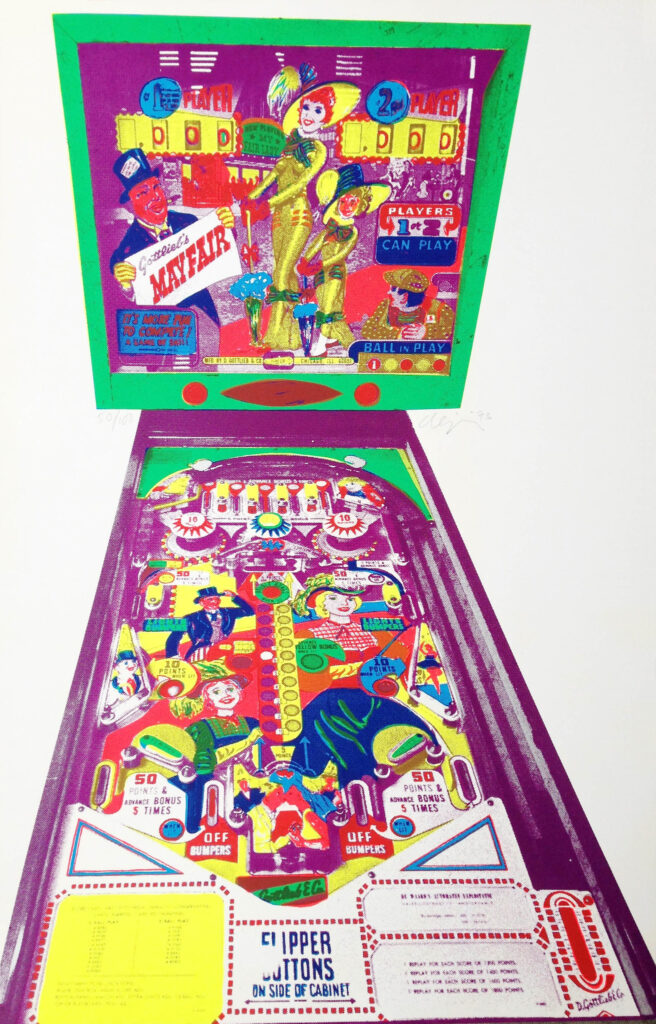 The Situationist Times was a magazine edited and published by Jacqueline de Jong, of which six issues were published during the years 1962–67. Using Situationist tactics as détournement and a printed form of dérive, the journal included essays, artwork, found images, and quotations concerned with such issues as topology, politics, and spectacle culture. You can see all six issues of The Situationist Times here – including profound commentary by Jacqueline de Jong on every single issue.

The intended 7th issue of The Situationist Times was devoted to the game of pinball. It was never published but inspired Jacqueline de Jong to make several works around pinballs, including this edition from 1973.

Jacqueline de Jong is widely known for her contribution to the European avant-garde of the 1960s. Throughout a career spanning six decades her work has explored the violence, banality, eroticism and humour of human interaction. Painting is the foundation of her practice, which also encompasses drawing, sculpture, printmaking, jewellery and artist books.

Forced to flee Holland during the war, de Jong’s early life was marked by social upheaval. She became involved with the radical artists and thinkers of the 1960s, most notably with the Situationist International and Gruppe SPUR. When de Jong was excluded from the Situationist International, along with the other visual artists, she founded The Situationist Times. Hailed as one of the most important and experimental journals of its time, the publication offered an opportunity for collaboration between writers, poets and visual artists. As editor and publisher she produced six issues between 1962 and 1967. In 1968 she marched with the students in Paris, printing artist posters in support of the movement.

The artist’s painting practice is diverse: declining to progress in a linear fashion, she often doubles back and revisits formal and conceptual concerns. Early works from the 1960s include expressive abstraction, the violent and humorous Accidental Paintings and Suicidal Paintings series, and the witty and erotic Private Lives of the Cosmonauts. Themes of sexual desire, war and violence continue throughout, with the Série Noire of the 1980s, the Paysages Dramatiques and paintings of the 1990s that address war more explicitly. The artist’s most recent work takes inspiration from the monstrous shapes of overgrown potatoes, exploring further the humorous and grotesque side of nature.