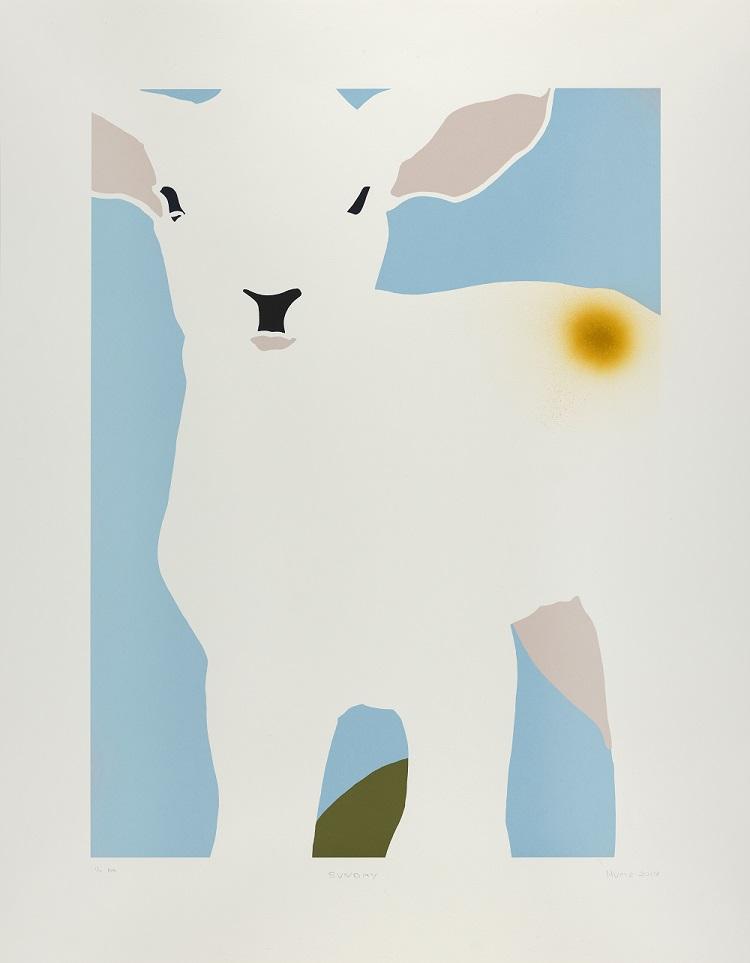 Edition of 35 copies, signed and numbered by the artist

This edition is based on the painting of the same name, which Hume produced as part of Mum, his 2017 solo show at Sprüth Magers, London. Taking the image of the lamb as the central point, the edition is a meditation on innocence and spirituality, placing these qualities in dialogue with the violence of human existence. The coalescence, intersection and interstices of these areas is reinforced further by the title Sunday, connotes the Christian day of rest, as well as the banal ways in which we utilise that day in domestic life, for instance with the Sunday roast.

Produced as a four-colour silkscreen, each edition has been hand-finished by Hume, who has spray-painted the marker on the lamb’s rump. Sunday is immediately recognisable as coming from Hume’s stable, through the stylised form of the lamb and the way in which its figure both emerges from and merges with the paper on which it is printed.

Gary Hume Part was part of the notorious and internationally celebrated group of Young British Artists that studied at London’s Goldsmiths College in the late 1980s, and came to prominence in the early 1990s.

Hume first received critical acclaim in the early 1990s with his bold, large-scale paintings which used high gloss paint to create planes of industrial colour. These were initially seen in the near-legendary 1988 Freeze exhibition organised by Hume’s fellow student Damien Hirst. An early focus on institutional doors evolved over subsequent decades to encompass a range of subjects: figures such as mothers and babies, friends and celebrities from Tony Blackburn to Kate Moss as well as images drawn from nature or childhood including flowers, birds and snowmen. Through this surprisingly varied set of motifs, Hume explores the full spectrum of emotional response from wonder and joy to melancholy and loss. Conventional ideas of beauty are frequently countered by a darker, more questioning sense of the world and recognisable forms are sometimes fragmented to near abstraction.

Gary Hume represented Britain at the Venice Biennale in 1999 and the São Paulo Biennial in 1996, the same year he was nominated for the Turner Prize. In 2001, he was elected to the Royal Academy of Arts, London.

Gary Hume is represented by the following galleries;
click through to discover more of his work.