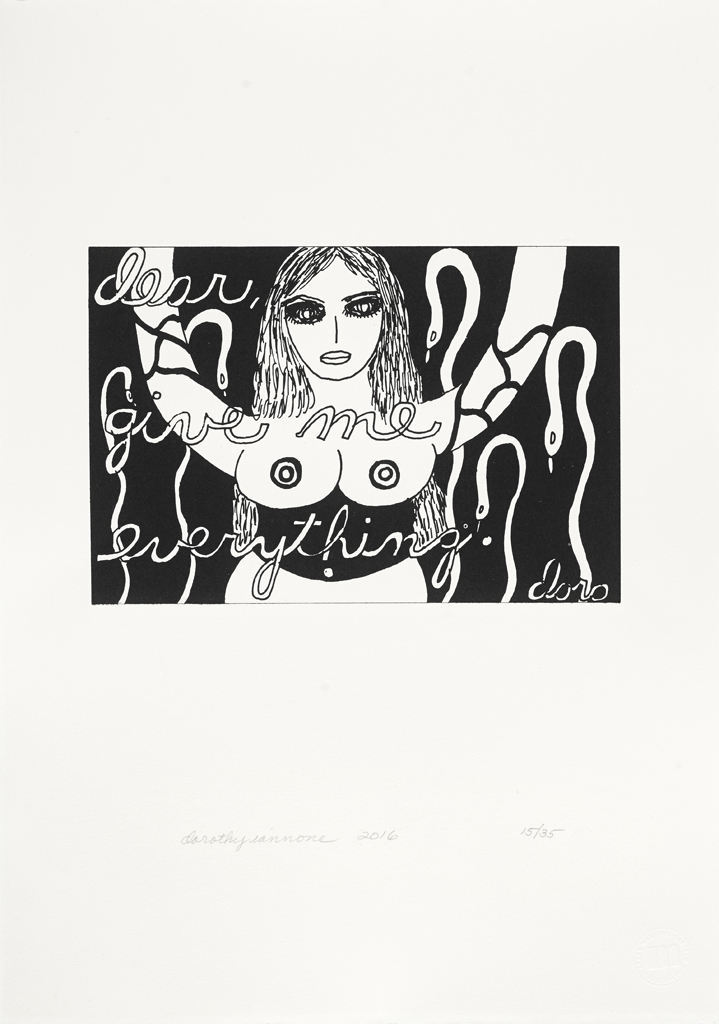 Dear, Give Me Everything

Edition of 35 copies, signed and numbered by the artist on the recto side

In 1976, Dorothy Iannone made three drawings to be published as postcards editions by a publisher in the South of France. This edition revisits one of these drawings as a full size copper print.

Dorothy Iannone is a self-taught artist focusing on issues of emancipation, sexuality, politics and spiritual awakening. She has been developing a singular body of work for over half a century. From 1967 she lived with Swiss-German artist Dieter Roth for a number of years, starting a thorough intertwining of her personal (and amorous) life with her artistic work. This emphatic autobiographical and narrative aspect of her work is expressed in paintings, drawings, graphic novels, sculptures, artist’s books, text-based works, collages and photographic works.

In the 1960s, Iannone produced abstract expressionist works, yet from the 1970s onwards, she has developed in a more figurative direction with herself, her partner, and what she calls ‘ecstatic unity’ as central subjects. Iannone’s body, depicted as an ornately bejewelled divine Matriarch, becomes entangled with that of her Muse, the Swiss-German artist Dieter Roth. Black lines and colour fields define overwhelming mosaics and two-dimensional tableaus of copulating couples whose male and female parts become interchangeable in the higher union of spiritual oneness. Confident women break free of all restraint and figure in a tale of love, sex, treason and power. The sexual act is emphasized and celebrated, much as it was in Antiquity.

Other works by Dorothy Iannone