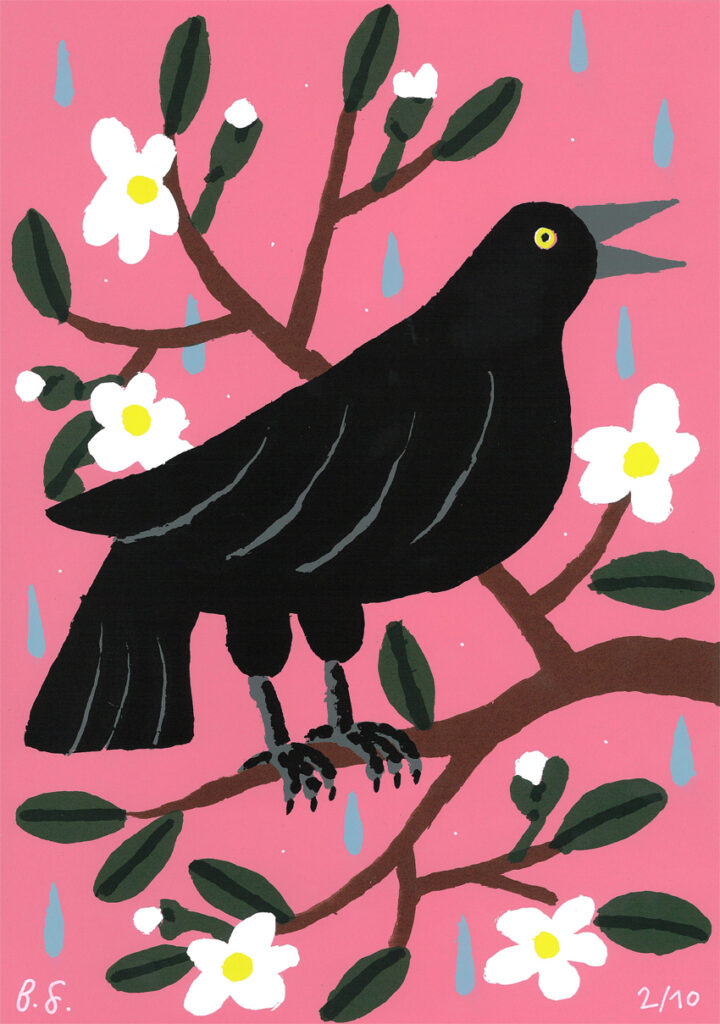 Nature plays a central role in Ben Sledsens’ work. More often than not, trees and plants form the backdrop for human or animal portraits. The bird is an important returning motive in these works. In the painterly tradition different types of birds symbolised different things, but generally speaking, birds are synonymous with flight, and as such is a potent symbol and embodiment of many of humanity’s hopes and dreams. Linking of earth and sky, they connote both the human and the divine spirit.

Ben Sledsens made this nine-colour silkscreen print to accompany his first monographic publication. Sledsens handpainted each colour directly on a film, and added some final handpainted details on every finished print.

In his paintings, Ben Sledsens transforms daily life, literary characters, animal portraits and elements of (art)history into his own private utopia. His works often hide subtle links to each other and compositions recur also between paintings and drawings, which only amplifies the works’ underlying ambiguous significance while he creates a bigger fictitious world together.

Central to the work of Sledsens is his profound understanding of painterly tradition. His palette of strong, vivid colours, high technical qualities and naïve perspective exist in a long tradition of painting that reference Henri Matisse, Henri Rousseau, and Pieter Bruegel the Elder, yet his works are part of a bigger poetic universe that is all his own. Sledsens invites us to consider the thoughts of the people, places and events that populate his vivid scenarios, whether they exist in private or public realms, in personal or shared experiences. His tempting contexts seduce by intertwining multiple narratives in a single work, making the viewing that much more entranced and involved. Sledsens translates his personal subject matter into poetic or romantic images, with an open beginning and ending, meant for interpretation by the spectator.