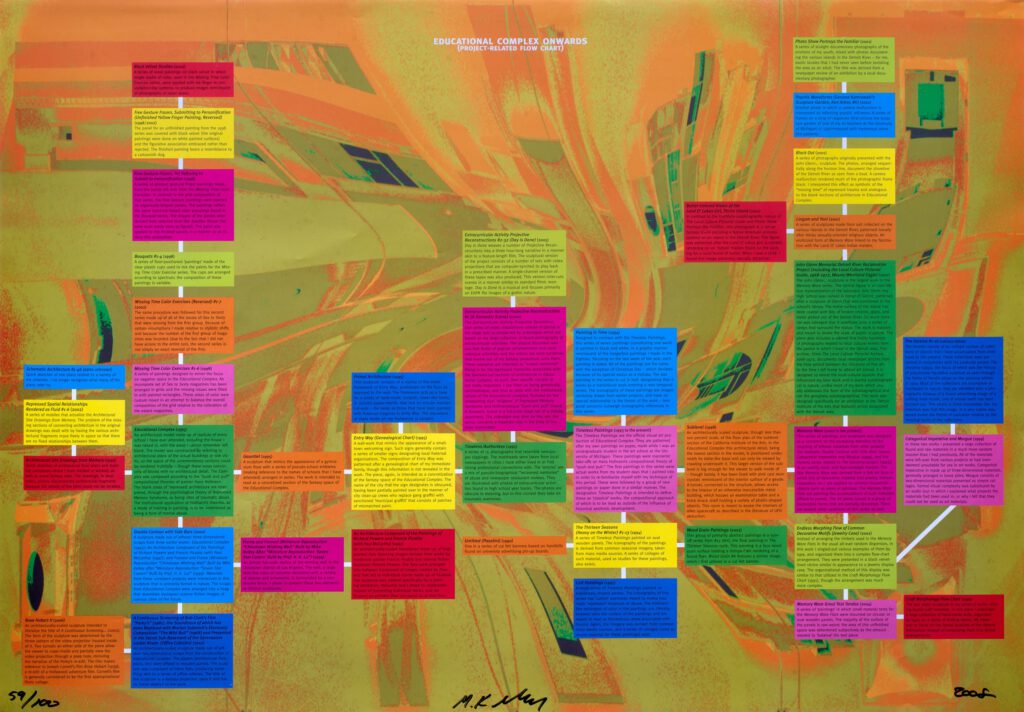 This edition is published by Wiels

Educational Complex Onwards (2008) refers to an on-going project since 1995 Mike Kelley called Educational Complex; which is a model of the school he attended and the house where he grew up. As visualised iin this printed flowchart, the blind spots of the model represent forgotten zones and are interpreted as symbolic places of institutional abuse.

Educational Complex Onwards was published on the occasion of the eponymous solo exhibition by Mike Kelley at WIELS in Brussels in 2008.

Mike Kelley is considered one of the most significant artists of the last 30 years and has worked together with numerous artists, such as Paul McCarthy, Jim Shaw and Tony Oursler. Kelley’s artistic practice is extremely diverse in medium and includes performances, installations, drawings, and sculptures (made of multiple materials and non-art objects, including stuffed animals).

His work is characterised by the way it integrates popular culture (nourished by philosophy, literature and art history) and by the exuberance of his visual style which is opposed to aesthetics of minimalism as well as to the neutrality of pop art and abstraction. In this way Kelley challenges traditional attitudes towards topics such as religion, sexuality, gender, education and even art history. It is this constant challenge and variety of influences that makes Kelley’s works -sometimes subtly, uncannily or even bluntly- so intriguing and powerful.

The Mike Kelley Foundation for the Arts is represented by the following gallery;
click through to disocver more of his work.

You can also find more works by Mike Kelley on his own website.