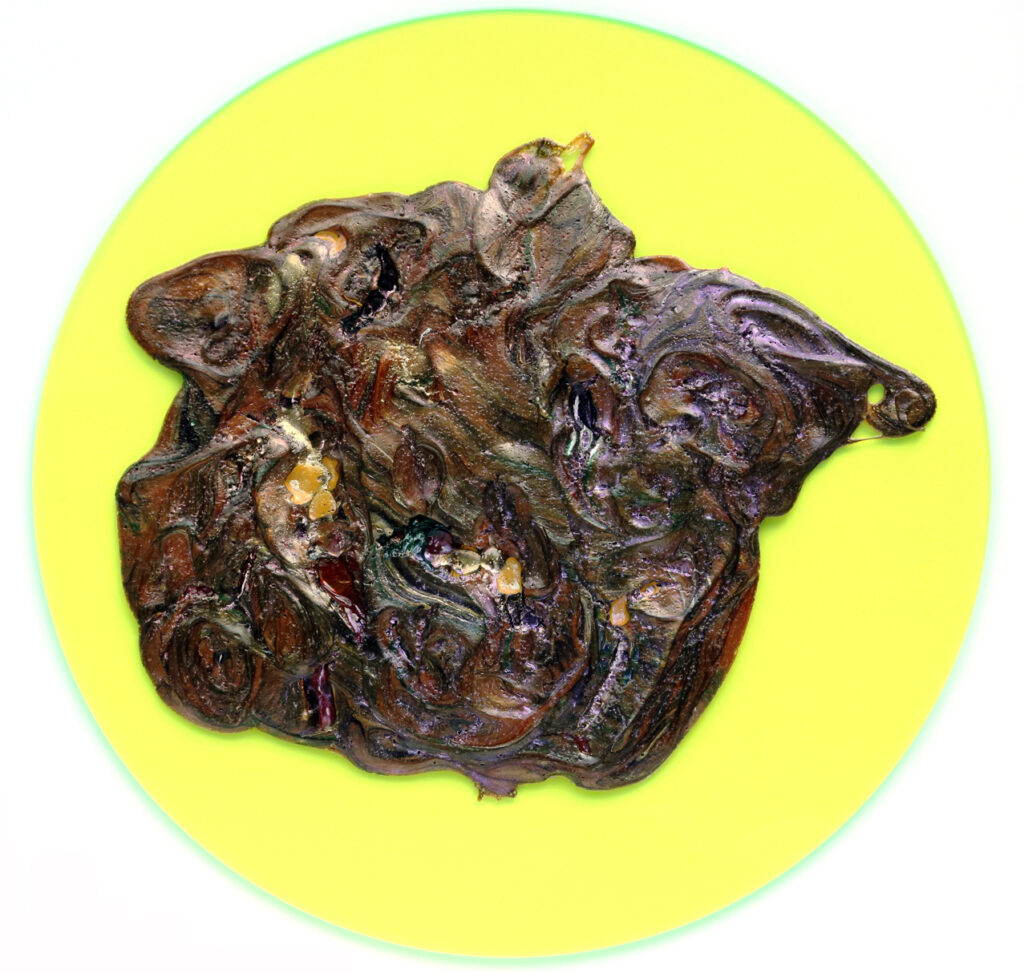 Unique, in a series of 21 variations, signed by the artist

This edition is published by Parasol Unit

Poison Evidence (2014) is an acrylic glass plate with a mixture of acrylic color, glue and gel – typically discarded elements in an artists’ studio. It reminds of a painter’s palette, but due to the clean glass surface simultaneously transforms into something completely different. This series of works was published by Parasol Unit on the occasion of the solo exhibition Traces and Shiny Evidence by Jimmie Durham in 2014.

Jimmie Durham is an artist, poet and prominent writer. His eclectic artistic practice spans five decades and is sustained by an investigative and remarkably creative mind. Primarily comprised of sculpture and installation, it also includes drawing, photography, performance and video. Many of his works are collages or collections of discarded objects and fragments of organic matter, the nature of which he intelligently and astutely transforms and often paints in dazzling colours. His work commonly refers to the attributes of mankind and animals, their life and past history.

Jimmie Durham has had numerous solo exhibitions, including shows at Serpentine Gallery, London; M HKA, Antwerp; Portikus, Frankfurt am Main; and Kunstverein, Munich. His work has been included in major group exhibitions at institutions such as the MIT List Visual Arts Center, Massachusetts; Centre Georges Pompidou, Paris; Haus der Kulturen der Welt, Berlin; and S.M.A.K, Ghent. Durham has also participated in a number of biennials, including the 55th, 51st, 50th, 49th and 48th Biennale di Venezia (in 2012, 2005, 2003, 2001 and 1999); the 29th Biennial de São Paulo, São Paulo in 2010; the 8th Taipei Biennial in 2012, Taipei; and the Sydney Biennial, Sydney Australia in 2004.

Jimmie Durham is represented by the following galleries;
click through to discover more of his work.

Other works by Jimmie Durham