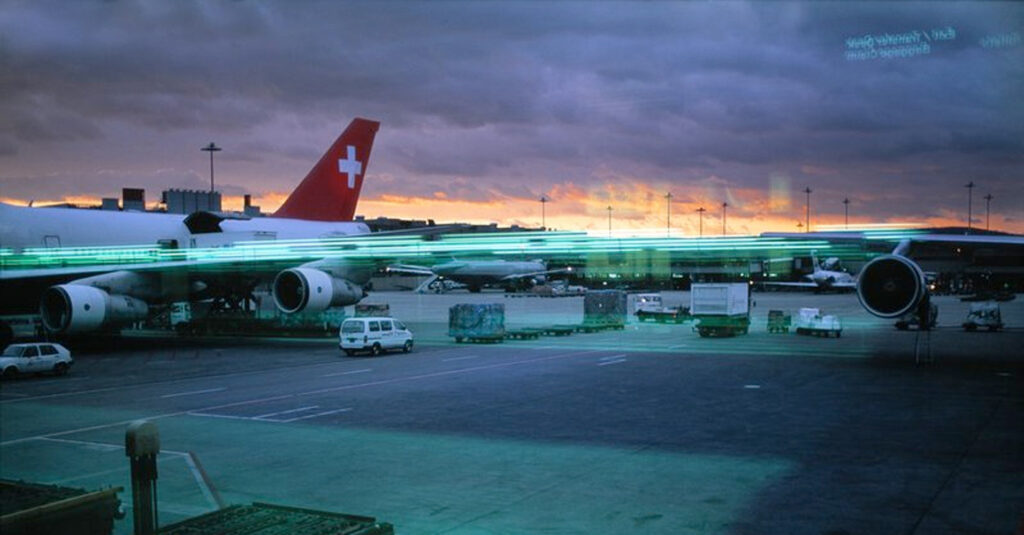 Edition of 100 copies, signed and numbered by the artists

Peter Fischli and David Weiss have created a special edition with a motif from their famous Airport-Serie (1987–2006). In contrast to the original small-scaled photographs, the artist duo transferred the motif into an unusual big format. Therefore, the illusion will be created that the beholder looks actually out of the windows of the Zurich airport watching airplanes arrive and depart. The reflection of the destination board lets the ordinary scene appear literally in a new light. This illusion of looking through a window is further enhanced by the reflective qualities of the framing in alubond.

This is Peter Fischli and David Weiss’ famous 2007 edition for Texte Zur Kunst.

The artist duo Peter Fischli and David Weiss has been working together since 1979. Their practice revolves around visual clichés, scenes from ordinary life and everyday objects, such as kitchen appliances or foodstuff. Humor is a given in their work. Their best-known work is the film Der Lauf der Dinge (1987), a 30-minute chain reaction of objects flying through the room, crashing together and exploding over a studio.

Solo exhibitions by Fishli and Weiss were held at the Guggenheim, New York; Tate Modern in Londen; the Serpentine Gallery, London; the Art Institute of Chicago; the Walker Art Center in Minneapolis; the San Francisco Museum of Modern Art and the Museum of Contemporary Art, Los Angeles.

The pair exhibited in some of the most important institutions and museums worldwide including Serpentine Galleries, London; Musée d’art moderne et contemporain Geneva; Centre Pompidou, Metz; Museu d’Art Contemporani de Barcelona; Museum Boijmans Van Beuningen in Rotterdam; Museo Tamayo Arte Contemporáneo in Mexico City and the Rencontres d’Arles festival, France. Fishli and Weiss participated in Documenta 8 in 1987. In 1995, Fishli and Weiss represented Switzerland at the Venice Biennale. In 1997, they participated in Skulptur Projekte Münster. In that same year, they partook in Documenta X. In 2003, they were included in the Utopia Station exhibition of the Venice Biennale curated by Rirkrit Tiravanija for which they won the leone’ d’oro for best work.

The artist duo Fishli & Weiss is represented by the following galleries;
click through to discover more of their work