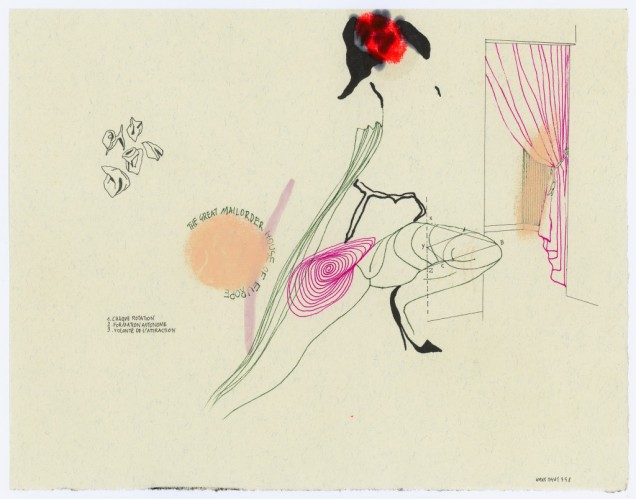 This edition is published by Wiels

Over the past thirty years, the psycho-diagnostic drawings of Anne-Mie Van Kerckhoven have formed the basis of an ambitious project exploring the relationship between gender, technology and representation.

XYZ (2009) was published on the occasion of her solo exhibition Nothing More Natural at WIELS, Brussels in 2008, which proposesd to revaluate the corpus of works in relation to her career and art, and places it in the perspective of the surrealist heritage, underground and comic books.

Music plays an important role in Van Kerckhkoven’s creative production in parallel to her visual output, and she and her husband Danny Devos have stood as a key pair of the Antwerp experimental music scene under the band name Club Moral (1981–now).

To contemplate the entire work of AMVK is to enter an idiosyncratic world, littered with fragments and sketchy representations from the arts, is to be confronted with abstractions, clusters of ideas and quotations ranging from occult philosophies to advanced sciences and technological concepts.

An extremely ambitious project is taking shape, one that is not satisfied with a sensitive, aesthetic representation of the world, but has set itself the task of confronting the limits of the logical and the transparent of the rational with the obscure, its unthinkable, normative opposite. A dialectic project, therefore, that cannot easily be described or organised. As dense and multiform as her techniques and performances are and as challenging as the ideas and concepts she incorporates into them, an acquaintance with her work is more like a journey through an oeuvre, which in itself is an adventurous trip through the fields of interest and focal points that have marked the counterculture over the past forty years.