What to see during Amsterdam Art Weekend 2017?

This year marks the sixth edition of the Amsterdam Art Weekend. Once more, we have the opportunity to attend a huge variety of openings, debates and activities across the entire city of Amsterdam. It’s not easy to navigate through this four-day jam-packed program with more than 100 events at over 50 different locations, so we made a selection of ten things you shouldn’t miss. 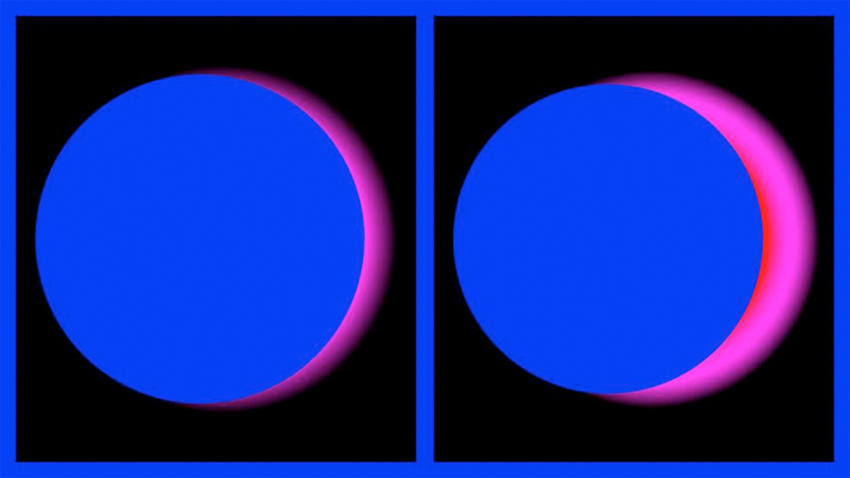 Every year at the end of November, the Rijksakademie residents open the doors to their studio’s and present their work to the public. This year 45 artists from across the world show the results of a year’s research, experiment and innovation. For us, this is the main event of Amsterdam Art Weekend – as the quality of the presentations is always extremely high. This years we’re especially looking forward to the studios and work of Basir Mahmood, Kate Cooper, Isabelle Andriessen, Sonia Kacem and Xinyi Cheng – just to name a few. Be sure to also see Nora Turato’s Leaning is the new sitting – this performance is on 4 times a day. For exact hours look here. 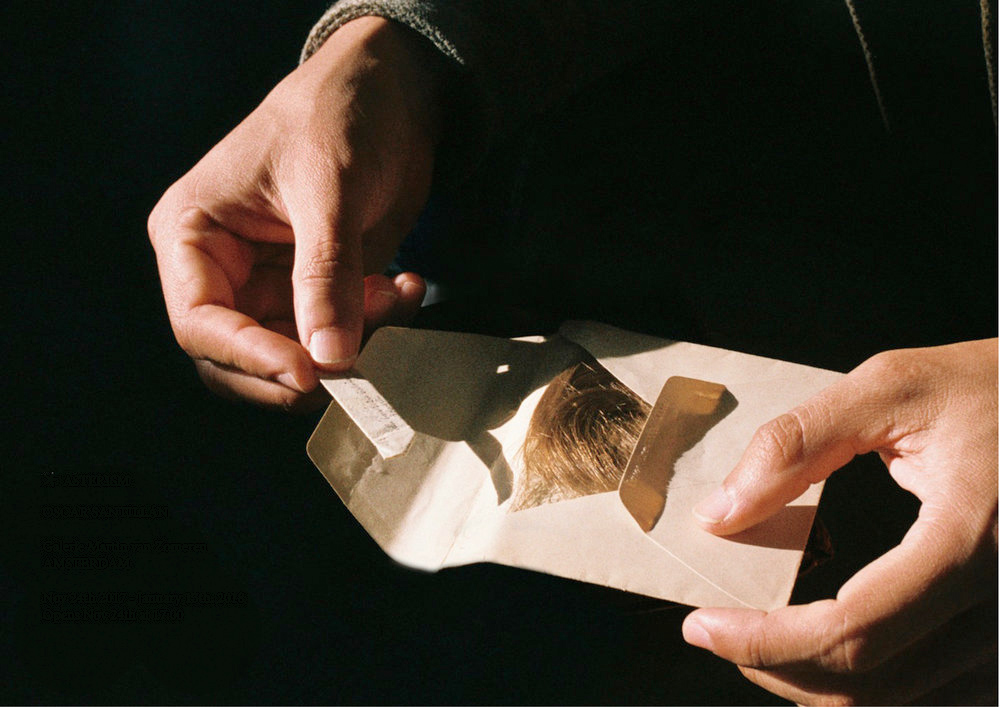 The work of Oscar Santillán quietly unveils uncharted aspects of reality and history. His practice seeks to go beyond the boundaries of Western reality, which, according to Santillán, is based on binary contraries—good/bad, black/white, man/woman, truth/lies. These categories dissolve in his work, opening up a larger sense of what is possible. He offers us physical evidence of a territory beyond reality, where a phantom limb is captured, the weight of light over planet Earth is measured, and the dance of a dead philosopher is brought back to life.

On 25 November at 15h, the new project space Rozenstraat organises a talk between Grace Schwindt and Museum M director Eva Wittocx, where they’ll discuss the role of film and performance within the gallery context, and the history of sculpture from the perspective of performance. This talk functions as a prelude to Schwindt’s solo show at the then newly renovated Rozenstraat in the spring of 2018. The talk is concluded with a screening of Schwindt’s 2014 film Only a Free Individual Can Create a Free Society. Inspired by the artist’s experiences and encounters growing up in a leftist environment in 1980s and 90s Germany, the film examines the notion of freedom: how it was, and is, understood; and who, if anyone, can really access it.

Please note that this talk & screening don’t take place in the regular Rozenstraat location, but at Smoke and Mirrors instead. 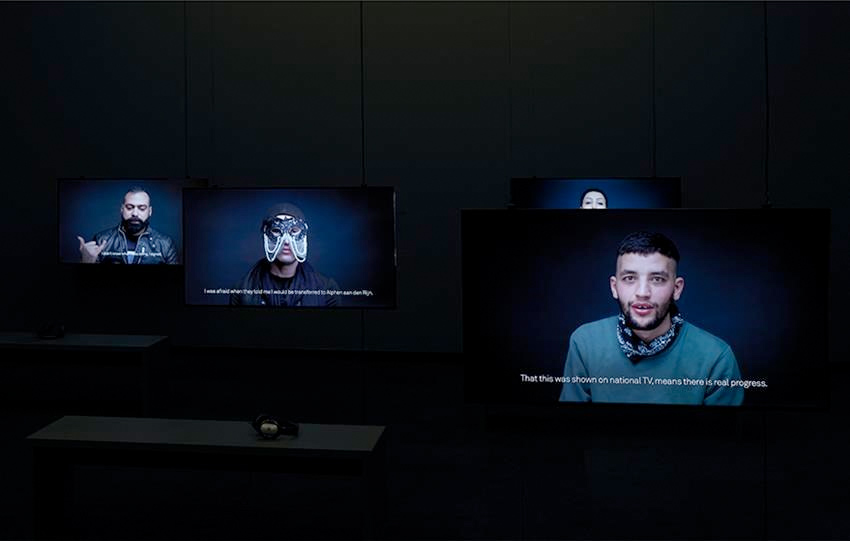 An obvious stop. There are two things which you really shouldn’t miss here. First of all you need to see a new commission of the Stedelijk Museum: The Crossing by Carlos Motta – presenting video portraits of eleven LGBTQI refugees who speak about their experiences before, during and after the exodus from their homelands to the Netherlands. Secondly, pay a visit to the exhibition Jump into the Future – Art from the 90’s and 2000’s. This recent donation of German collector Thomas Borgmann shows an extensive number of contemporary art works from the 90’s and the beginning of the 21st century – including work by Cosima von Bonin, Isa Genzken, Michael Krebber, Lucy McKenzie, Matt Mullican, Paulina Olowska, Wolfgang Tillmans, and Heimo Zobernig. 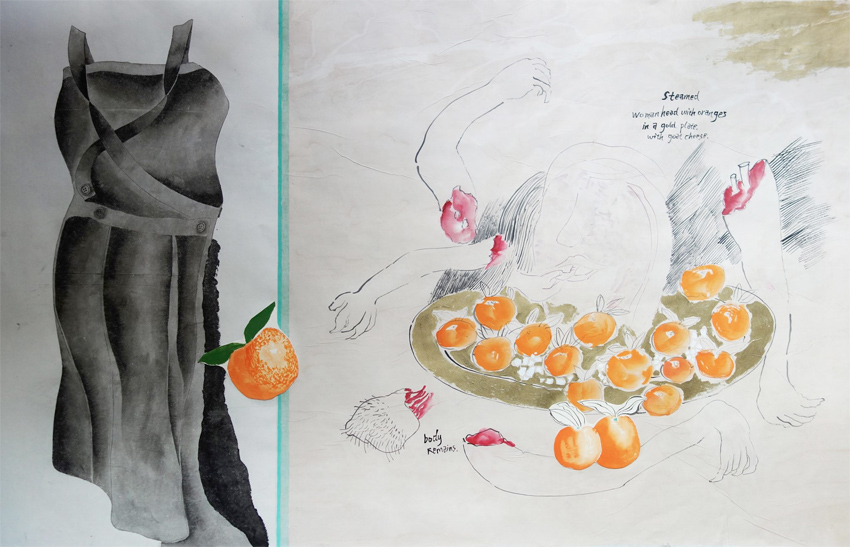 Evelyn Taocheng Wang’s exhibition title Four season of women tragedy refers to the phases which are characteristic to womanhood, according to Wang’s fantasies. The stable cycle of the four seasons becomes a metaphor for female life, in which small moments of tragedy occur. For Wang, tragedy cannot only be found in the great sensational and antique connotation of the notion, but rather in small, personal moments. The starting point of the exhibition is Wang’s own wardrobe, and specifically garments by the fashion brand Agnès B.  – for Wang the ultimate example of the European sophisticated woman, as seen from the perspective of the Asian woman. The clothes are not too gaudy or pretentious, but rather neutral as they play with femininity’s and masculinity’s role of dress codes. Wang explores the idea that you can create an identity with clothes, which provides you with a comfortability that allows for the freedom to be free with yourself.

On Friday 25 November at 16h the artist will give a special guided tour of the exhibition. 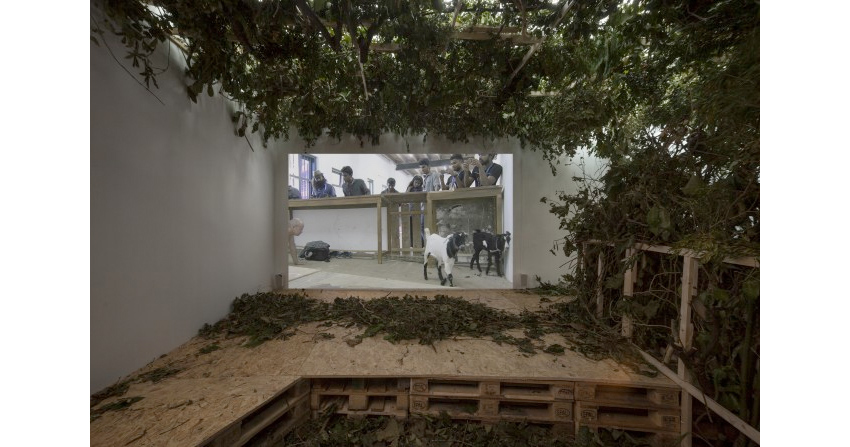 Annet Gelink Gallery presents its second solo exhibition of work by Erik van Lieshout. In his multimedia installations, Van Lieshout raises contemporary social and political themes such as multiculturalism, the position of minorities, and the consumer society. He approaches these from a personal view by making himself the subject. This show features Van Lieshout’s new film, made during his four month stay at the Kochi Muziri Biennale in southern India. The film is presented within a site-specific installation, and accompanied by a series of collages Van Lieshout was working on during his stay in India. The situation got out of hand when authorities removed them without the artist’s consent because they consider the collages blasphemy for their depiction of gods. Most of the collages showcased in the exhibition thus weren’t in fact presented at the venue of their creation.
Annet Gelink Gallery 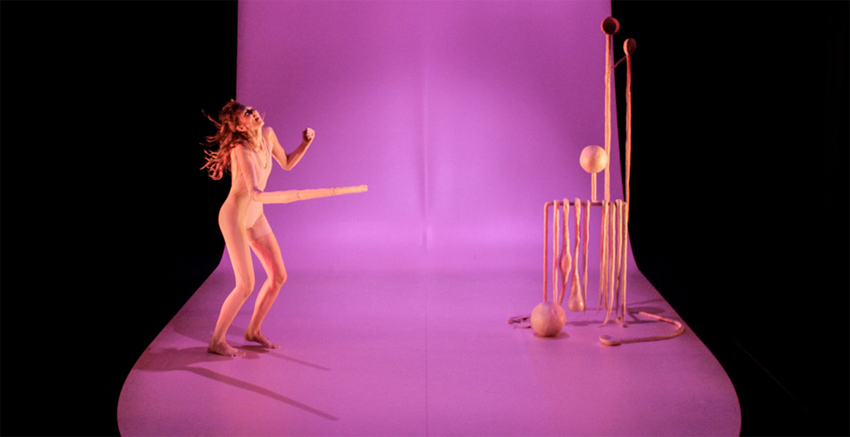 If I Can’t Dance, I Don’t Want To Be Part Of Your Revolution and Veem House for Performance proudly present the Dutch premiere of the solo piece Tongue PhD by New York based artist Ieva Misevičiūtė, taking place on 22 November at 17h30.

Across one hour, Ieva Misevičiūtė, Master in Political Science, Master in Cultural Analysis, finally gets a PhD granted by her tongue. The tongue bares the memory of the animal, the instinctual, but also is the main tool with which we express our humanness. It is a bridge between madness and intelligence. It’s a perfect place to get your PhD at! The piece consists of ten chapters each investigating a different metaphoric lens of the tongue. Tongue PhD fuses elements of physical theater, academic reverie, dance, and bawdy slapstick. A pink set with no straight lines transports the audience to this potent cavity where theory and rhythmic, animalistic loops mingle on equal footing. 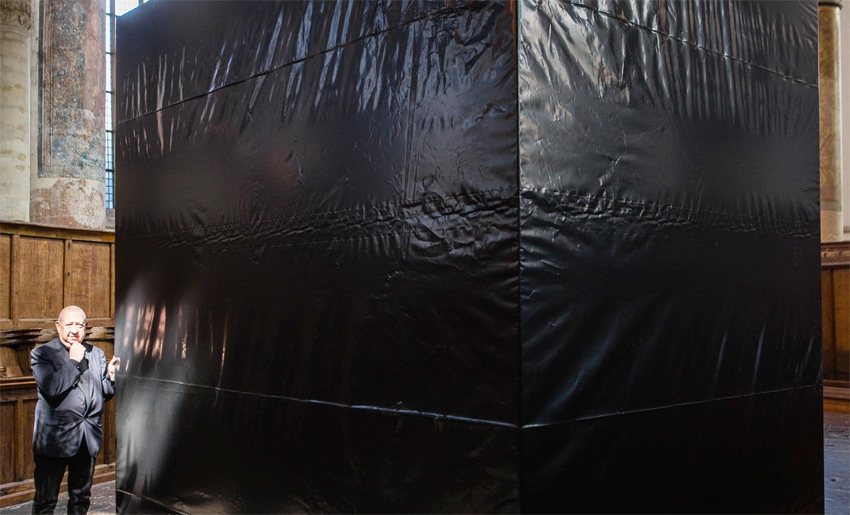 Oude Kerk shows a special commissioned site-specific installation by Christian Boltanski, as always .dealing with the way we remember and commemorate. In a memory- filled space like the Oude Kerk, with its eight centuries of history and 2,200 memo rial stones, his work is more than relevant. The monumental installations deal with what will come after our life has come to an end. On the gravestone floor, the artist designed a labyrinth of tombs suspended above the graves, creating new perspectives and an architectural layer that emphasizes our predecessors. As a visitor, you can even contribute to the exhibition. In a contemporary confessional chair you can whisper a number of names of people buried in the Oude Kerk. A recording of the whispers will be played during the following weeks in the choir. Over time, all of the whispers will be turned into a comprehensive soundscape that remains as an intangible part of the Oude Kerk. Boltanski considers his work repeatable, like musical compositions are re-enacted time after time, even after the composer is no longer alive.

On 24 November at 9h30, Serpentine Gallery’s artistic director Hans Ulrich Obrist will interview Christian Boltanski about his work. This in-depth discussion is a continuation of their ongoing interaction (cfr Obrist’s The conversation series) and will be followed by a question-and-answer session. 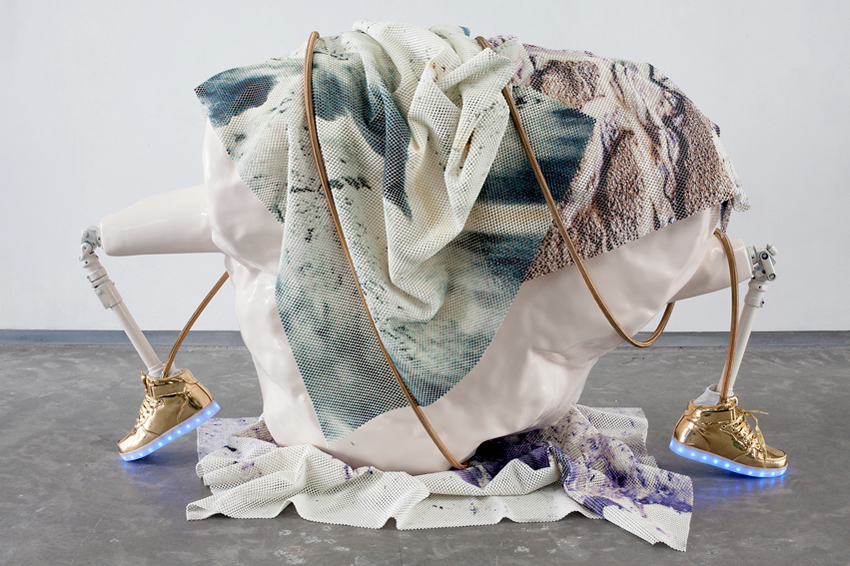 Foam presents the first major solo museum exhibition by Anouk Kruithof. As well as photography, her work includes video animations, installations, sculptures, publications, and performances. Their common premise is a fascination with the online representation of social issues. Kruithof subjects these to critical scrutiny by translating digital images into her own three-dimensional visual idiom. In her latest work, Kruithof questions the aesthetical way the causes and consequences of climate change are depicted online. This series was commissioned by Foam and created especially for this exhibition. In addition to her recent work, the exhibition presents a complete overview of her publications, giving insight into the versatility and development of her professional practice. 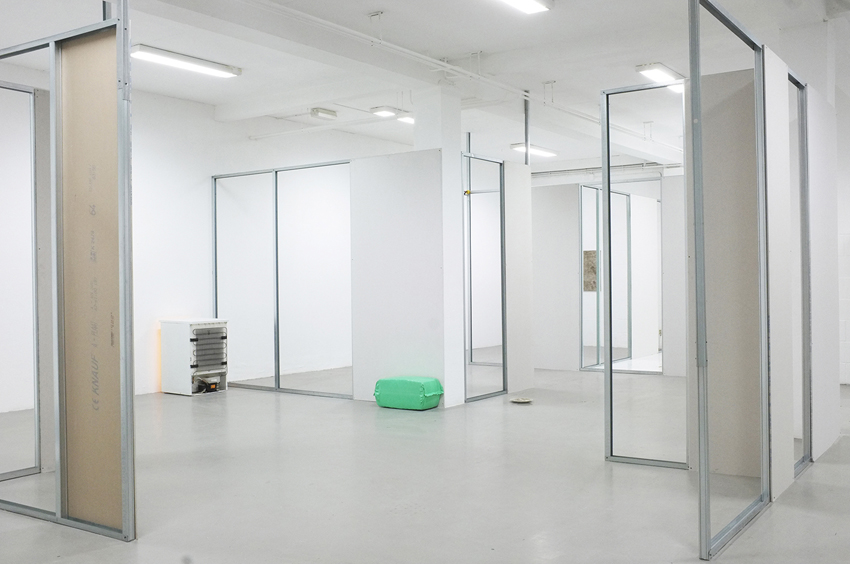 Peruvian born, Brussels based artist Nicolás Lamas’ work evolves around the interaction between things, and creates associations and exchanges without established rules. The Form of Decay – his first solo exhibition in Amsterdam – is a new installation placed somewhere between an office space and an anthropological site. The installation is structured around encounters between a series of objects belonging to distant times and spaces, where notions of indeterminacy, danger and uncertainty become apparent. Through the detachment of man-made items, organic materials and mass-produced objects from their original functions, the exhibition recreates an ambience both wild and aseptic. 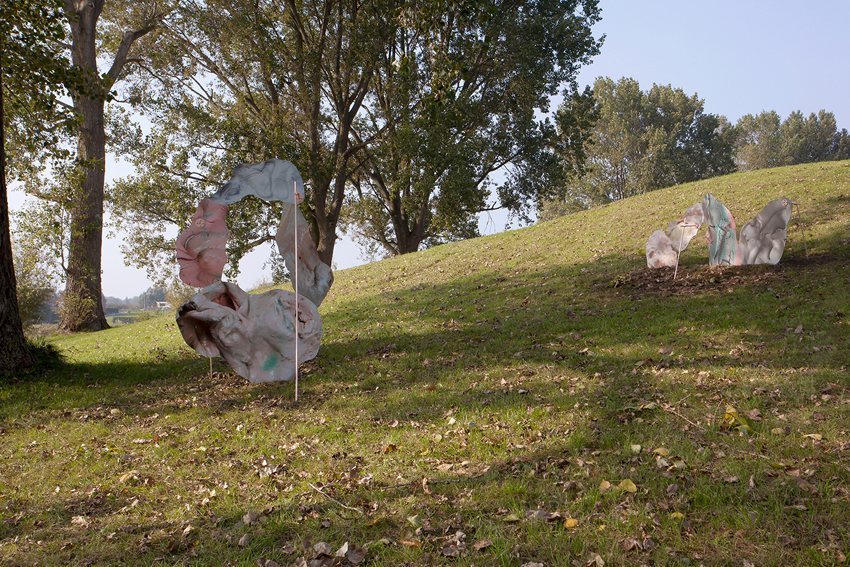 This show isn’t really in Amsterdam, and isn’t part of the official Amsterdam Art Weekend program either, but it’s a great exhibition located less than half an hour from the centre of Amsterdam. So we definitely also need to mention this com­pre­hen­sive ex­hi­bi­tion featuring all new works by Racehel de Joode – in­cluding five out­door sculp­tures. After a busy city weekend, this is the prefect way to unwind.