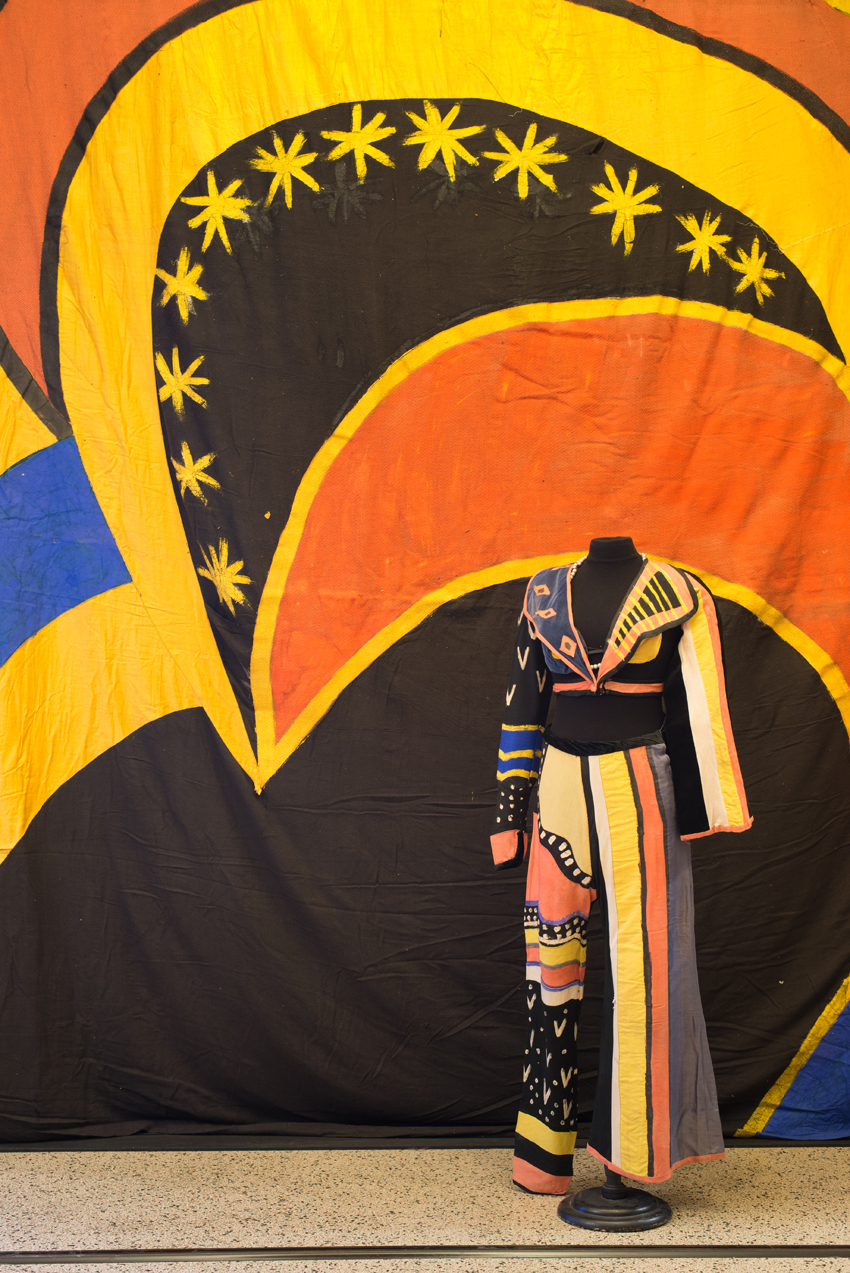 Voici des fleurs is a group exhibition imbued with the artistic legacy of Akarova – a celebrated Bruxelloise of the interwar years who devoted her life entirely to music, dance, choreography, painting and sculpture. La Loge invited a series of contemporary artists to exhibit alongside Akarova’s work and to freely relate to her ideas and production dynamics. As such, Voici des fleurs has been developed with and by contemporary artists as an attempt to reassess the potential of Akarova’s archive, not only as a subject of research, but above all as an invitation to indulge in its repository of living materials; the vestiges of an animated artistic practice. Voici des fleurs is not concerned with ‘re-evaluating’ or lending legitimacy to Akarova’s work. Its motivation is rather to expose and explore the free gestures and spontaneous attitude that underpinned and drove her art-making, while affirming core positions and dynamics within (contemporary) art practices. Akarova was an active personality who stepped up and made things happen. Through her charismatic presence, unrelenting drive and sheer energy, she managed to play a central role in the cultural life of the local arts community (she was, for instance, close to some of the key figures making the scene of the interwar years in Brussels such as Marcel-Louis Baugniet (first husband), Anto Carte, Raymond Duncan (who regularly visited Brussels), Jean-Jules Eggericx, Henry Van de Velde, and Herman Teirlinck among many others), while still safeguarding her independent position and artistic integrity.

Throughout her life, Akarova developed a unique and personal manner of connecting her different interests, artistic and otherwise, by applying the spirit of the all-encompassing total artwork (although she often wrote “music comes first”): – a singular “one-woman band” comprising music, dance, costumes, set design, sculpture, drawing, etc. In 1986, at the age of 82, Akarova donated a considerable part of her set design and costumes to the Musée des Archives d’Architecture Moderne – a decision that evidenced of the artist’s self-awareness of her own legacy, and perhaps even a desire to defy traditional disciplinary categories in favour of absorption within the larger context of the visual and applied arts.Thirty years after Akarova’s intuition to preserve her records – which adopted a non-traditional format and content in an archive fund dedicated to modern architecture, mainly representing male figures, her legacy continues to tickle the imagination. However, suffering from a lack of documentation, her live art and performances lack filmed documentation and remain open to interpretation. Even if testimonies and archival collections attest to a vivid and evocative practice rooted in the artistic networks of Ixelles, the artist’s open and elusive stage practice leaves us to speculate, imagine or project our own fantasies. Meanwhile, Akarova’s spectre lingers in and around La Loge. The institution that is housed within a modernist architecture and embedded within interpersonal networks and a local cultural inheritance that intersects contextually and geographically with Akarova’s own. As such, Voici des fleurs is less an homage or historical portrait, than it is a testimony to the development of an artistic vocabulary and attitude at a particular moment in time and space. Instead of inviting artists to directly respond to the conundrum of the Belgian avant-garde, the exhibition brings together common points, concerns, and sensibilities shared among all invited artists: Voici des fleurs looks at art and life as a set of relations, exploring the production dynamics at play in contemporary practices, the principle of gesamtkunst rather than that of artistic purity or medium specificity, and the networks of relationships that produce and are produced by an oeuvre. Through a diverse constellation of interdisciplinary bodies of work comprising film, voice, painting and performance, the exhibition considers ideas of self-affirmation, feminism, autonomy, and artistic integrity, at times taking recourse to the traditional crafts and the synthesis of the arts. Through understanding kinships between artworks made by artists of different generations, might we be able to reconsider and retrace the artistic steps of an artist whose legacy has become blurred over time, but whose work – through, archival materials, printed matter, and oral histories – continues to inspire today?

Voici des fleurs opens with a decor and matching costume, both designed and made by Akarova, which featured in Rhapsody in Blue (Gershwin) performed in 1939 in Salle Akarova (designed by Jean-Jules Eggerickx) not far from the Etangs d’Ixelles. As “props”, the objects are deactivated, though somehow they set the stage for the rest of the exhibition in which every so often the spectral presence of Akarova appears in shifting forms. In the second part of the hallway, a short video work made in 1989 by Ana Torfs and Jurgen Persijn chronicles a day in the company of Madame Akarova, who, despite her high age, still strikes us as ever-lively and animated. A year earlier, Torfs and Persijn had visited Akarova, entertainment and the avant-garde, 1920-1950 at the Archives d’Architecture Moderne, an exhibition curated by Caroline Mierop and Anne Van Loo. The exhibition, which is Akarova’s most important exhibition to date (the show was accompanied by an extaordinary eponymous monography), had left a lasting impression on them. Subsequently, in the framework of a school assignment, the duo shot a portrait of Akarova as an artist who was already becoming a legacy, and was already distancing herself from her work. In the triangular corridor of the ground floor, Hanne Lippard’s How to get rid of the body comprises a molded flesh-coloured curtain and an unsettling score in which the artist asks how to deal with the body once it has become a corpse; voiceless and devoid of life. Though most works in the exhibition appear quite bodily, tangible and material, they often display an interest in how bodies intersect with immaterial concepts such as time, decay, memory, and intergenerational transmission.

In the temple space, on-stage, a ghostlike image of Pauline Curnier Jardin’s grandmother enters a scenography made entirely from sequins. Using her fingertips, the artist has drawn motives in the sequined curtains; a simple, manual gesture, using a material that the artist felt an atttraction to as something that is both malleable and theatrical at once. In this particular setting, Curnier Jardin’s grandmother starts recounting which roles she would have wanted to perform as an amateur performer if her body would still allow her to. But her old, worn-out body is unable to reiterate or demonstrate the described movements and gestures. If Curnier Jardin’s work plays on the discrepancies between desire, memory, and imagination, resonating with the lack of documentation of Akarova’s performances, Leen Voet’s new series of drawings Marguerite #01-05 is an ode to Akarova’s approach to dance as “musical architecture”. The works are visual interpretations of the written descriptions of Salle Akarova on Avenue de l’Hippordrome 72 where the artist used to perform, and which are made available online and in the monographic catalogue on Akarova. Although archival photographs are available, it takes creative ingenuity to bring the memory of spaces alive again, injecting them with vivid color and vibration, while approaching them from a contemporary point of view. The series of new works, titled after Akarova’s real name Marguerite, are a continuation of Voet’s longterm interest in conceptually infiltrating the world of other artists in order to fictionalise the oeuvre and deconstruct mythologizing histories – a process in which the artist places importance on artist’s names (FELIX, Bert Vandael & co).

Finally, a series of brass sculptures by Caroline Mesquita appear as the still remnants of an otherworldly place. In the basement of La Loge, some of them reappear in a video work, coming alive as rusted, analogue, living machines. Straddling eroticism and violence, they interact with organic bodies, bearing a bizarre, unnatural relationship to human beings, while complicating the relation between sculpture and creator, machinery and inventor. The basement of La Loge is doubled as a backdrop, and appears as a machinery room of sorts. The crafted sculptures, reminiscent of costumes by Oskar Schlemmer or Akarova, are the outcome of an autonomous practice, guided by the materialty, physicality of the media she uses, but also by the choreography that emerges by manipulating them. Mesquita’s practice resonates with Akarova’s solo trajectory wherein each aspect was self-made and self-organised. Along these lines, the stereotyped characters in Mesquita’s film might remind us of the figures appropriated by Akarova from the repertoire of music history, such as the devil, the princess, the soldier, or the old lady, or could even be considered as these charachters’ contemporary versions: the security gard, the clearning lady, the cook…

In the adjacent space, Area of Overlap by Anne Hardy offers a constructed, theatrical setting or “terrain vague” wherein no human figure appears. The territory is unpeopled, undefined, and slightly unsettling, but as a closed-off sensory colourscape and mental image it is both very lively and physical. All the elements belonging to this colourful wasteland or total art work are the result of a studio-based practice and an experimentation with materials such as liquid metal, glass, and concrete. In this highly edited and choreographed space, the materials and objects have lost their original function, which lends them an autonomy and ambiguity to be used as a free and open-ended language. The exhibition closes with Still Life, a series of three collages by Lili Dujourie. The series was made at a particular time in the artist’s life and work when she wanted to distance herself from the silent videos of her own naked body in order to introduce colour and abstraction into her work, and before her more theatrical velvet sculptures. Like much of her later work, these collages move between abstraction and figuration, ornamentation and minimalism. The compositions are made by the act of ripping and overlapping coloured sheets of paper, slowly and in silence. The works are not cut, but ripped, implying a violent but still quiet physicality and intimacy. Time is central to Dujourie’s work: not only the time of concentration and decision-making, but also the time of transformation (in the artist’s own words: “life is change”). 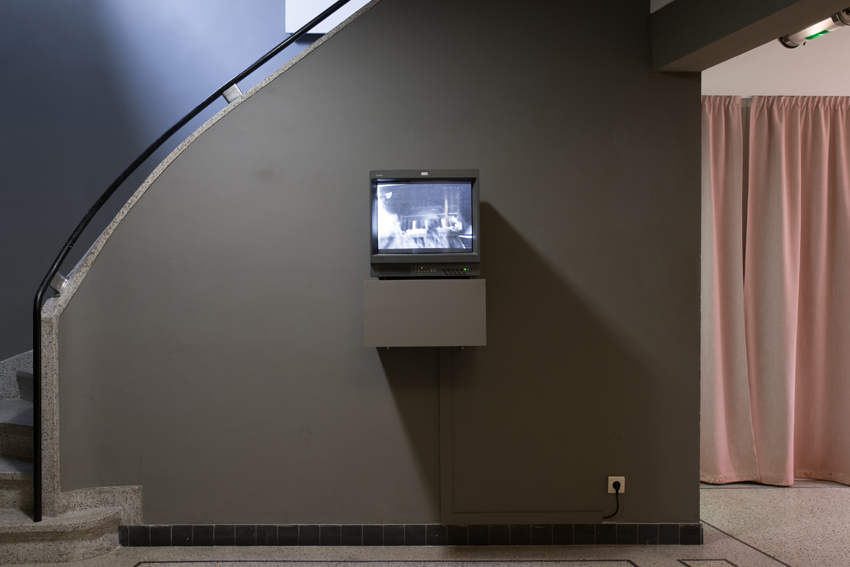 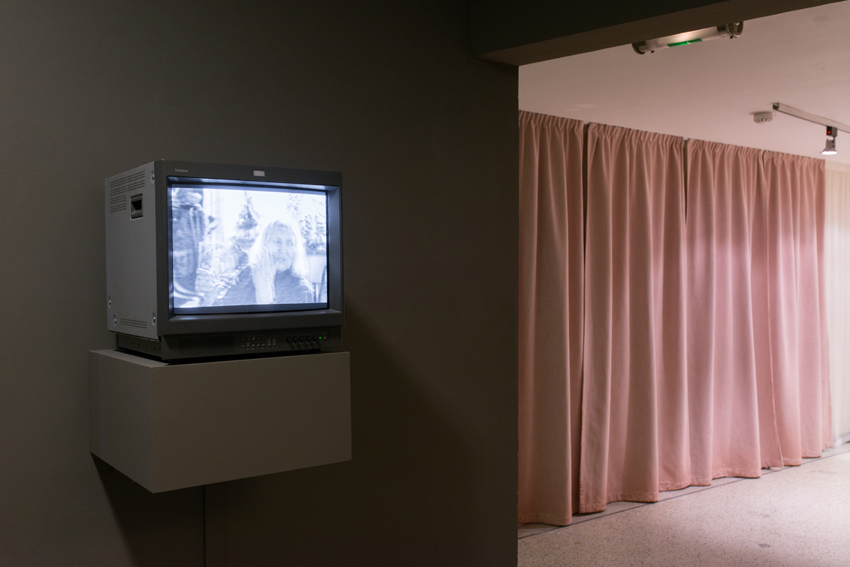 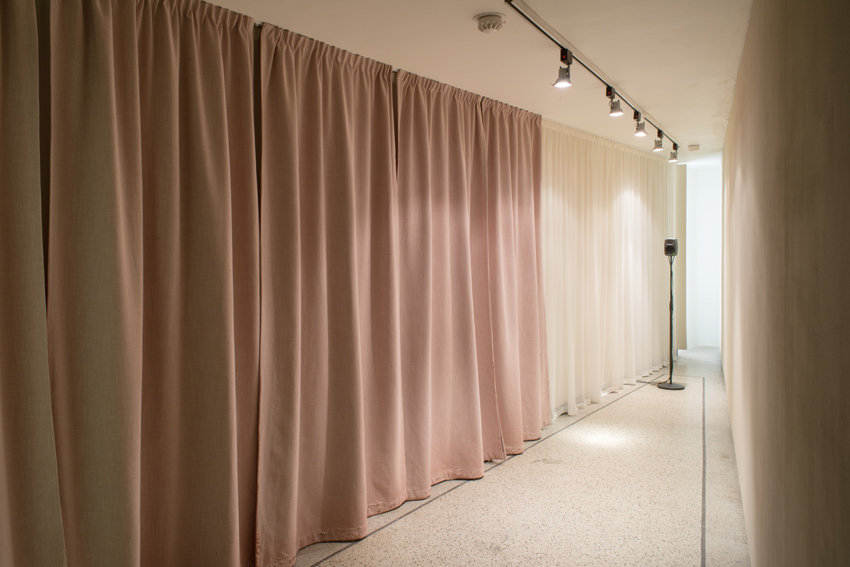 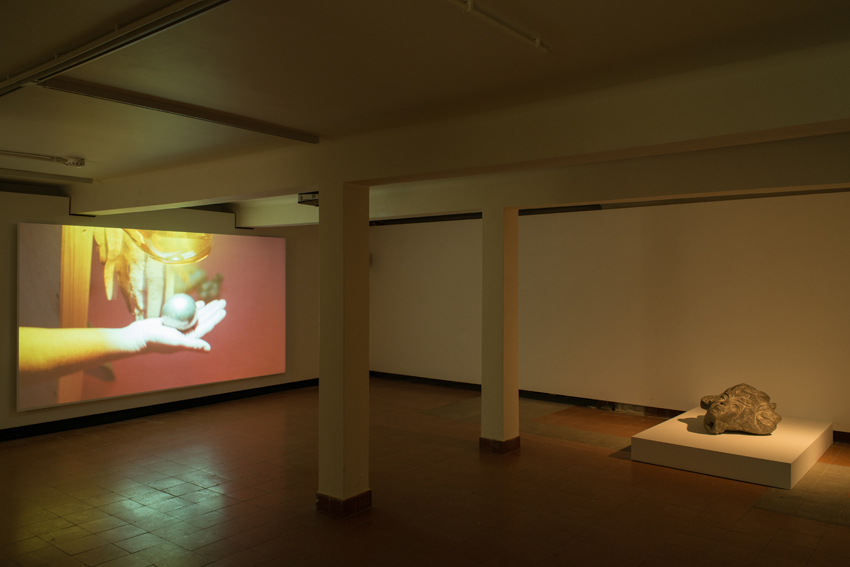 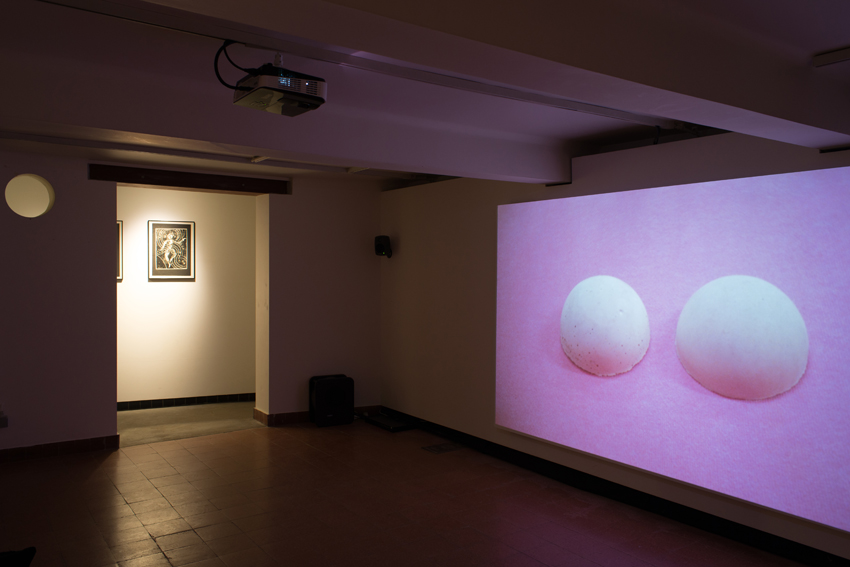 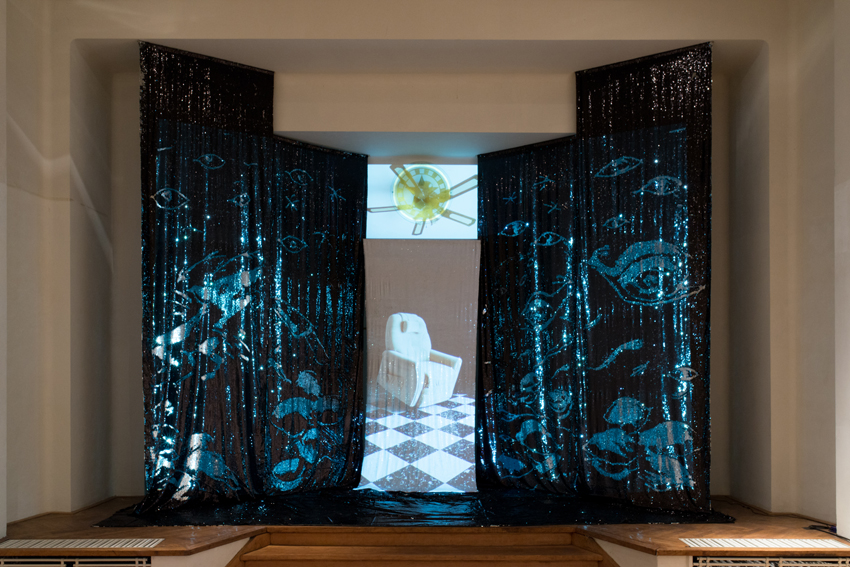 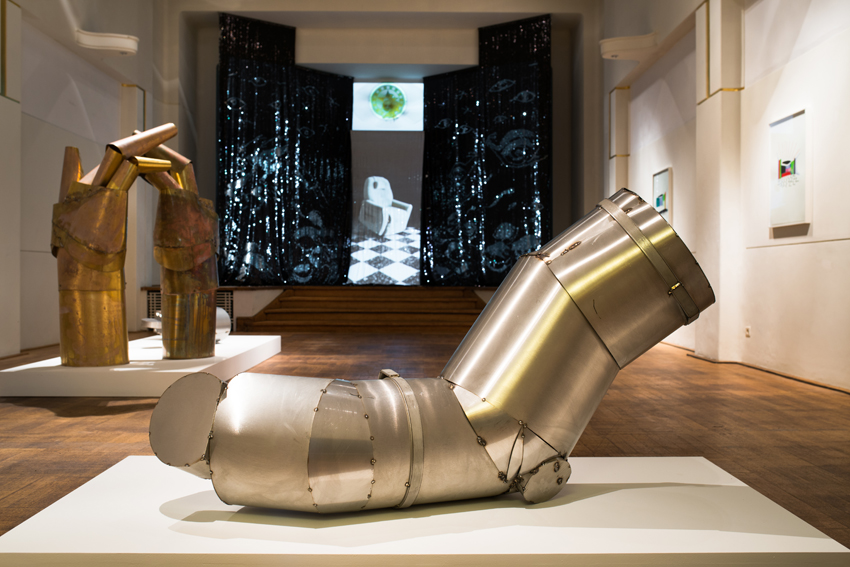 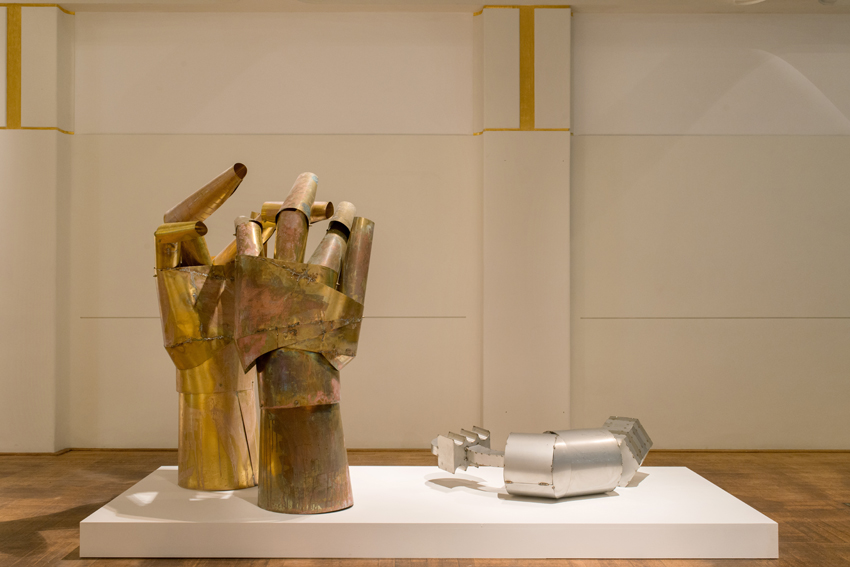 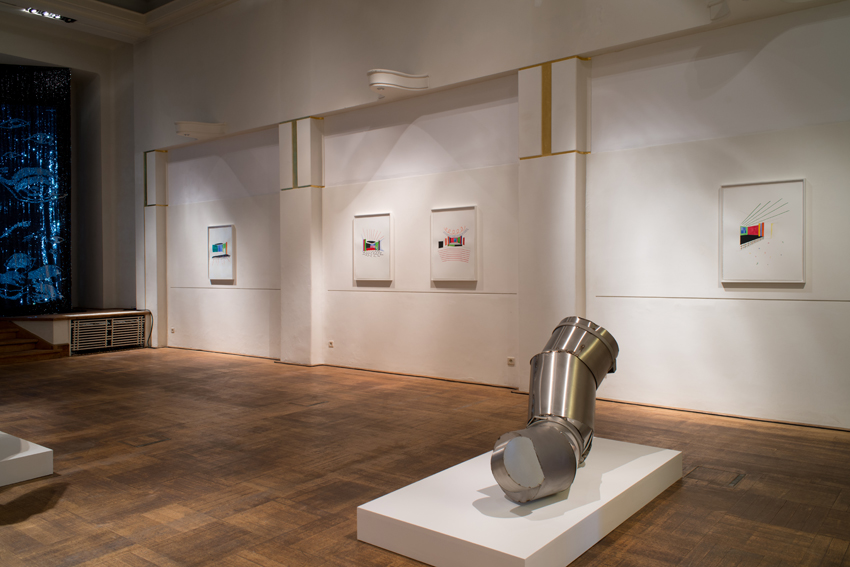 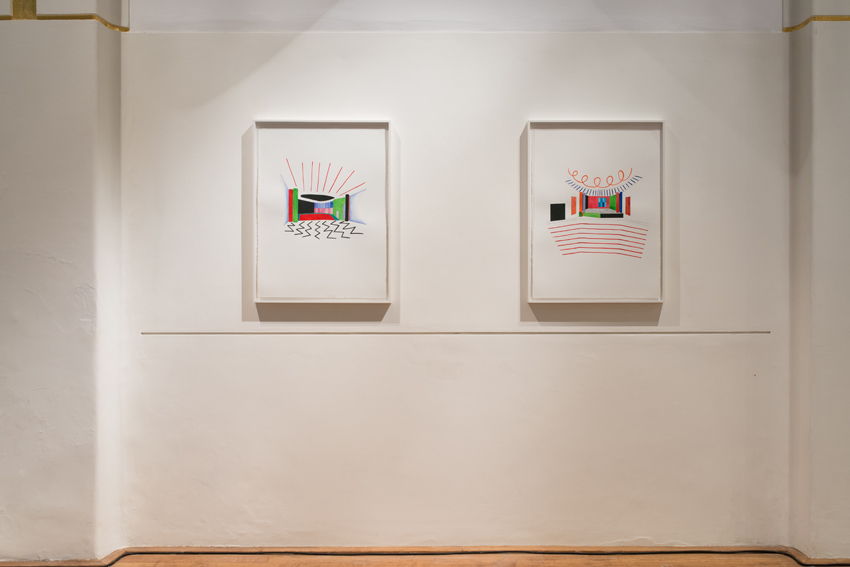 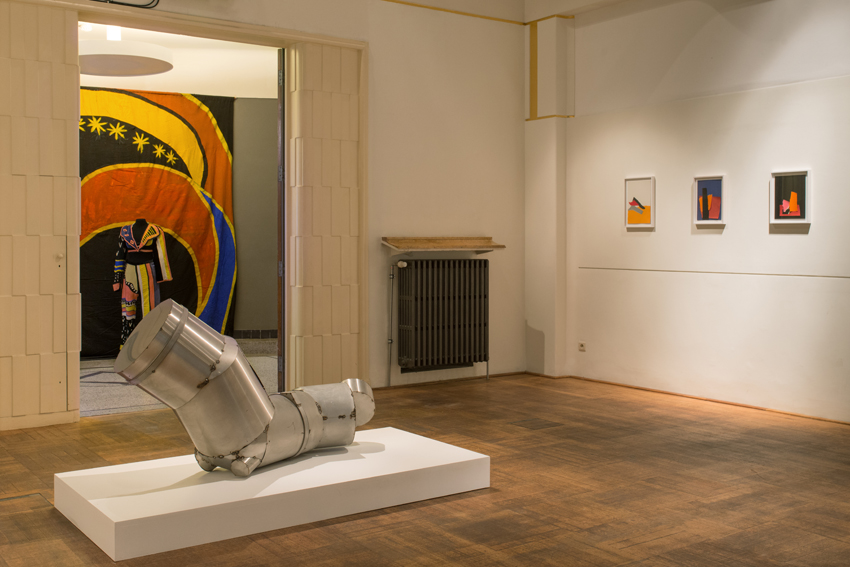 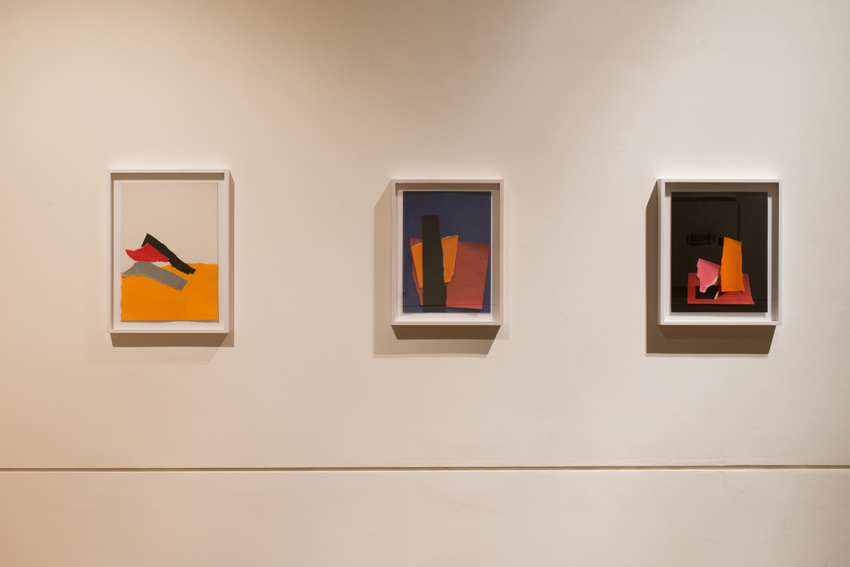 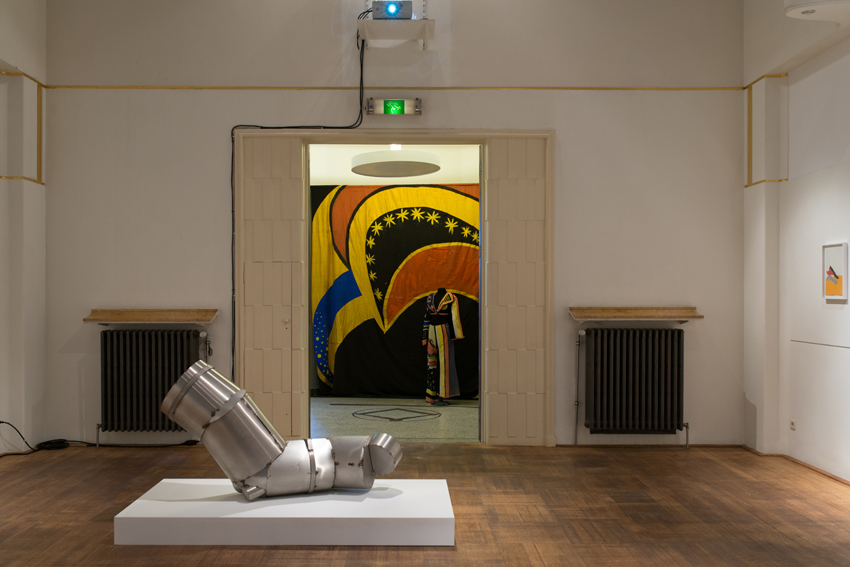 courtesy of the artists and La Loge, Brussels