Every two years, the art world flocks to Venice to see and discuss the current state of the arts. Spread over numerous national pavilions, two central exhibitions, and countless collateral exhibitions all over town, it would probably take you all summer to see everything. With so much going on, it’s hard to keep track of what’s really worth your time. Of course, this is no definite list, as there are plenty more things to see.

If you have the time, be sure to visit the first Italian retrospective for the Armenian-American painter Arshile Gorky at the Ca’ Pesaro; or the Chiesa della Madonna dell’Orto filled with Tintoretto paintings; the small survey dedicated to mythical Arte Povera artist Pino Pascali at Palazzo Cavanis and the Death of James Lee Byars right next door. Or rather the showroom Carlo Scarpa designed for Olivetti on Piazza San Marco. For now, we start this guide with our favourite 10 pavilions and exhibitions currently on view in Venice.

(By the way, the Venice Biennale – and most collateral exhibitions – run through 24 November.) 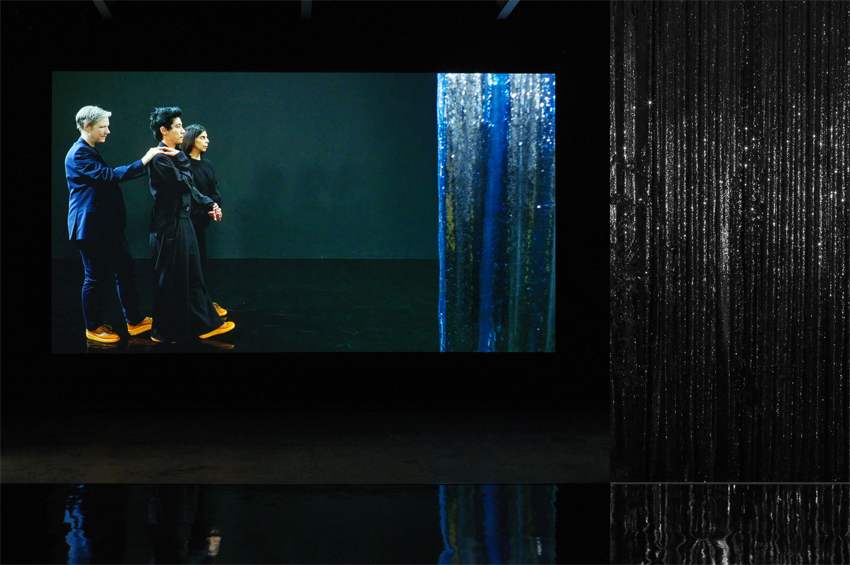 In the heart of Il Giardini, at the Swiss Pavillion, Pauline Boudry and Renate Lorenz present a beautiful cinematic installation, which explores resistance practices and combines postmodern choreography and urban dance with guerrilla techniques, and elements of Queer underground culture. A film installation with five performers from diverse dance backgrounds complicates the notion of backwards movements and their temporal and spatial meaning. Parts of the walks, solos and group dances are carried out backwards; others are digitally reversed, creating doubt and ambiguities for the installation as a whole. Entitled Moving Backwards, the exhibition reflects on the current political situation, with its regressive and reactionary forces of closure towards the other and towards everything that is different. Facing the scale of these recent regressions, the artists, rather than rushing into confrontation, suggest considering these ‘backward movements’ as a means of producing other forms of resistance and action. 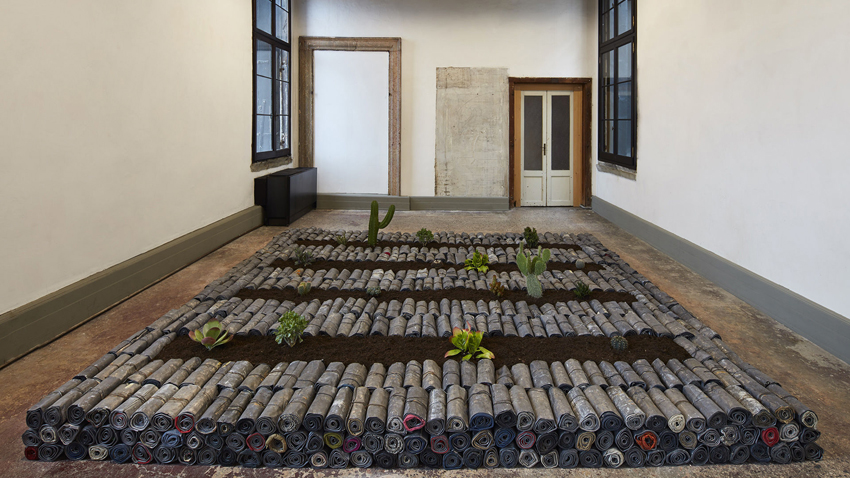 In 1967, the legendary curator Germano Celant coined the term Arte Povera to describe a group of young Italian artists using ‘poor’ materials such as wool, earth, lead, and wood. In using such throwaway materials they aimed to challenge and disrupt the values of the commercialised contemporary gallery system. As Arte Povera protagonists, Greek-Italian Jannis Kounellis and Celant have known each for other over half a century. This is the first retrospective of Kounellis’ work since his death in 2017. The show brings together over 70 works dating from 1958 to 2016, highlighting key moments in the evolution of Kounellis’ visual poetics, and establishing a dialogue between his works and the eighteenth-century spaces of Ca’ Corner della Regina. 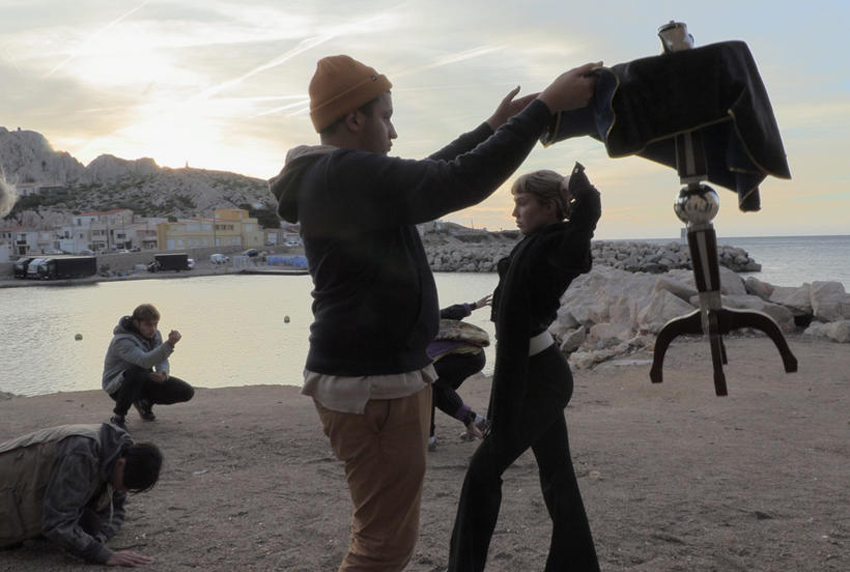 At first it might look like the French Pavilion is closed. What is usually the entrance, is now blocked by benches on which tired biennale visitors rest in the shade. Just walk around back. There is a tiny door that gives way to a rubble-filled basement, allegedly the start of the Laure Prouvost’s plans to dig a hole between the French and British pavilions. If you go up the stairs, you come in a bright room with a clear, sea-foam-blue floor, embedded with cigarette buds, cell phones, branches, glass sculptures of octopi, and even a couple of real doves. This space functions as an anti-Chambre for the cornerstone of Deep See Blue Surrounding You / Vois Ce Bleu Profond Te Fondre: a fictional film that takes the form of an initiatory journey filmed over the course of a road trip on horseback through France – from the Parisian suburbs to the northern region, from the Palais Idéal du Facteur Cheval to the Mediterranean Sea—and, finally, to Venice. The film is shown in a sculptural installation, using typical processes of the artist’s practice, such as leftover objects from the film, resin, clay, glass, plants or water vapor, and features performances interacting with the architecture and the objects. 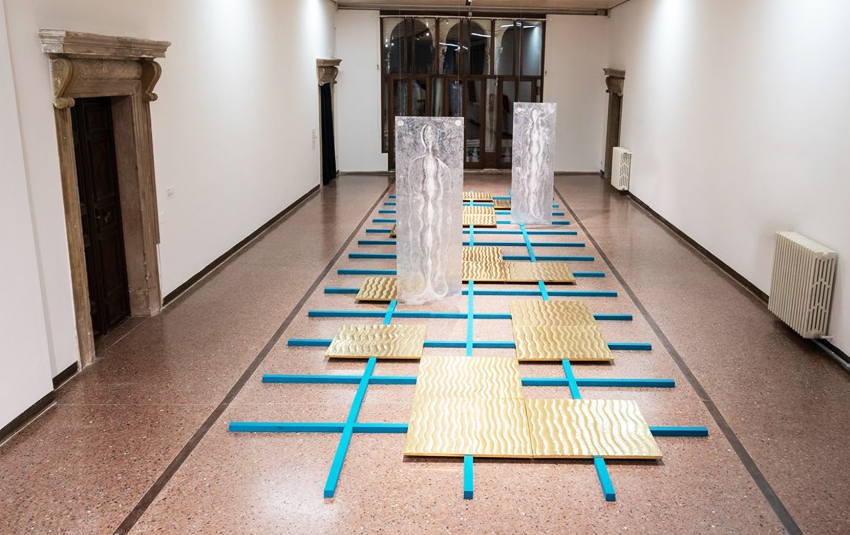 This has become a regular stop on a visit of the Venice Biennale. For a decade, the PinchukArtCentre has been awarding its biannual Future Generation Art Prize and since 2011 it presents all shortlisted artists in a group exhibition in Venice coinciding with the Biennale. This shortlist has features around 20 artists spanning all continents. This year’s exhibition presents – amongst others – work by former RijksAkademie resident Monira Al Qadiri, Korakrit Arunanondchai, Marguerite Humeau, Taus Makhacheva, and past and future Billboard Series’ artists Kasper Bosmans  and Rodrigo Hernández. 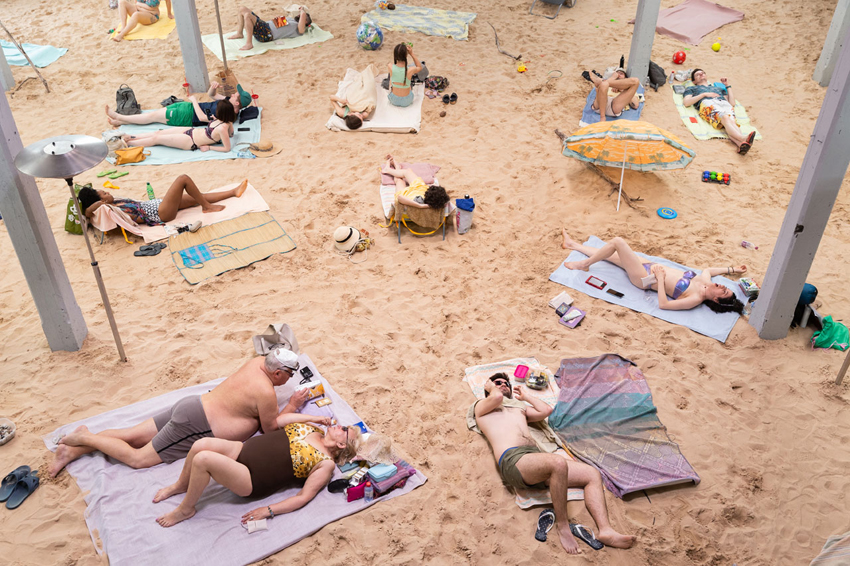 Sun & Sea (Marina) transforms the interior of a historic Marina Militare complex into an artificial beach scene, complete with sand, towels & umbrellas, sunscreen, magazines and other paraphernalia associated with seaside holidays. The audience watches from a mezzanine above, as performers sing an opera-performance. Gradually, we are introduced to each individual on the beach, as they sing (whilst lying down) about their private preoccupations, ranging from plans for future vacations to crippling fears of environmental catastrophe. We feel so much art about climate change is bad, but this is a revelation!

Performances are scheduled every Wednesday and Saturday – be sure to plan your visit accordingly! 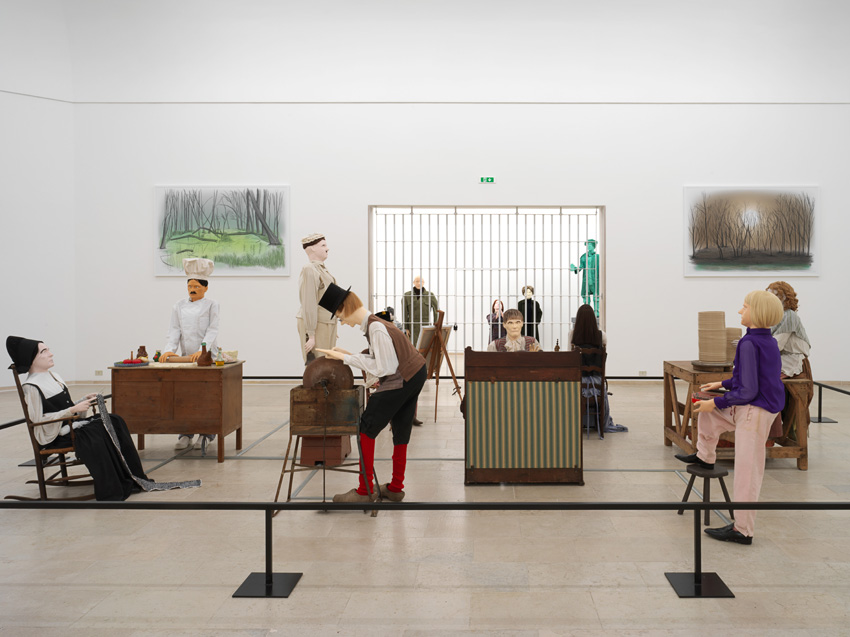 We are, of course, slightly biased, but this year’s presentation at the Belgian Pavilion is simply amazing. MONDO CANE presents itself as a local folkloric museum on the human figure. The exhibition contains some twenty  (mostly automated) dolls; a series of large illustrations depicting still-lifes; and steel bars that fence off the pavilion’s lateral recesses. At the centre of the building, you’ll find artisans – such as a potter, a knife-grinder and a spinner who, true to themselves, ply their respective trades. The side rooms of the pavilion are a parallel world peopled by louts, zombies, poets, psychotics, the insane, and the marginalized.

The project of Jos de Gruyter & Harald Thys for this years’ Venice Biennale is actually threefold. Besides an exhibition in the Belgian Pavilion, the artists also made a publication and a website – not as a tool to document their exhibition and reflect on it, but as two other ways of presenting their worldview. The publication consists of a compilation of articles that document a selection of cultural practices and a variety of facts and events about the world around us. Each article contains a descriptive text as well as one or more illustrations. The texts come from Wikipedia and appear, randomly, in Dutch, English, French, German and Italian. The website MONDO CANE is an additional artistic space for unfolding and exploring the ideas of the exhibition. The website allows visitors to navigate randomly through hundreds of YouTube videos selected by the artists. 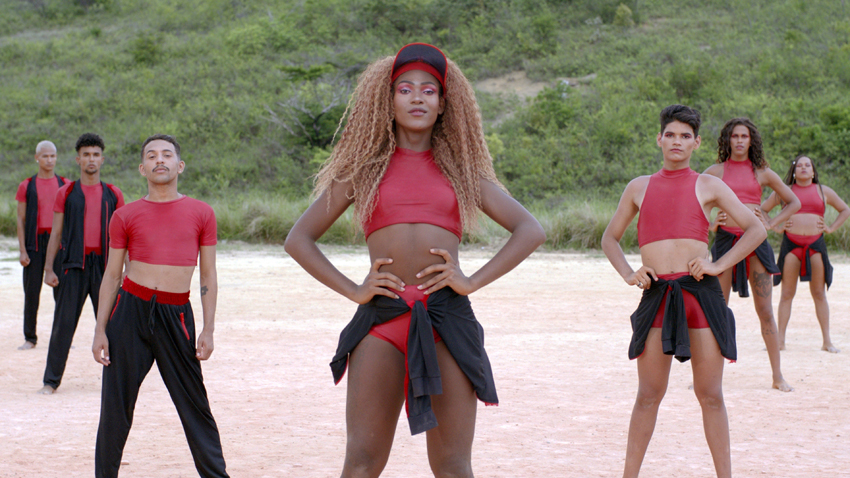 Another unmissable stop is the Brazilian Pavilion – tucked away in the back of Il Giardini. Bárbara Wagner & Benjamin de Burca present a new, two-channel video installation entitled Swinguerra. The video takes its title from swingueira, a popular dance movement in the north-east of Brazil, fused with the word guerra, meaning war. It takes the hybrid form of a musical documentary that blends fiction and documentary. The outcome of a collaborative and horizontal practice with the portrayed characters, the film accompanies rehearsals of three dance groups. Wagner & de Burca’s work focuses on the powerful expressions of popular culture in contemporary Brazil, and their complex relationship with international and local traditions. Swinguerra provides a deep and empathic view of contemporary Brazilian culture at a time of significant political and social tension.

Leonor Antunes: a seam, a surface, a hinge or a knot  at the Portugese Pavilion 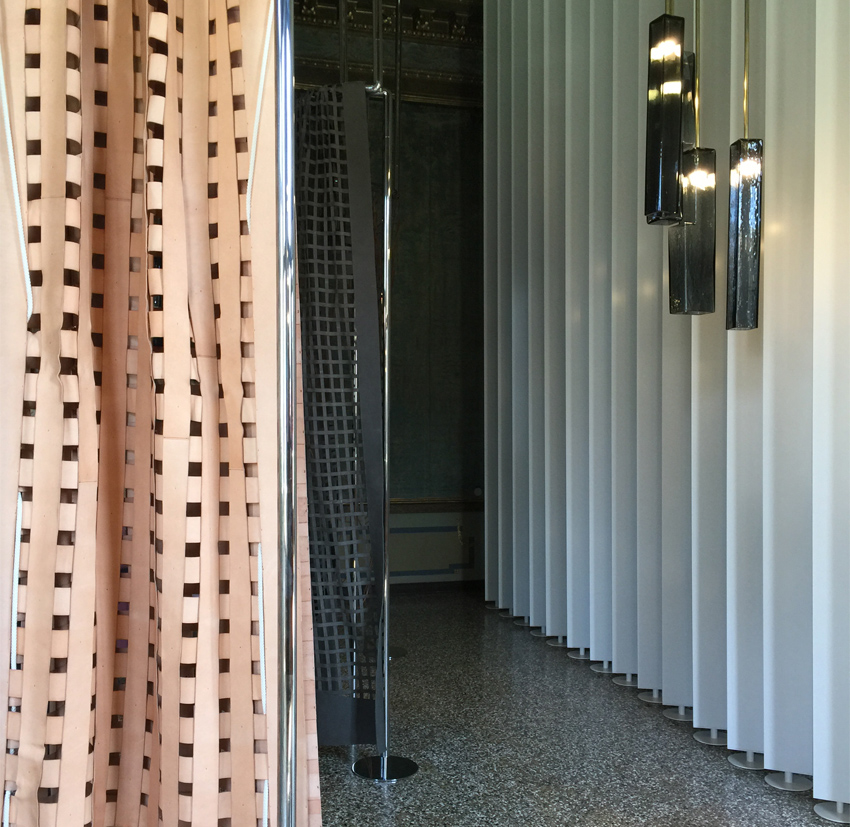 Located conveniently besides Academia Bridge, the Portugal Pavilion presents work by Berlin-based Leonor Antunes.  Engaging with histories of art, architecture, and design, Antunes’ work reflects on the functions of everyday objects and their potential to be translated into abstract sculptures. The exhibition’s point of departure is Antunes’ research into key figures in the cultural history of Venice, such as the architects and designers Carlo Scarpa, Franco Albini, and Franca Helg. Working with traditional makers from the region, Antunes links these cultural histories by looking at the intersection between Scarpa’s work and various forms of craftsmanship from Italy, Japan and Portugal, with materials including glass, wood and cork.

Cathy Wilkes at the UK Pavilion 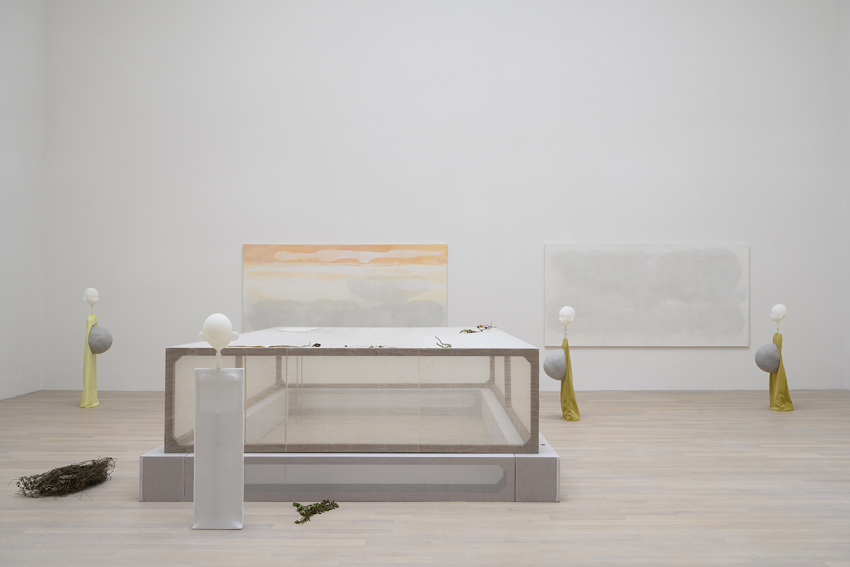 After going around Il Giardini for a few hours, Cathy Wilkes’ presentation at the UK Pavilion feels very different from everything else you’ve seen. Upon entering the pavilion, you are overtaken by a calmness in which nothing much seems to happen. It’s a silent space, at the same time disquieting and fascinating, proving the setting for an interconnected series of floor-bound sculptural installations, paintings and prints. Scattered throughout the different rooms of the pavilion are a number of objects – doll-like sculptures, delicate paintings, a Brillo pad, pottery and glassware, and more. The scene seems to depict a domestic space, in which the statues of balloon children and of what (possibly) is their mother, stand together with their everyday objects, in natural Venetian daylight. 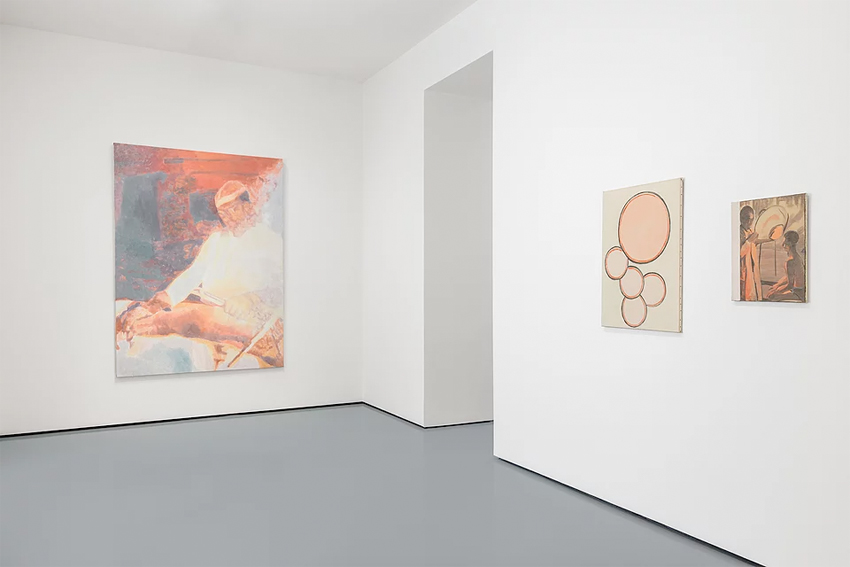 In 2001, Luc Tuymans took Venice by storm with paintings from his Mwana Kitoko series at the Belgian Pavilion – examining the country’s brutal colonial history in Congo. Eighteen years later he is back, with a blockbuster exhibition at François Pinault’s Palazzo Grazzi. We have to admit that sometimes we are a tad jaded: our visit to Palazzo Grazzi felt a bit like an obligatory stop – at first. The exhibition brings together over 80 of Tuymans’ works from the Pinault Collection, international museums and private collections, and focuses on the artist’s paintings from 1986 to today. And it is amazing! When you see Tuymans paintings hanging together in 27 halls, it’s undeniably impressive.

Be sure to also pick up an exhibition guide when visiting the show. Each painting is comprehensively but very clearly interpreted. You don’t need background info with every painting, but it does helps to understand Tuymans’ art and the way he sees the world.

Joan Jonas: Moving Off the Land II at Ocean Space 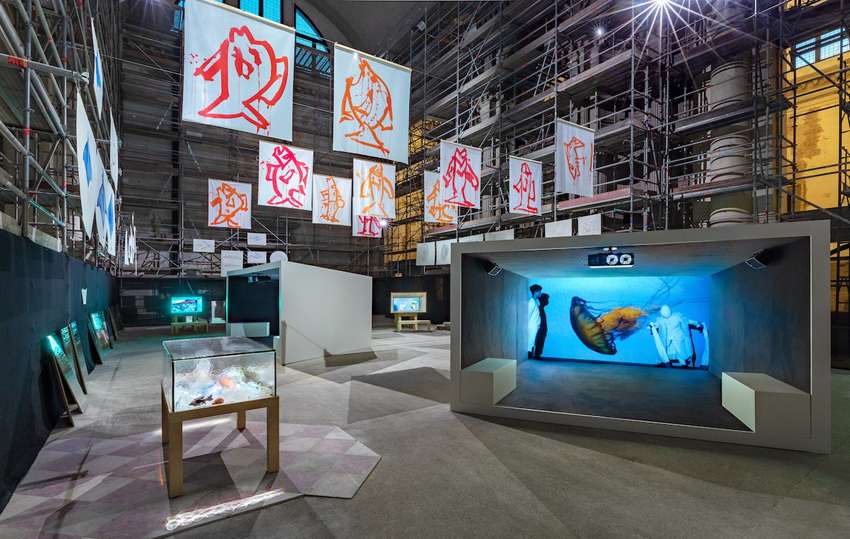 The Church of San Lorenzo has been closed to the public for more than a century, but re-opened earlier this year as Ocean Space, an arts center dedicated to scientific, academic, and artistic engagement with the high seas. Its first show is dedicated to American artist Joan Jonas. The installation is the culmination of three years of intensive research in aquariums around the world, and in the waters off the coast of Jamaica.

The oceans are a recurring motif in Jonas’s work. The show combines old and new work, and comprises video, sculpture, drawing, and sound works, centering on the role the oceans have played for cultures throughout history as a totemic, spiritual, and ecological touchstone.