The Arsenale was the largest pre-industrial production centre of the world. Its surface occupied 46 hectars, and it once hosted up to 2000 workers a day in full swing. Now it is converted in a 50.000 square metres  (25.000 of which indoor) exhibition space and functions as the second site of the Biennale activities. The second installment of our guide through this year’s Venice Biennale halts here. 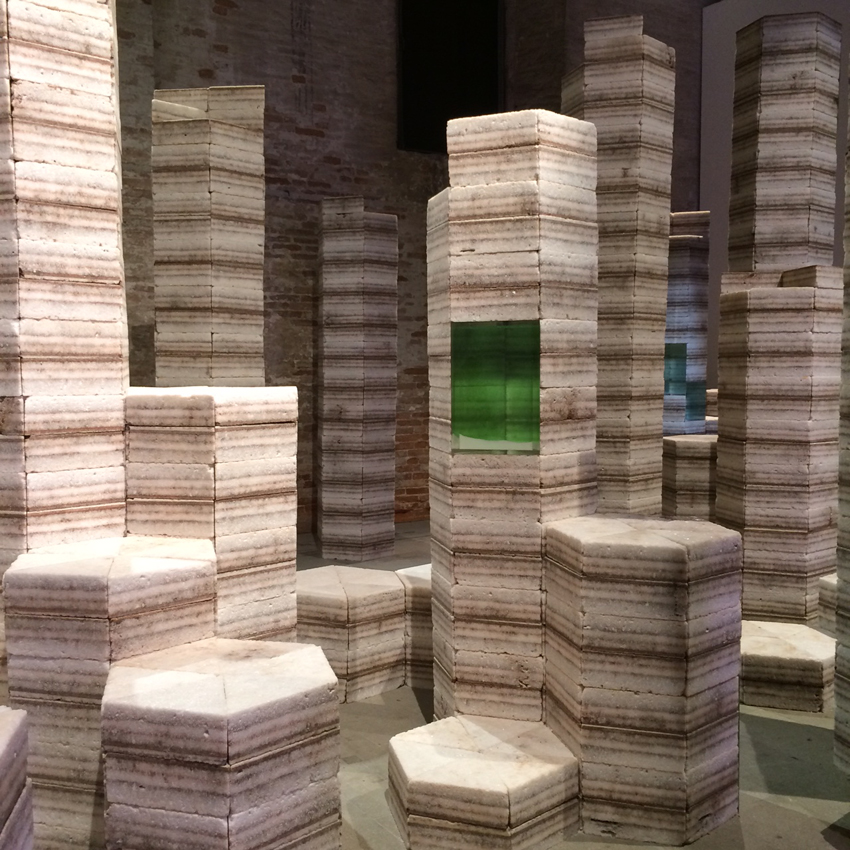 VIVA ARTE VIVA is both the title of the Biennale as it is of the central exhibition curated by Christine Macel. About half of Arsenale’s indoor space is made up by this exhibition –  the continuation of Macel’s exhibition that started in the central pavilion of Il Giardini. In her text, Macel describes the exhibition as an exclamation, a passionate outcry for art and the state of the artist: “In a world full of conflicts and shocks, art bears witness to the most precious part of what makes us human. It is the ultimate ground for reflection, individual expression, freedom, and for fundamental questions. But rather then broaching a single theme, VIVA ARTE VIVA offers a route that moulds the artists’ works and a context that favours access and understanding, generating connections, resonances and thoughts.” The journey unfolds over the course of nine chapters, or families of artists, beginning with two introductory parts in the Central Pavilion, followed by another seven across the Arsenale. Each chapter represents a Pavilion in itself, or rather a Trans-Pavilion as it is trans-national by nature but echoes the Biennale’s historical organisation into pavilions.

But honestly, we were not so taken by VIVA ARTE VIVA. The nine different Pavilions go in all directions without really going anywhere. They are too superficial – some of them are made up by only a handful of works – and, as a whole, the exhibition feels a bit outdated. There is a lot of older work, by older artists, that isn’t always suitable to address the problems contemporary society deals with. But of course, on the level of the actual artworks, there are also some amazing things on display. 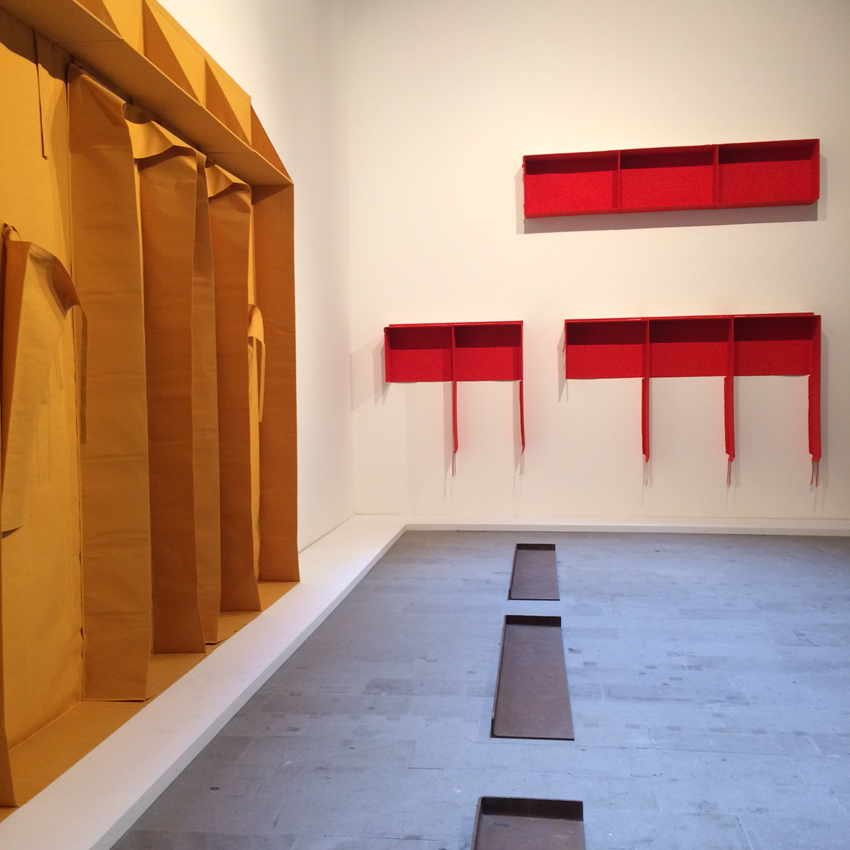 Right at the start of Arsenale, at the Pavilion of the Common, Franz Erhard Walther – the winner of the Gold Lion – presents three works from his early 1980s Wallformation series and a selection of Walking Pedestals from 1975, all inviting total involvement of the body. Walther does not provide instructions on how to activate his work though, leaving to the viewer to discover its capacities of use. Further down the endless halls of Arsenale, in the Pavilion of the Earth, there’s a cluster of works you also shouldn’t miss – bringing together a monumental semi-abstract turtle by Erika Verzutti, monumental performative sculptures of moths made in traditional Kosovar fabrics by Petrit Halilaj, an installation of salt pilars researching the exploitation of ‘the white petroleum’ lithium by Julian Charrière, and a large scale installation by Thu Van Tran including 16mm film, monumental photograms, site-specific painting and a selection of wax cast sculptures. 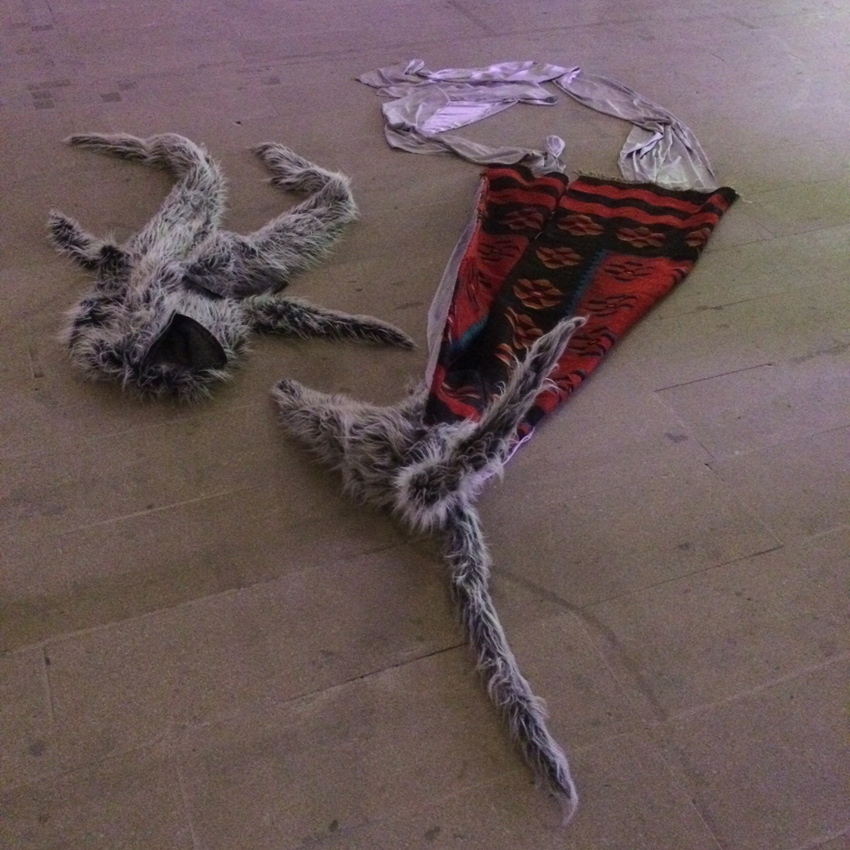 Petrit Halilaj – Do you realise there is a rainbow even if it’s night!?, 2017 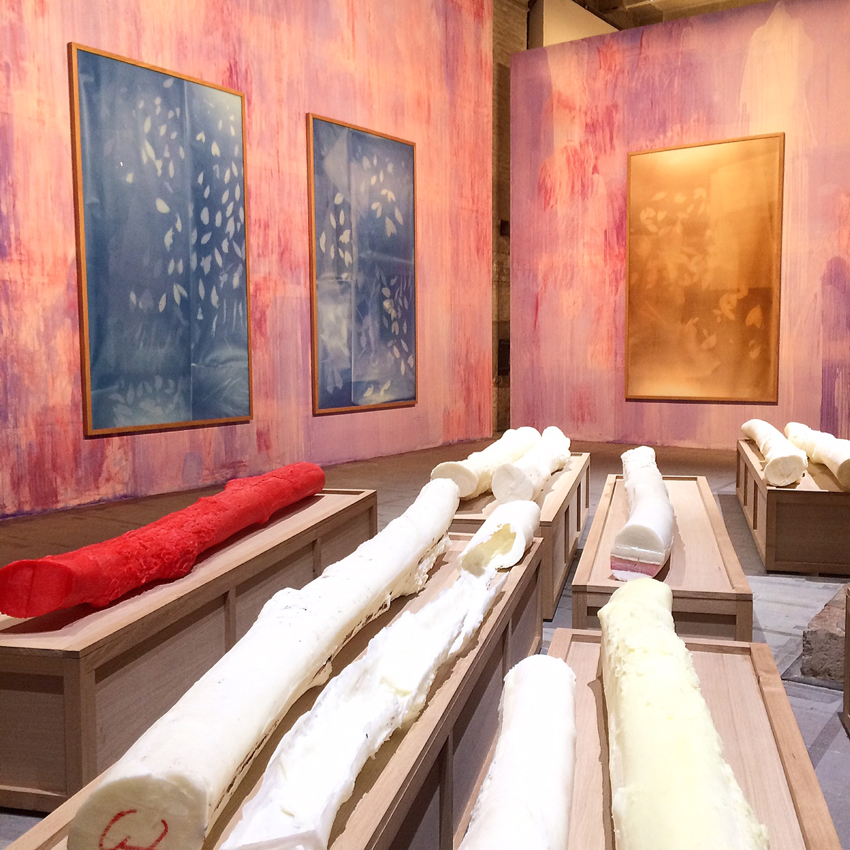 In the subsequent pavilion, the Pavilion of Traditions, there’s a number of interesting artists exploring not only recent history but also a more distant past, delving into historical references in an urge for legitimacy, rebirth and reinvention. Keep your eyes open for Francis Upritchards’ uncanny figures, Guan Xiao’s video David, Leonor Antunes’ immersive site-specific installation comprising a series of sculptures of leather, wood, metals and glass, and Anri Sala’s All of a Tremble (Encounter I) – reflecting the artist’s inquiry into to sculptural properties of sound. Towards the end of the exhibition, at the Pavilion of Time and Infinity, there’s Edith Dekyndt’s installation One Thousand and One Nights – captivating in all its simplicity: a man uses a broom to sweep together a carpet of dust perfectly framed by a slowly rotating rectangular spotlight. His endless sweeping kicks up small clouds of dust into the air, who then dissolve, waiting to be swept up all over again. 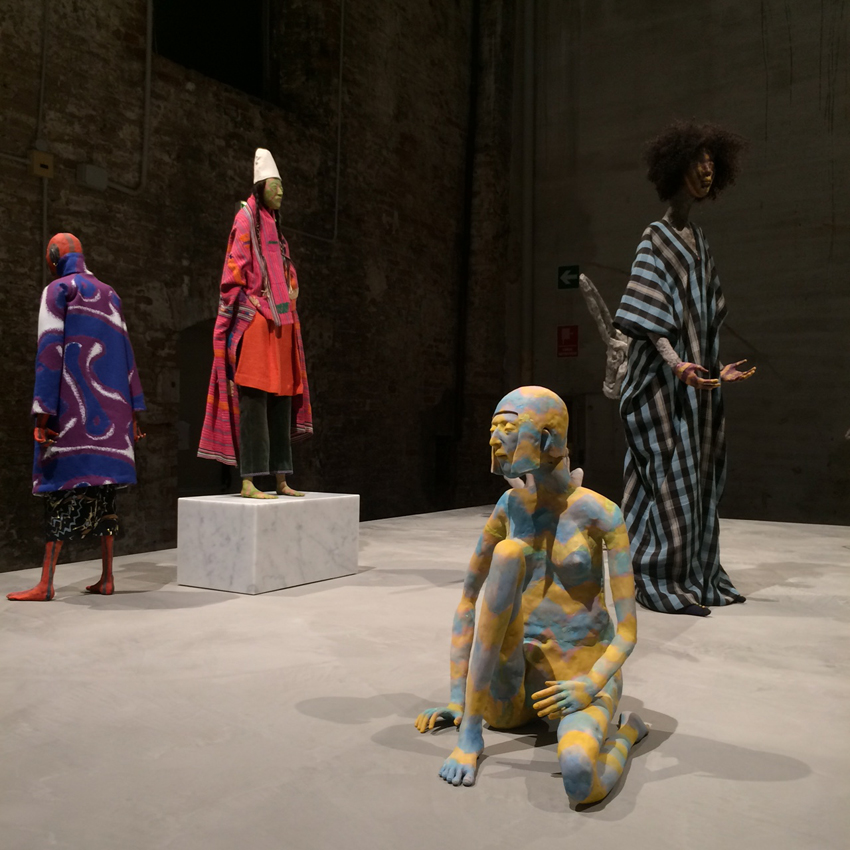 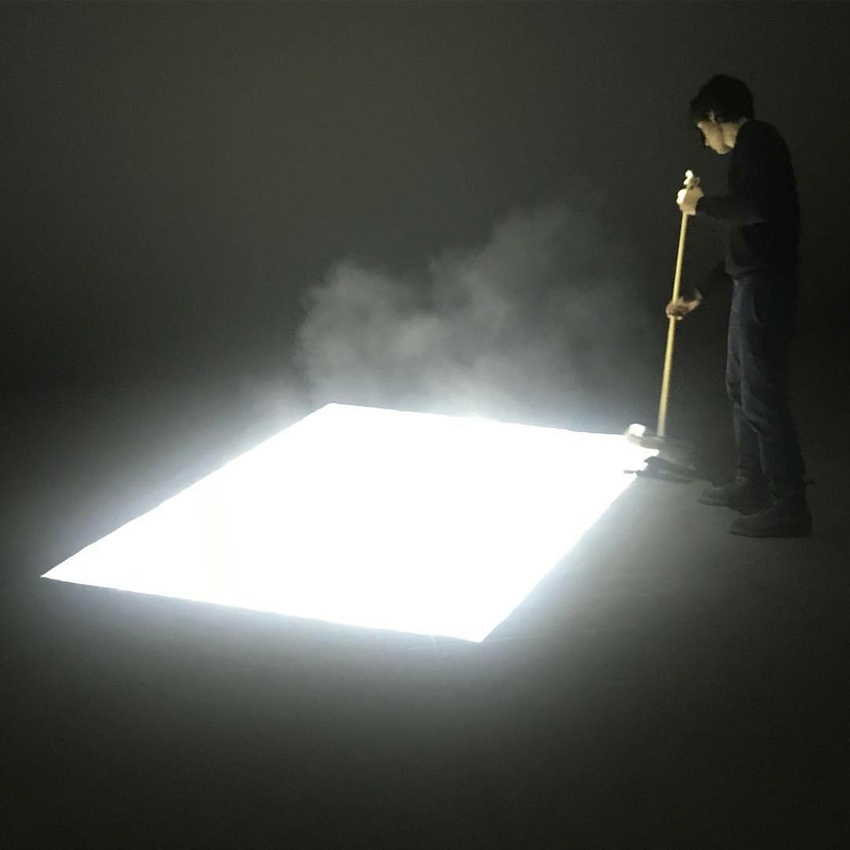 Edith Dekyndt – One Thousand and One Nights, 2016

The exhibition VIVA ARTE VIVA continues after a number of National Pavilions. At the actual docks, by the water, you’ll find Alicja Kwade’s Pars Pro Toto, composed of several circular natural stones spread out to form their own universe. And the neighbouring Giardino Delle Vergini, the exhibition ends with some very nice projects. There’s Bas Jan Ader’s historic video Broken Fall, Erika Verzutt’s small sculpture garden alluding to a burial place for pets, Hassan Kahn’s beautiful sound piece Composition for a Public Park – a rightful winner of the Silver Lion, and a beautiful project by Dagestani artist Taus Makhacheva. The only physical thing you’ll find of this last project is a small label saying there’s a performance happening at coordinates 45°23’30.8”N 12°24’47.7”E, where several performers appear and disappear on a capsized boat transported from the Caspian Sea of Dagestan to the open sea in front of the Venice Lagoon. If you rent a boat you could see it in person, but documentation of the performance should be on view online on La Biennale website – though we haven’t found it ourselves. We did come across a very interesting fim about this project the artist uploaded on Vimeo.

Carlos Amorales at the Mexican Pavilion

There are also a number of national pavilions located at Arsenale. Among them is the Mexican Pavilion, that commemorates the first decade of its participation with an official pavilion in the Biennale. In that pavilion, Carlos Amorales introduces us to a world where prints, sculpture, music, and cinema combine to give life and form to a new way of looking into reality, which materialize critical thinking and today’s problematics in contemporary art. 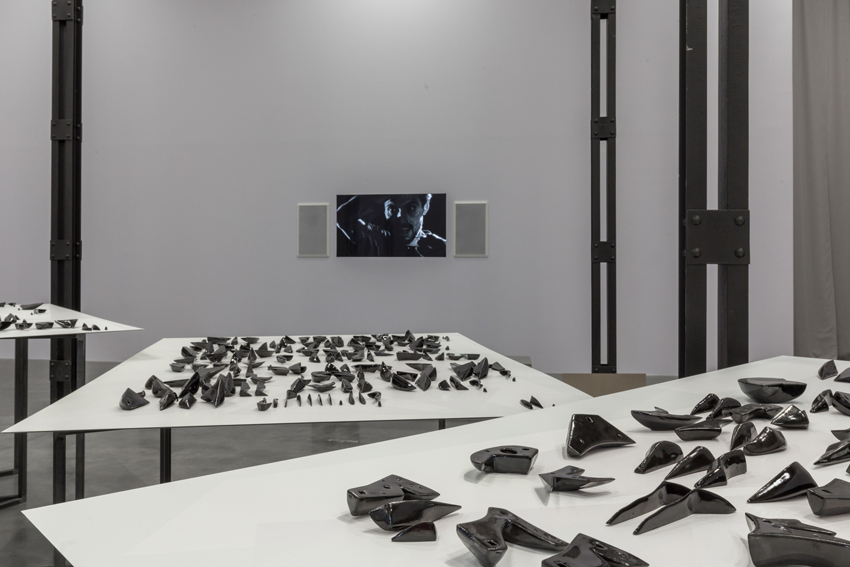 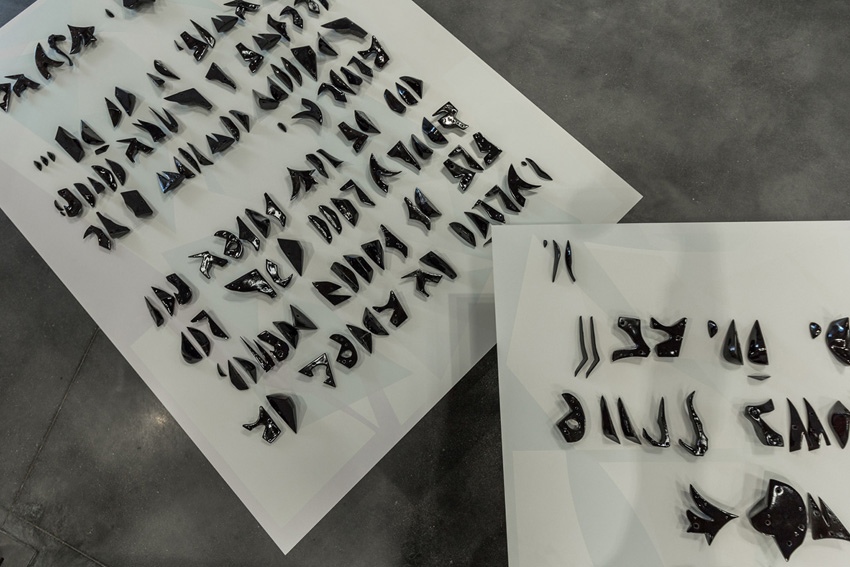 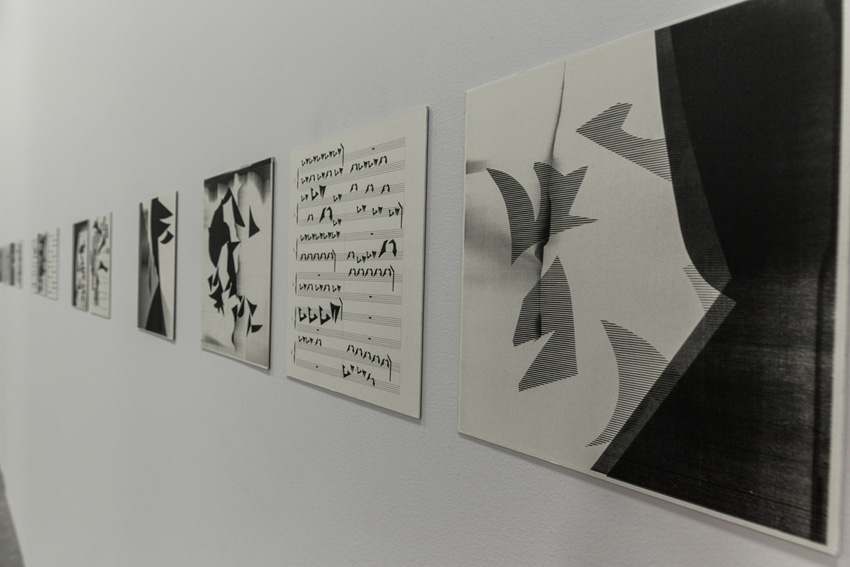 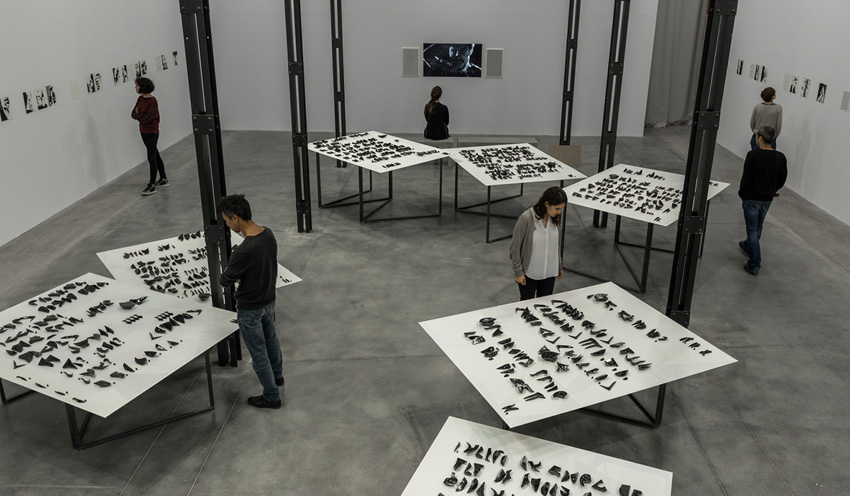 Carlos Amorales – Life in the Folds, 2017 at the Mexican Pavilion of the 2017 Venice Biennale. Photo: © VeniceDocumentationProject

The exhibition opens with a set of poems written in an encrypted alphabet created by the artist with abstract three-dimensional shapes. The texts displayed on seven tables, that formally refer us to paper sheets, imply a transition from the typographic to the phonetic. Each letter is a ceramic wind musical instrument, also known as ocarina that, when played, releases a specific sound for each letter. This coded language can be interpreted ver-bally, but can also be played as music. Around a thousand ocarinas establish a relation with an graphic musical score of 92 pages mounted on the walls of the pavilion. All these elements come together in the film The cursed village, which narrates the story of a migrant family that is lynched as they arrive to a foreign town. Where a pup-peteer controls the characters of the story and a music ensemble playing the ocarinas, interprets the soundtrack, dialogues, and soundscape of the film.

This two-person exhibition explores the disruptive power of storytelling in relation to historical and contemporary waves of forced migration. The exhibition starts with Mohau Modisakeng’s three-channel installation Passage, meditating on slavery’s dismemberment of African identity and its enduring erasure of personal histories. 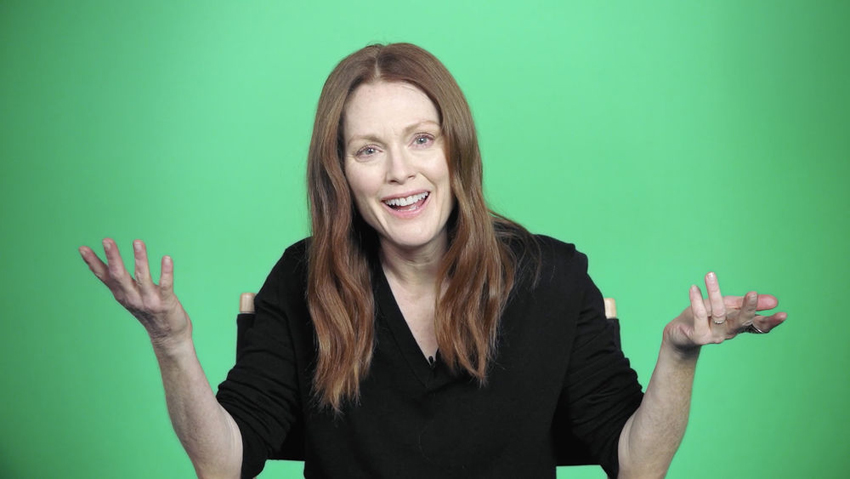 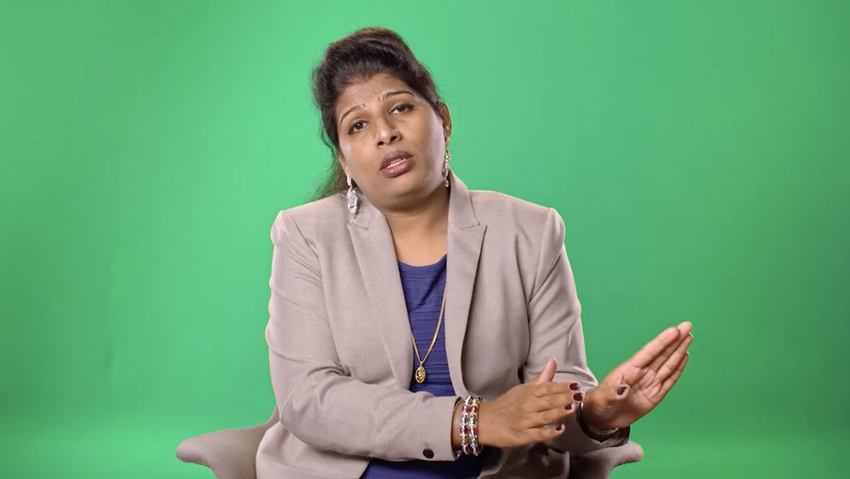 But it’s the second part of the exhibition, Candice Breitz’s seven-channel installation Love Story that really got our attention. The installation interrogates the mechanics of identification and the conditions under which empathy is produced. The work is based on the personal narratives of six individuals who have fled their countries in response to a range of oppressive conditions: a former child soldier from Angola, a transgender activist from India, an atheist from Somalia or somebody escaping the war-torn Syria, etc. It evokes the global scale of the ‘refugee-crisis’, evolving out of lengthy interviews with the six participants in the countries where they are seeking or have been granted asylum – Berlin, New York and Cape Town. The accounts shared by the interviewees are articulated twice by Love Story. In the first space of the installation, re-performed fragments from the six interviews are woven into a fast-packed montage featuring Hollywood actors Alex Baldwin and Julianne Moore (who are cast in the work as themselves: ‘an actor’ and ‘an actress’). In the second space, the original interviews unfold across six screens in their full duration. Love Story suspends viewers between the gritty firsthand accounts of the people who would typically remain nameless and faceless in the media, and the accesible drama featuring two actors who are the very embodiement of visibility, raising questions around how and when our attention is focused. 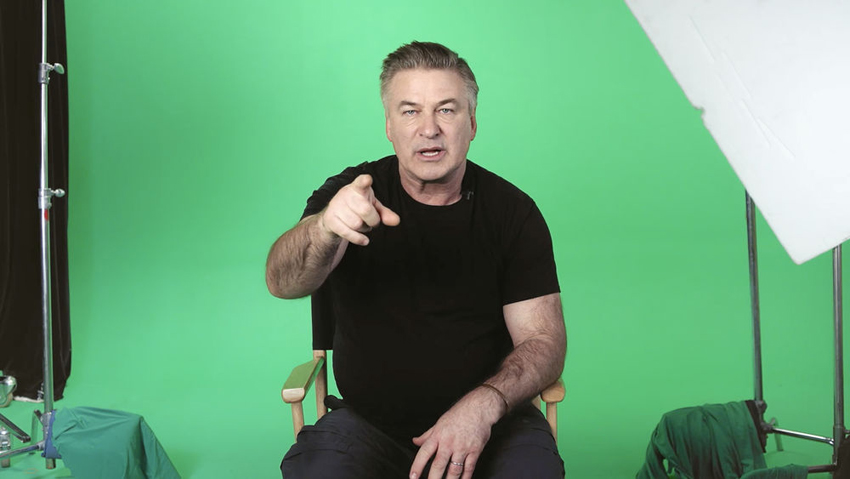 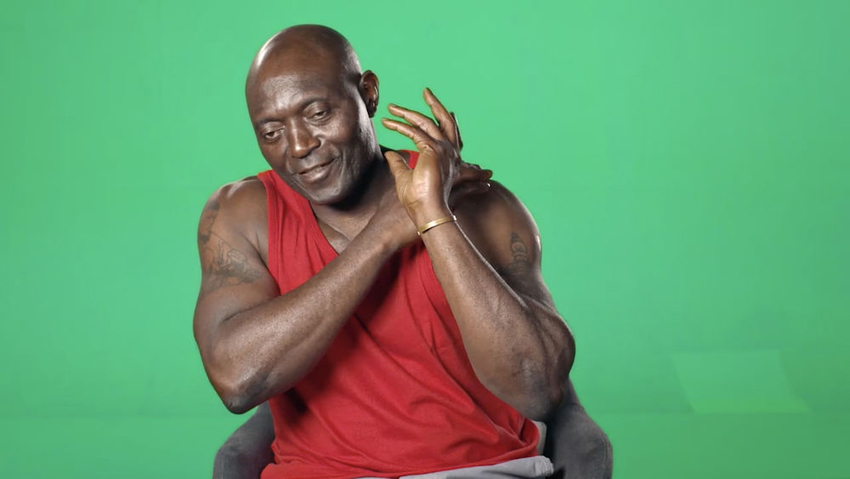 We would suggest to save seeing Love Story for last. It’s such a tremendous slap in the face that everything you see afterwards feels futile. Take your time to watch these films, and ponder your lucky life walking back to your hotel through the small streets of Venice. 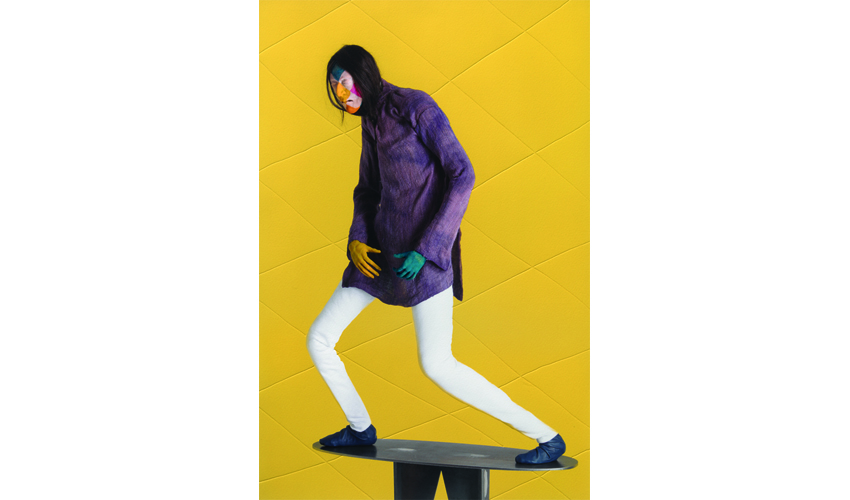