A big part of the appeal of Amsterdam Art Weekend comes from the open studios at the internationally renowned Rijksakademie. Once a year you get the chance to delve into the work and research of the artists taking part in this two-year residency. The Rijksakademie is one of the most prestigious residency programs around, and you can be sure you’ll see a lot of the names of the 44 graduates pop up in biennales in the next few years. Although we felt the bar wasn’t raised quite as high as it was over the last few years, there still are plenty good artists to see and discover.

We selected six artist-studios you should definitely visit. Of course, the list doesn’t end here… be sure to also have a look at the work of Kareem Lofty, Hamza Halloubi, Marije Gertenbach, Mercedes Azpilicueta, Iqra Tanveer and Geo Wyeth. 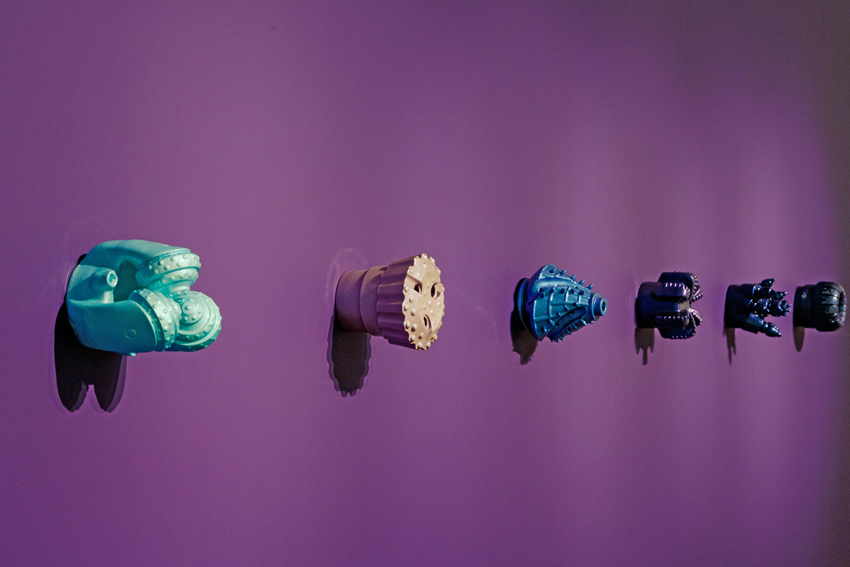 Monira Al Qadiri (°1983, KW) started this research upon the frightening principle that her country’s oil is running out and therefor its wealth stands to disappear. With her presentation at the Rijksakademie, Al Qadiri renders the hidden and mysterious activity of drilling for oil visible. A series of 3D-printed drilling heads are mounted on a purple wall. The printed plastic has been meticulously refined until they looks like ceramics. The works have different colours, but all have the iridescent sheen of pearls – a reference to Kuwait’s now defunct pearl diving industry.

By presenting the drill heads in an almost reverential way, clean and unattached from their industrial engines, Monira Al Qadiri imagines a future where the present became honoured history. 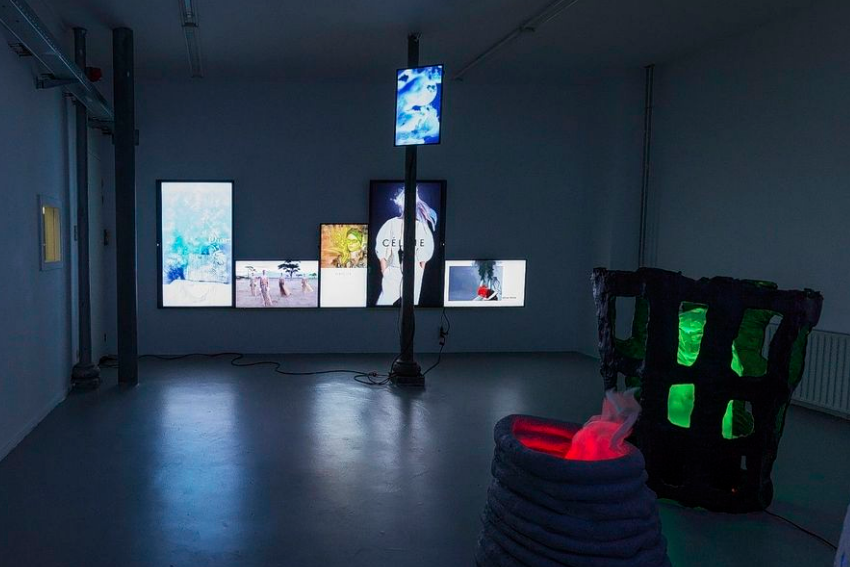 The work by Juliaan Andeweg (°1986, NL) is presented in two studios – we preferred the larger one, as it feels more complete and allows you to really enter the universe of the artist. Upon entering, you are immersed in what feels like a darker rendering of Greek mythological stories. 5 ceramic pots shoot out coloured flames, referring to the circular portals to the underworld as described in stories like Homer’s Odyssey. On a wall opposing the pots, a series of animated visuals of luxury fashion ads display the models as fire-breathing contemporary Valkyries. The whole studio is dimly lit and a soft soundtrack plays in the background. Natural cycles, alchemy and the commonplace find each other here and it makes for a fascinating image. 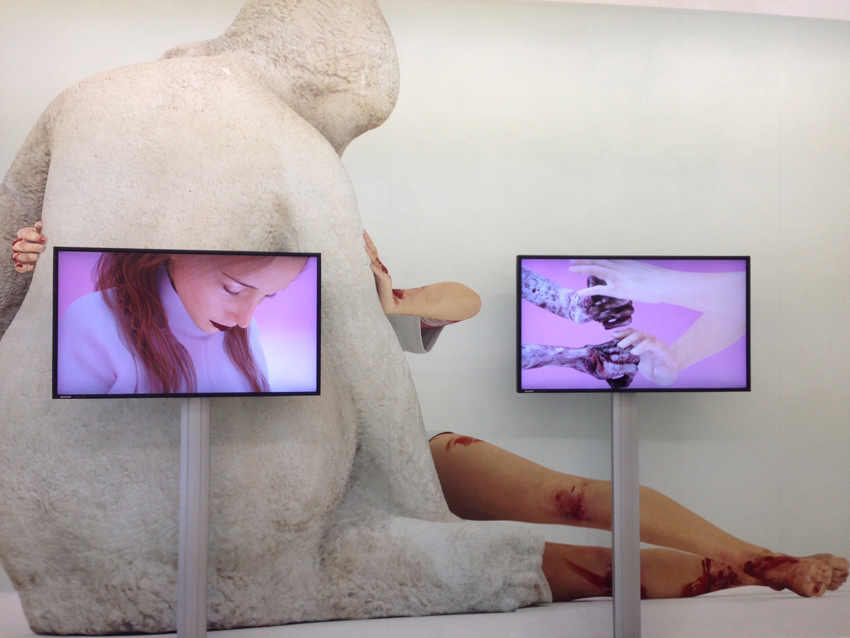 Two videos against a printed, wall-high backdrop make up the rather simple but begetting installation of Kate Cooper (°1984, UK). She uses the aesthetics of advertising and consumerism to create her own female characters, performing acts of cleaning and caring. One arresting moment in the video is when one character’s lips first disperse and then slither off the woman’s face and out of sight, leaving only a red trace on her blouse. This is an example of Kate Cooper’s interest in how her computer generated images can exist as autonomous entities with a logic of their own.

In their movies, performances, installations and photographs, Sander Breure (°1985, NL) & Witte van Hulzen (°1984 NL) focus on the behaviour of and the relationships between people. At RijksakademieOpen, they show a fascinating documentary film made from found footage of their recent 786-hour performance How can we know the dancer from the dance. For this work, which took place between 1 May and 28 October, Breure & van Hulzen created a choreography of the many behaviours, gestures and movements taking place at Utrecht station. For six months, five days a week, six hours a day, various actors performed a choreography in the station based on the gestures we share with hundreds of people, specific to public areas. At first glance, people pass by as one monotonous mass of bodies; everyone seems to move in the same way. If you look closer though, you see that no one actually looks the same and everyone moves differently – until you notice some people moving in exactly the same way. Mesmerising! 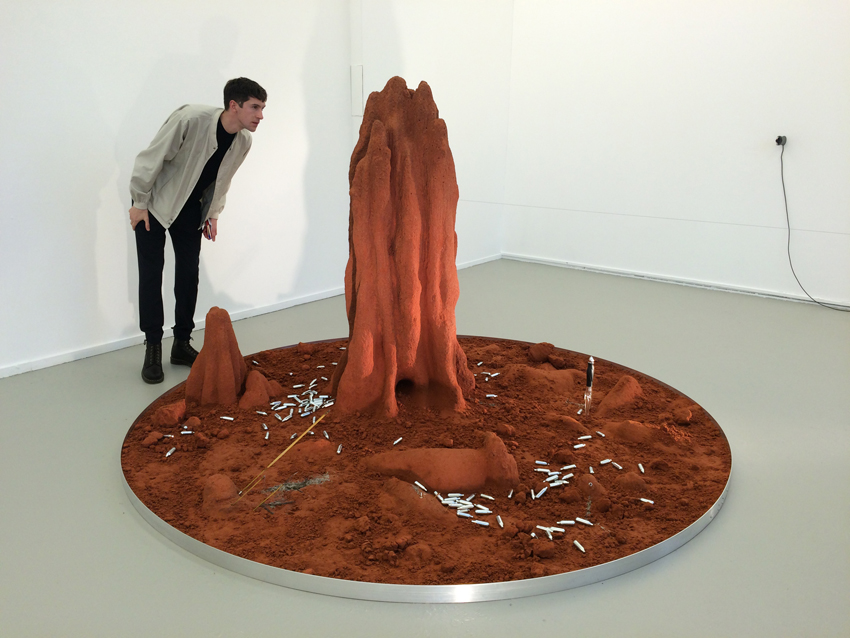 Dit-Cilinn (°1983, SE/TH) mixes man-made, industrial materials with natural media, insisting that the difference between both is artifical and imposed upon us by linguistics. Her open studio beckons visitors with a loud, crackling sound which echoes through the hallways of the Rijksakademie at regular intervals. Once inside the studio, we see the sound originates from a taser mounted to the wall. Two other installations complete the presentation, both playing upon the same mix of natural and cultural. One installation looks like a larger-than-life, burnt orange termite mount, surrounded by small, silver gas cylinders and incense sticks. The installation looks like a votive scene or the remains of a shamanist ritual. Another scene is a perfectly recreated swamp (complete with disintegrating skeleton, mud and moss), with an overturned shopping trolley being overtaken by branches and undergrowth. Dit-Cilinn’s work shows a dissolving of boundaries between nature and culture, insisting that they are two sides of one coin. 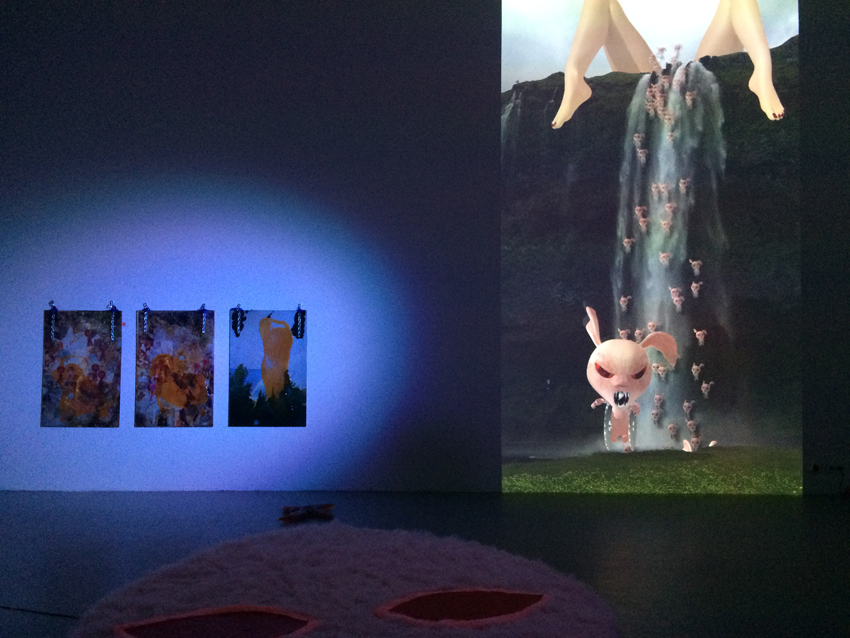 Josefin Arnell’s (°1984, SE/NL) presentation takes place in the top studio of the academy, far away from everyone else’s. The distance is figurative as well as literal, because once you’ve gone up several stairs, you’ve arrived in a world completely different from the one below. Upon entering the space, you are immediately taken by the sugary smell of cotton candy and the overwhelming sight of a gigantic screen, showing a video-loop of a waterfall squirting murderous-looking pink rabbits. To us, the most fascinating work is Arnell’s two-channel video Gag reflex / I wanna puke in heaven. The video shows three teenagers laughing hysterically while putting their fingers in their mouths and puking pink liquids, again and again, until there’s nothing left but bile. The work reflects Josephine Arnell’s research into cleansing rituals, in which vomiting is often used to forge spiritual insight.