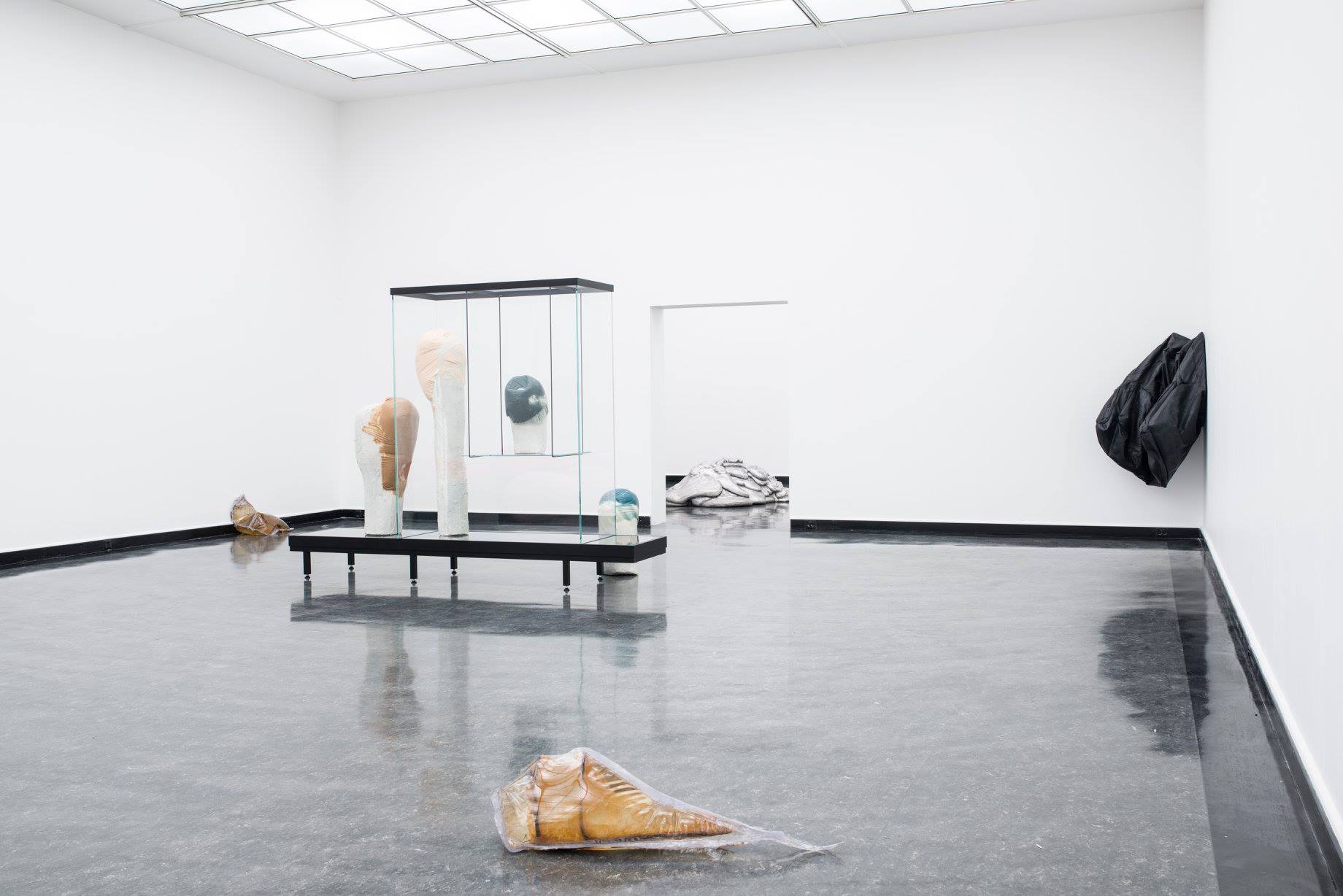 As part of the triennial Bergen Assembly 2016, the German PRAXES develops a year-long episodic and itinerant investigation centered on the work of two artists: Lynda Benglis and Marvin Gaye Chetwynd.

The investigation of Benglis’s work is created in collaboration with numerous Bergen venues and communities  – such as an early stand-alone installation at KODE Art Museums of Bergen, a ceramics survey and conference at Bergen School of Architecture, a larger series of new paper sculptures at Kunstgarasjen, and three early video works at Entrée – but the exhibition Adhesive Products is the first to also include works by other artists.

Tracing ideas of suspended fluidity and mushrooming masses sliding off the walls and spilling over the floors, PRAXES and Bergen Kunsthall present a group show with works by Nairy Baghramian, Olga Balema, Lynda Benglis, Daiga Grantina, Sterling Ruby and Kaari Upson. Departing from ‘the frozen gesture’, a term coined by art critic Robert Pincus-Witten in connection to the early works of Lynda Benglis, this exhibition trails not only a liquid materiality, but a wide range of gestural action that is unafraid of the theatrical, the decorative, the vulgar.

In the late 1960s, Benglis began a series of goopy piles of colourful latex and polyurethane foam poured onto the museum floor, embracing corners, or splayed as voluptuous waves hovering mid-air like chemical lava on the exhibition walls. Produced from vibrant, industrial materials – some even fluorescent, intended to glow in the darkened galleries, as seen in the documentary screened in the adjacent NO. 5 gallery – these foam pieces were not destined for long-term conservation and many were intentionally destroyed or deteriorated over time. Benglis introduced casts of selected pieces in monochrome metals – bronze, aluminium, lead – creating both documentary imprints and extending the body of work to new material qualities. The physical presence of the foam’s amorphous, performative shapes is subverted in the heavy, static metal that embodies a duality of unwieldy, precious permanence and an implicit molten state. The casts reflect Benglis’s rebuke of her male contemporaries and their sharp-edged, monolithic works, responding with oozing turds or bodily fluids, as in Eat Meat (1969–75) or Come (1969–74).

Departing from strategies of eccentric, vigorous expansion, the works by Baghramian, Balema, Grantina, Ruby and Upson flood, bulge, droop and melt. It is the constant shifts, abstract and political, that carry the works of Olga Balema (b.1984, Ukraine). Inside water-filled pouches iron spikes gradually rust over the course of the exhibition, turning them muddy and diffuse. Material states as well as national borders are anything but stable. In her triptych sculpture produced for this exhibition, Daiga Grantina (b.1985, Latvia) combines elastane’s exceptional elastic strength with coats of liquid plastic to create tense and frail forms that counter, bloat and stiffen the material’s industrial (body)shaping qualities. Inversions and animations of readily available domestic objects – such as trashcans and armchairs – are also at play in the objects of Kaari Upson (b.1972, USA). Pinned to the wall mid-action, these airbrushed figures suggest gateways or openings, not to a ‘beyond’ but to a paradoxical ‘inside’, the potent whole of the hole. Meanwhile Nairy Baghramian’s (b.1971, Iran) waxy, limb-looking stumps lean on their custom-built vitrine, itself a modernist dream of lines and planes. Materialised Freudian slips, these corporeal abstractions are inherently uncontainable whilst simultaneously revealing their reliance on the furniture of the museum. The brightly coloured and monstrously oversized candles by Sterling Ruby (b.1972, USA) lounge on the gallery floor. Disarmingly playful, with references from fashion to folksy, they pose questions about the supposedly softer side of gender- and material hierarchies. With vastly different, coagulated outcomes, this diverse range of works let their actions speak in and of materials. 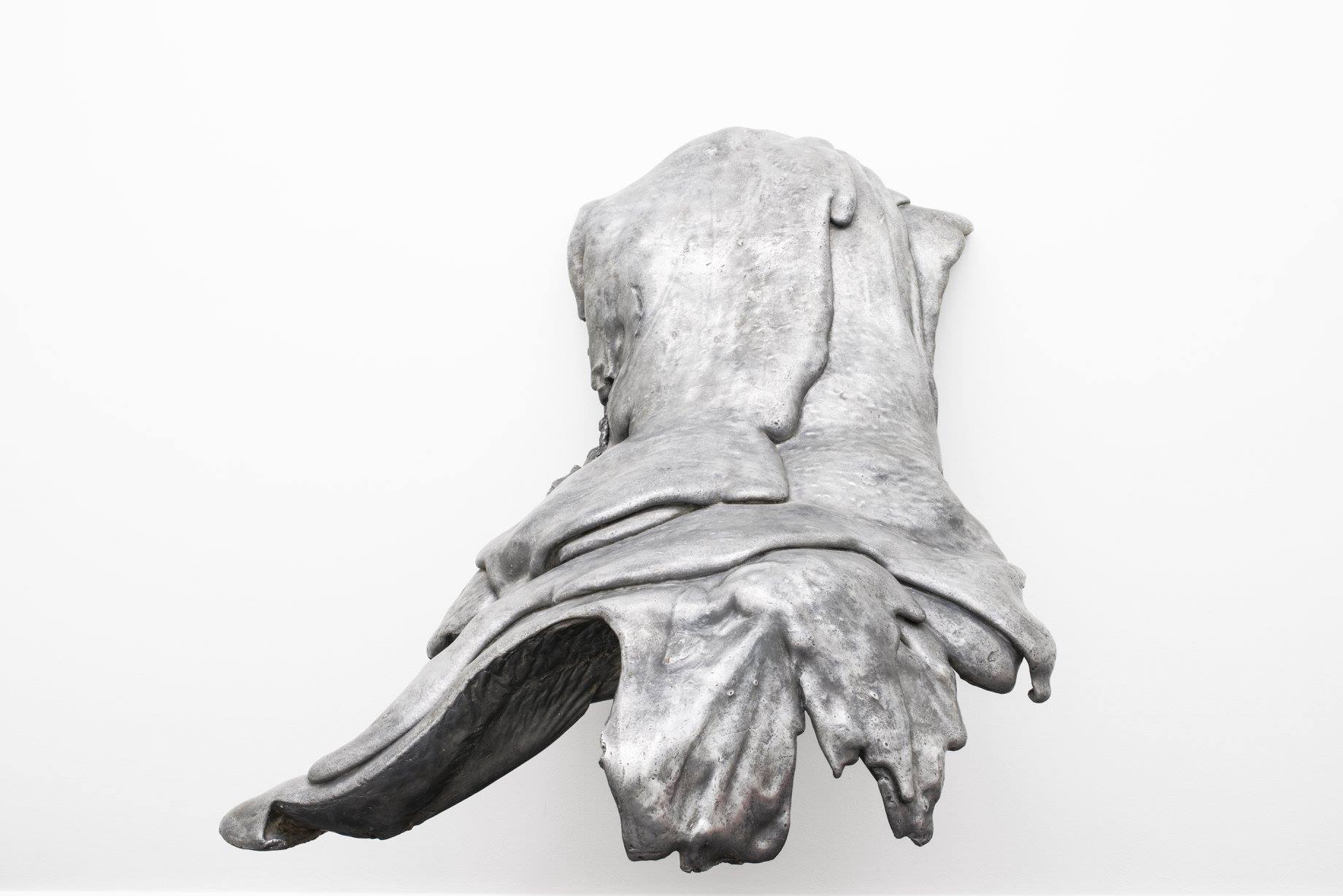 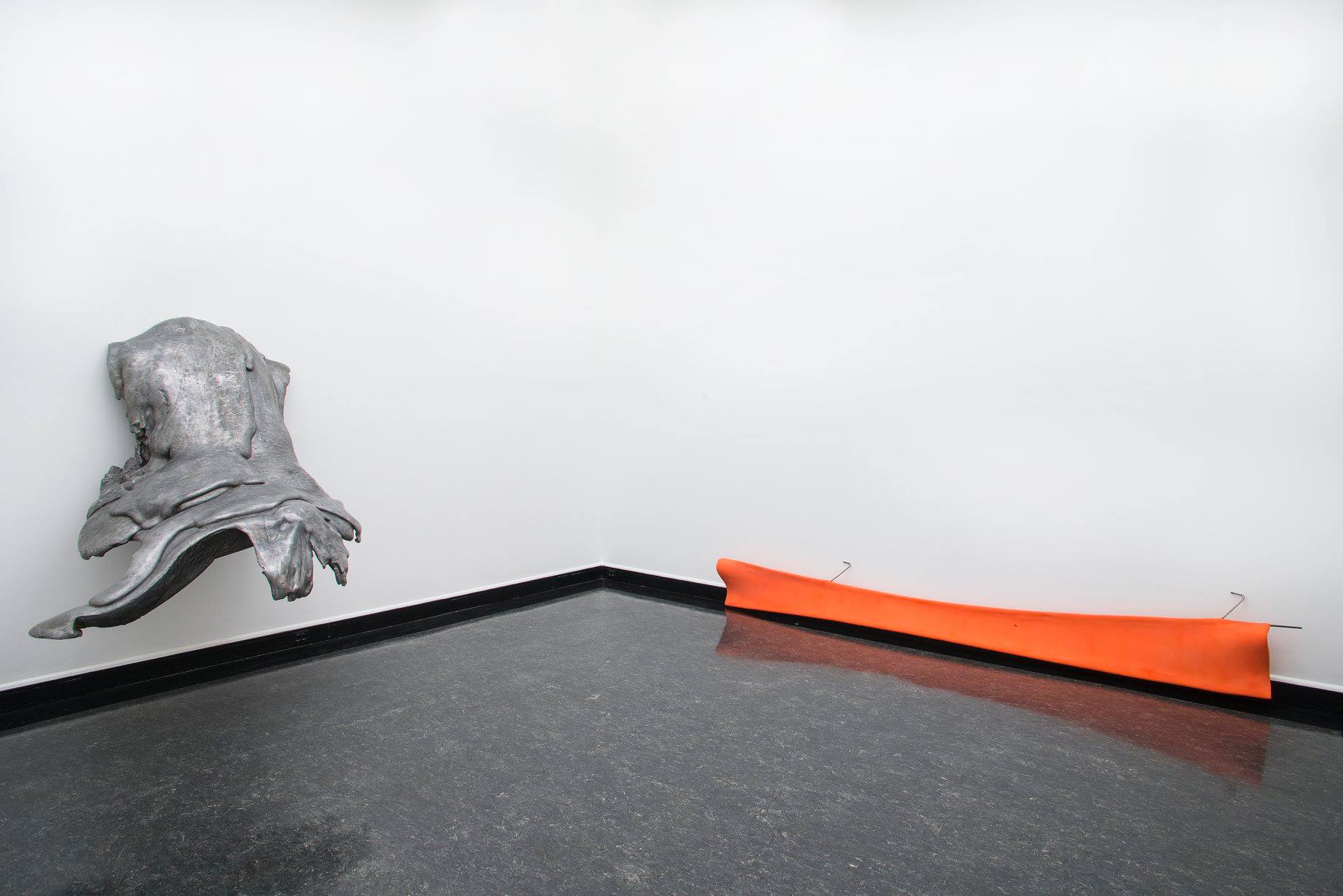 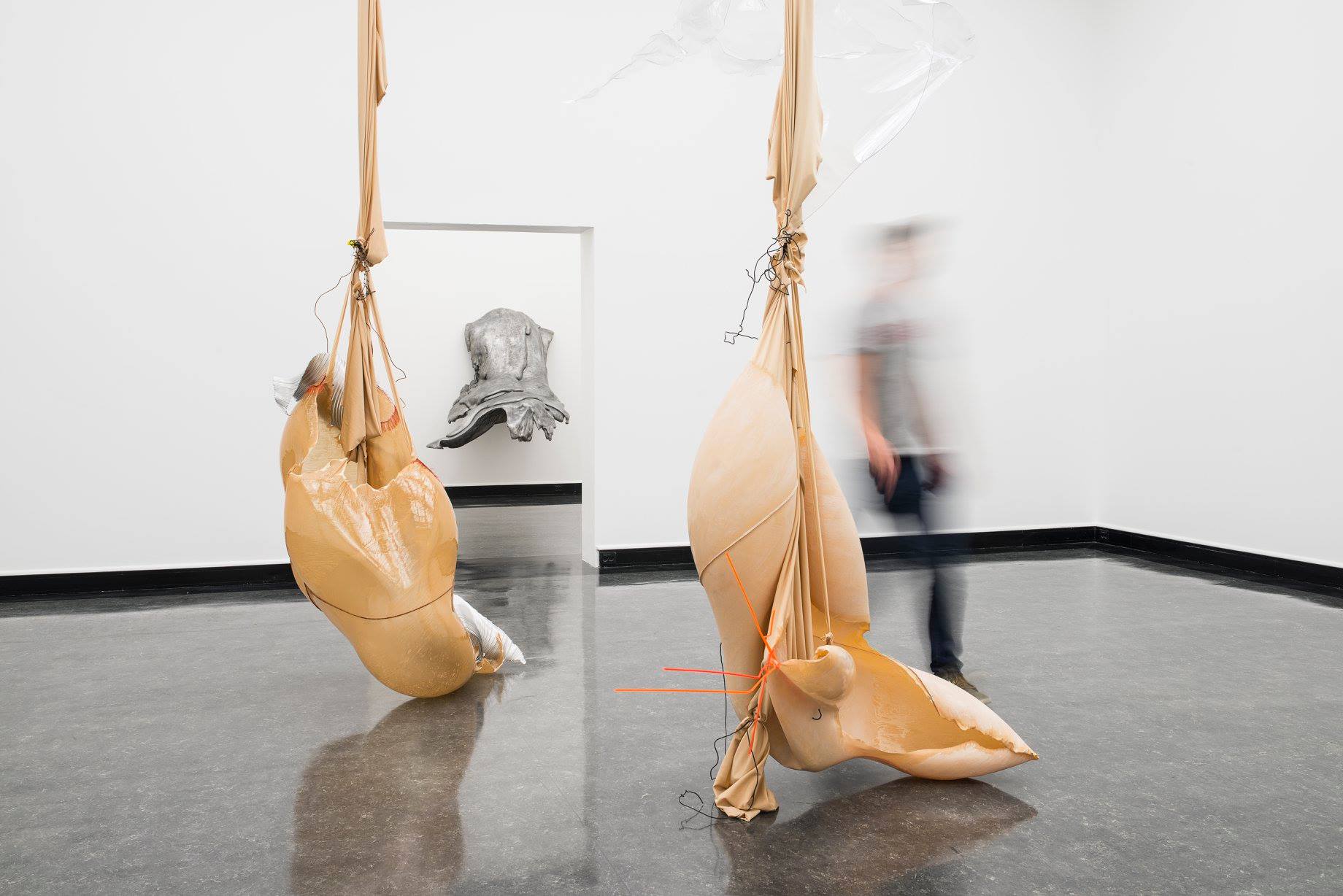 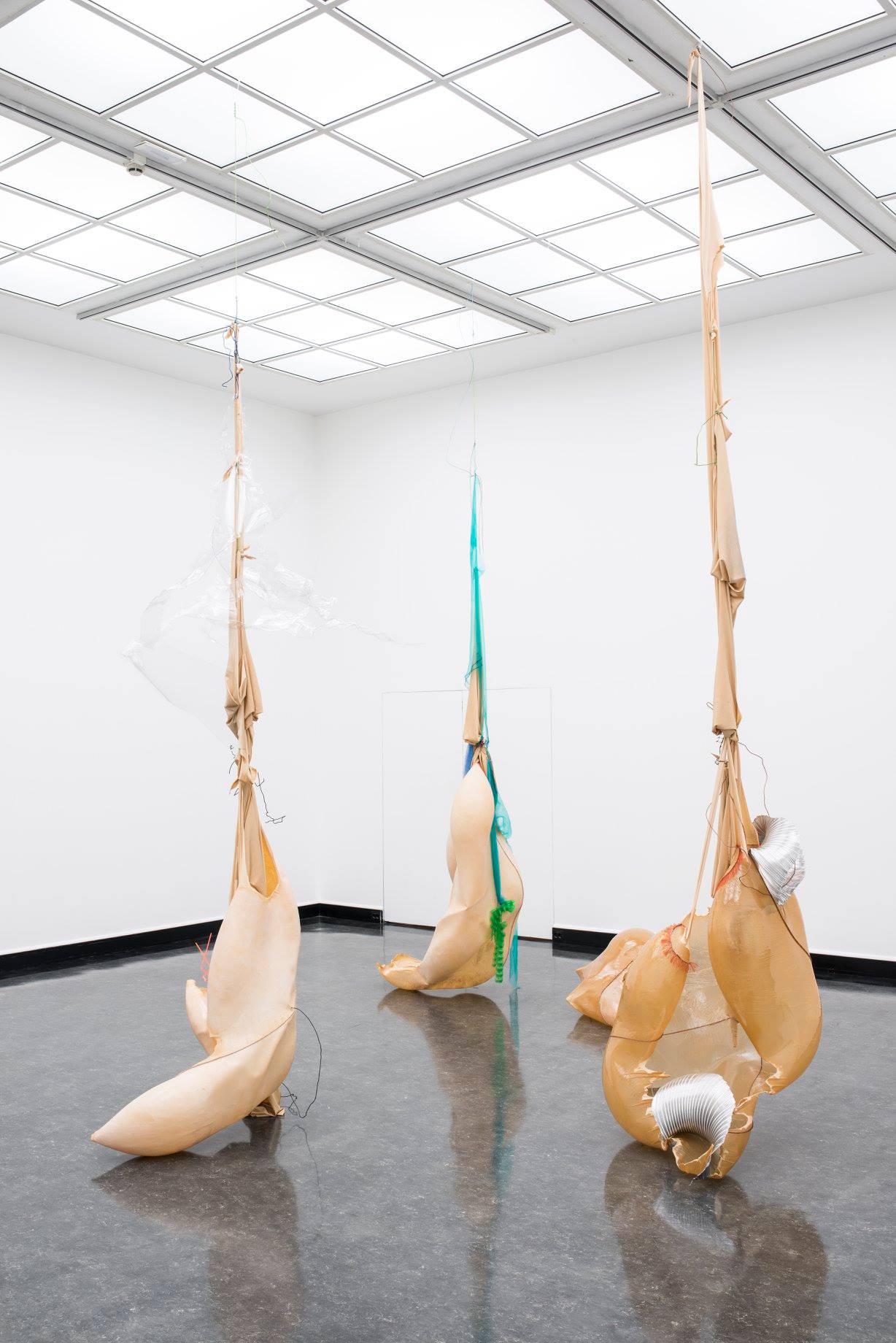 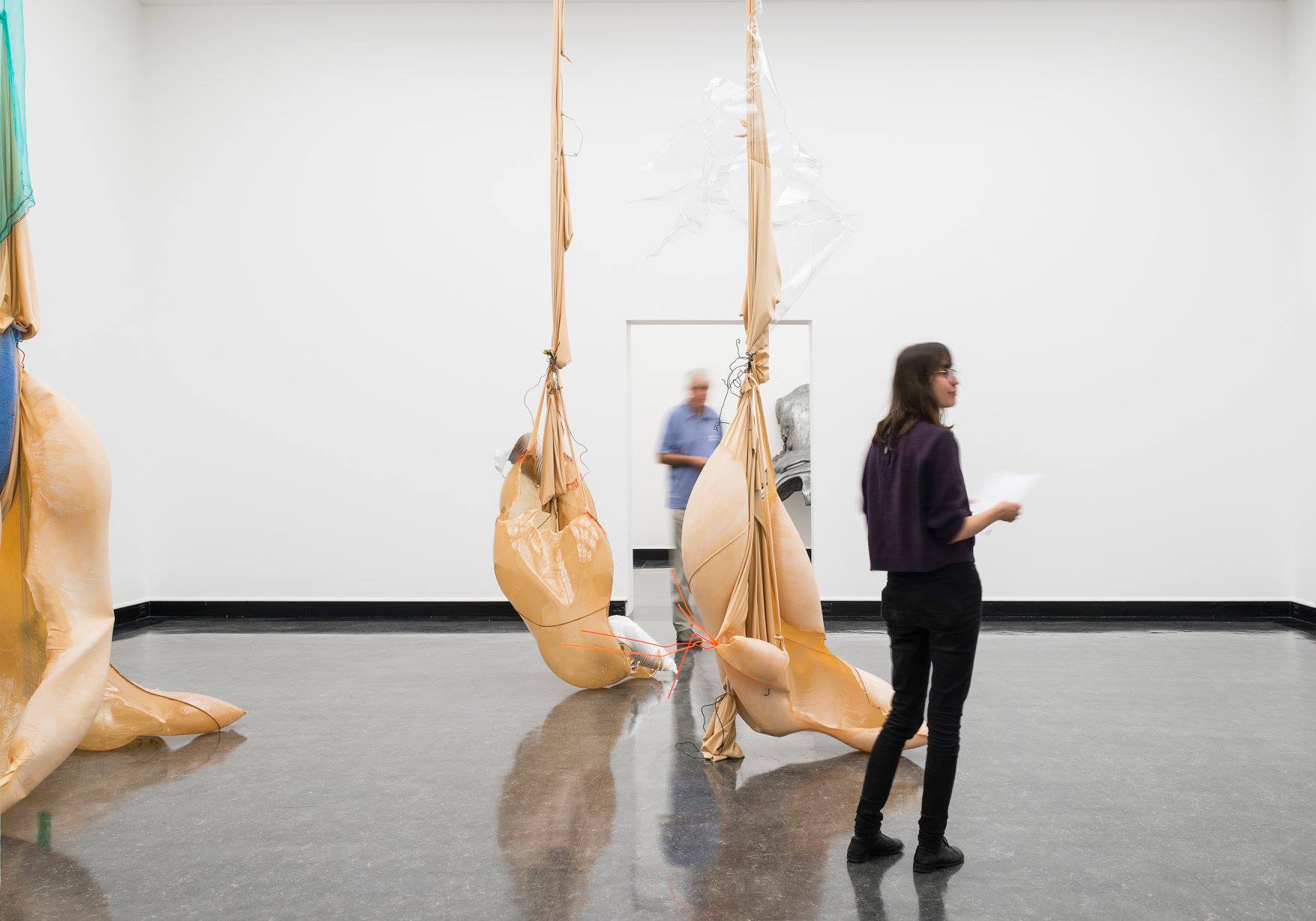 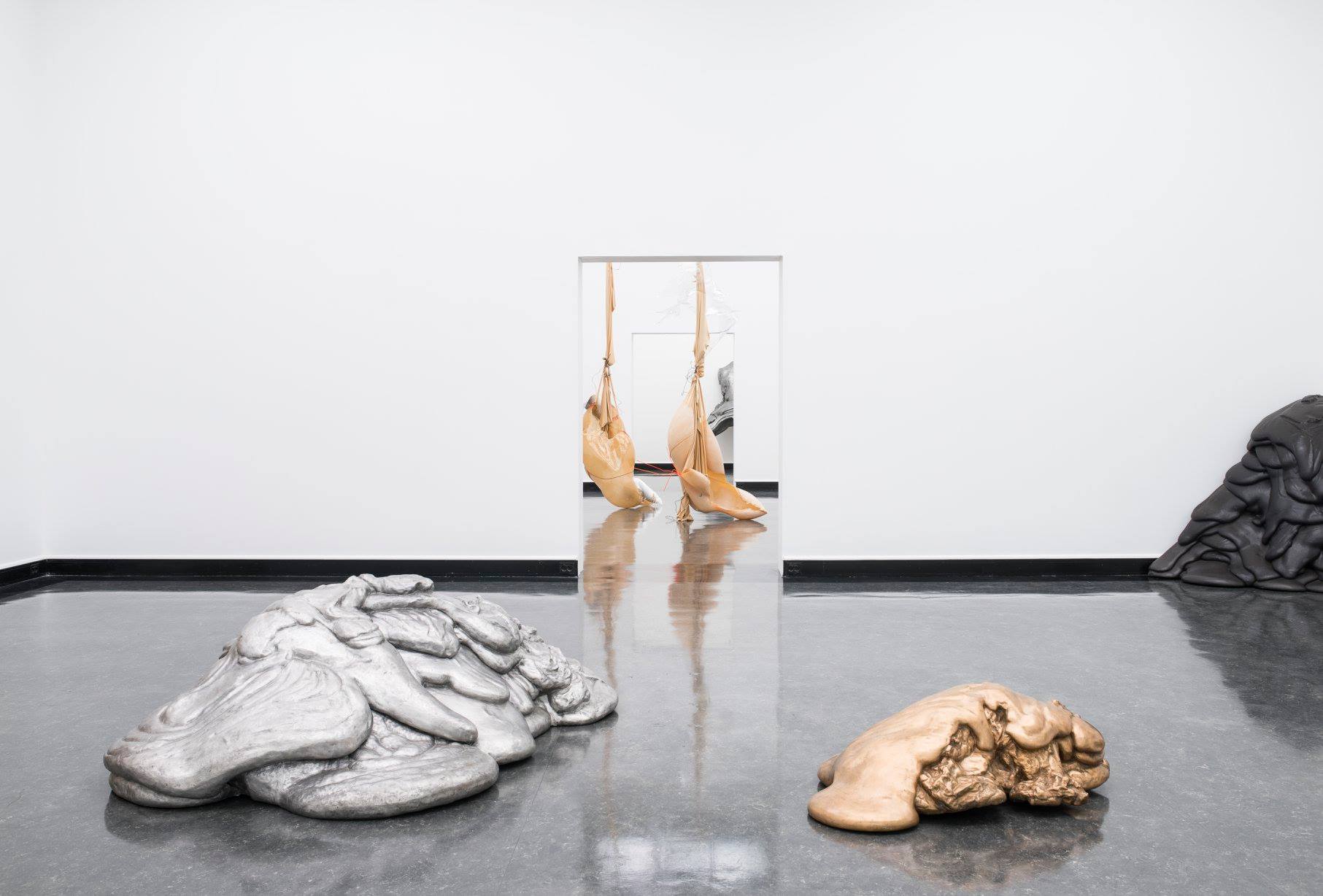 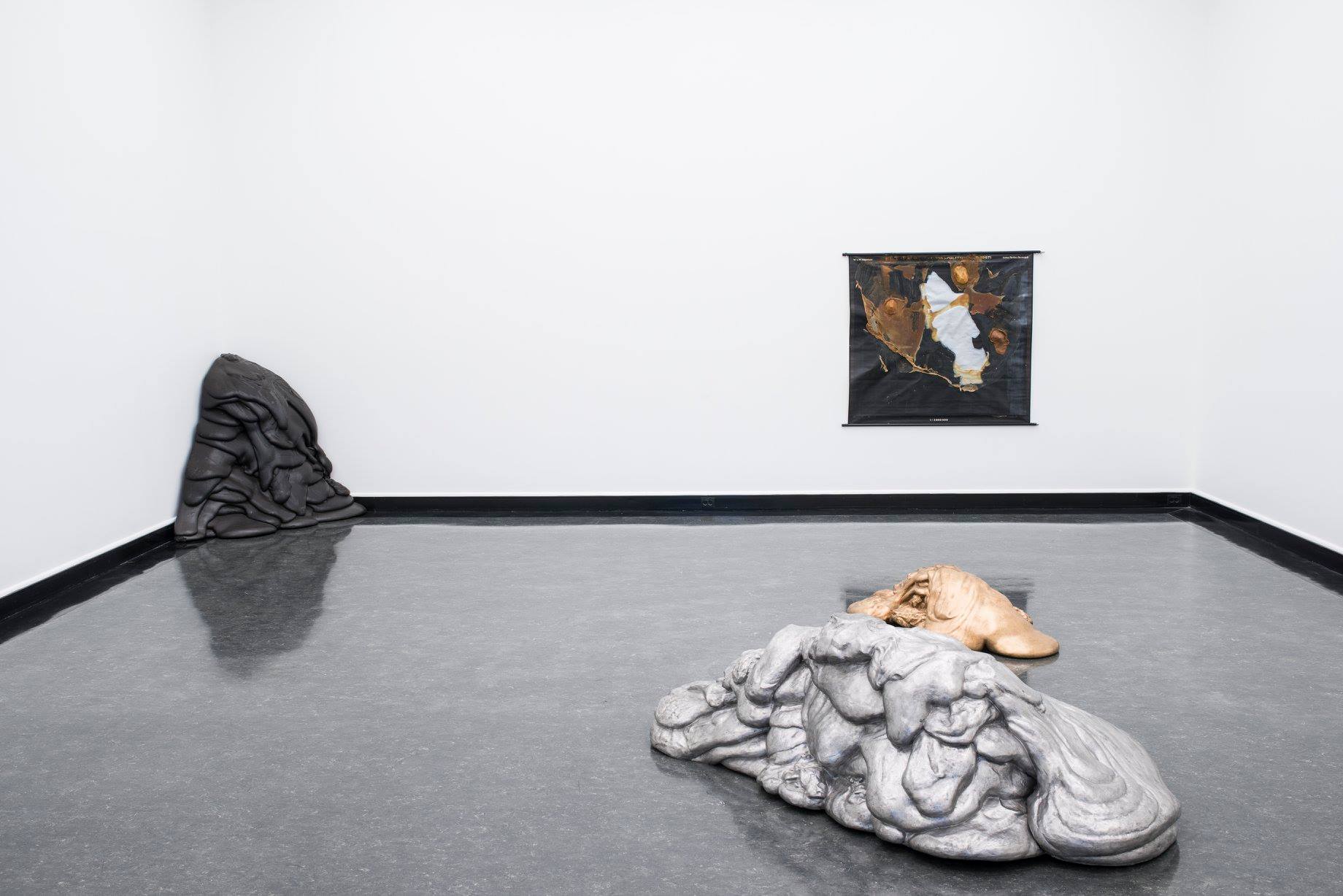 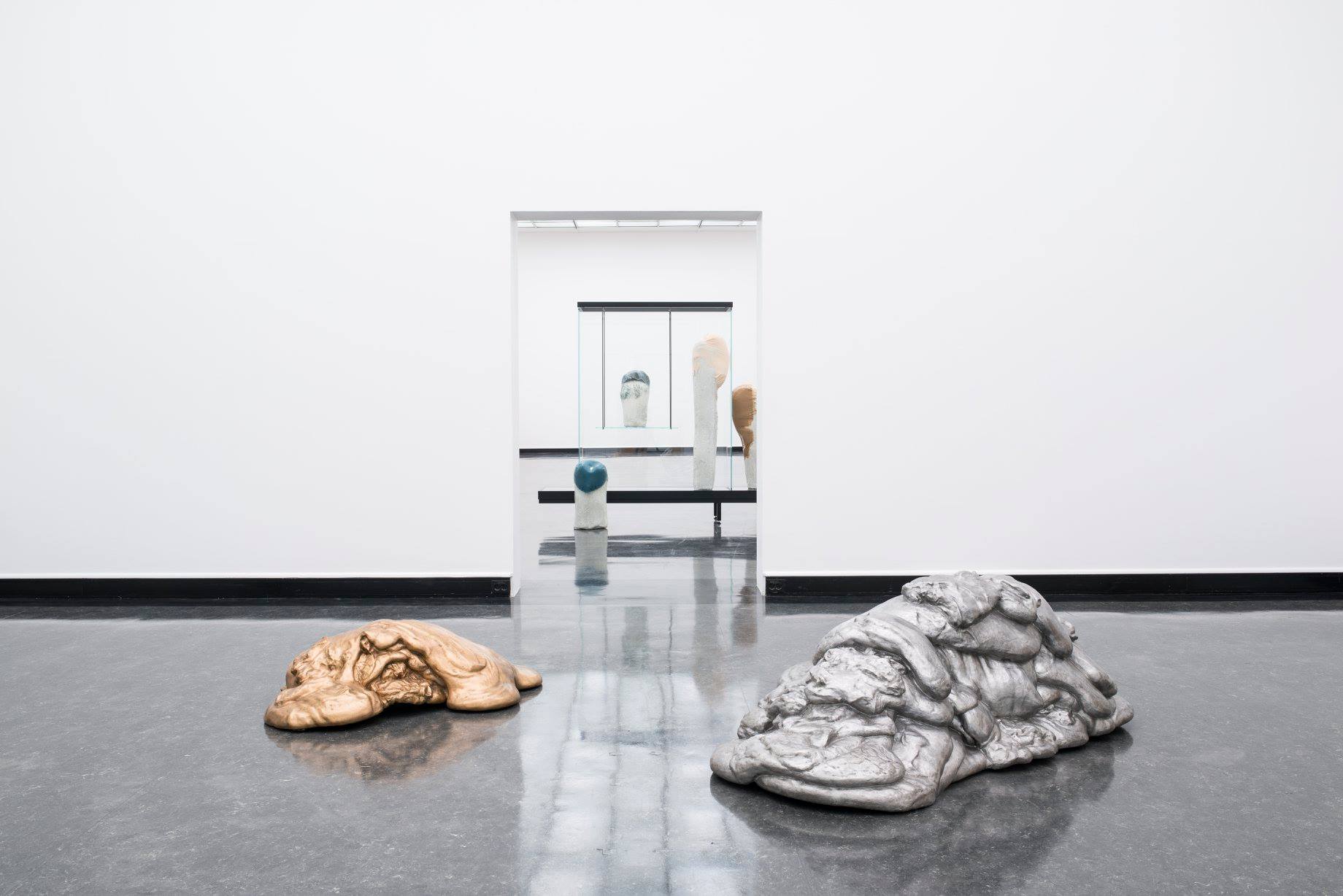 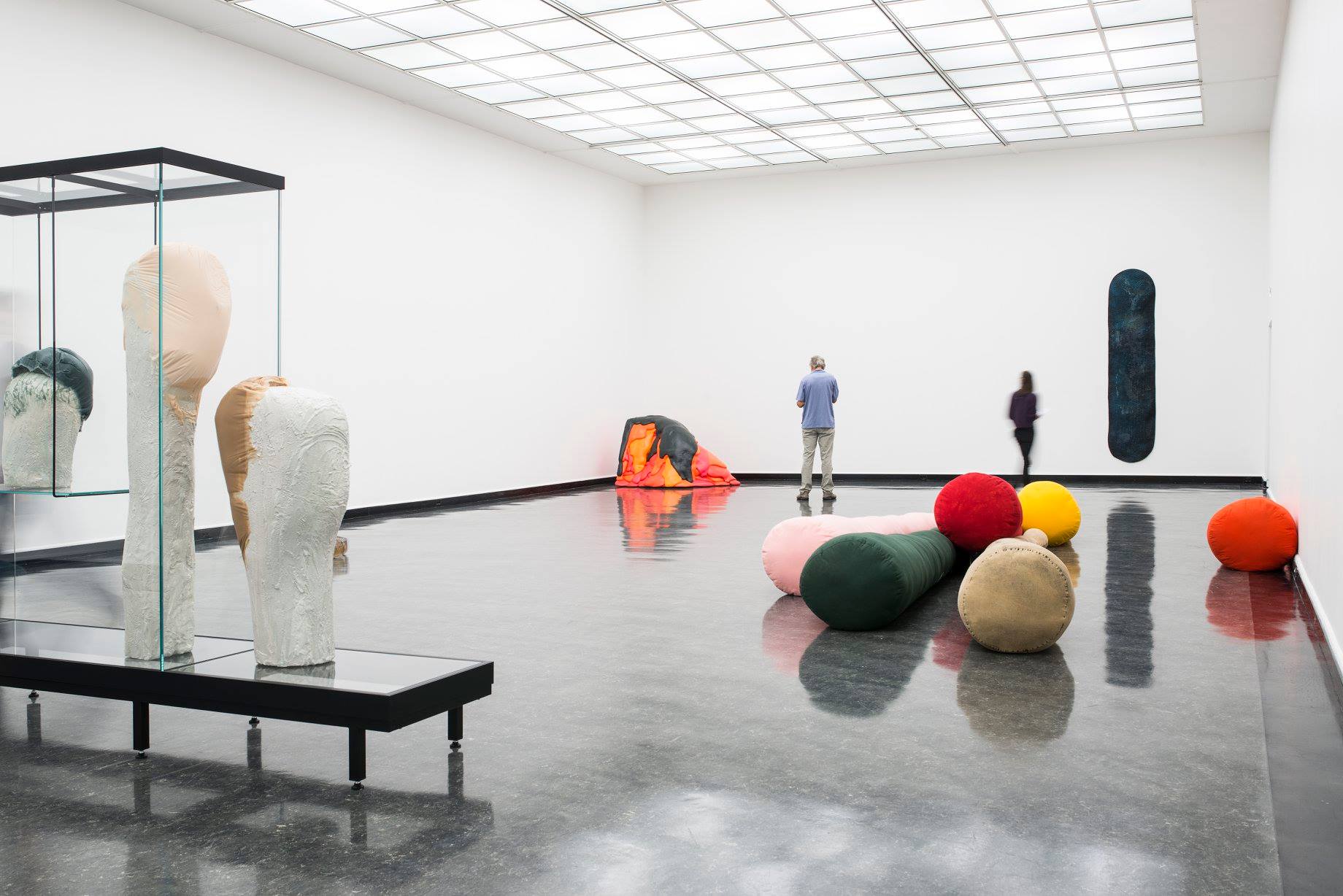 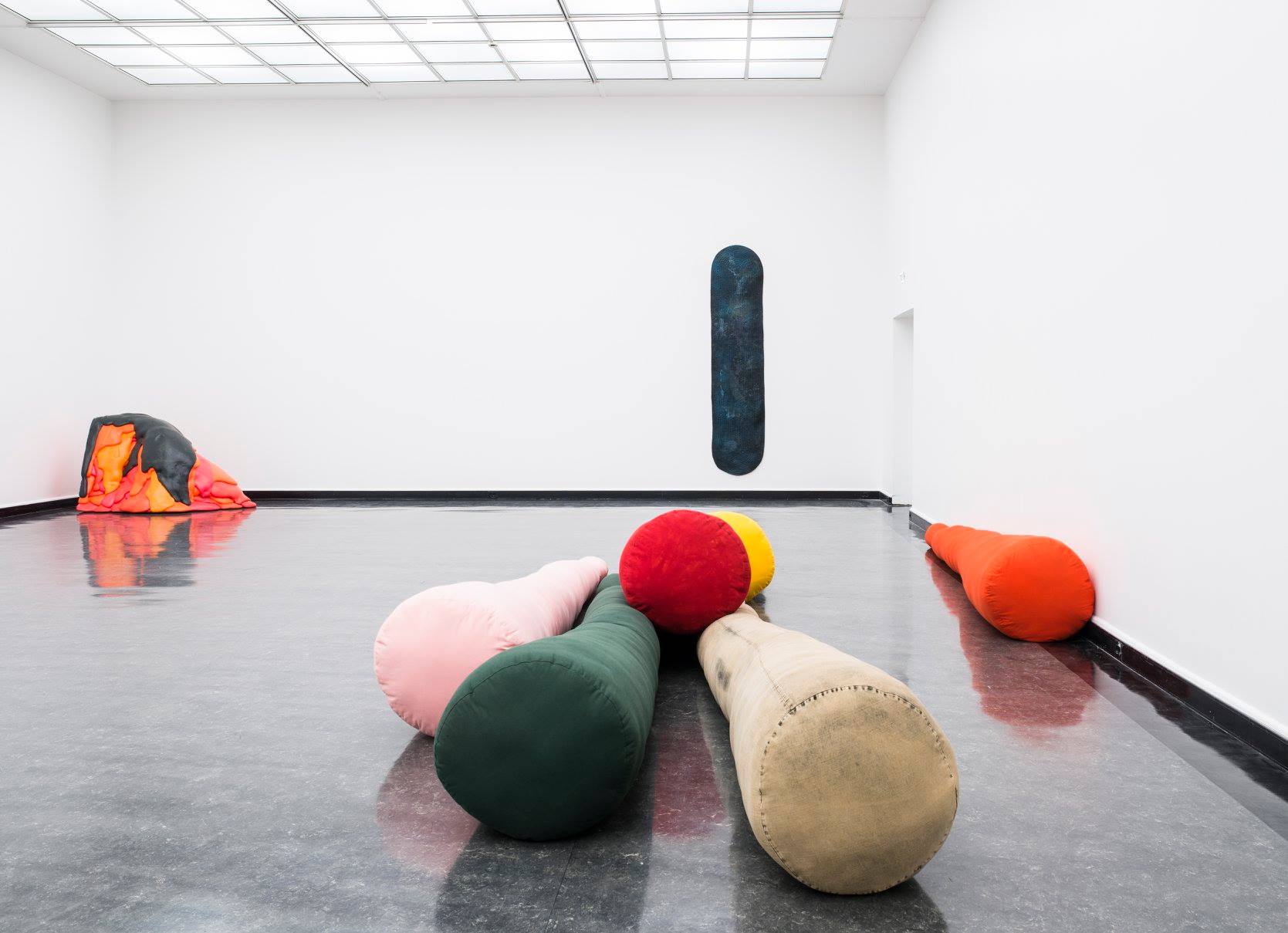 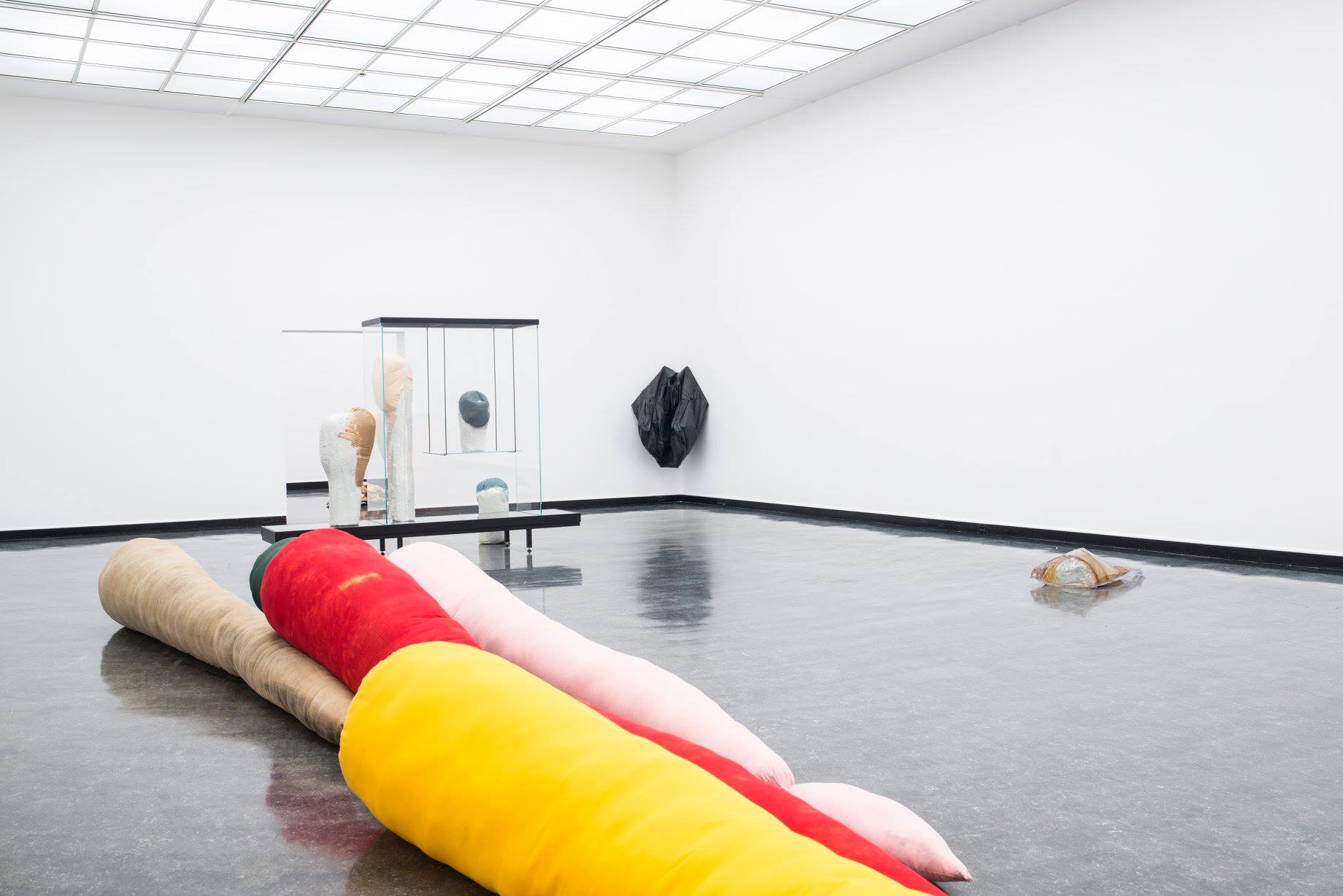 Courtesy of the artists, Bergen Kunsthall and Bergen Assembly