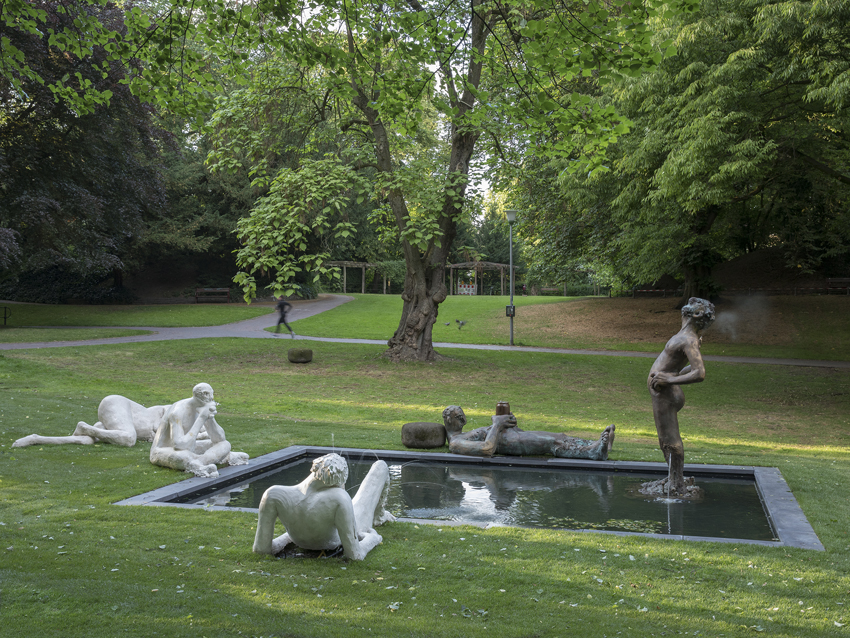 Nicole Eisenman – Sketch for a Fountain

After 40 years, 2017 sees the fifth edition of Skulptur Projekte Muenster. No other art happening has a similarly long interval – ten years – between each two editions. Muenster, the city hosting the Skulptur Projekte, is a typical example of German Ordnungspolitik – the country’s love for order and discipline. After the second world war, Muenster was conservatively rebuilt: everything had to look like before things were blown to bits. The city has no real working class and Catholicism still has a lot of influence.

The first edition of Skulptur Projekte in 1977 has its roots in a counter-reaction to this conservative policy. Two years before the first Skulptur Projekte, in 1975, a sculpture by George Rickey was erected in the city centre. Britta Peters, one of the three curators of this year’s edition, together with Kasper Konig, who initiated the project and Marianne Wagner, tells how there was a lot of commotion: “People didn’t understand the work of Rickey and maybe even felt insulted – they expected art to tell stories, be figurative and handmade. I think the most provocative thing about it was its abstract character. So when in 1977 the first SKM arrived, people reacted much in the same way. Letters to the editors from newspapers at the time are interesting to read! Most of the citizens felt messed around by the Skulptur Projekte”.

From the third edition in 1997 onwards, the negative feelings towards the Skulptur Projekte died down – as visitor numbers increased, so did income for many of the town’s business owners. This kind of cultural tourism often gets criticised because of the close ties it can have with city marketing. Skulptur Projekte Muenster does its best to honour its controversial roots by always returning to its basic incentive: defining the public space as a heterogeneous sphere that is indispensable for sociocultural co-existence. Economic interests should play no role in this process. Britta Peters: “What we tried to avoid is this consumeristic idea, because there is a lot of incentives to spend a really nice weekend biking and seeing art. That’s why I’m very happy there are lots of strong works that really have an impact in my opinion”.

Throughout the city, works from previous editions have remained. This is the Public Collection, an ensemble of works acquired by the city or private persons, and they propose a historical backdrop going back to the seventies for the contemporary works. 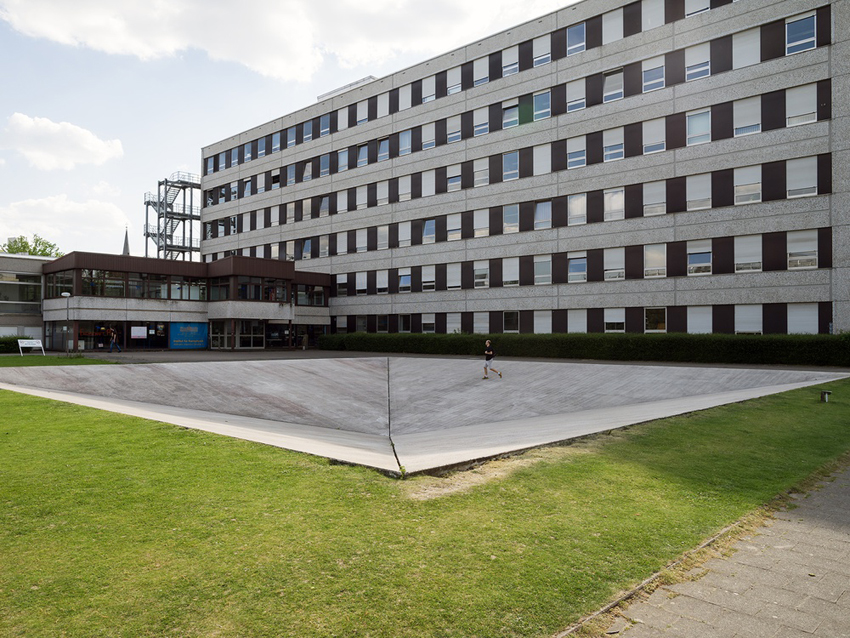 Bruce Nauman’s Square Depression from Skulptur Projekte’s first edition in 1977 was restored in 2007, so visitors today can still experience the contemplative action of walking down this inverted pyramid. Resonating under a bridge over the artificial lake of the Aasee is a sound work by Susan Philipsz in which two voices intertwine from opposite sides of the lake. In the park next to the lake, an iconic Donald Judd looms imposingly but was deemed to irresistible not to climb. Dan Graham’s octagonal mirror pavilion continues this lesson in art history, together with an installation by Rebecca Horn and a wonderful example of Arte Povera by Giovanni Anselmo. Matt Mullican’s ground sculpture proves a bit harder to find, on the grounds of the university’s Department of Natural Sciences. Mullican’s contemporary hieroglyphs allude to the subject of the research going on in the buildings around the work. 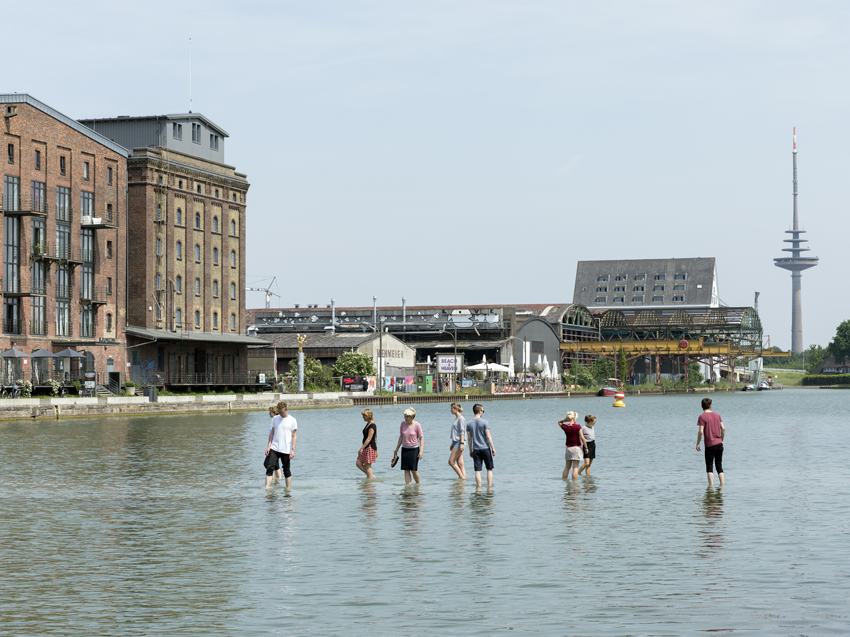 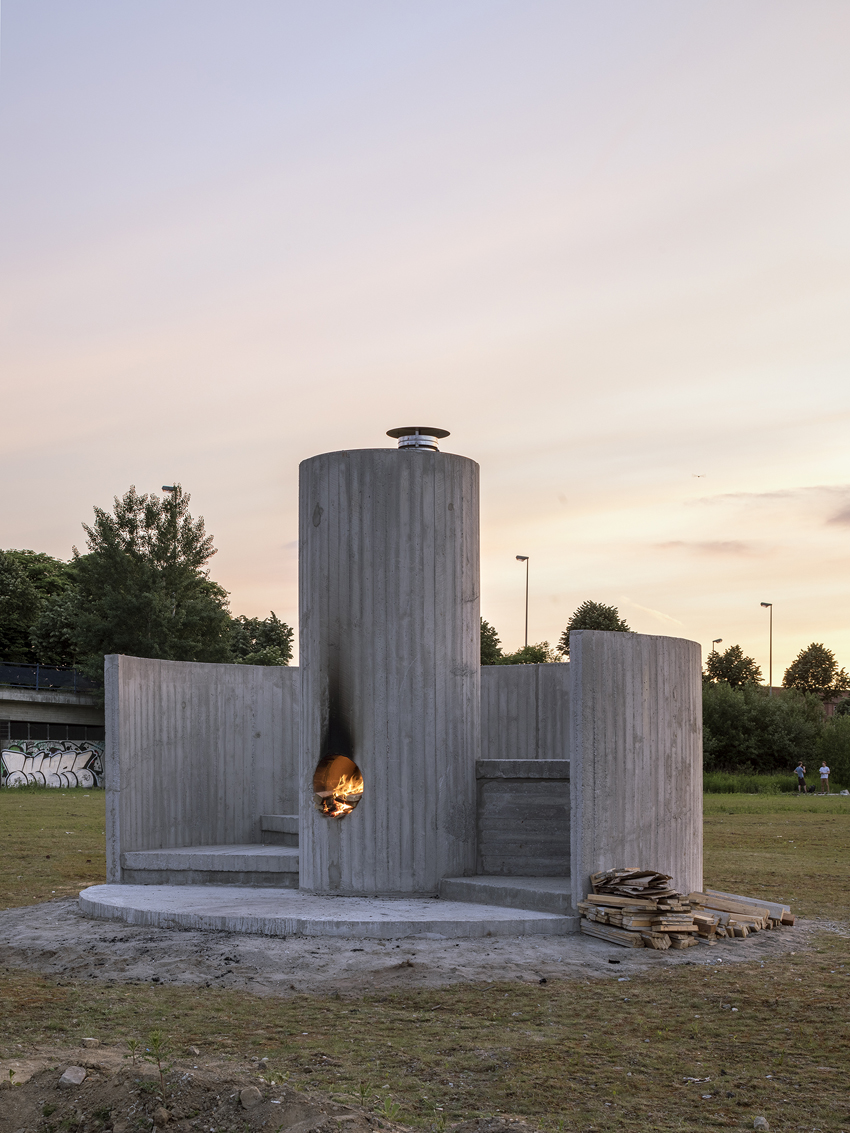 Amongst the new works from this year’s edition, are quite a few works inviting the visitor to experience them – reminding us that visual art can be so much more than something to look at from a distance. Ayşe Erkmen built a walkway just underneath the water surface of the Muenster canal. This beautiful continuation of almost 2000 years of Western history offers everybody the opportunity to walk on water, thereby closing the distance between the northern bank, which is bustling with restaurants and cafés, and the southern bank, which is industrial and bears witness to the activities of the harbour of Muenster. Wander even further around the industrial zone and you’ll find Oscar Tuazon’s work, which hovers between public fireplace and look-out tower. The fire in the heart of the work warms the entire structure and is kept going by the wood used in the construction of the piece. This work, which invokes humanity’s age-old praxis of gathering around a fire, is especially well-placed in this wasteland of industrial debris, used by many different people. 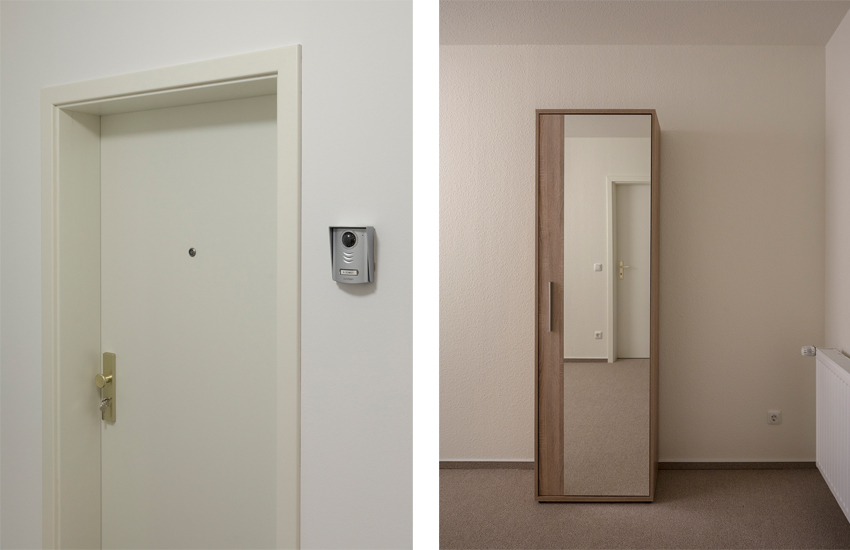 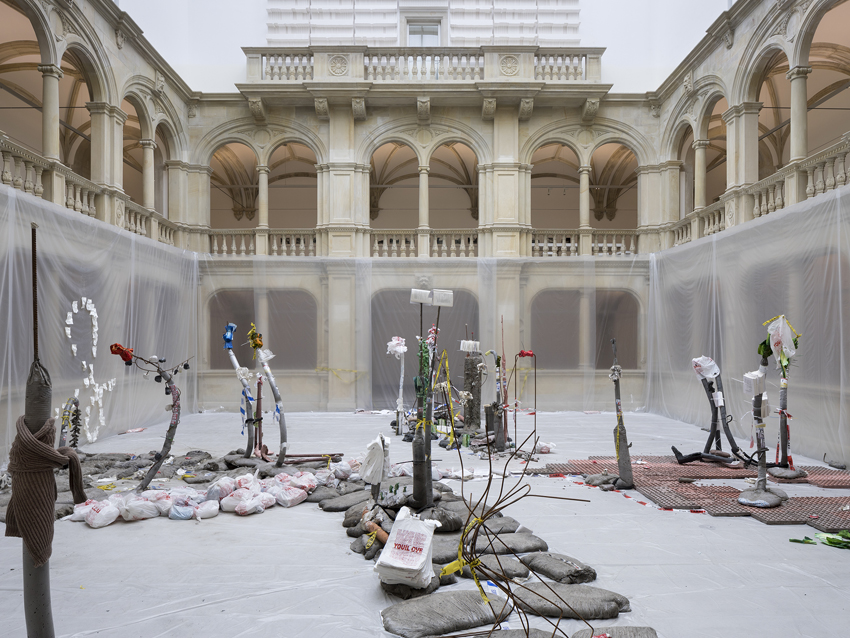 In the city centre, the Westphalian State Museum of Art and Cultural History hosts two worthwhile additions. German artist Gregor Schneider installed a veritable house of wonders with his apartment of N. Schmidt, a fictional character who made earlier appearances in his work as the inhabitant of an apartment with an unsettling layout. 2016 Turner Prize nominee Michael Dean takes over the atrium of the museum. He draped semi-transparent plastic sheets around the square space, creating a room within a room. Using peepholes, visitors can look at the sculptures inside the room. To enter the atrium, you have to take a walk around the historic halls. Michael Dean used materials from the streets, like rubbish, plastic, and concrete, to create an installation around an abstract semiotic system. 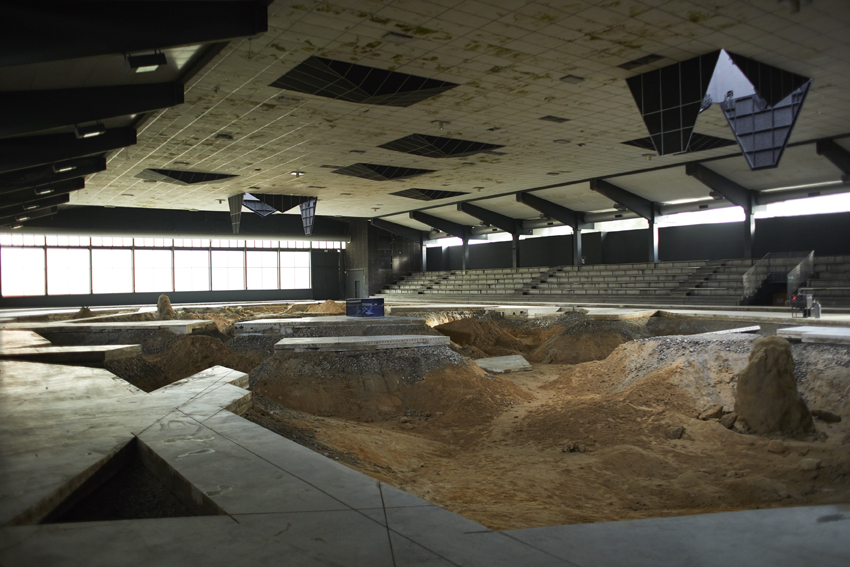 Pierre Huyghe – After Alife Ahead

One of the more impressing works is Pierre Huyghe’s transformation of a closed down ice rink into an eco-system complete with archaeological layers, peacocks, and beehives. The processes in the entire space changes are interdependent and some of them are determined by the division of cancerous cells which are stored in a black box in the periphery of the room. For example, the cells’ growth inspires the formation of augmented reality shapes, which visitors can see by downloading an app developed by the artist. 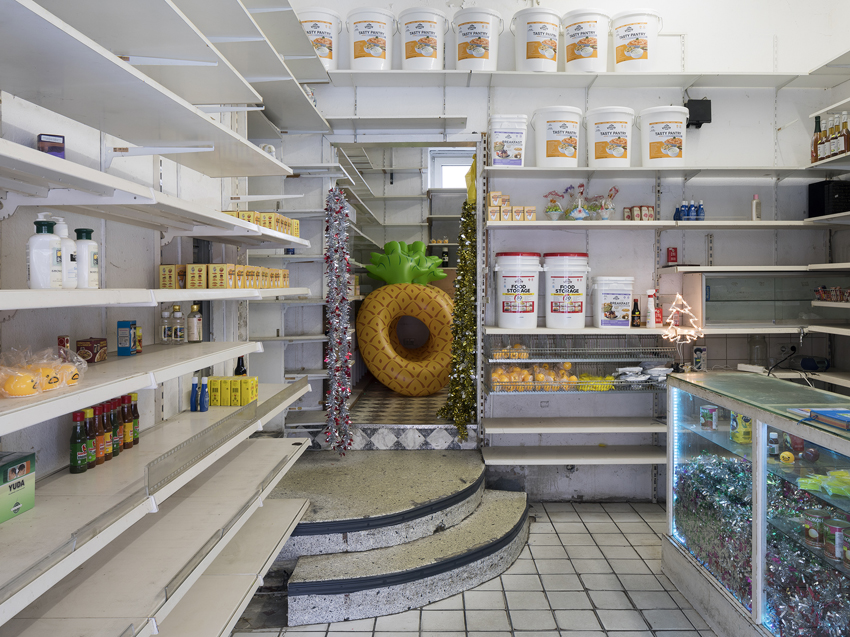 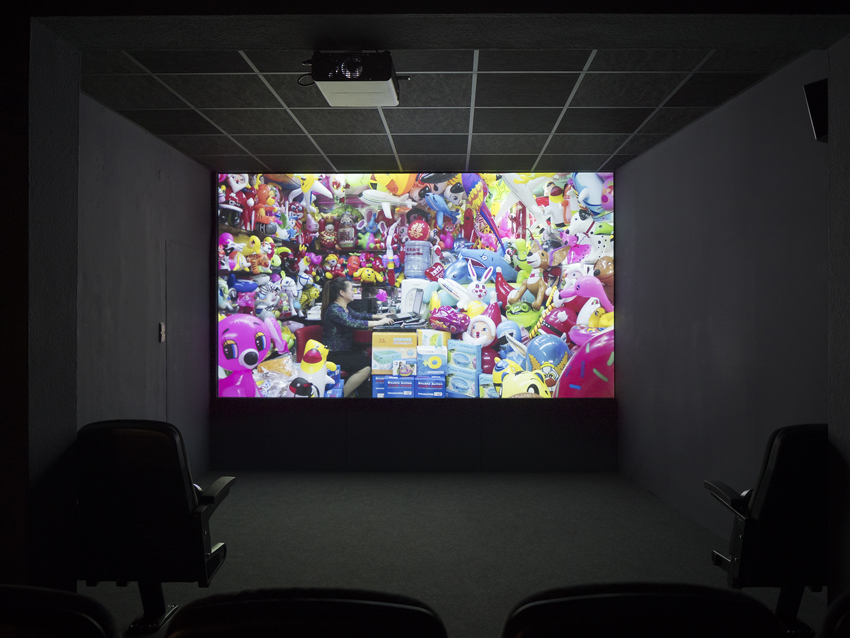 In a former Asian Supermarket, with some of the usual plastic paraphernalia still on the shelves, Mika Rottenberg presents her new film. The plastic objects, as well as the entire shop, are part of the work; together with the film, they form an allegory for the living and working conditions within our global society. This film is based on the rumour that there is a tunnel establishing a trading connection between the cities Calexico (in California) and Mexicalo (in Mexico). 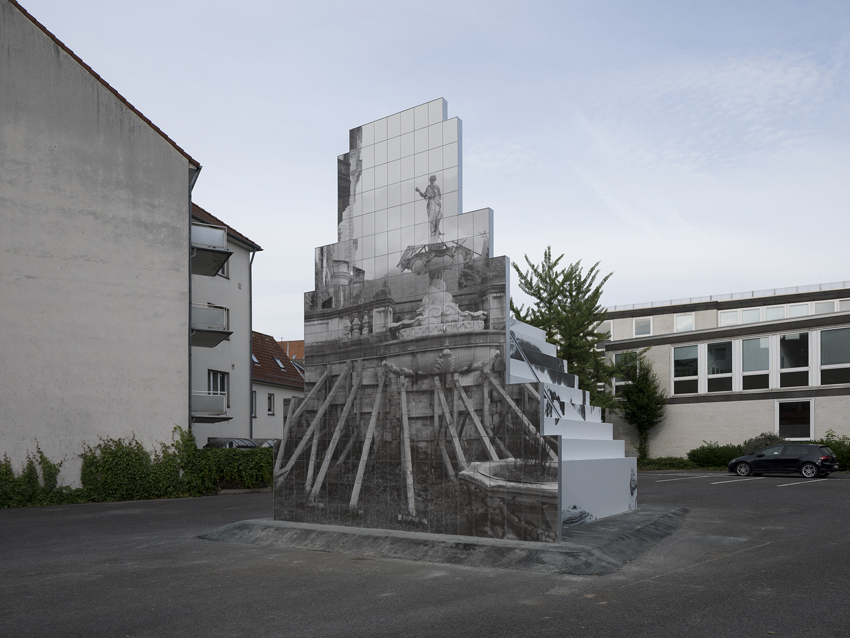 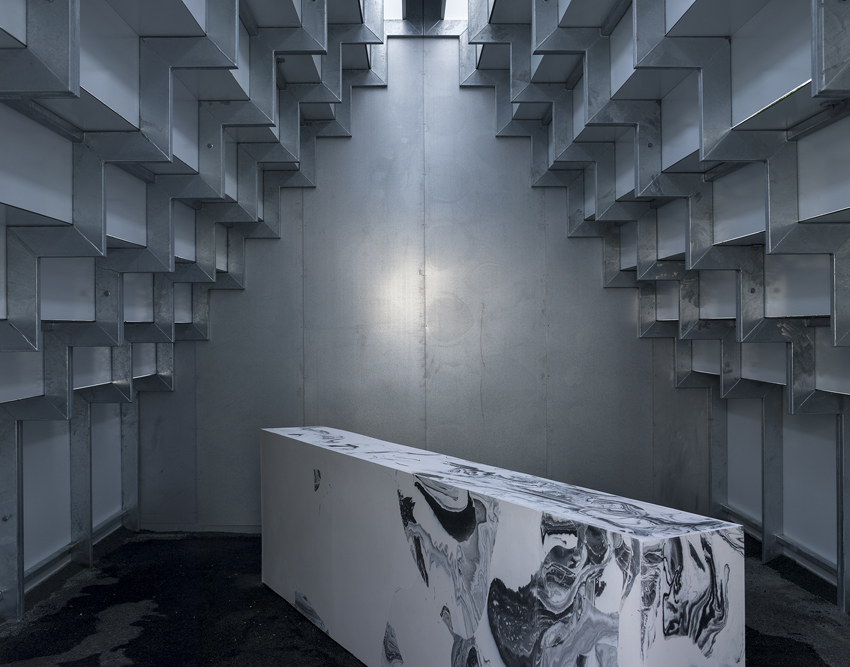 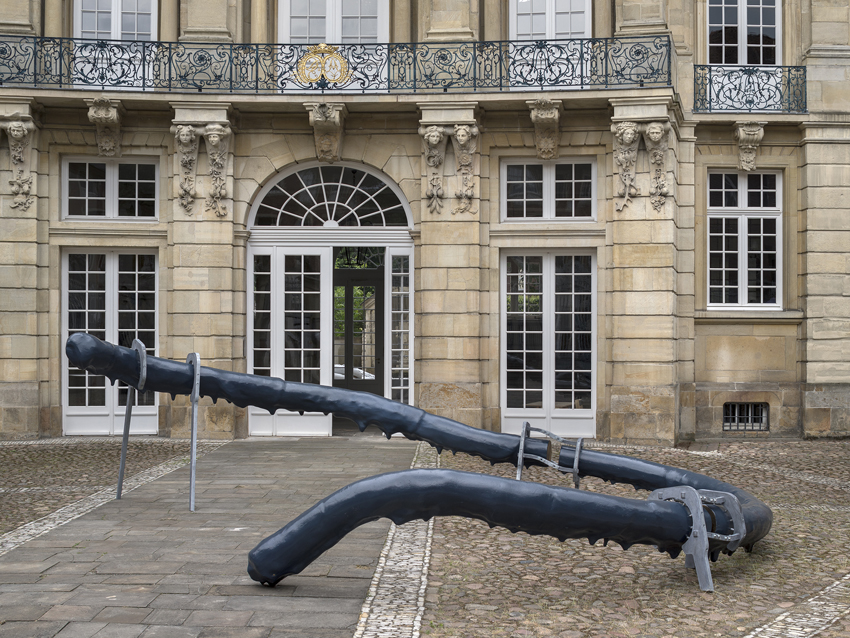 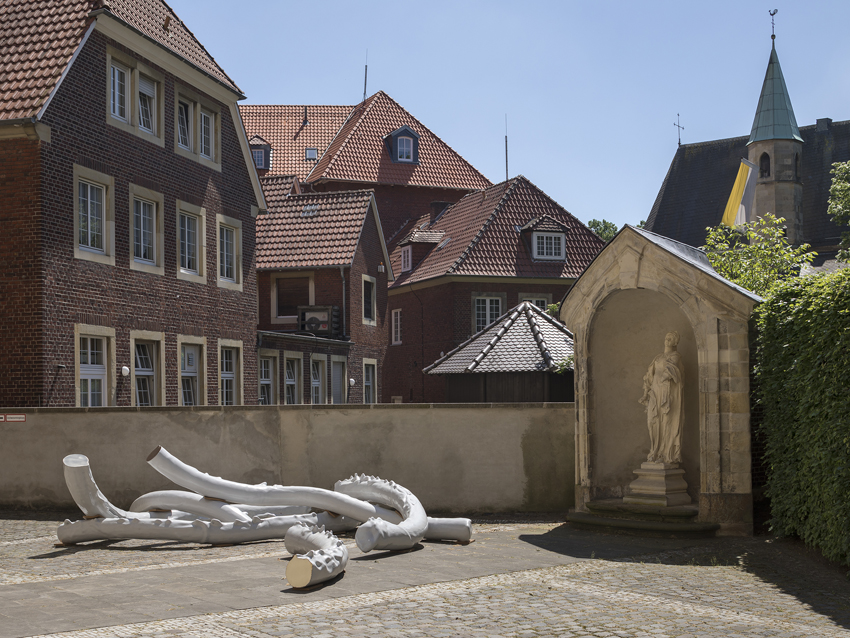 Other works worth exploring are Nicole Eisenman’s Sketch for a Fountain on the Promenade, Peles Empire’s gable-structure of 8 metres high on the car park in the centre of Munster and Nairy Baghramian’s corporeal sculptures close to a baroque building in the centre. 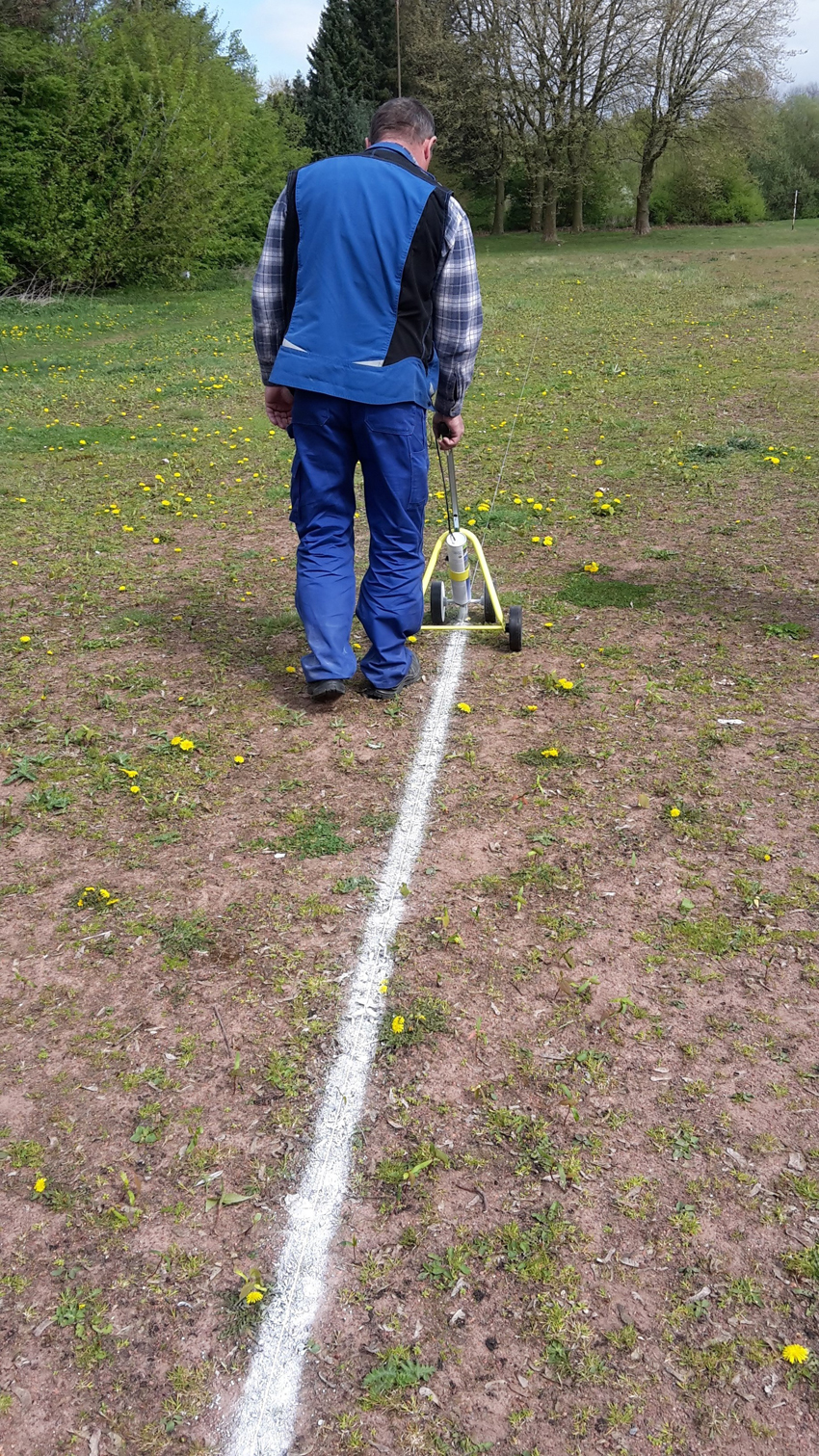 In the nearby village of Marl, Joelle Tuerlinck drew a 200-metre line in chalk through the Sculpture Park. Every morning at 10 AM, the line is drawn again. When the exhibition is over, the line will disappear. With this ephemeral work, Tuerlinck evokes the Land Art movement and asks questions about the experience of time and the traces 20th-century life leaves behind.

The works from Skulptur Projekte are located within a 5 km radius from Muenster’s centre. A bike, which can easily be reserved online, is the best way of getting around. Don’t forget to bring an umbrella and with the abolition of international roaming costs, there is no reason to worry about excessive charges to consult Google Maps. Skulptur Projekte runs until October 1st. 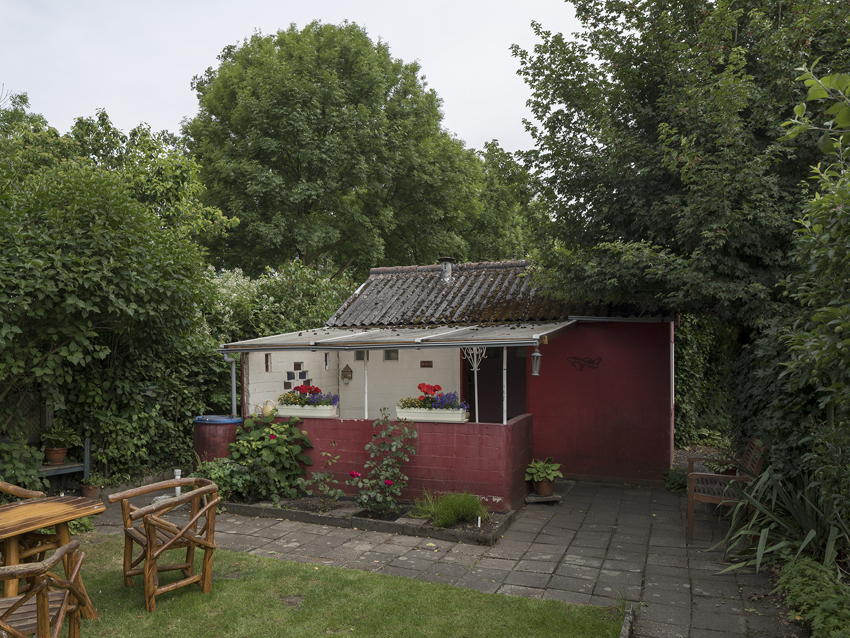 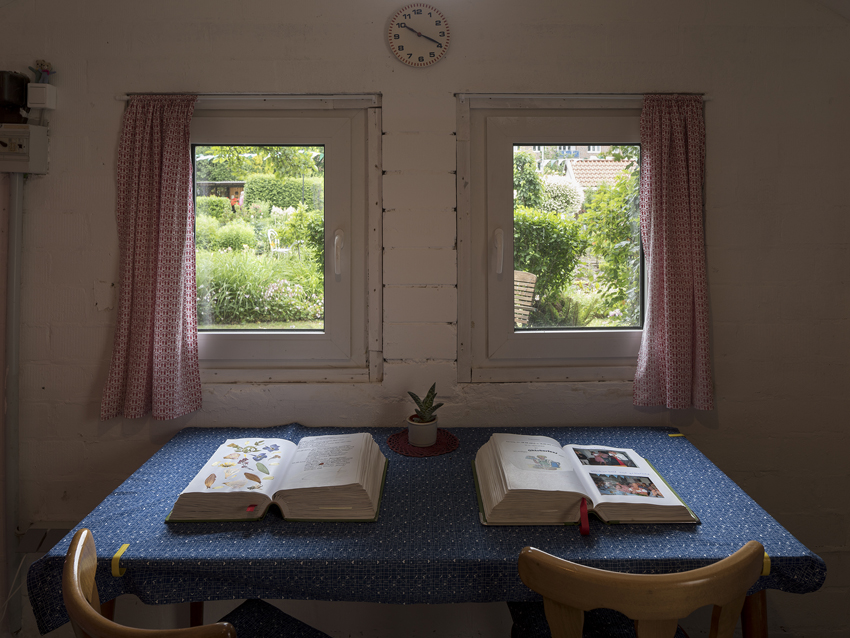 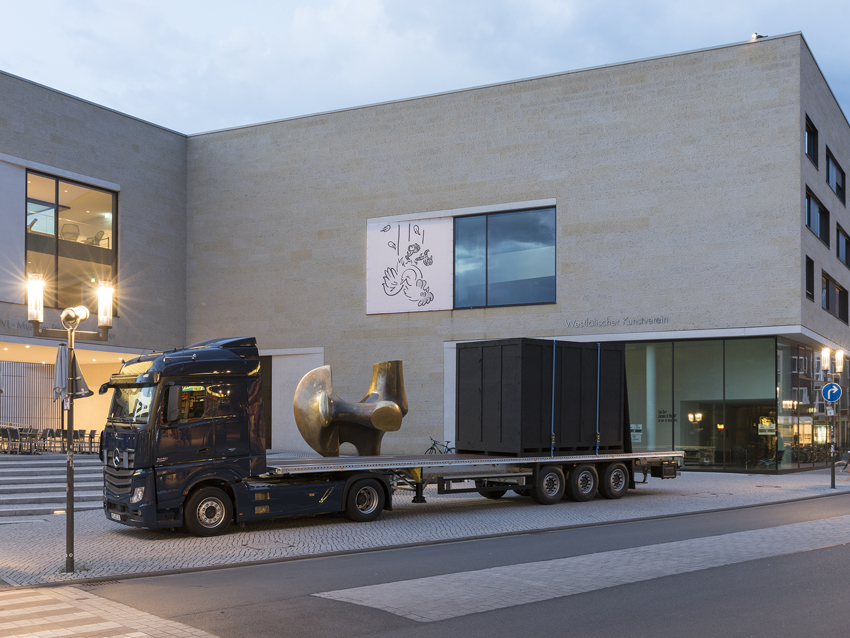 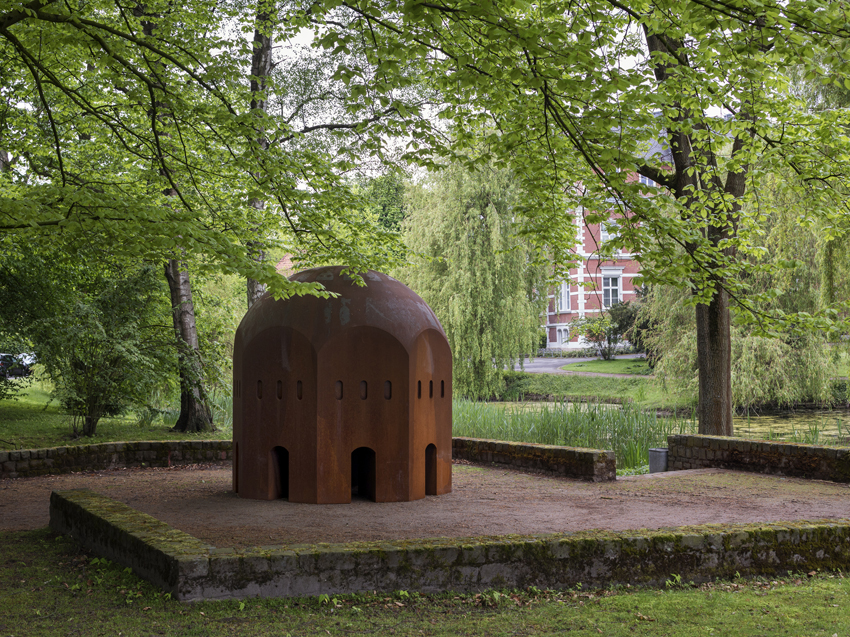 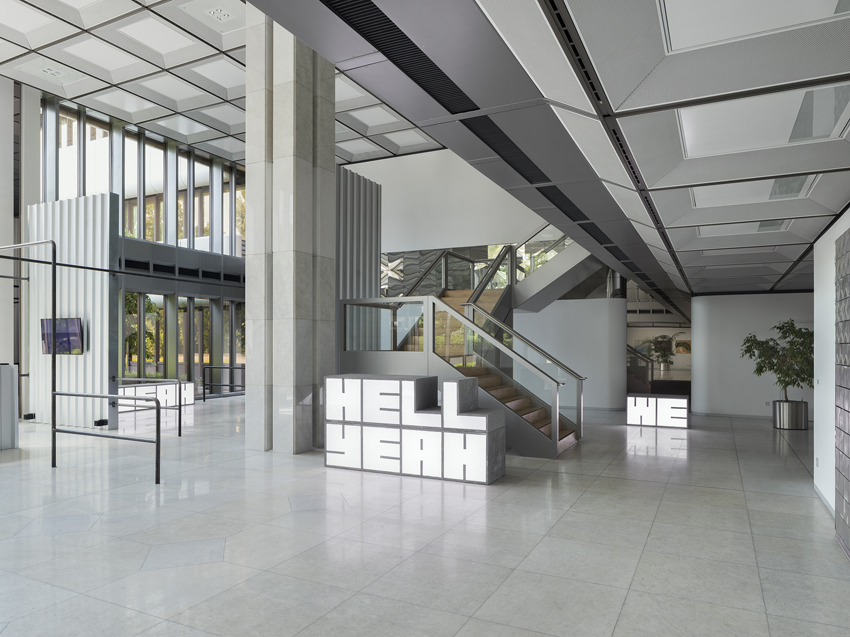 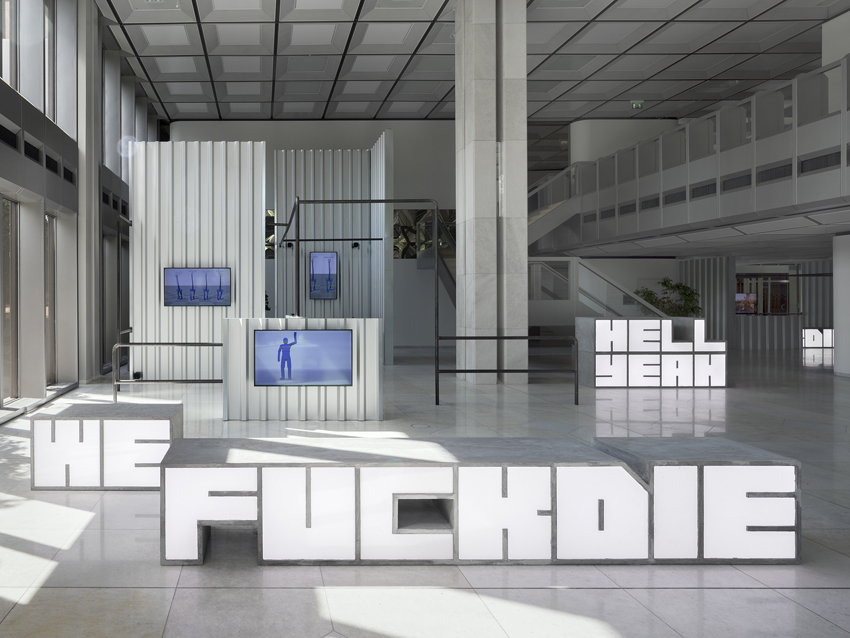 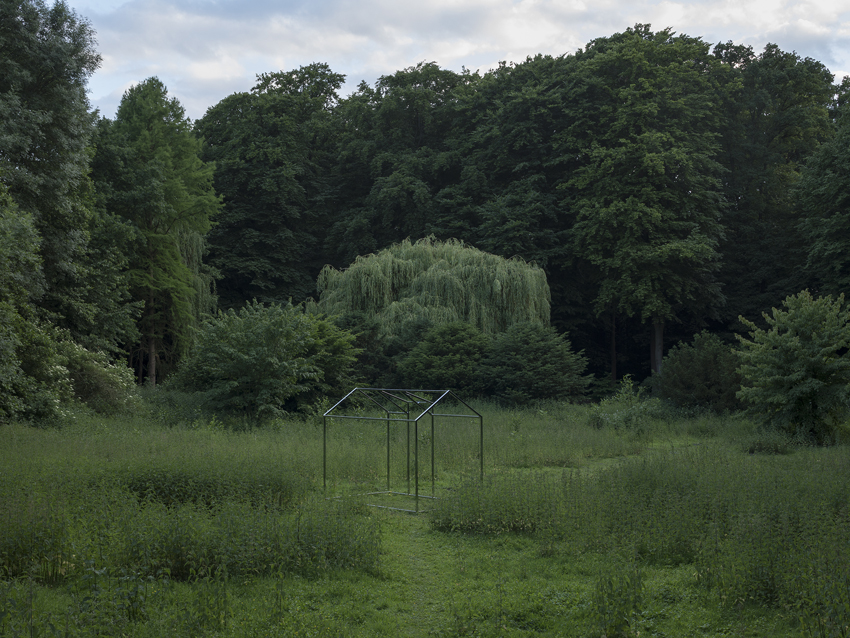 Hreinn Fridfinnsson – fourth house of the house project since 1974

All images courtesy of the artists and Skulptur Projekte Muenster