Nairy Baghramian’s Déformation Professionelle is an exhibition of new sculptures inspired by her own artistic practice from 1999 to 2016. In her words, she is “surveying the survey”. Where Baghramian normally creates exhibitions comprising sculpture and site-responsive installations that use, dismantle and unveil the human body and its gestures, in Déformation Professionelle, she has used her oeuvre-so-far as material. Some works incorporate rejected ideas and other working material. Other works show potential variations in form. There also is a playful engagement with language and meanings tend to shift continuously.

The title of the exhibition is a French term often translated as ‘professional deformation’ or ‘job conditioning’, the distortion of someone’s worldview by their professional over-specialisation. But the word ‘deformation’ can also be applied to form and relates to the basic actions involved in sculpture as a plastic activity: shaping, modelling and casting. Baghramian questions the sculptor’s craft, but also the role of visitors, curators, authors, production managers etc.

According to Nairy Baghramian, an artwork is autonomous, but always has time-based, social and spatial connections: references to art history, its relation to the artist, to its viewers, and to  the space where it is exhibited. Peeper is stretched between the museum walls. Following on from the ‘institutional critique’ common in the 1960s and 1970s, Baghramian raises questions about the role of the museum, and the factors that affect art and help determine its value and perception. The balancing act between ‘putting pressure on something’ and ‘supporting’ is comparable to the interaction between artists and institutions such as museums and galleries. Where the artwork stresses the surrounding space, the title underlines the presence and the gaze of the viewer. This recalls Minimal Art’s attempt to redefine the work of art in relation to these factors. Peeper however cordons off the central room of this exhibition transversely, limiting and stretching the viewer’s spatial and visual engagement with the work.

We can also recognise the supporting role of museums and their unwritten rules in Baghramian’s use of prostheses and aids used in sculptural practice. The form of Flat Spine is reminiscent of a mould for the sculpture French Curve (2014) that looks like a backbone, the structure of vertebrae that supports and holds our bodies upright from the inside out.
Many of the works in this exhibition have a strong physical appearance. They combine abstraction with anthropomorphic features. Sometimes Baghramian works on proportions and volume, at other times on the tactile membranous surfaces that resemble the texture of our
skin. Out of such related notions as transparency, structure, fabric and porosity, Baghramian also builds up associations to form a reflection on our society and its power relations.

In the same room we encounter the photographic series Portrait (The Concept-Artist Smoking Head). Baghramian often contrasts the body and its activities with the head, addressing, yet undermining, clichés such as making vs. thinking. She sometimes plays humorously with the dominant role of the idea in conceptual art, showing the process of thought as smoke emerging from a chimney as if it were an almost mechanical activity.

Stay Downers is a group of sculptures spread over several exhibition rooms. These works, most of them in modelling foam, are reminiscent of prototypes and summon up fundamental sculptural questions regarding volume, mass and gravity, but also about colour and composition. The works play with an affected lightness: their soft, cloud-like forms conceal
the heavy weight they bear and the almost carnivalesque balancing act they partly perform. The titles (eg. Dripper, Babbler, Wallflower, Grubby Urchin) also have a comical slant which is, however, hard to reconcile with the social character the work evokes.

The ensemble shows those who had to do a year over again, the group left over from the original sculpture, Class Reunion (2008). Stay Downers raises questions of social acceptance and through direct visual references to modern art (e.g. the abstract figures in paintings by Yves Tanguy and the
formal idiom of Isamo Noguchi) links them with the ‘exclusive’ nature of the art world.

The series called  Moorings, comprising sturdy metal hooks whose form was inspired by the crane hooks with which dockworkers unload container ships, is to be seen on the wall of the double-height passageway near the landing. These hooks have a mechanical, technical appearance that is softened by their curves, which bring the organic language of artists such as Henry Moore and Barbara Hepworth to mind, artists whose work complies with the modernist model of the autonomous artwork.

Baghramian however presents her works in a way that emphasises the context – the architecture of the museum – from which we can then no longer visually separate them. Several times, she has sought out the peripheral spaces in the museum and from this space, a landing, this becomes clear. The Moorings are placed on the outside wall of the central and largest room, but remain invisible from this room itself. In a similar way, the work Headgear encircles the space above the reception desk like a clamp. In its turn, Big Valves reverses our spatial perception and emphasises alternative passages in the museum space like a signage
system for visitors. In their form they evoke heart valves, which regulate the flow of blood through our bodies.

It can be said that Baghramian approaches the museum as a skeletal structure on which she then mounts body parts. The fragmented body, the cohesion between the parts and the whole, which are in principle alien to each other, are able to act as a striking image of our society: the
constant switching from tangible to immaterial reality, from physical to virtual, continuously approaches our perceptive limits and makes us drift apart. 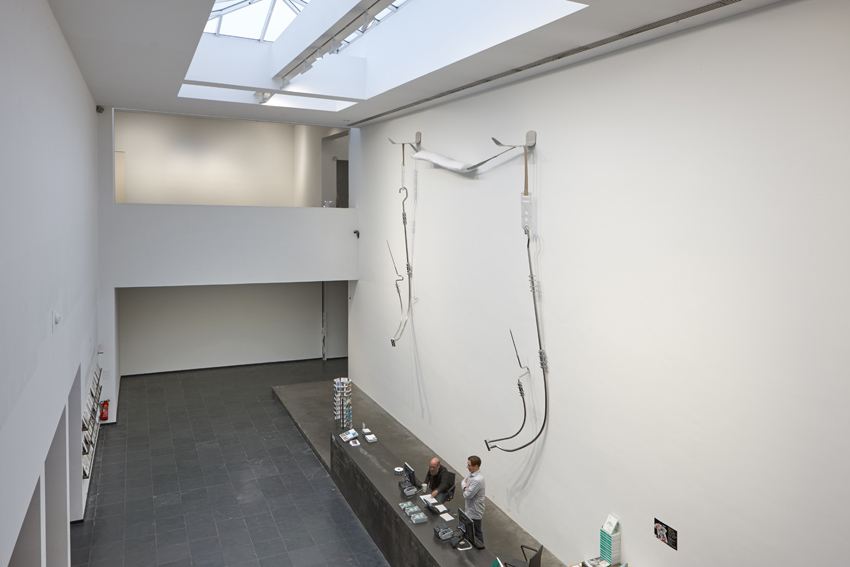 Headgear combines soft materials such as textiles and belts with hard ones such as aluminium. The work represents an external brace with which orthodontists – as if they were sculptors – perfect the form of a set of teeth as depicted in Baghramian’s iconic 2013 sculpture. This gives a double meaning to Déformation Professionelle: not only ‘professional deformation’, but also the ‘professional manipulation of forms’.

Headgear is the starting point for an intervention that appears to transform (déformer) the front part of the museum’s upper floor. In this way, we can see the front room as the mouth and throat cavity and the smaller rooms as cheeks. In the smaller rooms we see versions
of Scruff of the Neck, a series referring to teeth and metal dental prostheses, though here, subtitled Stopgap, all that is left are the metal supporting structures. They are hanging from the walls or taking cover in a corner.

The sculptural series Chin Up (First Fitting), mounted on the largest museum wall, traces back to such bodily organs as kidneys and livers. While organs are normally supported by our skeleton, in this case the form of the organs is suggested by supporting skeletal structures
which enclose them. The sculptures radicalise a few of the questions raised by this exhibition: When does an artwork ‘fit’ its intentions? When does it literally ‘function’? How does a ‘first fitting’ relates to a ‘final fitting’?

Making choices is a complex but essential stage in artistic thought and work. But in this exhibition Baghramian also shows us that its importance is relative. By refusing to show what exists and nevertheless reconsider it in the ‘new’, this exhibition connects to fundamental questions about progress and economy and asks when something ceases to exist, and how  something new comes into being.

Translated literally, the title of this work means ‘the shaping of the head’, and derives from the French term ‘fromage de tête’ or ‘head cheese’. The wordplay gives an immediate indication  of what’s going on here, which is the tension between the cerebral and the material in art. How are ideas formed and how do they relate to their material execution? Formage de Tête (Vitrine Rafraîchirée) (2016) consists of a table like a display case with rough white ceramic objects that are part of an alphabet of formal possibilities. They seem to stem from the related work Formage de Tête (Réchaud F + Réchaud G) (2011), which, like a mould, contained a number of negative forms.

The wooden frame of Fourth Wall (Proscenium) is placed on steel hooks on the wall. The hand-painted textile is reminiscent of the familiar striped motif used by the artist Daniel Buren, but, through the title and the folding-furniture look of the work, it takes on a domestic character.
In theatre, the ‘fourth wall’ is the imaginary wall between the audience and the actors, which separates the imaginary onstage world from the real world. The ‘proscenium’ is the space between the stage and the seats of the audience. Baghramian points towards non-spaces, imaginary or physical, and finally reduces the three-dimensional sculpture to a two-dimensional image that she suspends on the wall. In doing so, she touched on the core subjects of abstract painting (material, support, pictorial space etc.) and on the debate between Michael Fried and Robert Morris about the ambiguous theatrical quality of Minimal Art.

Privileged Points (2011) originally consisted of large open rings placed against the walls and on the floor of exhibition rooms. As a reaction to the routines and rituals involved with the installation of and looking at art, Baghramian used the rings to mark her ‘favourite places’ (privileged points) where artworks are traditionally presented in the exhibition space. At one and the same time she raised the question of whether the rings were artworks, simply markings or both at the same time. The rings are still recognisable as negative forms in the heavy plaster blocks that appear to have previously been used as moulds for casting. They appear like heavy plinths, almost like an ambiguous tribute to Privileged Points, one of the most well-liked works in Baghramian’s oeuvre. Rodin and Brancusi freed sculpture from the plinth and Carl Andre later defined this void as an artwork, but now Baghramian has again re-filled this void with objects. However, in this case the plinth no longer mediates between the real and the imagined space, but is a figure of speech which, just like the frame of Fourth Wall (Proscenium), can ironically be the announcement of an aesthetic experience.

Baghramian’s Jupon des Corps (2015) turns up in two different guises. For
Jupon Suspendu she has made the cones derived from the casting process into works of sculpture in wax and steel. They hang from the ceiling like tools in a butcher’s shop.

A second version of this work, Jupon Réassemblé, repeats the original form of the spidery sculpture held together by bits of steel. This work plays on the psychologically charged vocabulary of Louise Bourgeois’ spider sculptures and re-examines 20th-century topics from a 21st-century angle, whereby ‘network’ and ‘interconnection’ appear to be the most relevant factors.

Jupon Réassemblé is the final artwork exhibited inside the museum. Here we encounter something like a skeleton, a notion which in the past we associated with the architecture of the museum, but which here may represent the radical way Baghramian liberated her own work and reduced it to a supporting structure around which, as it were, she built a prosthesis in the form of this exhibition. It was therefore built into two spaces: the fictive space around parts of her oeuvre, and the architectural space of S.M.A.K. The exhibition expands fully in a way comparable to the cardiac rhythm of diastole and systole. It will be challenging to see to what extent this will change as the exhibition tours.

Courtesy of the artist and S.M.A.K.