Almost everybody knows the iconic image of French artist Yves Klein suspended in mid-air, during his famous “Le Saut dans le Vide” (the Leap into the Void). Less people know that this photomontage was made in October 1960, when Klein jumped from the rooftop of his art dealer’s house at Rue Gentil-Bernard in Fontenay-aux-Roses, Paris. Probably nobody knows that a church, the Chapelle de Sainte Rita – advocate of desperate cases – for whom Klein made an ex-voto during his life, now replaces the house where the picture was shot.

But how and why did Yves Klein jump from a rooftop? Yves Klein had been practicing judo his whole life and considered it to be part of his artistic path.  At age 25 he had received a black belt – 4th Dan, a remarkable achievement for a westerner at that time. Klein spent the next two years teaching Judo in Japan and even wrote a book about the sport: “Les fondements du judo.” Now, if there is one thing you learn practicing judo, then it is how to fall. However, a jump from a rooftop would injure even the most trained judoka.
This is where the photomontage comes in. Klein asked photographers Harry Shunk and Jean Kender to make a series of pictures documenting his jump. In the original photographs, we see seven people holding a tarpaulin for Klein to land in. These people are friends of the artist and fellow judokas from the judo school a bit further down the street. The negative of the picture of Klein leaping was printed together with another negative, depicting the empty surrounding street, to create the seamless “documentary” photograph we all know. There are two different versions of the photograph: one with a cyclist driving away in the background and another one, slightly darker, where the street is completely empty. 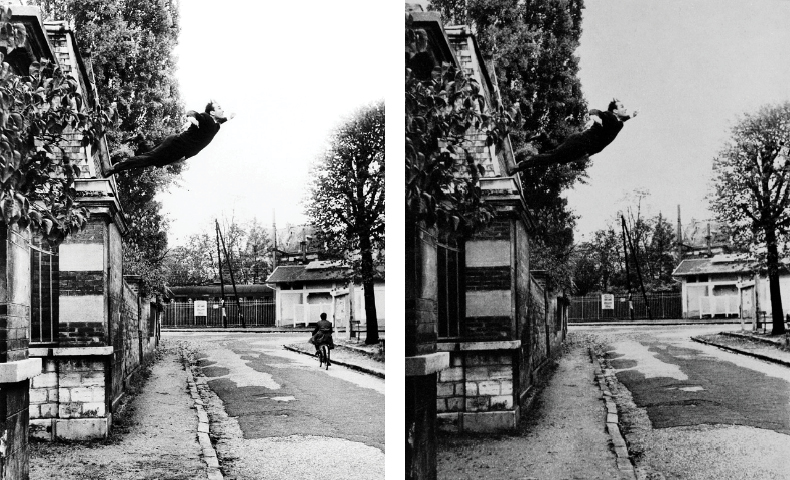 Klein used the photograph with the cyclist on the first page of his publication “Dimanche – Le Journal d’un Seul Jour” (Sunday – The Newspaper for Only One Day), which was sold in newsstands throughout Paris on Sunday, November 27th 1960. In this newspaper, Klein outlines his own theory for a “Theatre du Vide” (Theatre of the Void), in which he emphasized that theater could no longer be synonymous with representation or spectacle. Klein’s theater was a spectacle enacted without actors, without stage design, without a stage, without an author and without an audience. The theater of the future was, for Klein, an empty room: the theater of the void.

This dematerialization of art is characteristic of Klein’s oeuvre. Klein can be considered as one of the first artist to develop conceptual strategies. For “Le Vide” (The Void) Klein emptied an entire exhibition space, painted it white and then persuaded the French government to send Republican Guards to stand outside as sentries at the end of a hallway painted ultramarine, covered with blue curtains to ensure there would be no way of anticipating the gallery’s contents. Anyone who didn’t have an invitation was charged 1,500 France franks entrance fee (about €220, a fortune in 1958).

With “Zone de Sensibilité Picturale Immatérielle” (Zone of immaterial pictorial sensibility) Klein took the idea of dematerialization even further. This work involved the sale of documentation of ownership of empty space (the Immaterial Zone), taking the form of a check, in exchange for gold. If the buyer wished, the piece could then be completed in an elaborate ritual in which the buyer would burn the check and Klein would throw half of the gold into the Seine. 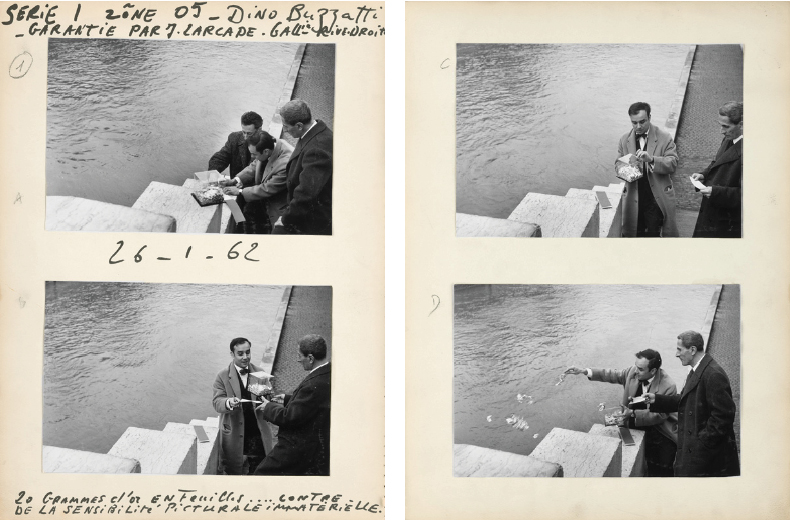 A lot of his fascination for dematerialization could be traced back to one summer day on the beach in Nice. In the summer of 1946, three friends chose to divide the world between them: Armand got the land and its riches, Claude Pascal got the air, and Yves Klein got the sky and its infiniteness. In his Chelsea Hotel Manifesto (1961), Klein writes: “In 1946, while still an adolescent, I was to sign my name on the other side of the sky during a fantastic “realistico-imaginary” journey. That day, as I lay stretched upon the beach of Nice, I began to feel hatred for birds which flew back and forth across my blue sky, cloudless sky, because they tried to bore holes in my greatest and most beautiful work.”

With his “Le Saut dans le Vide” Klein finally managed to establish a harmonic – and aesthetic – relationship between him and the air.

If you are interested in the work of Yves Klein, and want to learn more, be sure to visit the Yves Klein Archives.