My Bed is probably the most notorious work in the oeuvre of British artist Tracey Emin (°1963). First shown in 1998 at the Toyko’s Sagacho Exhibition Space, and in New York’s Lehmann Maupin gallery the subsequent year, My Bed became best know through an exhibition at Tate Modern in 1999 as one of the shortlisted works for the Turner Prize. Because of its appearance, the work immediately gained much media attention and caused a lot of debate. 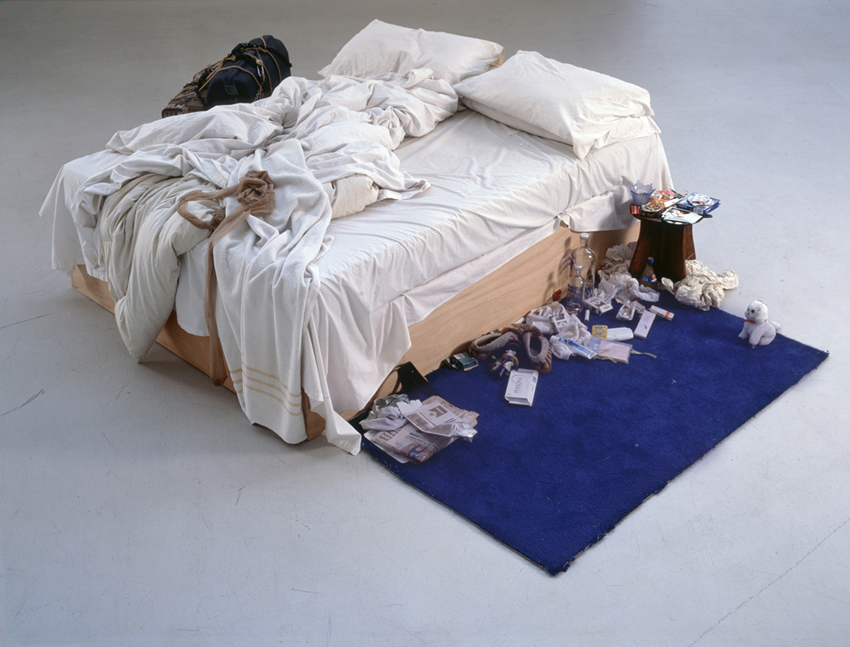 My Bed consists of the artist’s real, wooden bed – with wrinkled sheets, pillows and twisted blankets, but also with tangled nylon stockings and crumpled towels. Strewn around the bed is a clutter of personal effects: empty vodka bottles, slippers and underwear, crushed cigarette packs, a snuffed out candle, condoms and contraceptives, a cuddly toy and several Polaroid self-portraits. Emin presented her bed exactly how it looked like during a difficult period in her life. In an interview with Julian Schnabel, Emin ellaborates: “I had a kind of mini nervous breakdown in my very small flat and didn’t get out of bed for four days. And when I did finally get out of bed, I was so thirsty I made my way to the kitchen crawling along the floor. My flat was in a real mess- everything everywhere, dirty washing, filthy cabinets, the bathroom really dirty, everything in a really bad state. I crawled across the floor, pulled myself up on the sink to get some water, and made my way back to my bedroom, and as I did I looked at my bedroom and thought, ‘Oh, my God. What if I’d died and they found me here?’ And then I thought, ‘What if here wasn’t here? What if I took out this bed-with all its detritus, with all the bottles, the shitty sheets, the vomit stains, the used condoms, the dirty underwear, the old newspapers- what if I took all of that out of this bedroom and placed it into a white space? How would it look then?’ And at that moment I saw it, and it looked fucking brilliant. And I thought, this wouldn’t be the worst place for me to die; this is a beautiful place that’s kept me alive. And then I took everything out of my bedroom and made it into an installation. And when I put it into the white space, for some people it became quite shocking. But I just thought it looked like a damsel in distress, like a woman fainting or something, needing to be helped.”

Tracey Emin belongs to the Young British Artists (YBA) movement, a group of artists who began exhibiting in London in the late eighties. Many of them were initially supported and collected by Charles Saatchi, an important collector of contemporary art. Other known YBA are Damien Hirst, Liam Gililck and Sarah Lucas.

Emin’s oeuvre ranges from painting, drawing, video and installation to photography and sculpture and is highly shaped by her own life events, re-invigorating the connection between art and life. This becomes especially clear in her installation My Bed, but also other closely related work such as Everyone I Have Ever Slept With, 1965-1995 ­­– which was unfortunately destroyed in a warehouse fire in 2004.

My Bed was bought by Charles Saatchi at the 1999 Lehmann Maupin Gallery exhibition, and was displayed as part of his collection. In the subsequent years it travelled all across Europe (and even Australia) for exhibitions, until a German businessman and art collector bought it in 2014 for over £2.500.000. One year later he gave the work as a long-time loan to the Tate, where it is now part of the display of the Tate’s permanent collection.