There are many things that catch one’s eye when looking at The Destroyed Room, one of the first important works by Jeff Wall. As the title evidently describes, the image shows a ravaged room, with a wrecked mattress in the centre, surrounded by woman’s shoes, clothes and other accessories scattered around. Even a piece of the wall is torn down. And there is something else – joists and an external wall on the left side of the image are visible, indicating that the picture was not taken in an actual room but in a studio. Suddenly one not only questions what could have happened in the room, but also wonders what is happening behind the scenery. 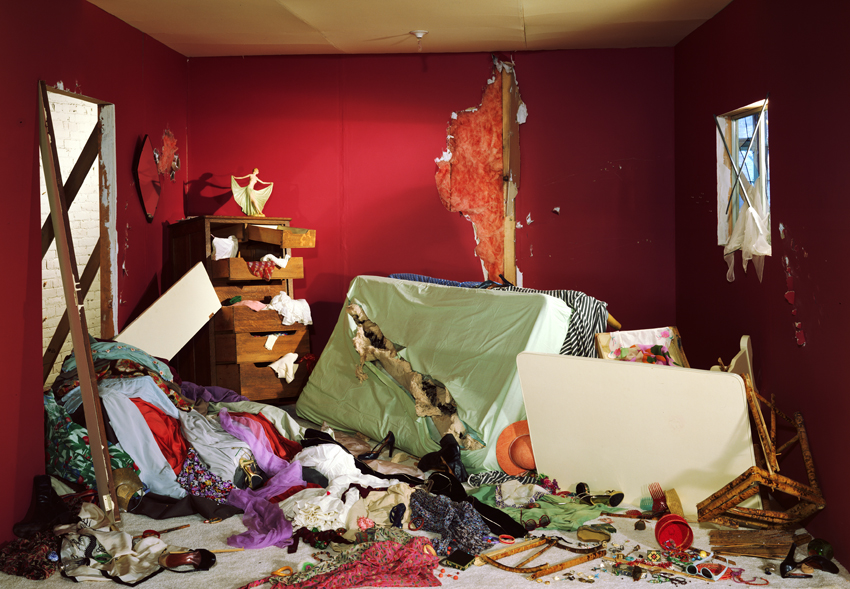 The Destroyed Room is an excellent example of the layeredness in Jeff Wall’s entire oeuvre, not only questioning the photographic image but referring even to 19th century paintings. The work of Canadian artist Jeff Wall is immersed in art history, criticism and theory but also has its impact on contemporary art. Connections can be made from Wall’s work to conceptual artists such as Ian Wallace, Rodney Graham or Stan Douglas; as well as to artists that specialise in staged or set-up photography like Cindy Sherman, Thomas Demand or Gregory Crewdson; and even to classic photographers such as Ansel Adams, Edward Weston, Walker Evans and Diane Arbus.

Wall’s works are carefully staged and contain a lot of references, but are at the same time very accessible. With the use of transparencies mounted on lightboxes he refers to both cinema and commercial signs of consumerist culture. Through these materials and techniques, Wall has often been linked to minimal artists such as Dan Flavin, who is famous for his sculptural objects and installations using fluorescent lights.

The Destroyed Room is Jeff Wall’s first image presented as a transparency in a lightbox. It is inspired by Eugène Delacroix’s 1827 painting The Death of Sardanapalus, which is on permanent view at the Louvre in Paris. Delacroix conveyed his critique on the French bourgeoisie in the post-Napoleonic era through the allegorical story of the cruel Sardanapalus, the last king of Assyria. In the painting the Assyrian monarch is presented on his deathbed, commanding the destruction of his possessions and slaughter of his concubines to provoke invading armies.

But how are Delacroix’s painting and The Destroyed Room connected? A lot of elements in The Death of Sardanapalus were left out of the frame in Wall’s work. In The Destroyed Room there is no direct nudity or sexuality, in fact there is no human presence at all. Wall created an image of a crime scene, showing destruction after a violent event. Only traces remain: the red walls are vandalized, the mattress is slashed, and objects and clothes are sprawled all around. The only thing left intact in the destroyed room is a small porcelain dancer figurine, on top of the cupboard. Just like a dove – flying over a battlefield in a war scene – she merely overviews the scenery. It is most of all Delacroix’s composition that Jeff Wall echoes: in both works a diagonal line from upper left to bottom right creates a balance and rhythm. And like Delacroix, Wall too chose for a prominent red color palette, suggesting passion and supporting the chaos in the scene. 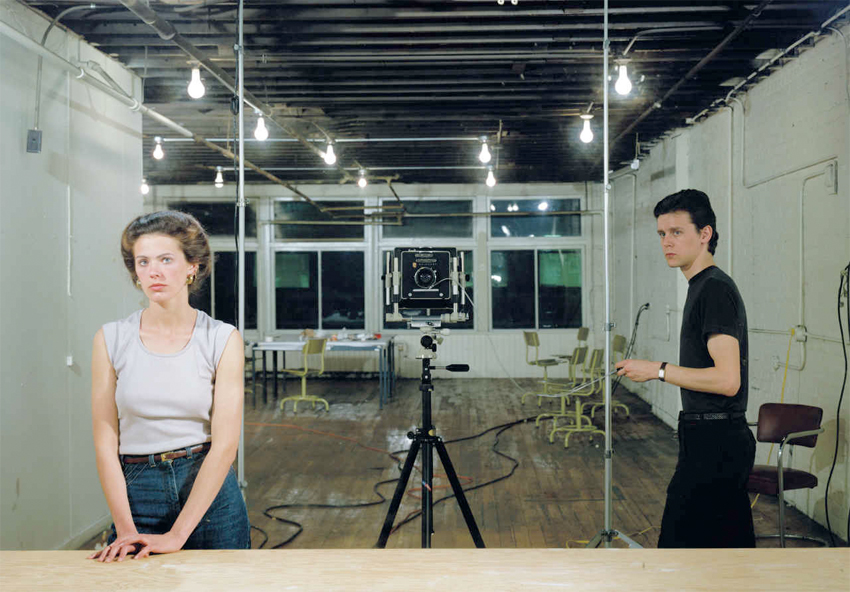 Jeff Wall often discusses the significance of the studio to his work as a photographer. Nonetheless, the deliberate exposure of the studio is not so frequent in his oeuvre. Only in his first two staged photographs –The Destroyed Room and Picture for Women – the studio literally comes in the picture. It gives the image a notion of volume, especially when combined with its presentation in a lightbox, which takes on a sculptural presence. Seeing The Destroyed Room on a computer screen, or even printed in a book, does not do it justice. Like most of Jeff Wall’s works, The Destroyed Room is not a small picture. Its large size and presentation in a lightbox impact the viewer’s physical sense of orientation, compelling him or her to dive into the work even more. But looking at the image does not and will never reveal what might have happened in the room. As viewer, one can only speculate on the sequence of events.